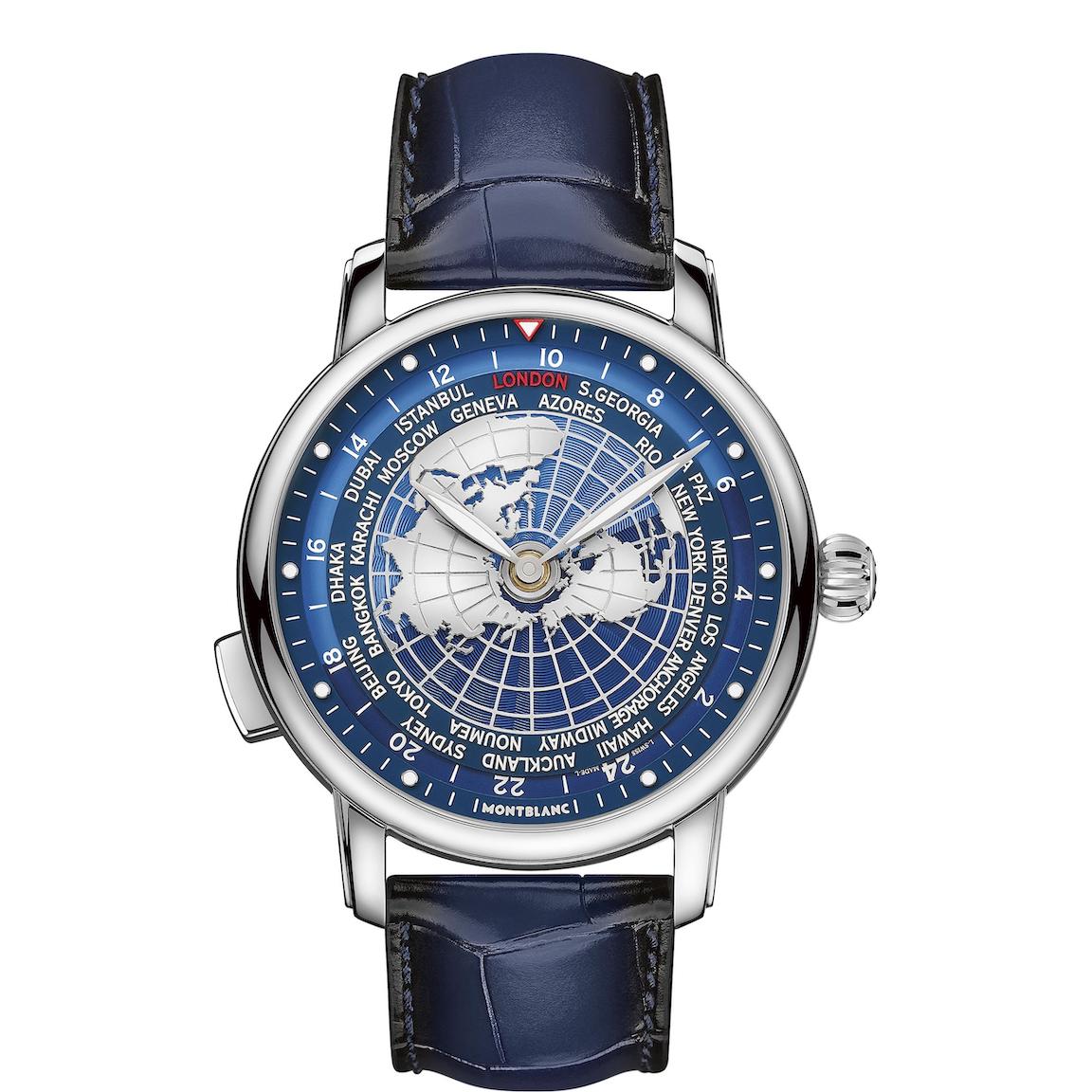 The Montblanc Star Legacy product line takes its inspiration from Minerva’s heritage and the company’s pocket watches, made during the late 19th and early 20th centuris.

Montblanc is a master at interpreting and displaying watch information on its dials in a beautiful and informative manner. The newest Star Legacy Orbis Terrarum watches are no exception. The two new Montblanc Orbis Terrarum watches (originally launched in 2014) continue to boast a sophisticated world time complication – but feature totally re-designed dials.

The new watches also feature some of the brand’s classic signatures, including onion-shaped crowns with the Montblanc emblem on it, incredibly refined dials and Sfumato alligator leather straps made at the Pellatteria in Florence, Italy. The stainless steel model is now offered with a stunning blue dial, while an 18-karat rose gold limited-edition (500 pieces) version boasts a chocolate brown dial. 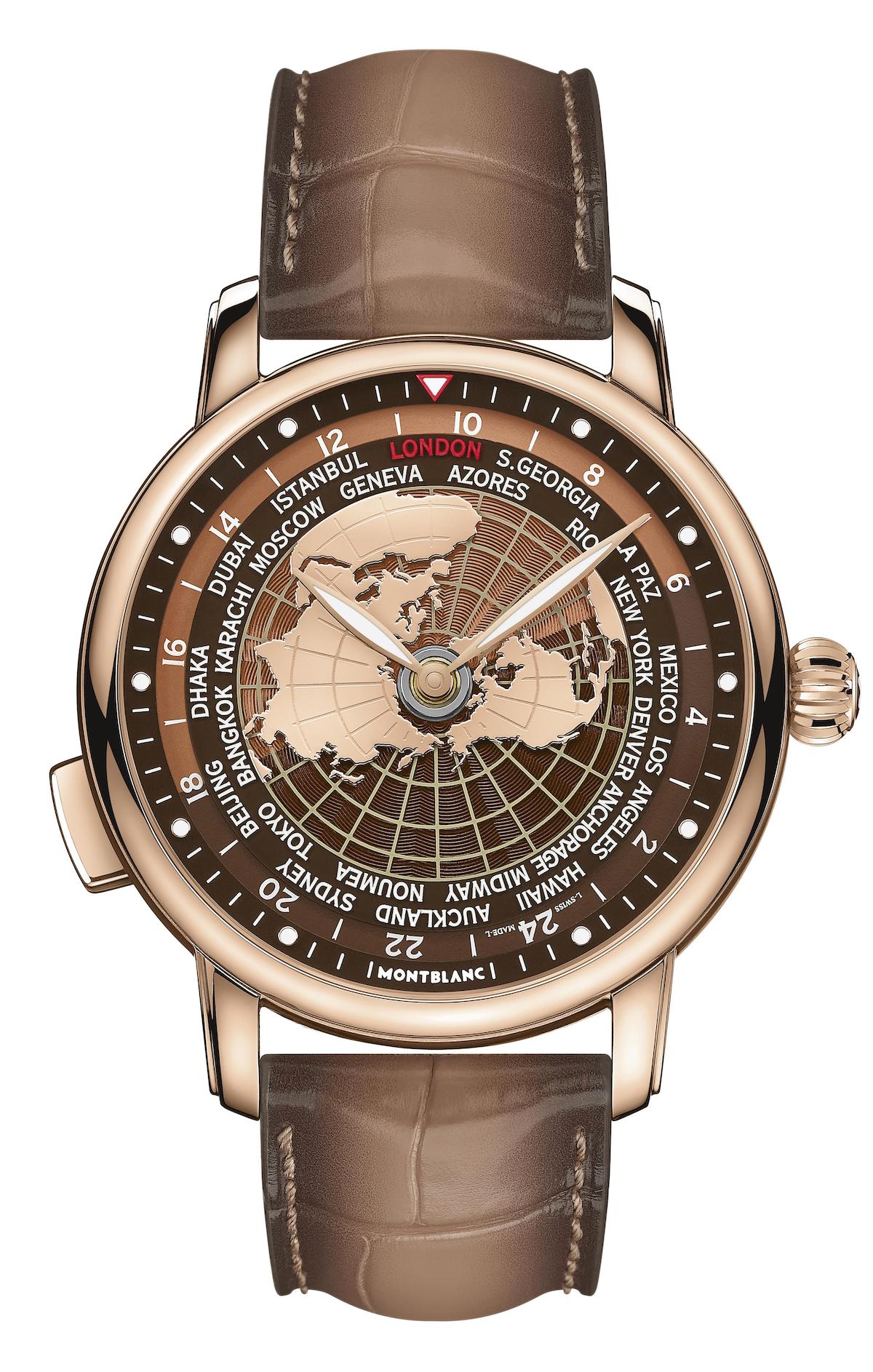 Like its Latin name “terrarium” suggests, the watch is all about the globe. Each dial features a finely etched world map on the dial (as seen from the North Pole), complete with geometrical lines and circles meant to emulate longitude and latitude.  The map is constructed using an upper rotating sapphire disk that has a rhodium (for the blue version) or rose gold metallic coating (for the brown version) applied to it. This makes the Northern Hemisphere continents and the meridians stand out above the oceans for a more three-dimensional appeal. The ocean portions of the map feature a wave pattern achieved using a special flinque-froisse’ guilloche technique.

The map is surrounded by a dark blue or brown chapter ring  that lists the 24 main cities of the world’s time zones in white. That ring is then flanked by an outer chapter ring (a rotating disk) with the 24-hour indication on it in light and dark blue (or brown) for day/night indication in all of the zones. A red-tipped triangle at 12:00 points to the local time zone. The hands and minute dots feature Super-LumiNova coatings for easy reading at night. 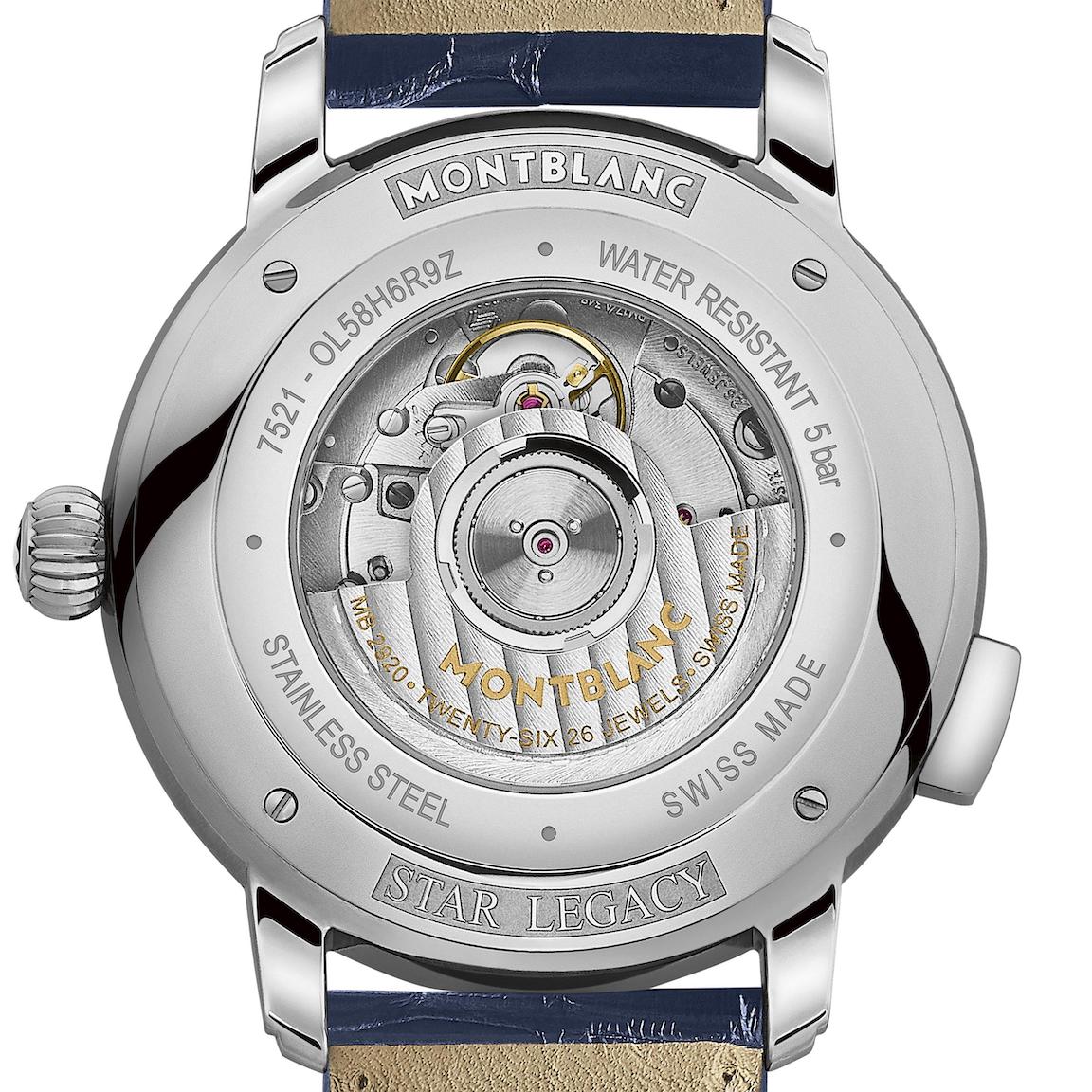 Montblanc Star Legacy Orbis Terrarum is powered by a mechanical automatic movement made in house.

The beautiful Terrarum is powered by an in-house movement that offers an easy-to-use world timer and that is intuitively easy to read. In this piece, once the watch is set, it indicates all 24 time zones at a glance and shows if it is day or night in that region. This is all read off of the two outer chapter rings. The watch is set via a single pusher at 8:00 on the case:  Position 1 winds the watch, position 2 adjusts the hour hand that jumps in one-hour increments, Position 3 adjusts the hours and minutes at the same time.

The new Montblanc Star Legacy Orbis Terrarum world time zone watches measure 43mm in diameter and feature a transparent sapphire crystal on the case back for viewing of the in-house-made automatic Caliber MB M29.20 with world time complication and day/night indication. Water resistant to 50 meters, the steel version is a steal at $6,800, and the rose gold version  — at $20,800 — is not too highly priced for the complication and detailed dial.