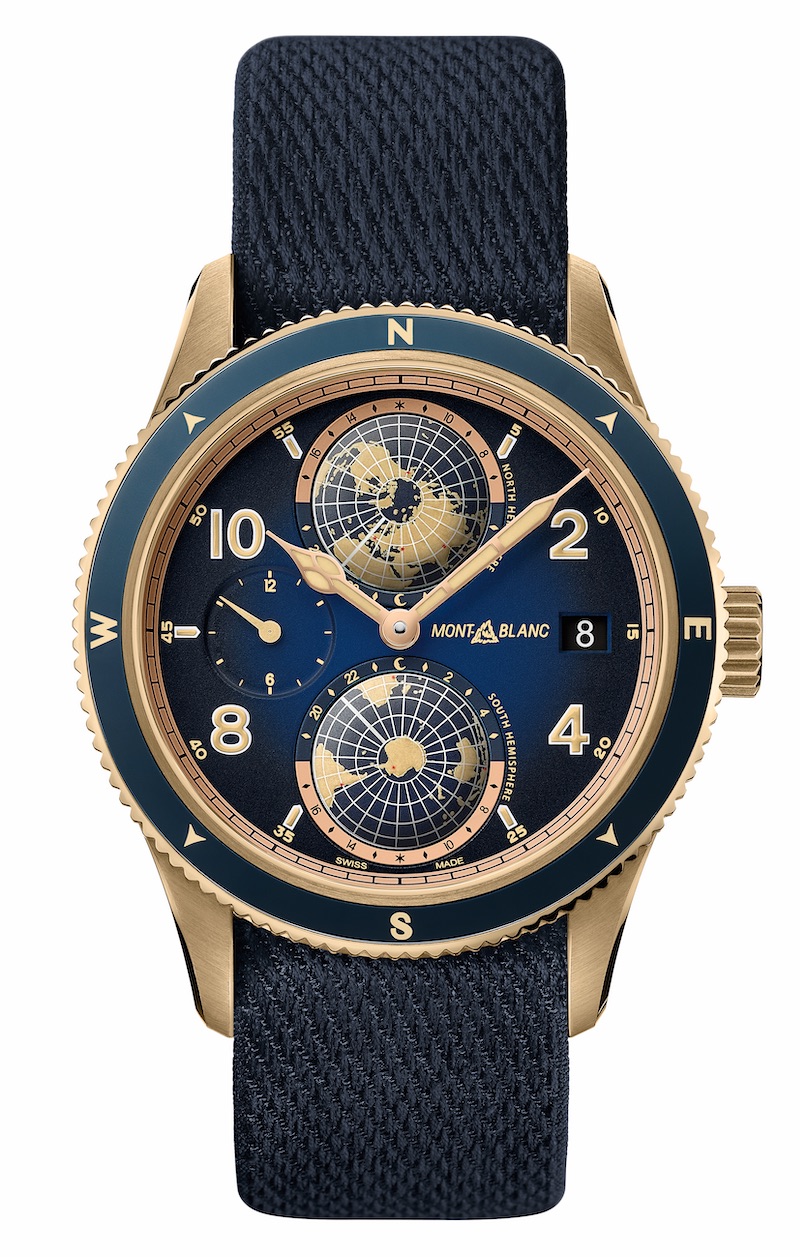 It was two years ago in 2018 that Swiss watch brand Montblanc introduced its first 1858 Geosphere watch, with northern and southern hemispheres on the dial. In fact, the brand unveiled a host of watches that year geared toward those who love the great outdoors, and has continued in that domain. Now, Montblanc partners with legendary explorer and mountaineer Reinhold Messner to support his foundation and to underscore its commitment to active lifestyles. The brand even unveils an all-new limited edition 1858 Geosphere Reinhold Messner watch to celebrate.

The 76-year-old Reinhold Messner is an early Italian explorer who has conquered Everest multiple times and, in 1978, was the first to summit the mountain without the assistance of supplemental oxygen – a feat doctors and scientists of the time said was impossible. He went on to make the first-ever solo climb of Everest and was the first to complete the summiting of all 14 peaks over 8,000 meters (26,200 feet) above sea level. He was the first to cross  Antarctica and Greenland on skis without the help of dogsleds, and he has crossed the Gobi Desert alone. In fact, his climb record is so impressive that he created his version of the Seven Summits list, substituting one more difficult mountain to climb than Indonesia’s Puncak Jaya that is on the Seven Summits list. Messner’s List includes Mount Kosciuszko, instead. 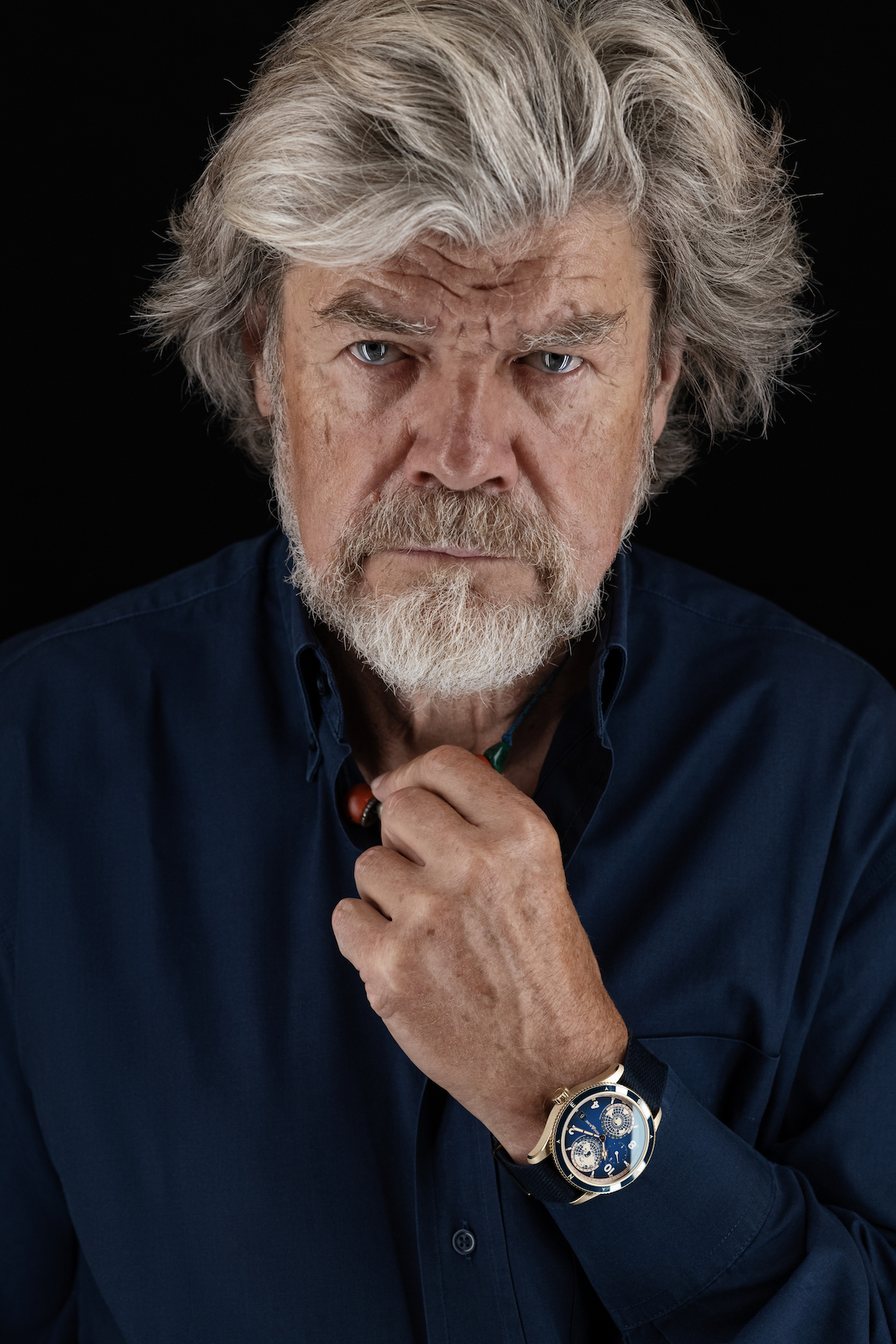 In addition to holding nine World’s First titles in the Guinness Book of Records, Messner has  also authored dozens of books about his experiences (including one controversial climb during which his brother died and Messner suffered debilitating frost bite eventually leading to the amputation of seven toes. Many of those books have been made into movies, interpreted in documentaries, and more. It was in the mid-2000’s that he founded the Messner Mountain Foundation to “help for self-help.” The Foundation provides necessary resources to help with survival of locals in the mountains of the Himalayas, Andes and others. It has even built a school for 50 children in the Diamir Valley in Kashmir, Pakistan, where he had been rescued by the locals  in 1970 after his brother died. In fact, this harrowing crossing of the Nanga Parbat and his brother’s death was the subject of his book, The Naked Mountain.

For Montblanc, partnering with Messner to celebrate his legendary life, his accomplishments and his giving back to the mountaineering world as he is today, was an incredible coup. To begin with, Montblanc has partnered with the   Messner Mountain Foundation and is donating its support the children’s educational programs.  Additionally, to celebrate Messner, the brand has created a limited edition 1858 Geosphere watch. The donation the brand is making to the Foundation is independent of the new timepiece and has nothing to do with the sale of these watches. 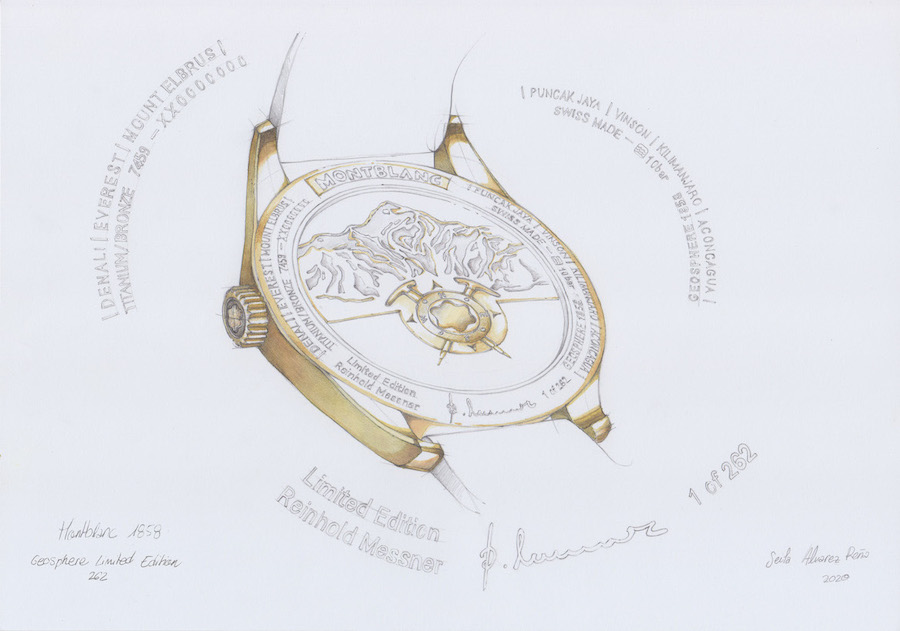 The Montblanc 1858 Geosphere Reinhold Messner Limited Edition watch is, first and foremost, a world time watch. Its mechanical movement offers features and functions that include date, second time zone indication, turning northern and southern hemisphere gloves and a 24-hours scale for day/night indication.  The watch is powered by an in-house movement, Caliber MB29.25 with automatic winding and 42 hours of power reserve. The 42mm bronze case features high-polished and satin finishes and boats a  bi-directional bronze bezel with blue ceramic insert with the cardinal points engraved on it and coated with Super-LumiNova.  In fact, almost the entire watch is visible in the dark thanks to special Super-LumiNova coatings. The colors also glow in different hues to make things like the compass points more distinguishable.

Making the watch particularly personal, it features red dots on the hemisphere globes to mark the world’s Seven Summits, as well as the Mont Blanc mountain. Even the case back boasts a spectacular engraving of the Seven Summits, as well as the complete Messner’s List, an image of the Mont Blanc mountain, a compass, two icepick axes and Messner’s signature. In all, the case back is a deft blend of Messner and Montblanc. Water resistant to 100 meters, the watch boasts a gradient blue dial and is finished with a blue NATO strap that has been specially made  on manual looming machines and are light weight and quick drying. The straps are actually produced according to Montblanc’s directive in the Julien Faure workshops in France. 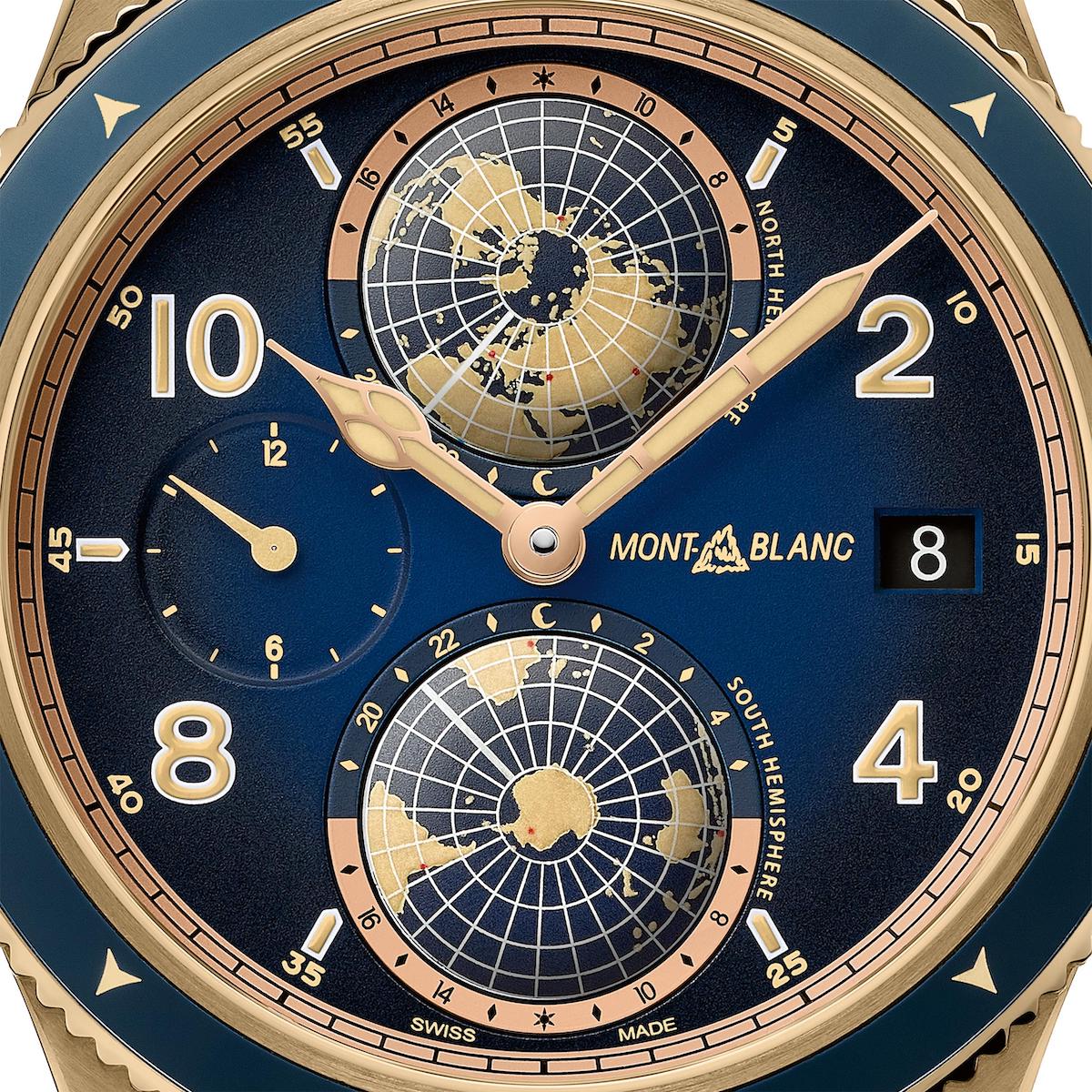 The 1858 Geosphere Reinhold Messner watches are being created in a limited edition of 262 pieces – a nod to the mountains Messner climbed that were more than 26,200 feet high. The watch is available in Montblanc boutiques as of today and retails for $6,100.

According to Nicolas Baretzki, CEO of Montblanc,  Reinhold Messner embodies the values we want to highlight with our Montblanc 1858 product line and the Spirit of Exploration. He is a living legend of outdoor exploration and mountaineering. With his fearless spirit and irrepressible sense of determination, he is seeking to make his mark in the world, being a source of inspiration for adventurers across the globe.” Baretzki also says the brand is proud to partner with the Messner Mountain Foundation “that stands up for remote communities who are often overlooked, helping students gain the necessary education to live a self-sufficient life. Not only is Messner an inspiration to so many for his pioneering ascents of the world’s highest peaks, he inspires us with his relentless commitment to the wellbeing and development of others.” 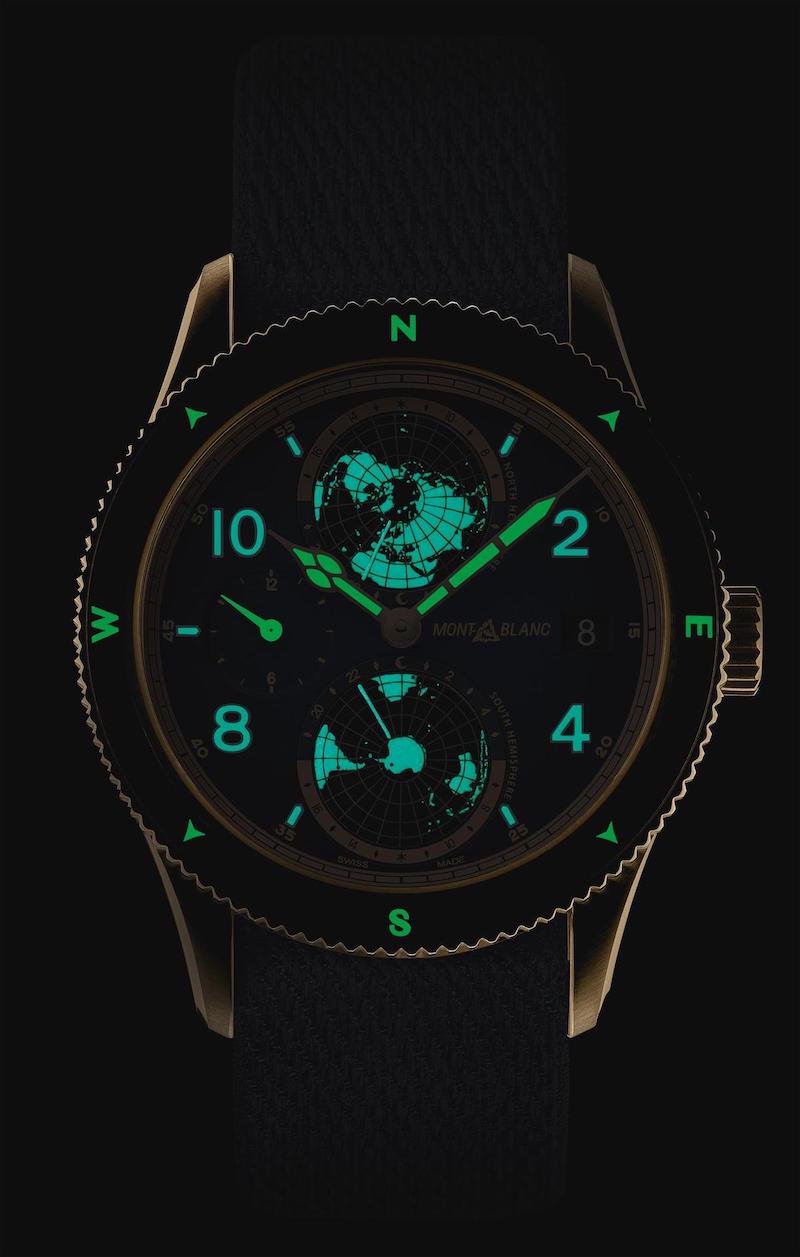 (*This article by Roberta Naas was originally published on her Perfect Timing column on Forbes.com a few days ago.)