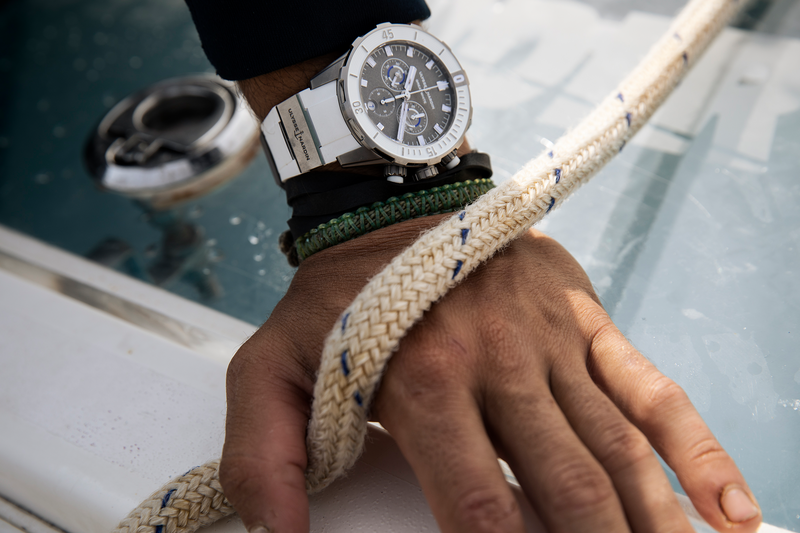 It’s a mind-boggling answer to me, but the question is:  If you had your leg bitten off by a shark would you then advocate to save the sharks? Mike Coots, who lost his right leg during a tiger shark attack while he was bodyboarding, answered yes to that question. A new friend of the Ulysse Nardin brand, Coots says he advocates to save sharks because he understands the need for a balanced marine ecosystem. He also understands that sharks are among the most misunderstood creatures in the sea. 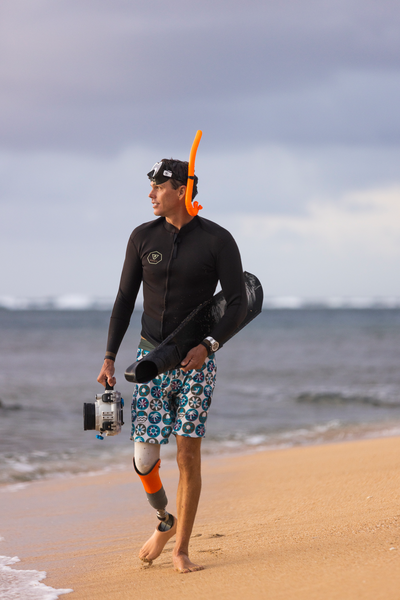 Mike Coots lost his right leg to a shark attack in Hawaii. Today, he is a marine photographer and an advocate for saving sharks.

Similarly, Ulysse Nardin, a brand with a long maritime history, is devoted to shark conservation and the oceans. This year, in honor of these sea creatures and perfectly timed with Shark Week, Ulysse Nardin pledges to support 1% For The Planet organization by donating 1 percent of annual sales of all of its shark watches to support non-profit organizations focused on sharks. It also partners with SharkTrust, which works to reform unsustainable fisheries and reform supply chains that propel the consumption of shark products. The brand’s newest Diver Chronograph Great White 44mm Limited Edition watch will also help with these initiatives via sales and proceeds donations. 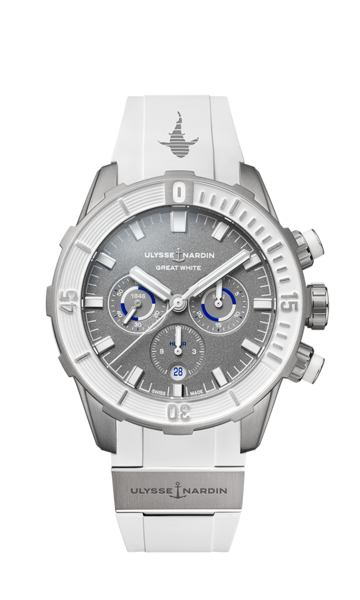 It was a dozen years ago in 2010 that Ulysse Nardin unveiled its first Diver Hammerhead shark. Eight years later, the brand adopted the shark as is emblem and as the key player in its advertising campaign. Since then, it has launched multiple versions of its shark-inspired divers watches, with the 2018 unveiling of the Diver Great White watch rapidly selling out.

Now, the brand releases the new Diver 44mm chronograph watch that is bold yet beautiful. In a white color scheme, the watch is crafted of sandblasted, satin-finished titanium and features a white unidirectional rotating rubberized bezel and matching rubber strap. Aesthetically pleasing, the watch boasts a gray dial that recalls shark skin and offers blue and white accents. Even the words “Great White” adorn the dial. The silhouette of the shark appears on the white rubber strap and, in the dark, lights up thanks to the luminescence injected into it. 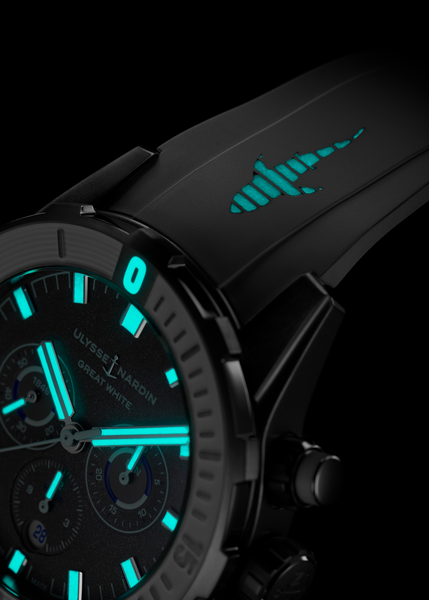 Powered by the Caliber UN-150 self-winding mechanical movement with Silicium technology for the escapement wheel, anchor and balance, the watch offers stop-watch chronograph functions including a 30-minute counter, a 12-hour counter and a small seconds counter. Additionally, it provides the date indication. It is water resistant to300 meters and is being created in a limited edition of just 300 pieces. It retails for $13,300.

The population of sharks in our ocean is currently suffering from overfishing and many species are endangered. Top predators, sharks are a vital part of the underwater ecosystem and provide economic security for many global communities.

Ulysse Nardin is no stranger to shark conservation. The brand has supported a host of related causes over the years and even got to name a young female Great White shark tagged in Massachusetts via Ocearch. Andromache, as the brand named her, is Ulysse Nardin’s first official shark ambassador. She can be tracked here. 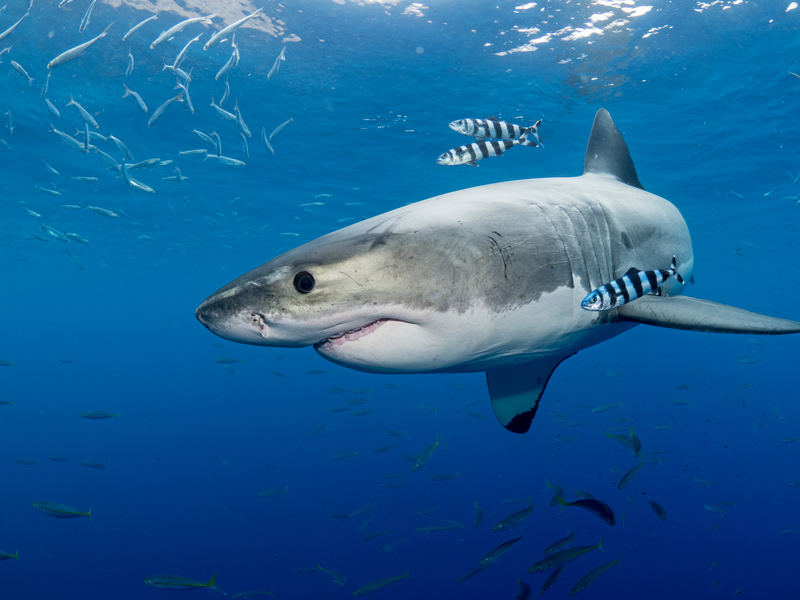 Ulysse Nardin has a live shark as its first shark brand ambassador and supports shark conservation.

Ulysse Nardin supported  a shark tagging campaign a few years ago by partnering with the Acores University and free diver Fred Buyle. In 2020, it entered into the aforementioned intriguing partnership with Ocearch, which aims to track sharks, tag them and share information about their vital environmental contributions.

This Swiss watch brands is one of the first to really understand the plight of the shark and to support its preservation. By teaming with Mike Coots, who has turned tragedy into triumph and has become a top underwater photographer and supporter of shark preservation, Ulysse Nardin continues to contribute to the cause of saving sharks.

This article by Roberta Naas first appeared in her column on Forbes.com.