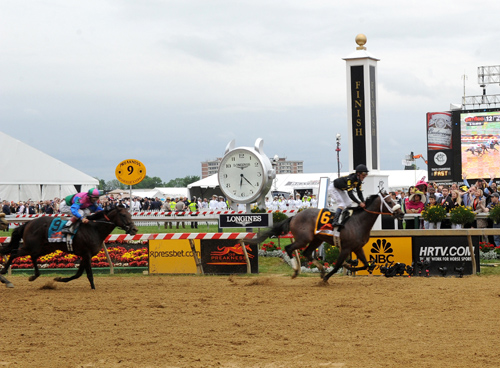 Oxbow races by the Longines clockat the finish line of the 138th running of the Preakness STaesk yesterday. (photo: Diane Bondareff/Invision for Longines/AP Images)

Yesterday in Baltimore, the prestigious 138th Preakness Stakes took place—the second leg in the 2013 Triple Crown. While Orb had won the Kentucky Derby earlier this month, yesterday, Oxbow took the win – upsetting the chance for a Triple Crown win in Belmont. Oxbow led the race from start to finish in Preakness, and it represented the 6th victory for Hall of Fame trainer D. Wayne Lukas an 15th Triple Crown victory (the most in horse racing history). Orb finished fourth after startin on the rail position. 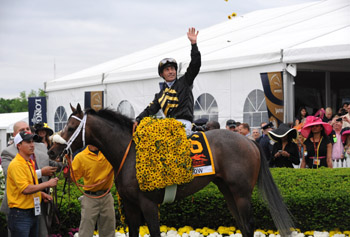 There to time all three races is Longines, the Swiss watchmaker known for its famous timepieces. As the Official Watch and Timekeeper of the events, Longines has a visual presence at the tracks with clocks and a digital Longines countdown clock. The brand also presents watches to the owner, trainer and jockey of the winning horse.

In fact, the Maryland Jockey Club announced a long-term partnership with Longines that includes naming Longines as the Official Timekeeper and Watch of the Preakness Stakes, as well as the title partner in the Longines Dixie Stakes, and the presenting partner of the International Pavilion. 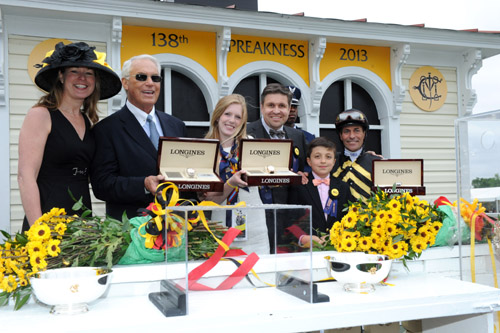 Longines president Walter von Känel said. “This new partnership reinforces our commitment to equestrian sports in the US and reflects our devotion to and passion for these exciting sports, which match perfectly with our core values of elegance, tradition and performance.”