Jacob & Co Goes to Extremes with the new Xtreme Tourbillon 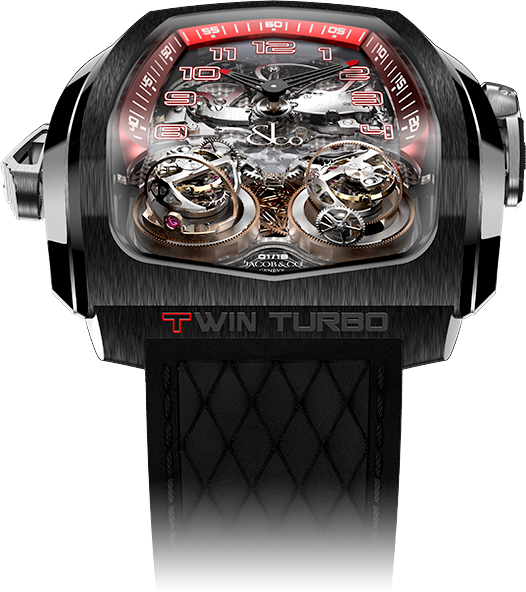 It isn’t everyday that a watch brand pulls out all the stops in creating an over-the-top technical timepiece, but Jacob & Co. seems to go the distance with the new Xtreme Twin Turbo Triple Axis Tourbillon Minute Repeater (Yes, it is a mouthful), the new Xtreme Tourbillon from Jacob & Co will have you doing a double take.

The watch is a world premiere timepiece that offers not just one triple-axis tourbillon, but two — side by side on the lower portion of the engine-shaped watch. Additionally, the double Triple-Axis tourbillon is equipped with a repeater system that chimes the hours, 10-minute segments and minutes. It accomplishes this musical feat with two hammers. A double mechanical safety feature is in place during the chiming sequence to ensure the movement is not accidentally pushed again and damaged.

The movement made exclusively for Jacob & Co. features a regulator between the two triple-axis tourbillon carriages. As to the twin tourbillons they each feature three axis: 1 flying in 40 seconds, one flying in three minutes, and one flying in eight minutes for a beautifully orchestrated dance of rhythm and undulation.

The manual-wind JCFM01 caliber, with 572 parts, was two years in the research and development stages, and when it comes time to assemble each watch, one watchmaker is designated to assemble the two triple-axis tourbillons – over a two-week time period.   A second watchmaker then spends four weeks’ time building the Decimal Minute Repeater portion of the watch. Another 3,000 hours of machining and 300 hours of decoration – by a team of 20 expert artisans – brings the timepiece to fruition.

The watch itself is an extraordinary shape that resembles a racecar engine in cushion-corned inverted triangular-like shape. The watch offers 72 hours of power reserve and features a flywheel regulator. It is an incredible sight to see and presents an even better look on the wrist.