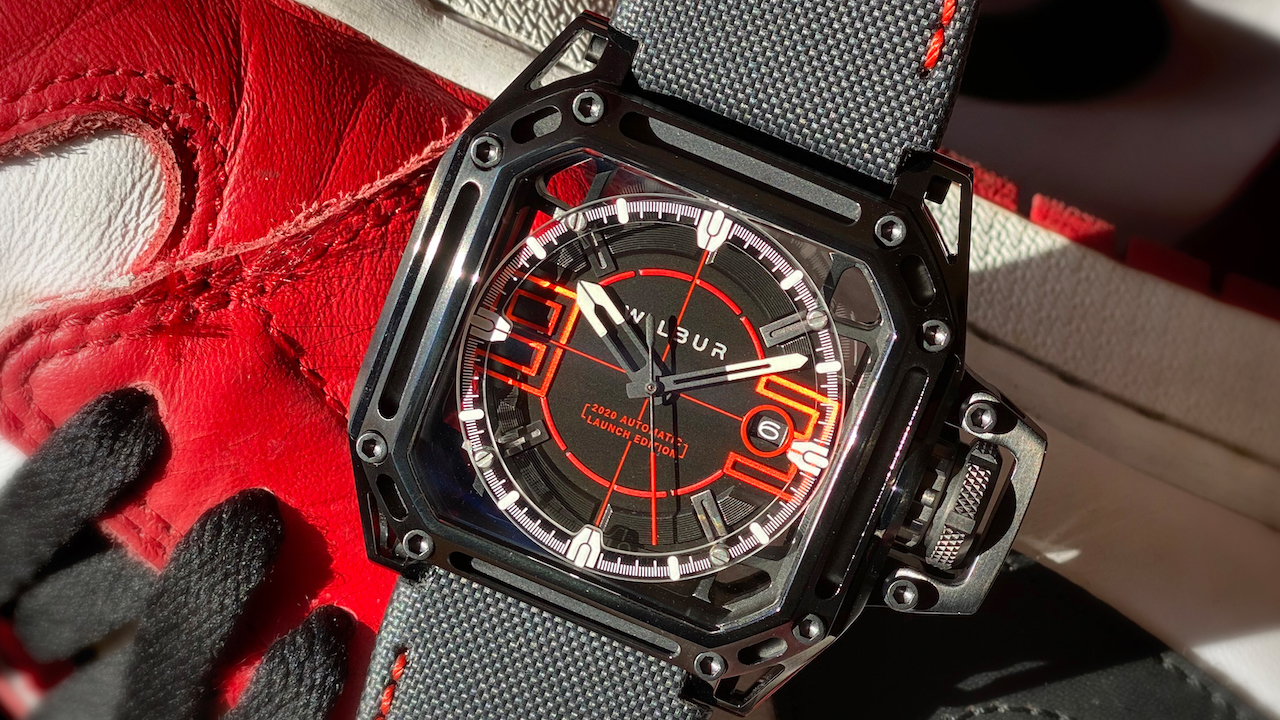 It may be 2021, but that doesn’t stop us from looking at some great watches that were unveiled in 2020 and that are on the market now, especially when they are truly exciting pieces. Such is the case with the newest Wilbur Watches Launch edition. Jason Wilbur, designer extraordinaire who has designed everything from concept cars unveiled by Honda to an award-winning oceanic research drone, is no stranger to designing watches. He is credited as the designer behind the once-famed Devon watch and behind several other special edition watch collaborations, including one seven years ago with 2(X)ist. Now, he has designed his own line of timepieces, with the first edition aptly named Launch. 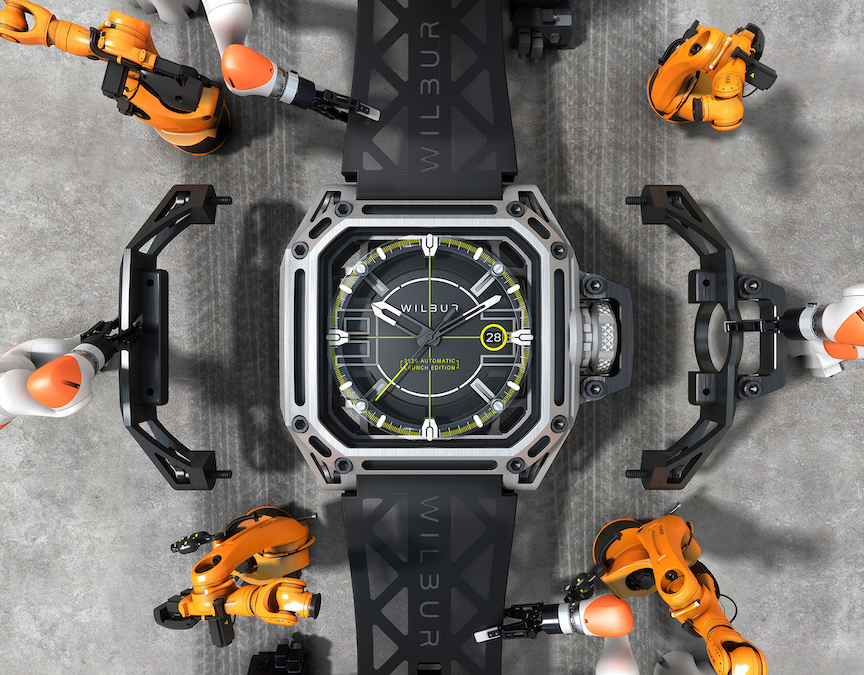 I’ve known Jason Wilbur since he created the Devon watch a few decades ago, and he has a real passion for regularly pushing the limits of design and engineering. Devon watches, after all, were a marvel of their time, using mechanical belts to indicate the time instead of hands. The award-winning Wilbur wanted to pull all the stops out when it came to his own watch. His goal in all he designs: creativity, breaking the rules, challenging the impossible when it comes to design.

A California native, Wilbur’s factory, or “speed shop” is located in Southern California. There, the design, research and development, assembly and finishing (as well as after-sales service) races along at perfectly orchestrated speeds for the brand to roll out several variations of Launch. 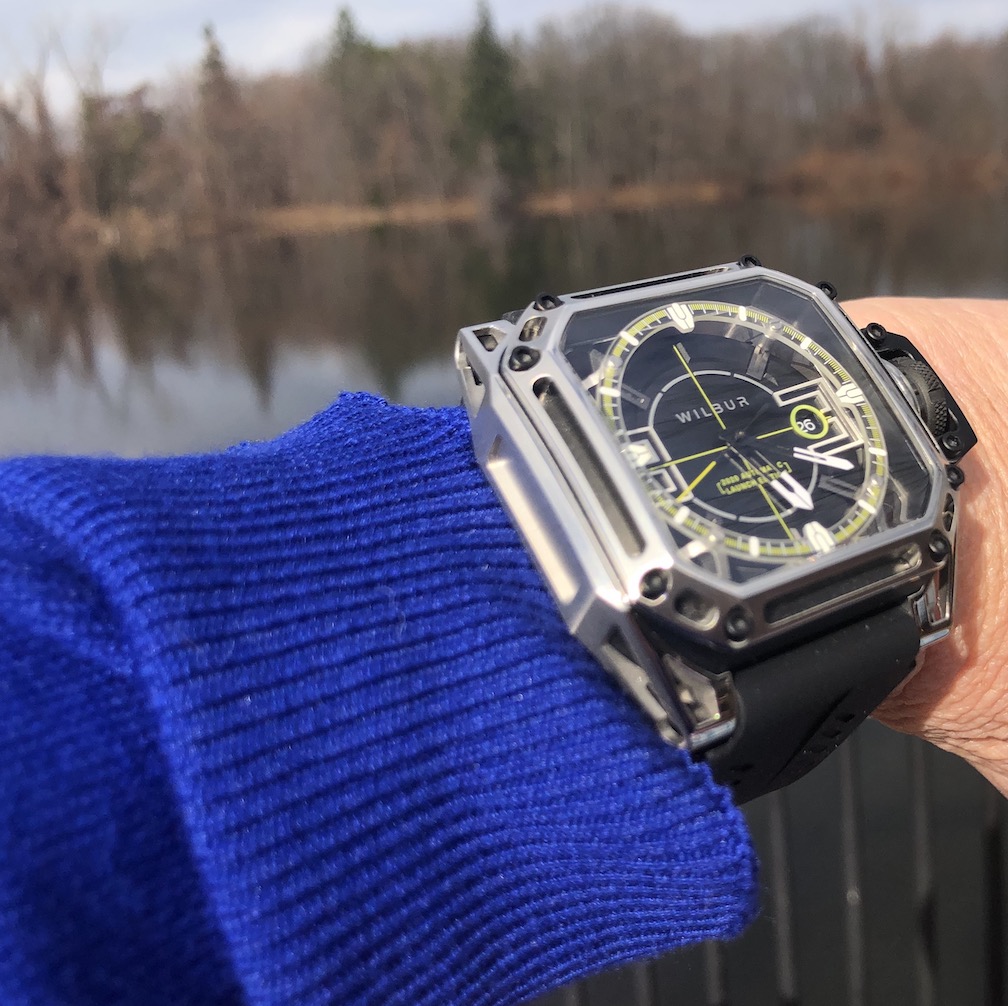 Wilbur Launch Edition watch sits beautifully on the wrist and makes an artful statement of individuality.

The Wilbur Launch Edition deftly blends his passion and creativity in design with space-age engineering for a complex timepiece that embraces the automotive world. The multi-piece watch case comes together like a chassis on an engine, and the futuristic look of the modular chassis system allows for further customization for bespoke pieces and additional editions. The case is made using polished and brushed surfaces on the nine different modular pieces that comprise it. The end result is an extremely technical appeal. 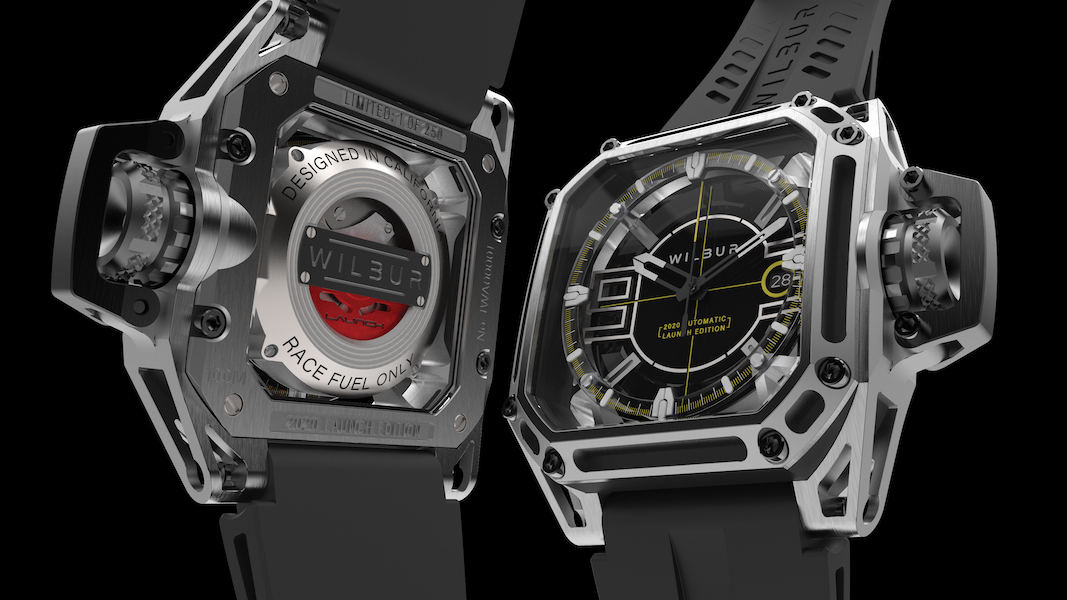 Each watch houses a customized automatic movement and the open-worked case allows for views all the way around. The movement inside is a reliable work horse: the Seiko NH35 automatic caliber. It is the same movement that was inside Jason Wilbur’s mechanical watch he had as a kid. The movement components, like the dial, seem to be suspended within, offering great depth and dimension. Wilbur has even filed a patent for the “suspended” dial and movement structure.

The case back bears the words “Race Fuel Only” as a nod to all those auto racing and car lovers who want something truly different on their wrists. It also says “Designed in California.” Wilbur wasn’t inspired by cars when he built the work of art that is the Launch Edition, he was inspired by the ideas in his head, by race cars and rocket ships. As such,  Wilbur has designed a look that breaks from tradition. 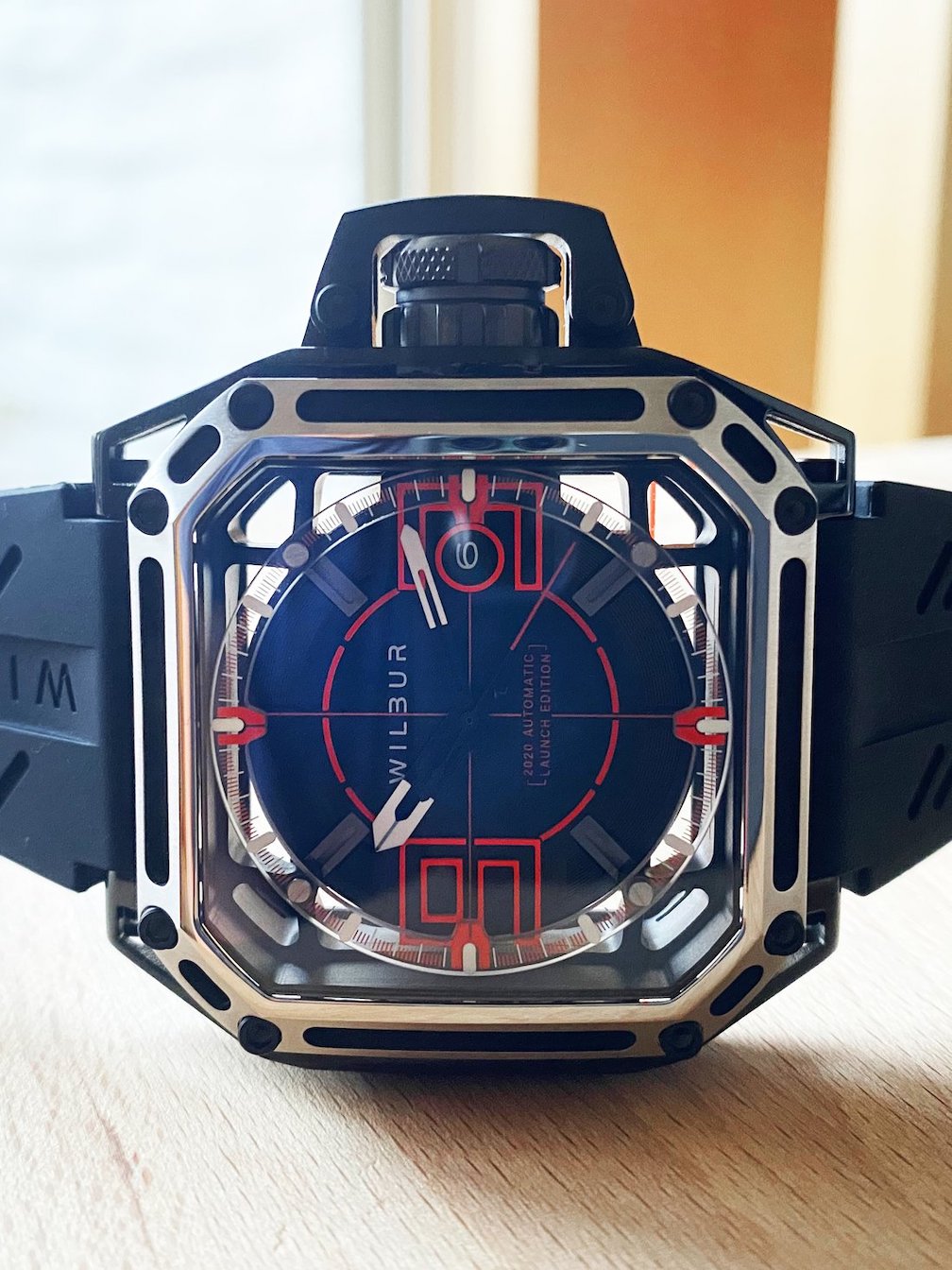 Just 250 pieces of each of the Wilbur Launch edition will be made and each will carry its number on the case back, as well. Small batches translate to exclusivity. Jason Wilbur is also able to create one-offs and special pieces thanks to the modular case construction. For instance, there is a unique Launch in carbon fiber and red accents  for $19,700 and other powerful pieces. Watches are offered for sale at the brand’s website: Wilburco.com. 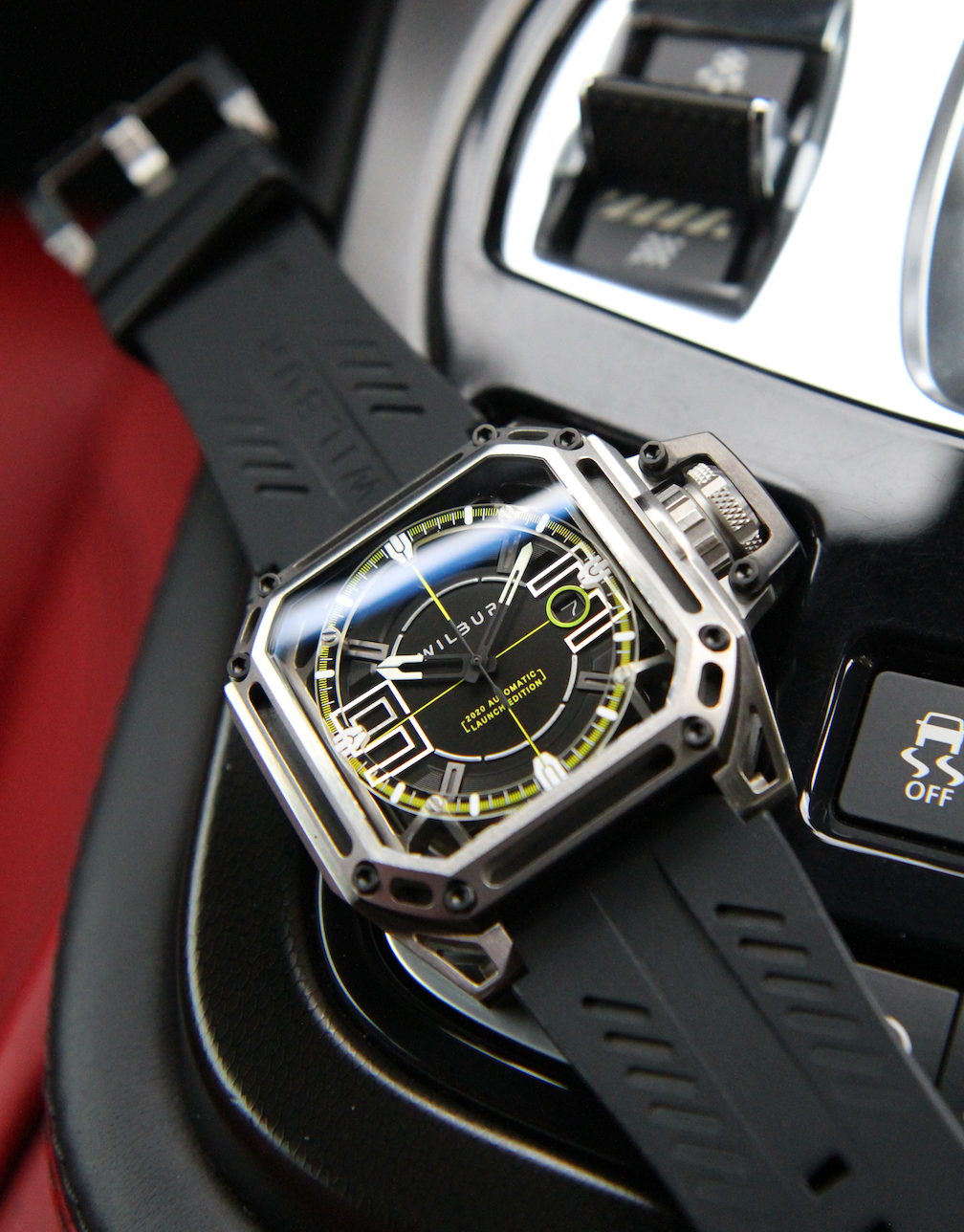 My Impressions of the Wilbur Launch Edition

I wore the stainless steel version with yellow accents for a couple of weeks and was glad I did. It is a big watch and I have a little wrist so when I first opened the box (designed by Jason), I was a bit concerned. However, once on my wrist, all anxiety ebbed. It wasn’t too big for me, it was just a beautifully bold statement, and I watched people as they stared for a bit at the watch before glancing away. If COVID-19 had not been a thing, I am sure they would have asked whose watch I was wearing. Having seen Jason Wilbur’s other watch designs and some of his sketches of other items, I could definitely see his design style ooze from the watch: different, technical, challenging but doable. I love the watch, although in reality if I were buying one, I would spring for the red accents over the yellow — just a touch more powerful.

Top 10: The Most Comprehensive Look ‘Year of the Rabbit’ Watches
January 4, 2021

Introducing The Vacheron Constantin Year Of The Rabbit Watch
January 4, 2021