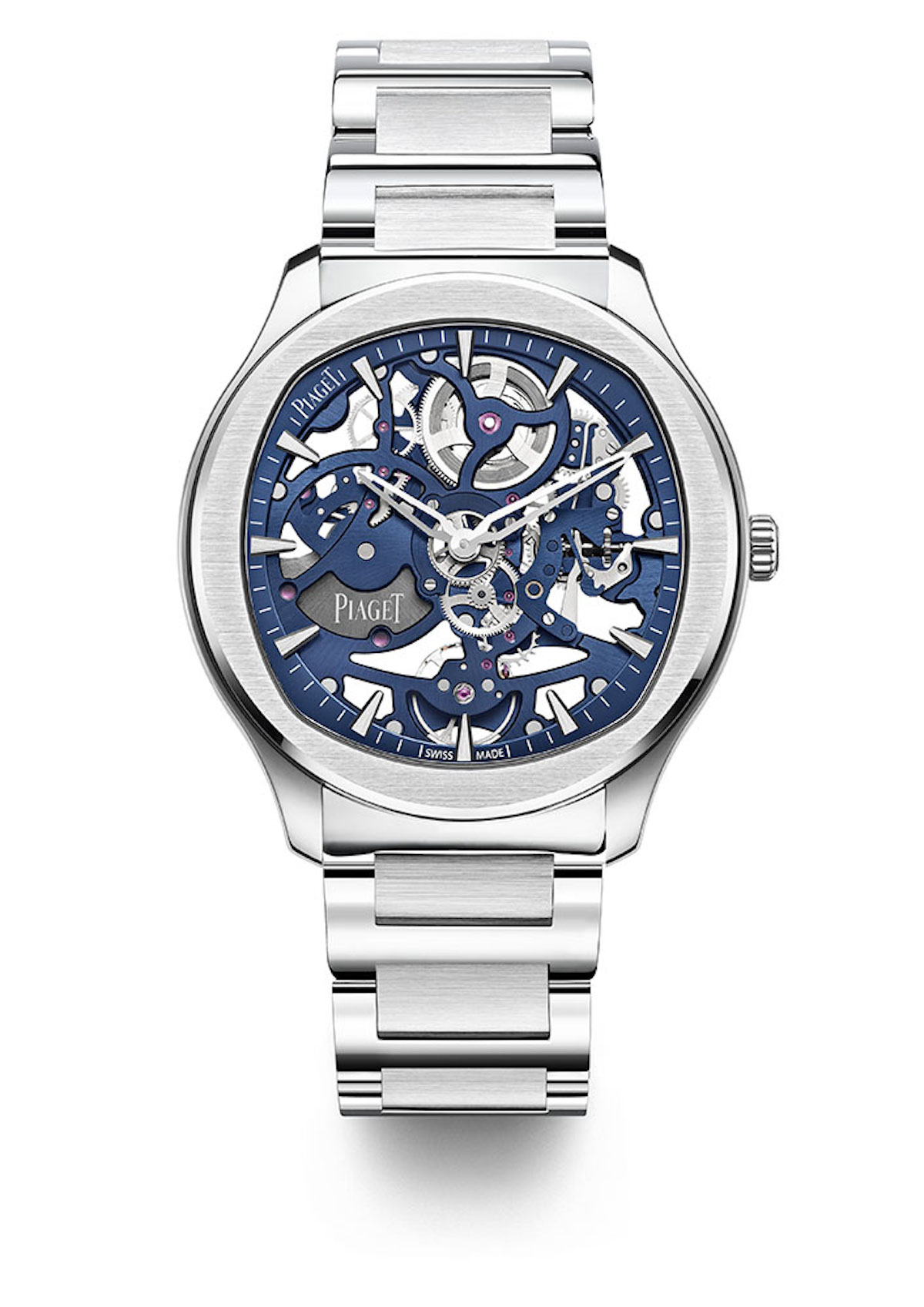 Easily one of the most iconic watches of the 20th century, the Piaget Polo continues to evolve. Now, the legendary sport watch is introduced in a skeletonized version. The Piaget Polo Skeleton watch showcases the brand’s incredible watchmaking talents by reducing the metal movement to its bare essentials and laying it open for everyone to view. 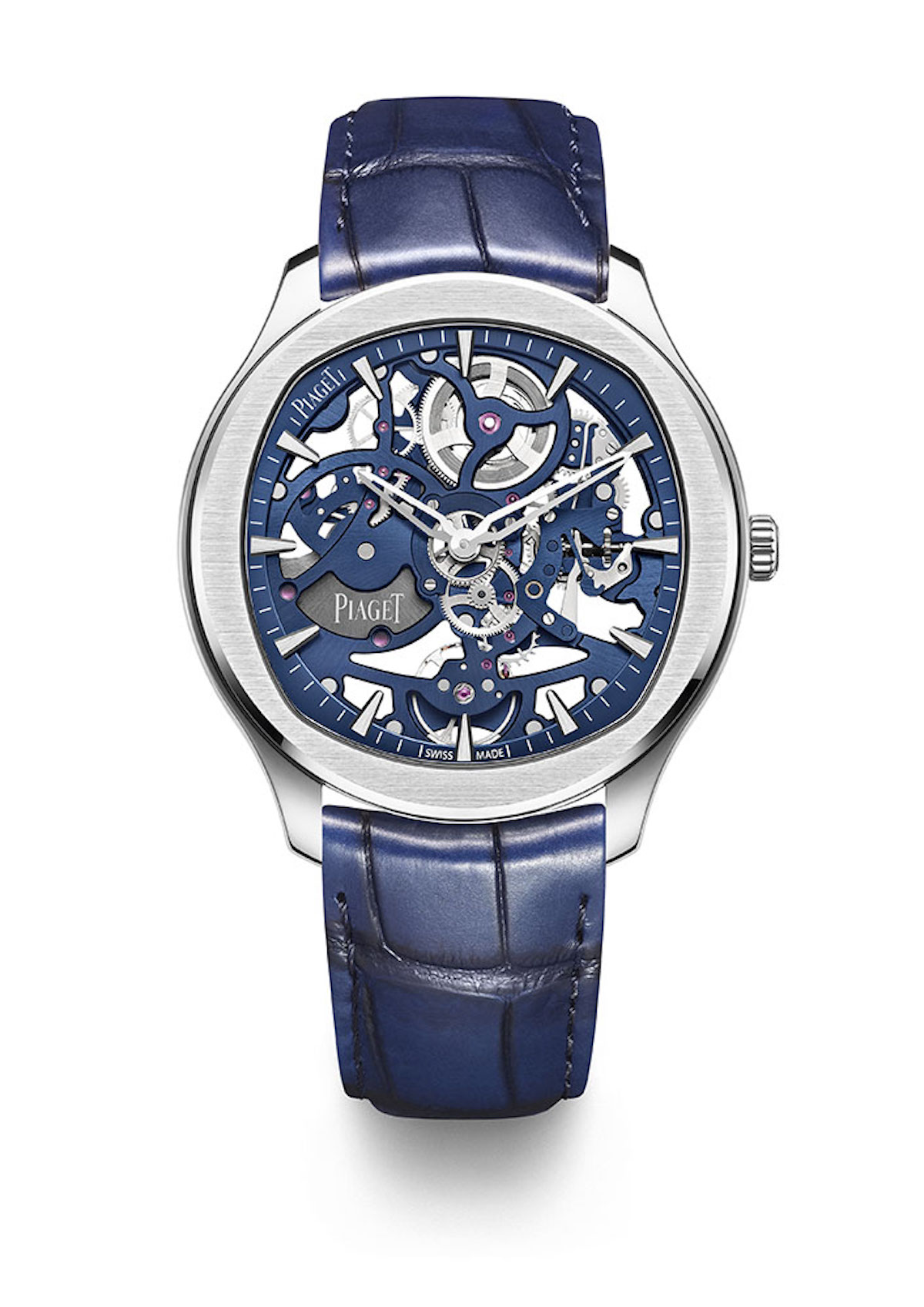 In most cases, a skeleton watch has nearly 75 percent of the movement chiseled away – a difficult job because if too much of the metal is carved away, the part will not be as strong as it needs to be. It is a balancing act carried out by only the finest specialists.  Luckily, Piaget is just such a specialist. It has been creating skeletonized watches since the 1970’s.  Additionally, Piaget is a master at creating ultra-thin watches and has achieved many world records for this category. The new Piaget Polo Skeleton brings both of these horological feats under one roof. 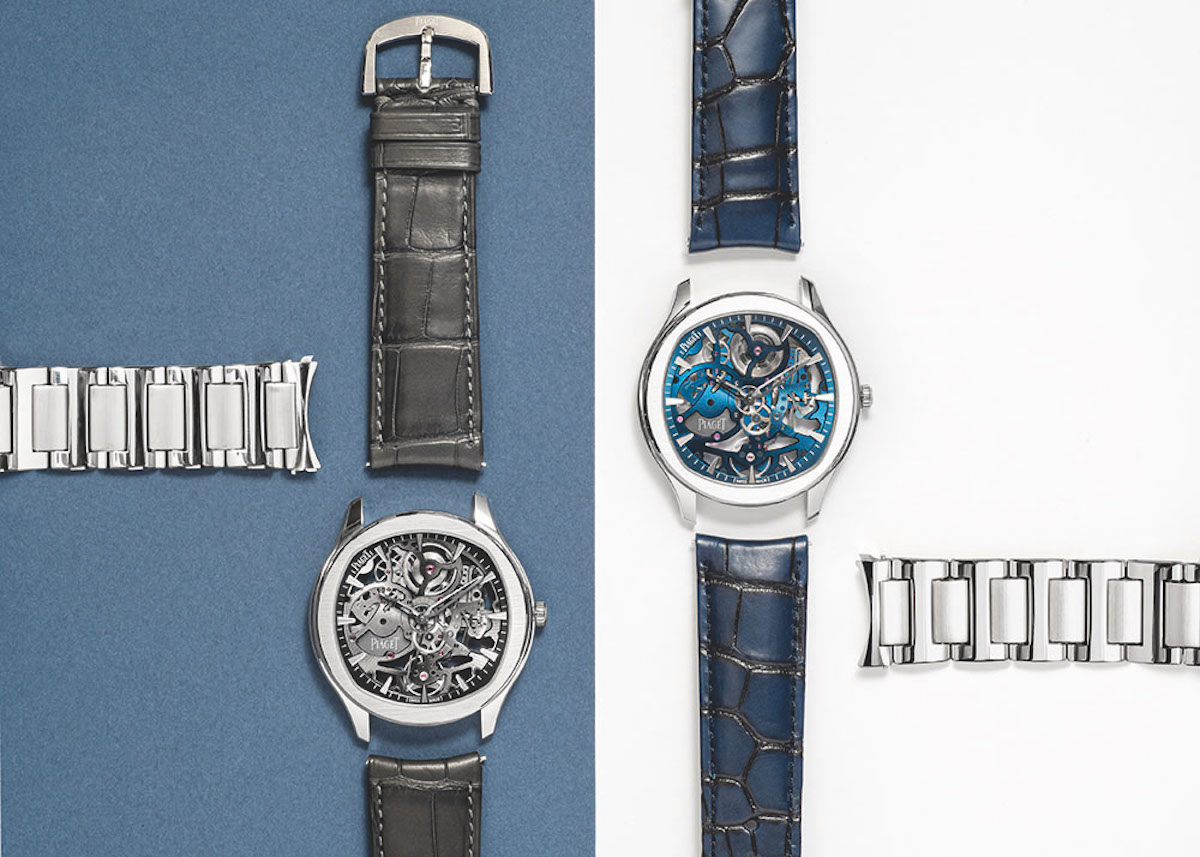 The two versions of the new Piaget_Polo Skeleton feature interchangeable bracelets and straps.

The new Piaget Polo Skeletonized watch celebrates the first Piaget Polo sports watch built in 1979. As such, the watch retains many of its important characteristics, including the round bezel and cushion-shaped dial opening, as well as a slim profile. The case of the new watch, though, is 30 percent thinner than other existing versions – no easy accomplishment. More importantly, the new caliber is an evolution of the Piaget 1200S self-winding movement and is powered by an off-center micro-rotor engraved with the Piaget coat of arms. The movement measures a scant 2.4mm in thickness and it is housed in a case that measures just 6.5mm thick. 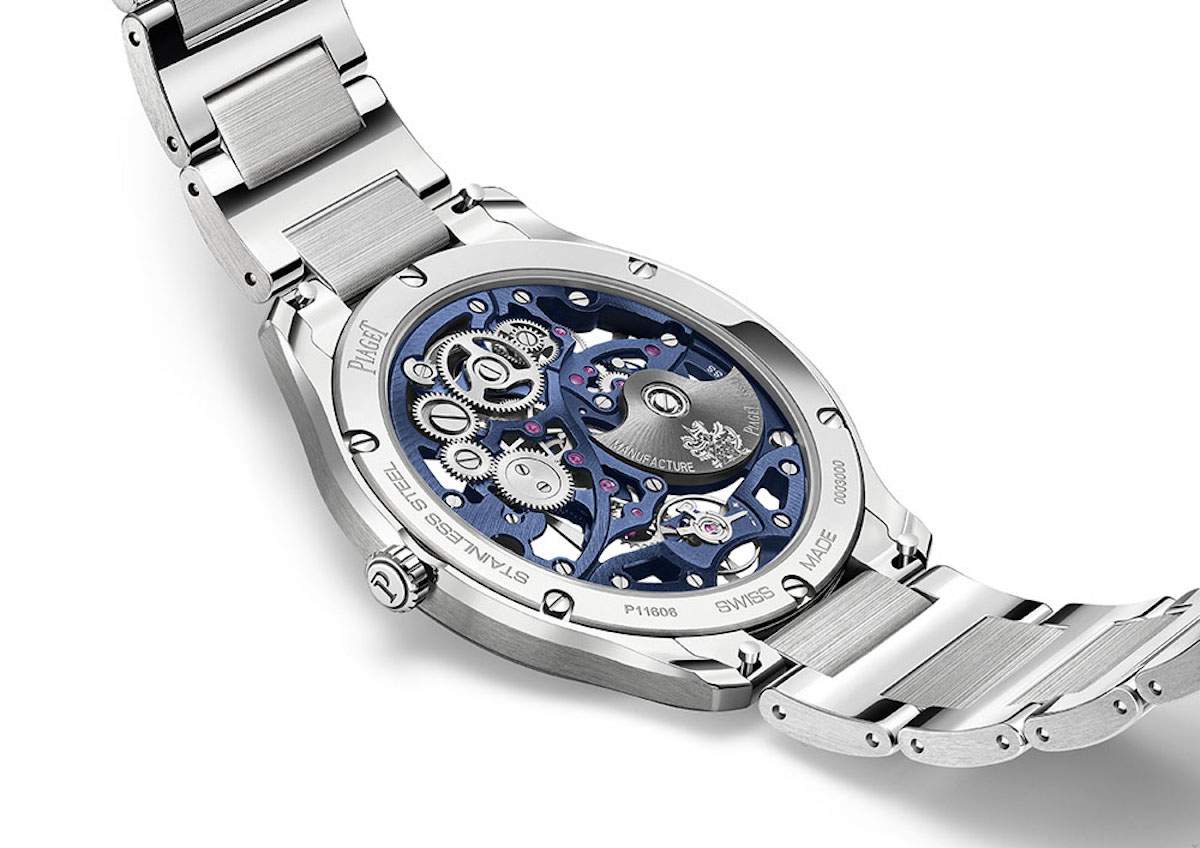 A sapphire case back allows for viewing of the movment of the Piaget_Polo Skeleton.

The wafer-like look of the intricate watch offers a grand dichotomy that you can’t really take your eyes off of. The movement is equipped with 44 hours of power reserve and the watch is water resistant to 3 ATM. It is finished with a stainless steel bracelet that is interchangeable to allow for an effortless change of look. Three are two versions being offered. One models features a Piaget Blue PVD movement – the first of its kind from the brand. The look is absolutely eye-catching. The other version is more subdued with a slate gray finished caliber. A transparent sapphire crystal case back allows for viewing of the finely finished caliber.

There have been many new iterations of the Piaget Polo over the years, including the innovative steel Upstream wherein the clasp was part of the case. This version, though, may be one of the beset renditions of Piaget horological prowess. The  Piaget Polo Skeletonized watch retails for $28,500. 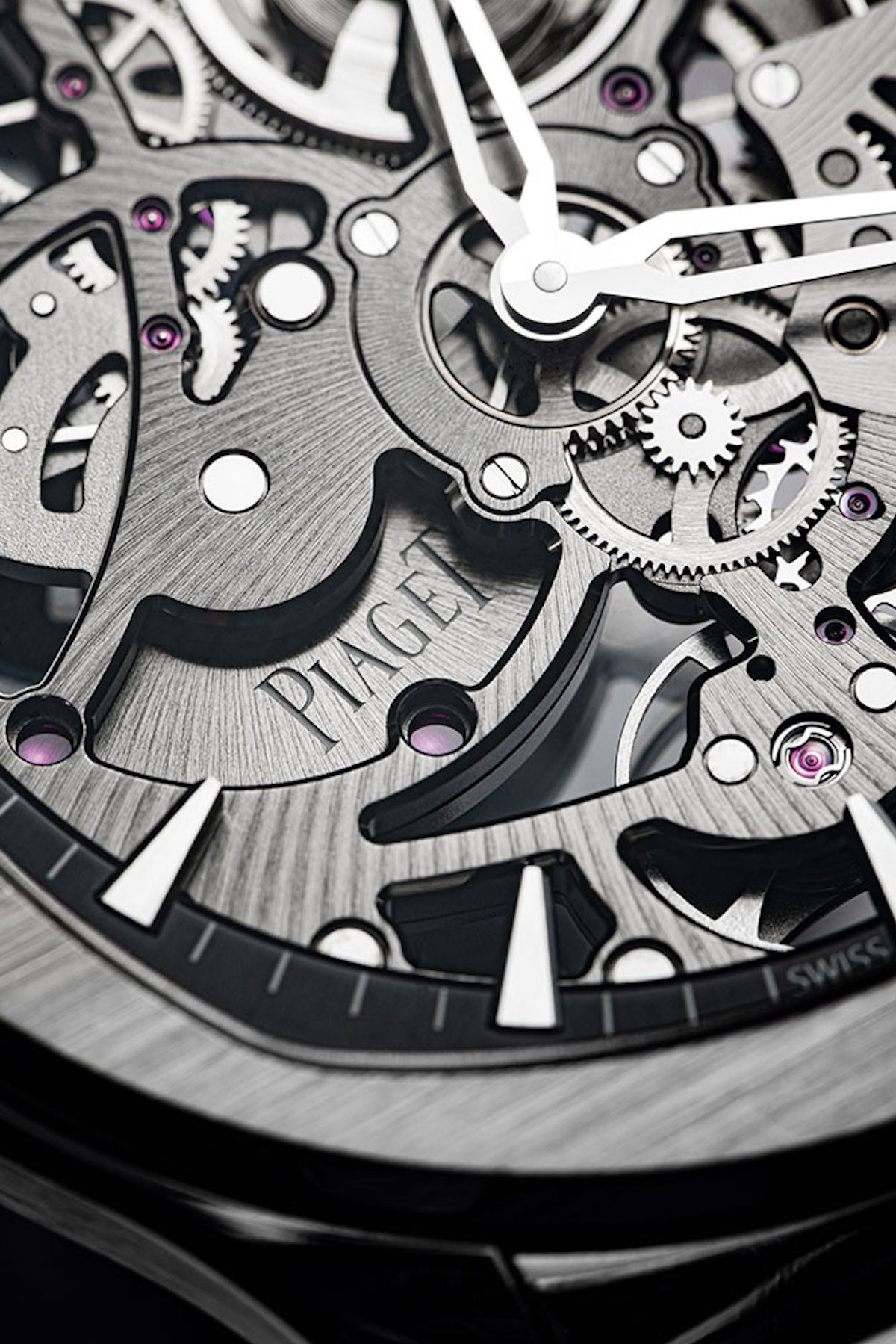 A close up look at the gray movement in the Piaget_Polo Skeleton .