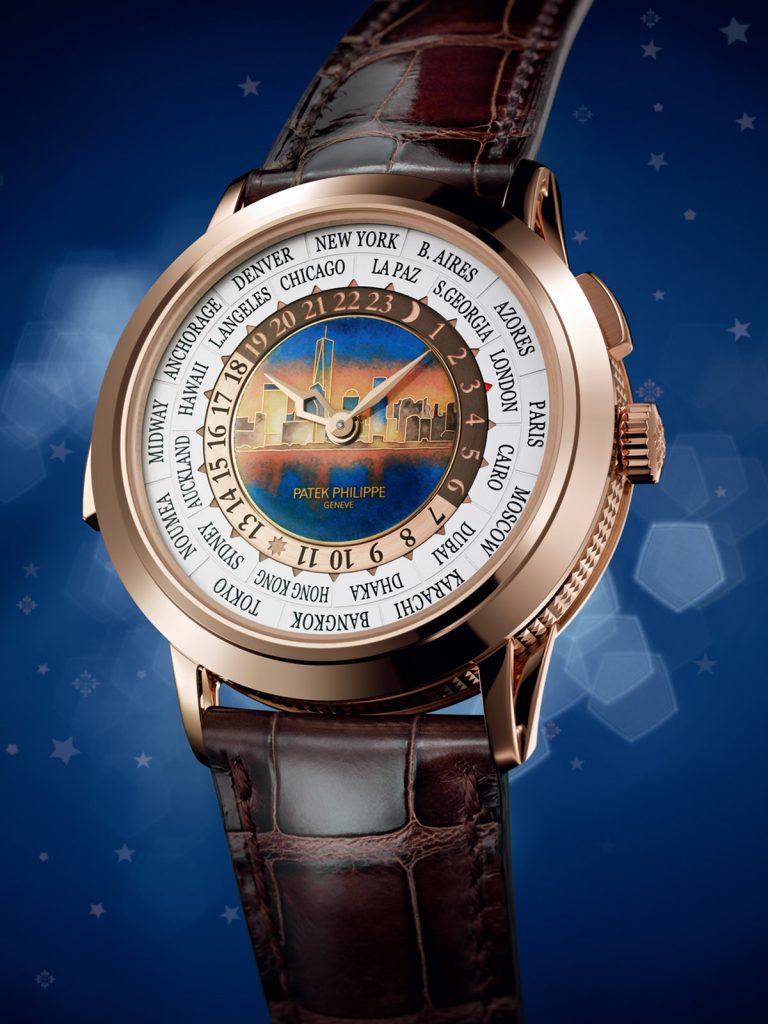 Today, Patek Philippe unveils a host of exciting new watches that celebrate the brand’s “The Art of Watches” Grand Exhibition in New York. The exhibition officially opens — free to the public — tomorrow and runs for 10 days, with one of the most expansive exhibitions of more than 450 current and historic Patek Philippe watches on display.  Additionally, the brand launches nine special watches made exclusively for the US market, and releases a world’s first timepiece: the $561,341 Ref. 5531R World Time Minute Repeater, New York Special Edition watch– the first such grand complication in the world to chime the time in the local time zone (with a choice of 24 zones). Here, we bring you a close up look at a few of the new watches, and at a few great historical pieces that you definitely won’t want to miss during the 10-day event from July 13-23.

There are many things that make the Patek Philippe Ref. 5531 World Time Minute Repeater, New York Special Edition watch so special. Among them: unique hand-painted cloisonné dials that pay tribute to New York with  day and night skylines; an all-new multiple patent-pending movement; the world’s first repeater watch to be able to chime the time in any one of 24 different local time zones.

The watch — created in two dial versions with just five pieces of each being made — is one of the more complicated watches on the market.  chimes the time for any location in the world. Being offered in two versions, each in a series of just five pieces, the all-new grand complication watch retails for $561,341. The  watch marks the first time both of these complications come together under one Patek Philippe case and marks the first time in the watch world that the repeater can chime the time in a local time zone instead of just in the home zone.  Via the city disk, the wearer selects the local zone; the watch chimes the local time on demand. 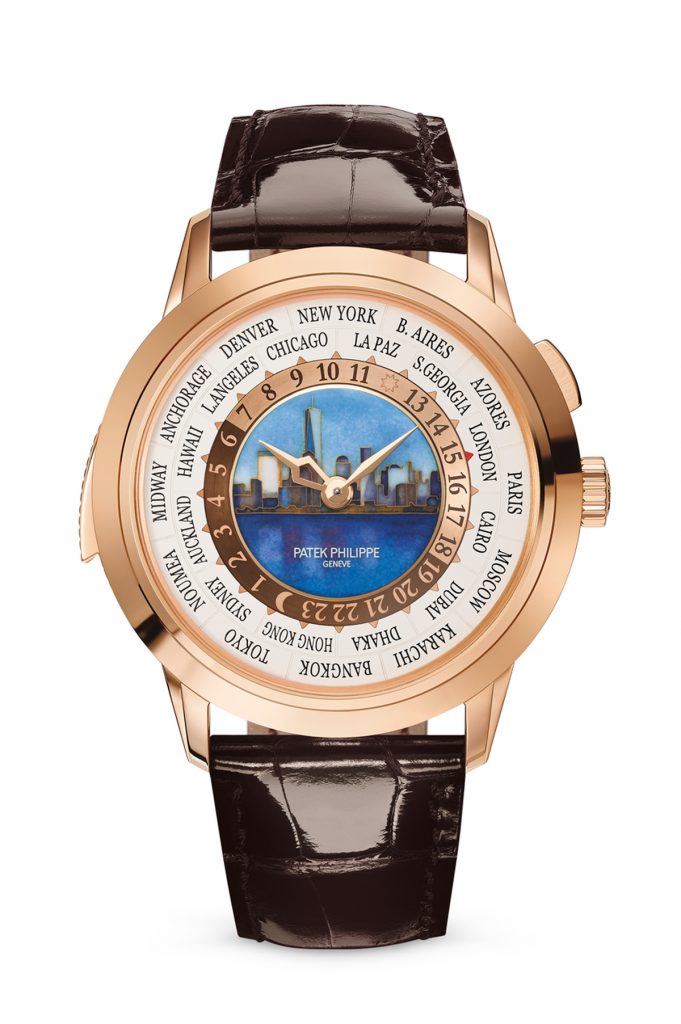 The watch movement, the R27 HU ultra-thin self-winding caliber with 462 parts, including high-tech Gyromax(R) balance and balance spring made of Silnivar(R),  has several patents pending. The  challenge for Patek Philippe’s watchmakers was finding the right way to combine two of the brand’s most coveted complications and have them work together in a new and different way.

Essentially, the brand used its World Time system, first developed in1999, as the basis for the new Ref. 5531.  It was nearly 20 years ago, in 1999, that Patek Philippe  improved the functionality of its World Time watches by combining the World Time mechanism with the Travel Time mechanism so that all three time zone indications could be corrected via a single pusher. One actuation adjusts the city disk, the 24-hour disk and the hour hand in steps of one hour without influencing the rate accuracy of the movement. It was this concept that the brand’s top watchmakers turned to for the new watch.

The next challenge was how to  join this mechanism with a minute repeater that would work in tandem with the city and 24-hour disks in order to chime local time in 24 zones — something never achieved in horology before because the two complications operate independently from one another. The acoustic chiming mechanism had to be mechanically coupled with the World Time’s  rotatable city and 24-hour disks– no easy feat.

The Patek Philippe R27 HU ultra-thin self-winding movement that powers the Ref. 5531 consists of 462 parts and has patents pending.

According to Patek Philippe, the fundamental changes include the fact that in the new movement, the hour snail of the repeater mechanism is no longer interconnected on the cannon pinion where the minute and quarter-hour snails remain, but instead the hour snail is continuously moved by the time-zone wheel of the World Time mechanism. In most regular repeater watches, the hour snail is driven or controlled by the quarter snail. This patented system makes it possible to  advance the hour snail with one-second accuracy. When the minute repeater is activated on the new movement,  the mechanisms that execute the hour, quarter, and minute strikes briefly interact to sound the melody of time, while the World Time mechanism is blocked so that no time zone adjustments can take place while the time is being sounded. Patek Philippe has another patent pending for the modifications it made on the gongs, wherein the two gongs are attached to the case band instead of to the movement plate. This helps the brand achieve an even stronger, louder more melodious acoustic sound.

The  Ref. 5531 World Time Minute Repeater is offered in an 18-karat rose gold case that measures 11mm in height for a slim look. The case back is fitted with a transparent sapphire crystal for viewing the movement, which is meticulously finished to Patek Philippe Seal standards. There  is also an interchangeable solid-gold case back sold with the watch.   Both s are engraved: “Patek Philippe New York 2017.” 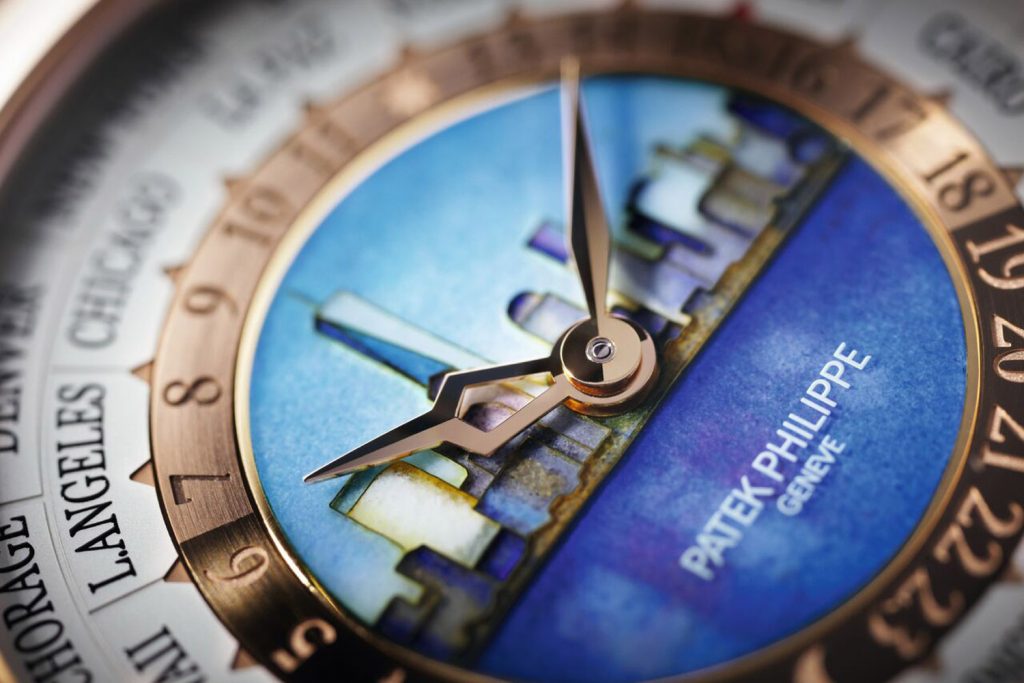 The Patek Philippe Ref. 5531 New York by Day watch is made in a limited edition of 5 pieces; New York by Night is the same number of pieces.

In addition to the Ref. 5531R World Time Minute Repeater watch, Patek Philippe unveils several other New York 2017 Special Edition watches. Each of these watches features a case back engraved with “PATEK PHILIPPE NEW YORK 2017” inscription. We will bring you more details on these in the coming days, but for now, here are some highlights. 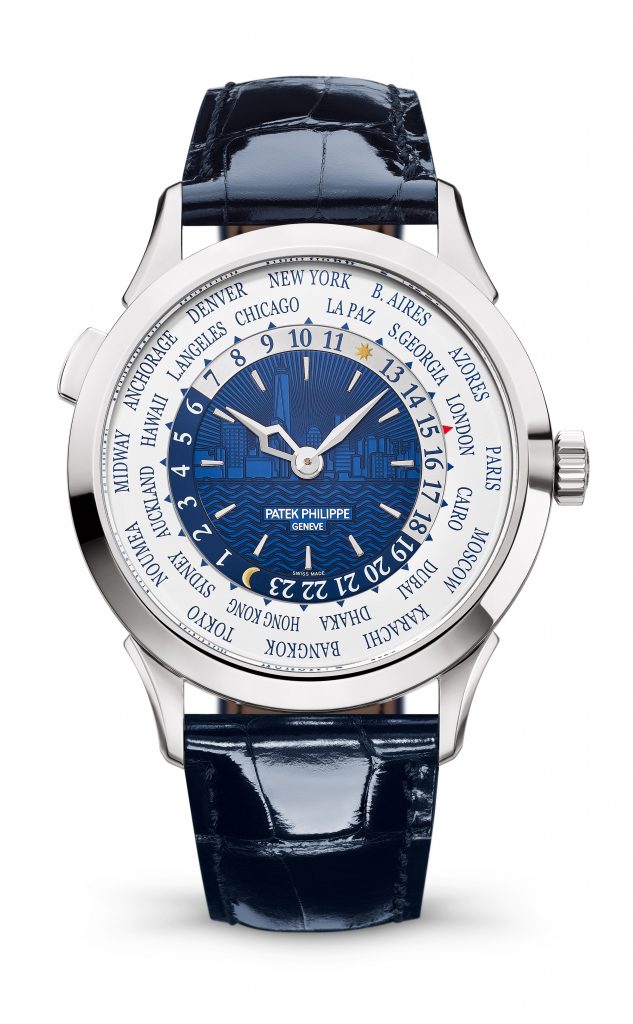 World Time is all important to Patek Philippe and today’s busy executives, so the Ref. 5230 New York 2017 Special Edition men’s wristwatch is created in a series of 300 pieces. Each 18-karat white gold watch houses the self- winding caliber 240 HU movement. The city disk and the 24-hour disk (with day/night segments) display the time in all 24 time zones, each of which can be adjusted by one-hour increments via the pusher at 10:00. The dial is finished with an opaline blue center embossed with the same Manhattan skyline scene that is hand painted in the center of the Ref. 5531. The hour hand is delicately skeletonized and shows the silhouette of the “Southern Cross” constellation, a hallmark reserved exclusively for World Time watches.  It retails for $47,000. 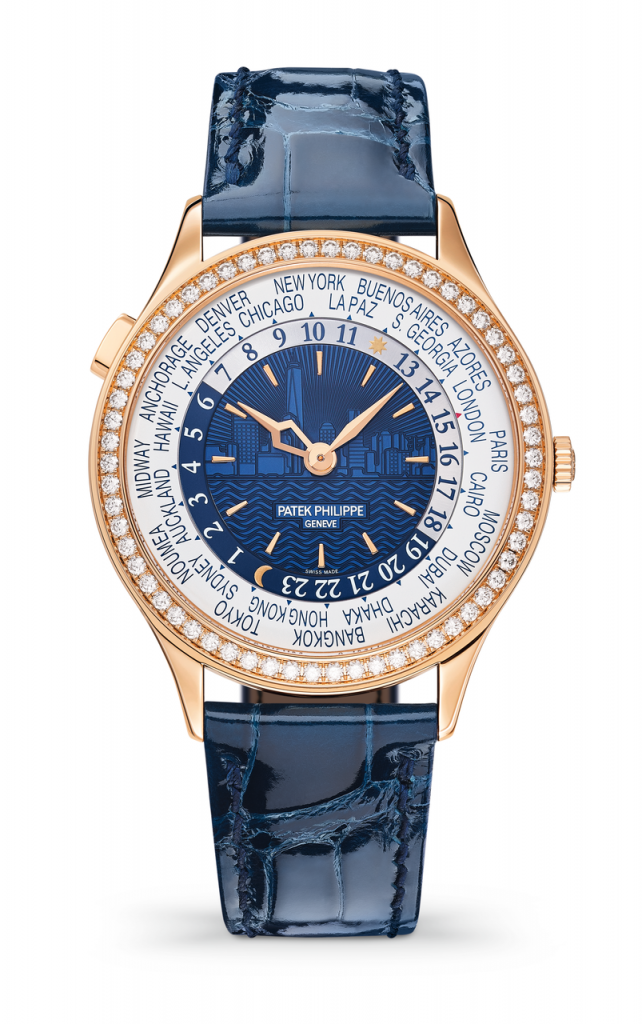 Patek Philippe  Ref. 7130 World Time watch New York 2017 Special Edition houses the same movement as the Ref. 5230 and offers the same functions. It is created in white gold and in rose gold — just 75 pieces of each — adorned with a bezel of 62  flawless white Top Wesselton diamonds (~0.82 ct). It is sold on a dark blue alligator strap to complement the embossed dial. It retails for $56,702.

It wouldn’t be right if the brand did not also indulge in the minute repeater for New York women, so Patek Philippe unveils the Ladies First Minute Repeater — of which just three will be made. The Ref. 7000/250 New York 2017 Special Edition features a blue enamel dial with diamond hour markers. The 18-karat white  gold case is further bedecked with 160 flawless Top Wesselton diamonds in the brand’s proprietary “Flamme®” setting. The ultra-thin self-winding caliber R 27 PS movement sounds the hours, quarter hours, and minutes on two gongs on demand. 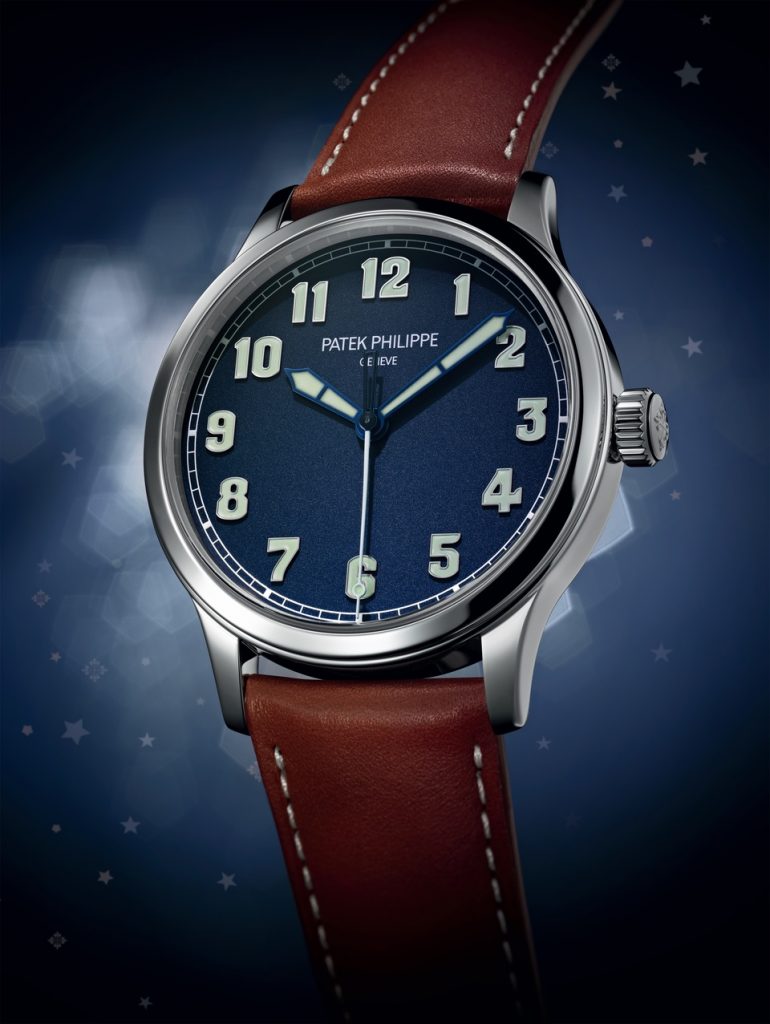 A particular favorite of ours is the Ref. 5522 Calatrava PilotNew York 2017 Special Edition  watch. It is one of the few pieces made by Patek Philippe in stainless steel. Created in an edition of  600 pieces with an exclusive dial that recalls vintage Patek Philippe aviator’s watches. The dial here is created in blue to honor American fighter planes of the 1930s.  The brown calfskin strap with contrast stitching was inspired by the harnesses paired with classic flight suits. The stainless steel clevis prong buckle resembles the belt buckles that pilots used to secure their survival kits. The  watch is powered by the self-winding caliber 324 S. Best of all is the price:  $21,547. 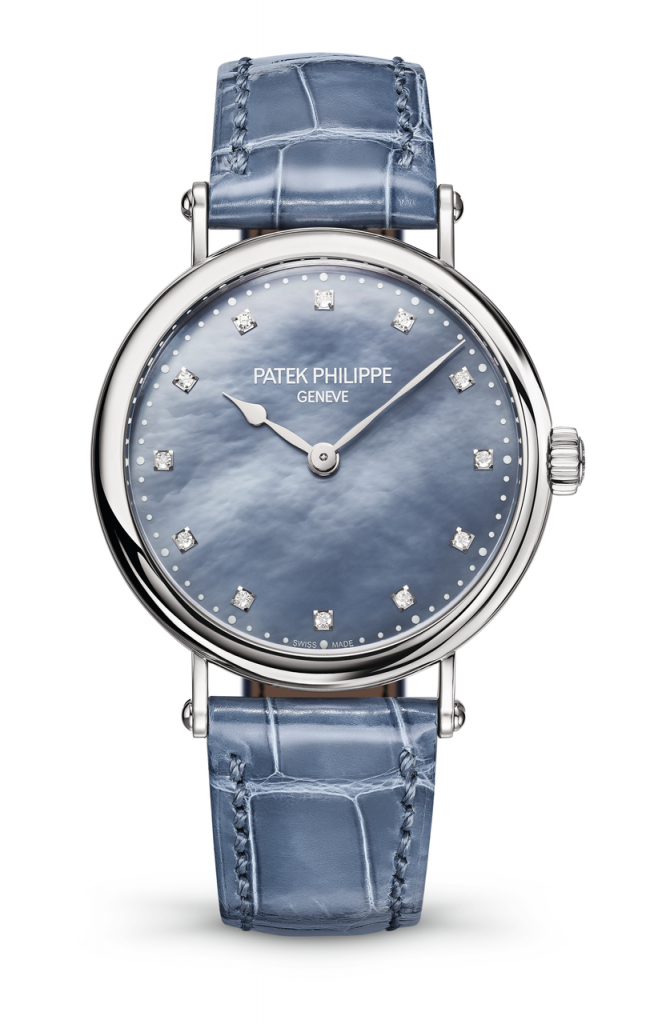 To create the space needed for  such a grand scale exhibition that consists of 10 rooms, historic and current watches, live demonstrations and a theater room, and cafe, Patek Philippe has taken over the entire space of the famed Cipriano 42nd Street and has transformed it into a magical wonderland of watchmaking and Geneva sophistication.  The brand even built an entire second floor inside Cipriani. Among the most exciting rooms is the historic room — chocked with watches owned by famous people. 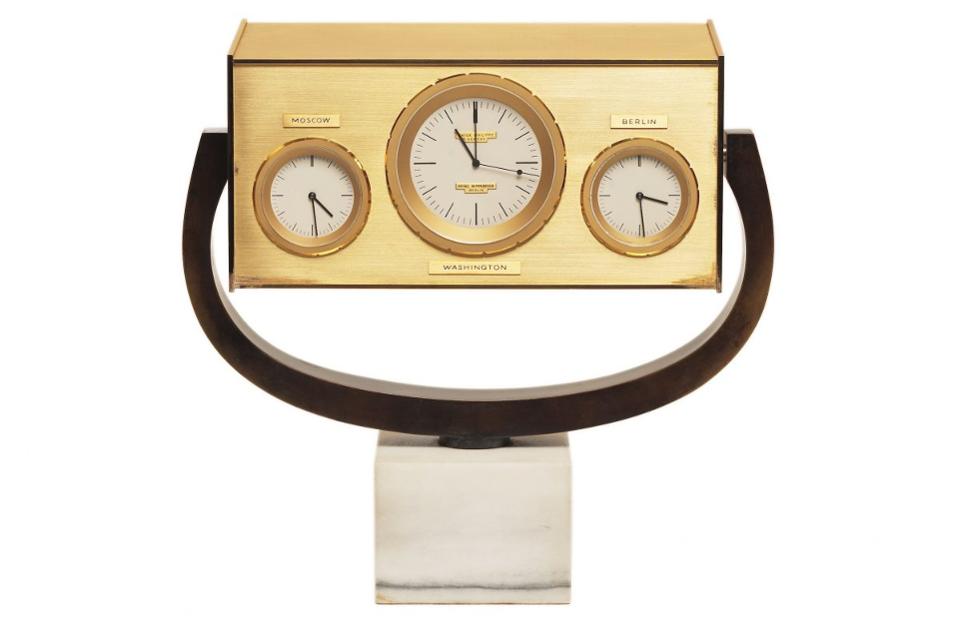 Among the 10 rooms, some are definitive highlights. For instance the Historic Room showcases watches and clocks owned by such legends as  President John F. Kennedy, baseballer Joe DiMaggio, and famed American entrepreneurs Henry Graves Jr. and James Ward Packard — whose quiet war with one another over having the best timepiece resulted in some of the world’s most complicated watches. In fact, the U.S. historic room houses   27 noteworthy timepieces  on loan from  the Patek Philippe Museum in Geneva, the John F. Kennedy Presidential Library and Museum, and private collections.

The John F. Kennedy Presidential Library and Museum in Boston, MA, lends a key clock to the exhibit:  a quartz-powered desk clock that belonged to John F. Kennedy. The clock  was made by Patek Philippe and was presented to John F. Kennedy by the Mayor of West Berlin  in June 1963 during Kennedy’s trip there. The clock is crafted in gilt brass, marble and wood and features a  rectangular brass casing  on a marble base, with a wood arm for nautical appeal. The case features three inset clock dials: a large center one displaying the time in Washington, D.C. and two smaller dials on either side of it that give the time in Moscow and the other in Berlin. 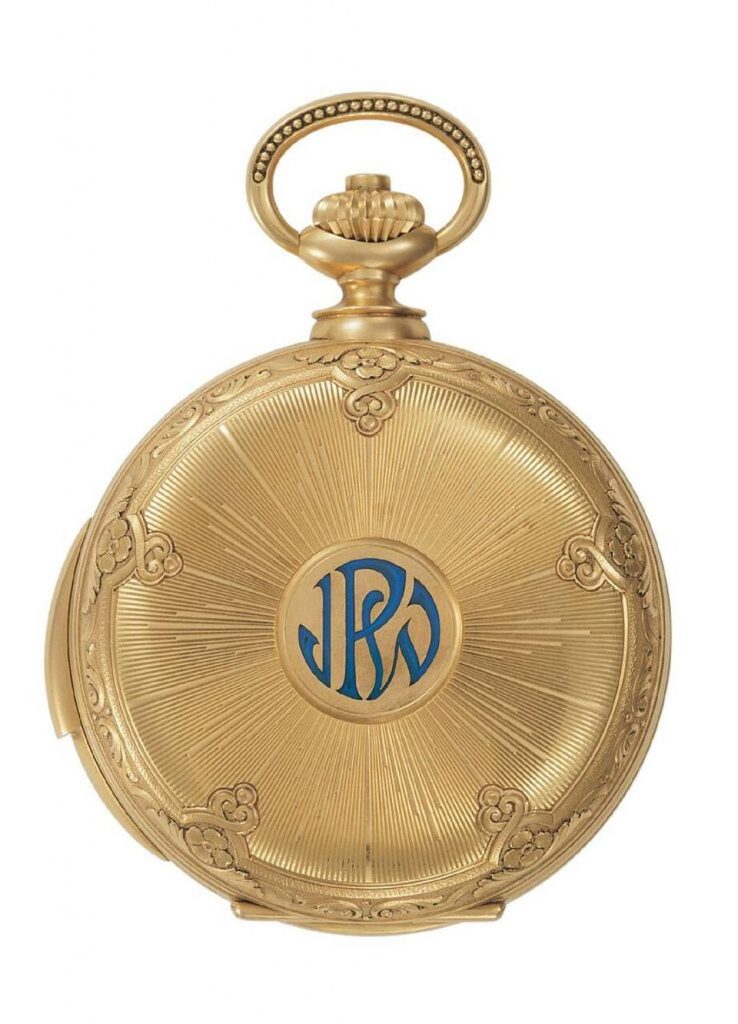 The 1927 James Ward Packard pocket watch is also on display at the Patek Philippe Art of Watches Grand Exhibition in New York.

The Patek Philippe Ref. 130J chronograph owned by American baseball icon Joe DiMaggio is also in this room. That watch was built in 1948 and was given to DiMaggio by the owners of the New York Yankees. Eleven watches made by  Patek Philippe for the famed collectors of the early 20th century James Ward Packard (of Packard automotive legend) and banker Henry Graves Jr.  are also on display. This includes the 1933  Henry Graves Supercomplication pocket watch that sold at auction by Sotheby’s three years ago for more than $23 million and that houses 24 complication. For those who love a bit of history, this room brings it home. However, there are many other rooms to discover, and so we will continue to showcase other highlights from the exhibit in the ensuing weeks.