Introducing A World’s First: The Urwerk UR-100 SpaceTime Watch 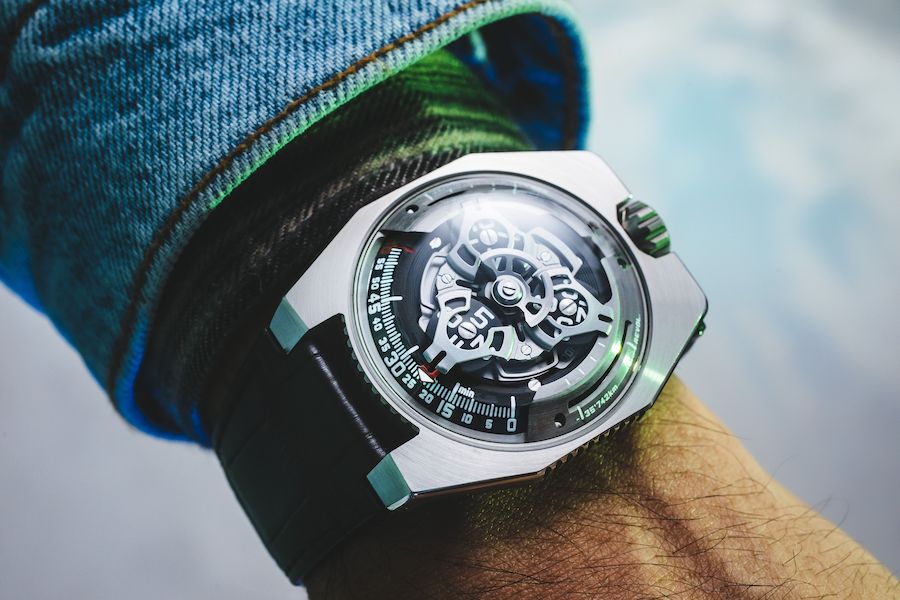 Urwerk UR-100 SpaceTime watch on the wrist.

Astronomers, scientists, and studiers of time – this is the watch for you. It is also the stuff watch collectors’ dreams are made of: a three-dimensional work of art, horology and science in an incredibly limited edition from one of the strongest small independent brands on the market. I mean, does it get any better? The answer is yes. Just wait until you read more about Urwerk’s new UR-100 SpaceTime watch.

Initial Impressions of the Urwerk UR-100 SpaceTime Concept

You will have to read my impressions of this watch at the end because if I tell you what I think now, I will be giving so much information away about this astronomical wonder before even explaining what it is or how it works. However, let me say this: Wow. From aesthetic design, to technical watchmaking mastery and scientific accomplishments, this watch has it all. 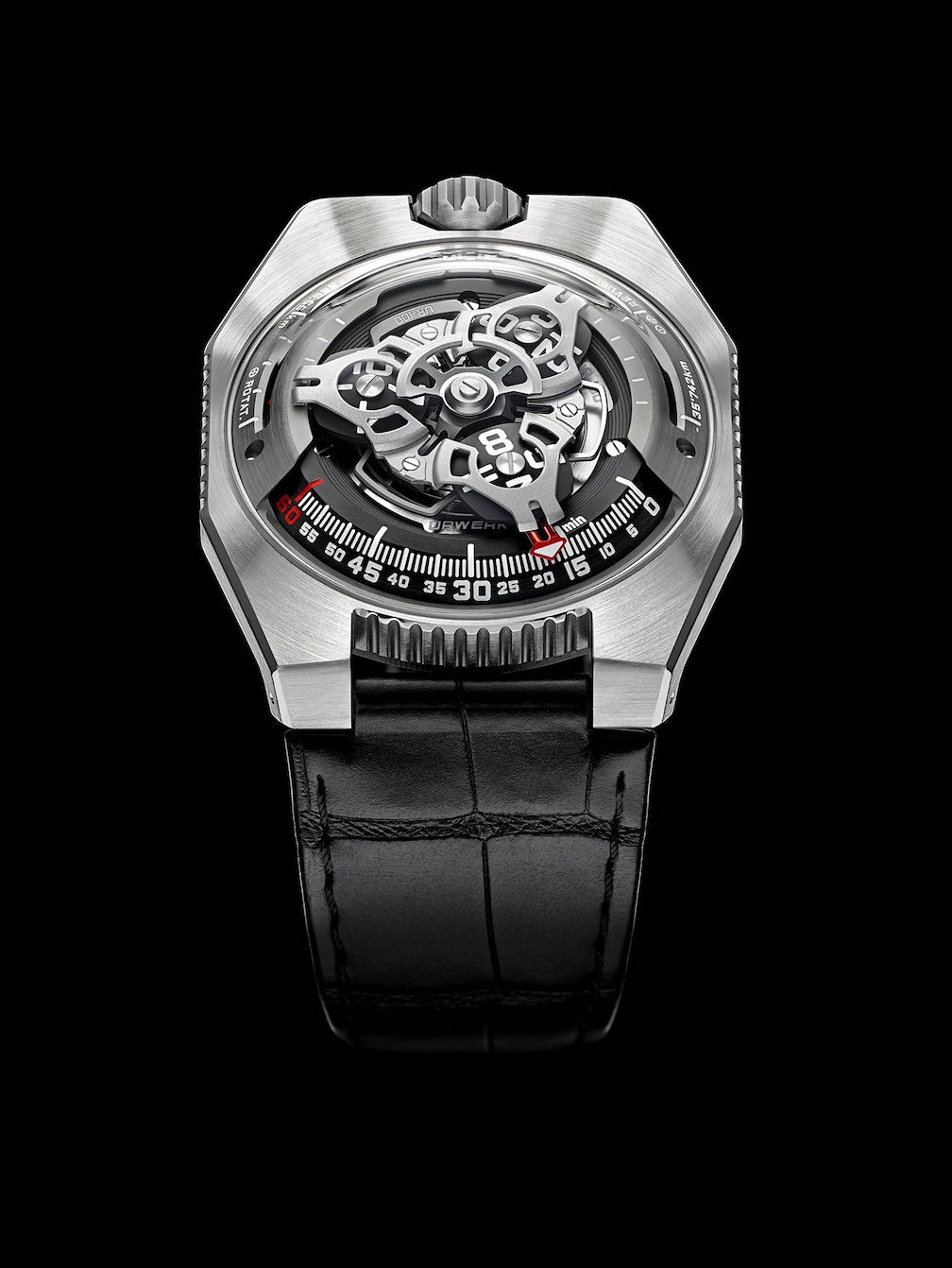 Urwerk UR-100 SpaceTime watch indicates time and equatorial time — showcasing the movement of the Earth while we personally are standing still.

I will also say that back in 1997 when co-founders Martin Frei and Felix Baumgartner unveiled their first watches under the brand name Urwerk (a combination of “Ur” – original, and “Werk” –achievement), I was already half way into my 30+-year career as a watch journalist. Even at that, I was stunned.

By developing a “wandering hours” time display using orbital satellite disks that rotate on themselves and around the dial (often with only certain portions of the disks showing through the innovative cases), Urwerk quickly built a name for itself as innovative and pioneering.

In short, Urwerk captured something that no other brand had before: a mastery of time as well as mechanics. Since then, Urwerk  (which builds only about 150 watches a year) has continued to wow me – and to woo watch collectors globally—with its pioneering ideas and unique renditions.   This newest UR-100 SpaceTime is no exception, so lets get to it. 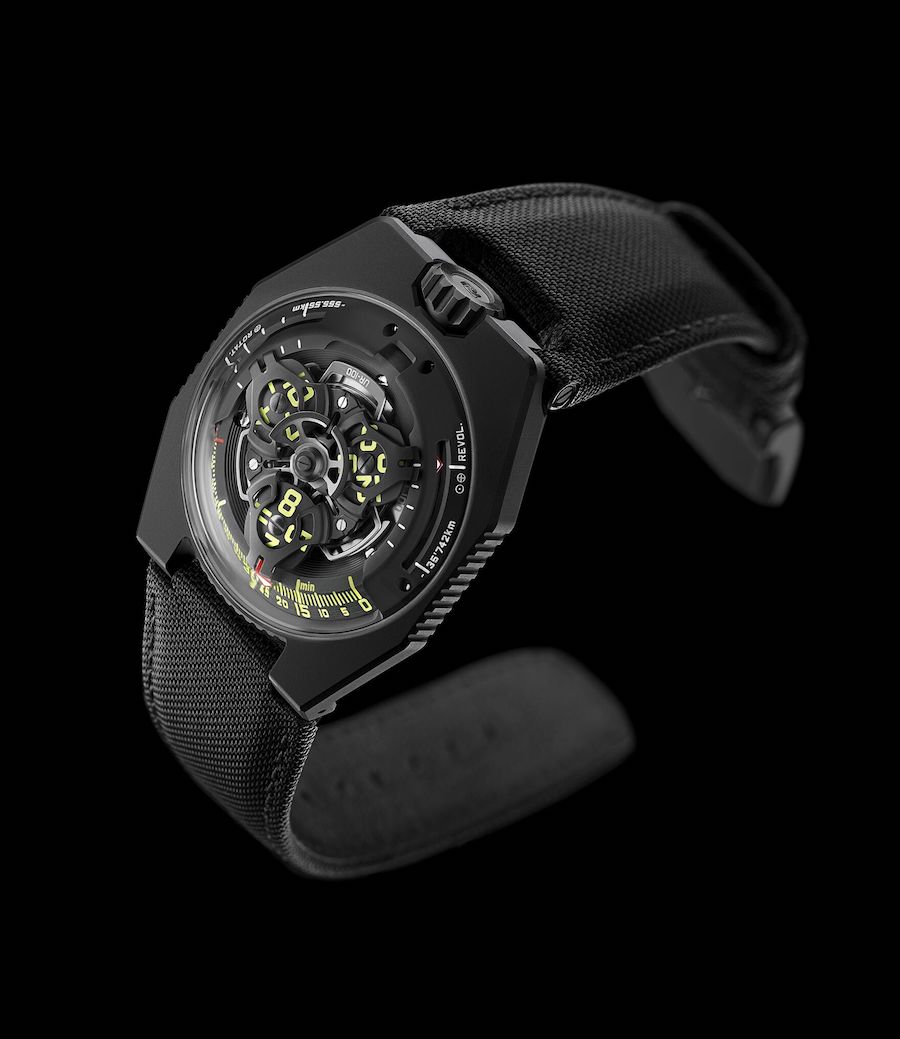 Urwerk UR-100 SpaceTime watch is offered in two versions: Iron and Black.

Before we get into the technical specifications of the incredible movement and functions of this watch, we need to delve a bit into the science and inspiration behind it.  The watch was inspired by a 19th-century pendulum clock (originally made by Gustave Sandoz for the 1893 World’s Fair in Chicago) that Felix Baumgartner’s father gifted him.  (By the way, that was the same World’s Fair where the young George W. Ferris unveiled his now-famous wheel ride, the Ferris Wheel.)

That clock with regulator dial, though, was not created to display the time in hours and minutes, but rather, equatorial time. It showcases the distance of the Earth’s rotation at the equator. Via a complex equation—and even more complex mechanics — the clock was built to track the movement of the Earth, which is always in motion. 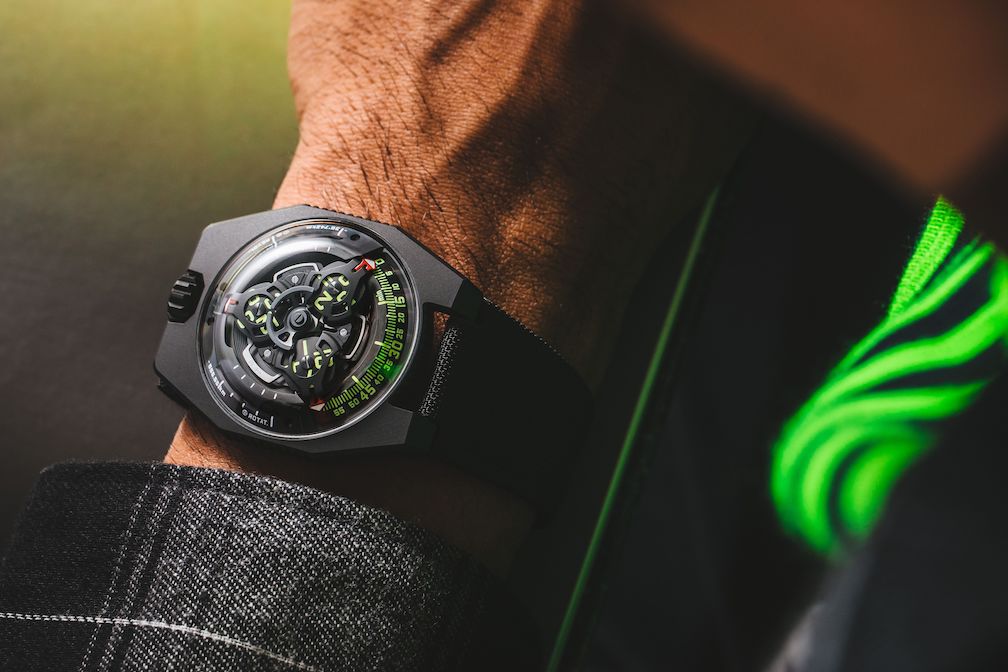 Urwerk UR-100 SpaceTime watch has a commanding presence on the wrist.

It was perfect for the time of scientists and exploration, and mesmerized many a fair goer.  Since the clock was in his possession, Baumgartner has been fascinated by it and the possibilities of miniaturizing it for the wrist.

“We live in a universe governed by three dimensions — time, rotation, and orbit — that we attempt to measure and master, but what escapes us is this notion of spacetime,” says Baumgartner, master watchmaker and   co-founder of Urwerk.

Urwerk UR-100 SpaceTime Features and Functions

For the first time ever in a wristwatch, Urwerk showcases Earth’s movement around the equator. In fact, even when we as individuals are standing still, we are part of a heavenly body that continues to move. Yes, we are always moving. 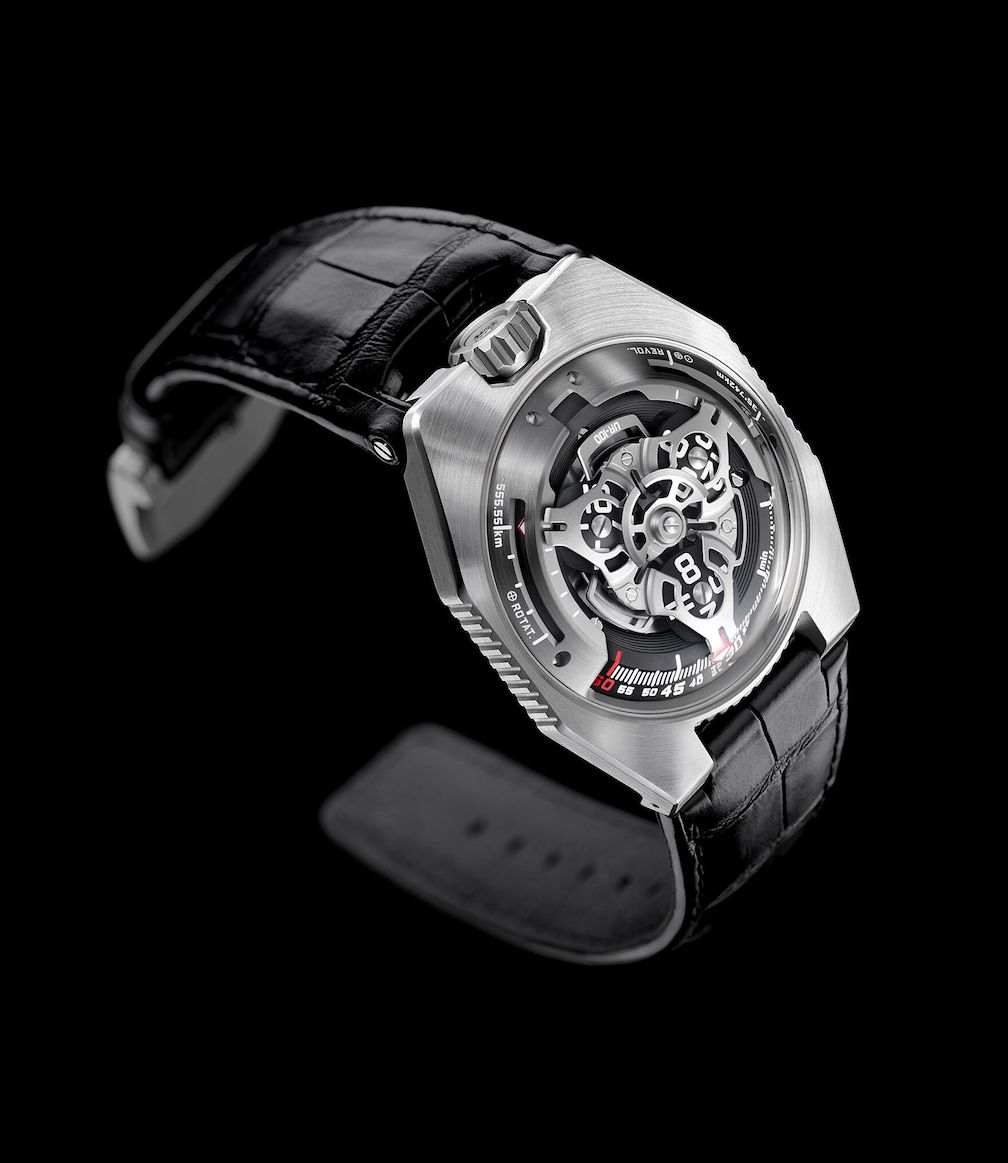 Urwerk UR-100 SpaceTime watch combines is created in a limited edition.

To capture that time and distance moved, Urwerk set about creating a complex caliber that brings together its wandering hours function, combining it with a tracking and measurement function that deftly serves up a journey though time and space.

Essentially, the watch is equipped with orbital satellite disks that display the time via hours and minutes, as well as the distance traveled through space. Hence the name: UR-100 SpaceTime.

In this watch, though, instead of the red-arrow pointing to the minutes jumping back to start the hour tracking again, it passes – unseen by the wearer — beneath the subsidiary dials and reappears to display the astronomical indications of distanced traveled on Earth and distance traveled by Earth. 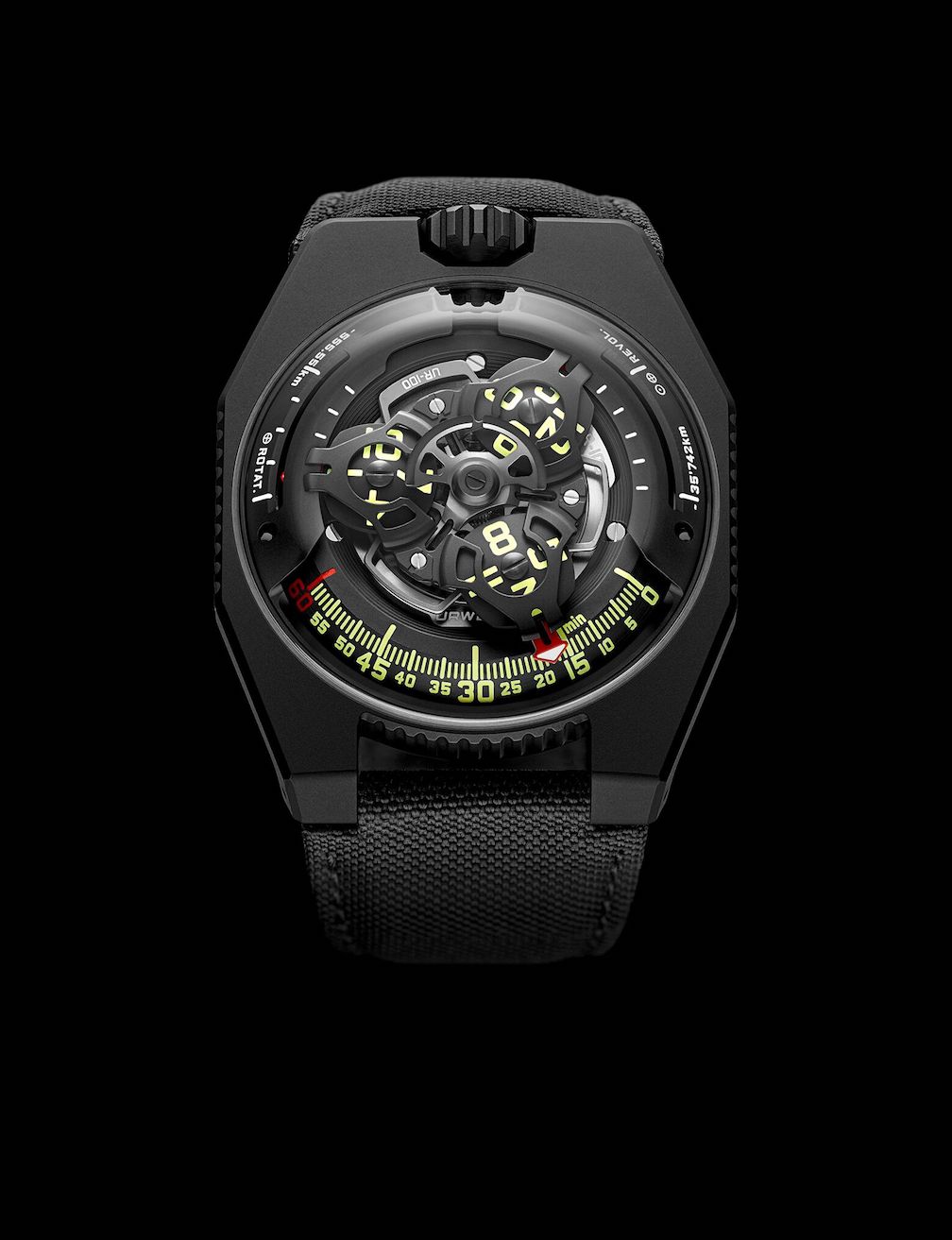 Ok, is your mind blown yet, or can you continue to find out how this works?

How The UR-100 SpaceTime Watch Calculates Earth’s Movement

On the outer potion of the Urwerk UR-100 SpaceTime bezel, beginning at 9:00 and running to about 3:00, there are distance indications. At 10:00, another red arrow hand indicates the distance in kilometers we have traveled on Earth (while doing whatever it is we are doing without noticing we are moving).  It calculates this based on the average speed of the Earths rotation on its axis at the equator, which is a distance of 555km  — 345 miles — every 20 minutes.

I should be losing a lot more weight than I thought with this distance traveled. But that is not all.  At the 2:00 position, a third hand points out the distance Earth has traveled in its orbit around the sun – that path equals 35,740 km – approximately 22,208 miles – every 20 minutes.  All three space and time calculations are displayed simultaneously.

“For me, watches have a philosophical dimension. They are a physical and abstract reproduction of our situation on Earth,” says Marin Frei, chief designer and co-founder of Urwerk. 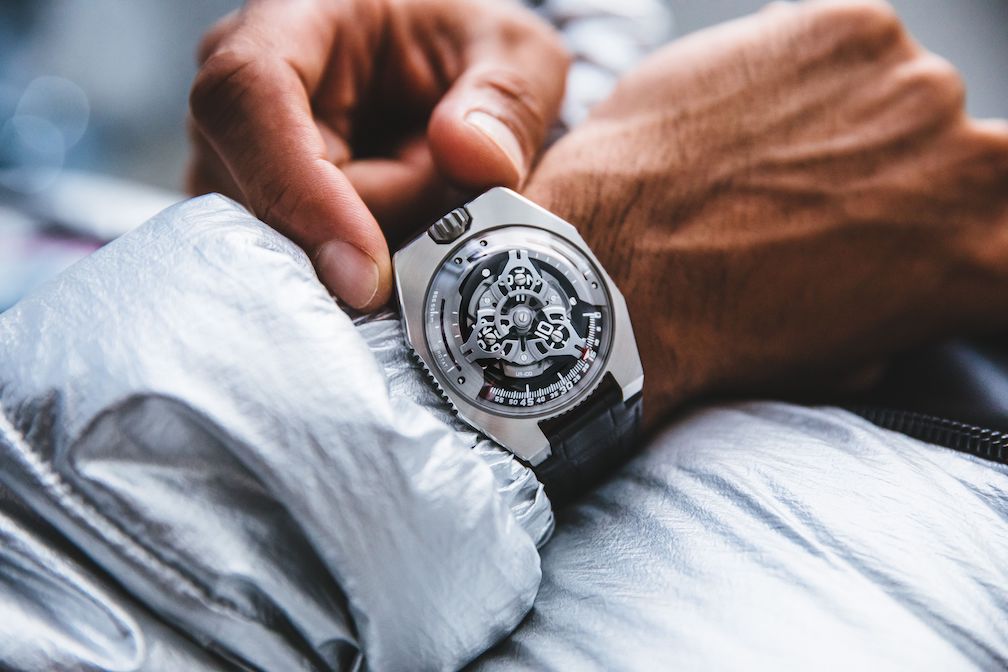 Ok, is your mind blown yet with the Urwerk UR-100 SpaceTime watch?

The movement that powers the UR-100 SpaceTime watch is the automatic caliber 12.01 that is regulated by a flat turbine referred to as the Windfang (air-trap) that is designed to minimize shocks to the rotor and also to help reduce wear and tear due to over winding. It does the latter by protecting against excessive winding speeds. Essentially the Windfang rotates six times for every rotation of the winding rotor. The baseplates of the caliber are created in high-tech ARCAP and the entire movement is precision built by hand. It offers 48 hours of power reserve.

Final Impressions of the Urwerk UR-100 SpaceTime watch

I don’t usually go to so much trouble to translate watchmking anomolies into layman terms.  That’s because I believe that watch collectors and lvoers already know a lot about movements  and how they work. Hoewver, in this instance, I had to go the distnace becuaese I believe this watch – a world’s first – is going to appeal to many a scientist, astronomer and time tracker that is not a watch collector.

The sheer magnitude of what Urwerk has managed to bring to the wrist – timing of movement of our Earth in multiple ways – is mind blowing. It not only underscores the brand’s  supreme watchmaking prowess, but also, and more importantly, showcases their pioneering spirit and desire to truly be different.

Yes, the case of this watch is reminiscnt of the late 1990’s cases (for UR-1010, 102 and 100) that underscored the brand’s “back to the future” concept of that era, but that is not a bad thing. The case has been redeisgned, features  raised, domed sapphire crystal and is more ergonoically friendly — and yet recalls early design elements.

This watch  is the essence of Urwerk … In a sort of “out of body” expeirence. I mean, it is sort of mind blowing to know that as you are sitting at your desk, or enjoying time with your loved ones, we are still in motion. I think wearing that watch would somehow make me want to be more active – to try to keep moving and living life to its fullest because time is moving forward.  AT any rate, one of the best things about this watch is the price: $49,000. Oh, and it has a commanding presence on the wrist. 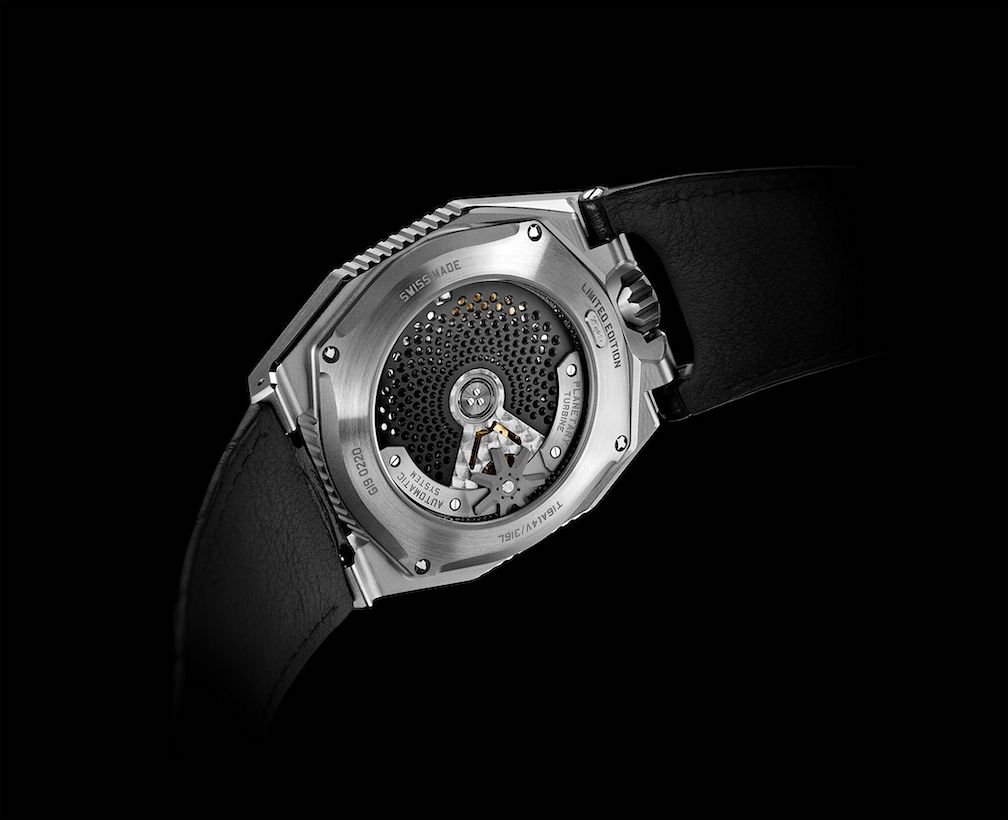 Urwerk UR-100 SpaceTime case back