Inside View: What It’s Really Like to go Aerobatic Flying …. Soaring Across the Skies with the Breitling Jet Team 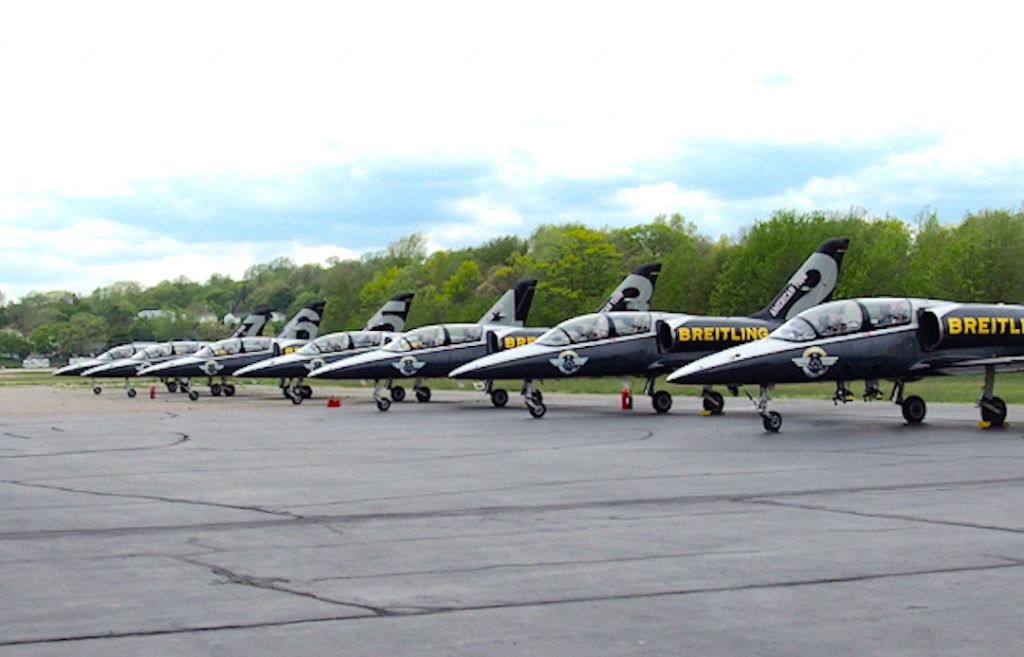 Recently, I had the incredible honor of flying with the Breitling Jet Team. While i wrote a little about that on HauteTime, i now bring you all the inside details, as well as the upside down details of formation and aerobatic aviation flying.

The day started like every other in my life. I awoke, and got ready to go to work. That was all that was the same for me. As I stepped out of the car on the East side of New York – where a seaplane awaited me – I figured my adventure with Breitling and the Breitling Jet Team was going to be an exciting one. I was wrong—it was so much more than exciting. The day was an exhilarating, adrenaline-filled adventure packed with G-forces, thrilling aviation aerobatics, fantastic formation flying, and more. 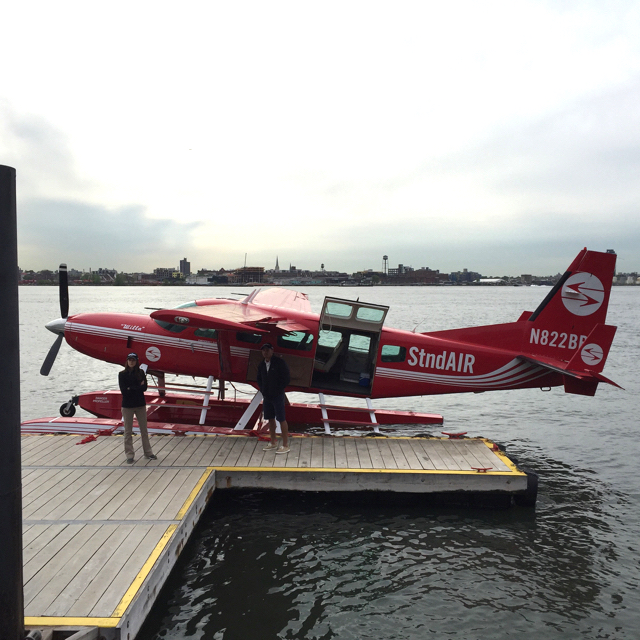 The seaplane ride from New York to Connecticut with Breitling was my first ever seaplane flight.

Perhaps what struck me the most when our seaplane touched down in Connecticut at the Tweed New Haven airport, was the fact that in front of us – perfectly lined up in majestic beauty – stood eight L-39 Albatros military training jets –noses pointed down, wearing Breitling blue and yellow colors and with eight pilots and eight mechanics standing formation in front of the jets. It was a like a scene straight out of the movie Top Gun, and I was immediately struck by the fact that these are no ordinary pilots.

I was right there. Most of the crew of the Breitling Jet Team are ex-military pilots who have dozens of years of flying experience behind them. Each has had his own tale of flying formation in the military, or of flying aerobatics. It was more than 13 years ago that the team came together to form what is the largest civilian team to fly formation: seven (the eighth plane is the backup plane). 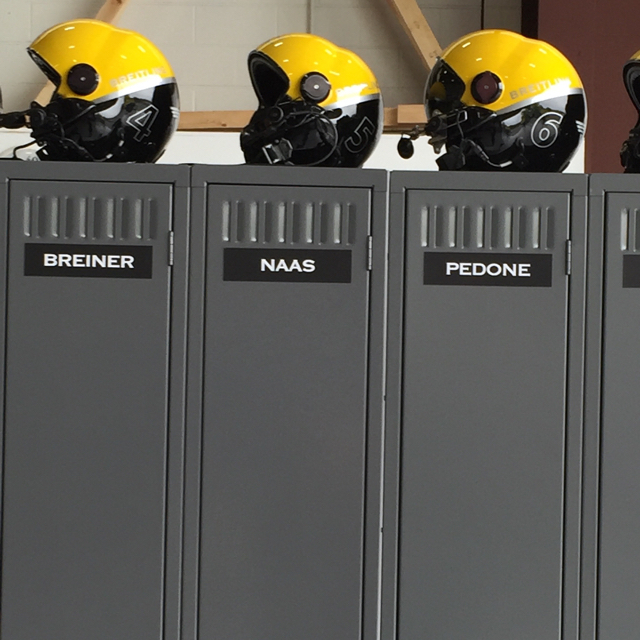 Lockers and helmets at the Breitling event.

Everyone who knows watches knows that Breitling is perhaps the brand most closely affiliated with flight and pilots’ instruments for the wrist. It therefore makes great sense that this is the company that would pioneer the way for aviation sponsorships. In fact, it was in 2003 that Breitling’s owner, Teddy Schneider, joined forces with team leader and manager, Jacques Bothelin (who had been part of the Patrouille Martini team) and put together the Breitling Jet Team.

This year marks the team’s second year on the American Tour circuit, and its last before heading back to Europe, where aviation aerobatics fans are anxiously awaiting the return. The team is an incredible aviation force that flies seven jets – flying just 10 feet apart from one another – in perfect formation, and completes a host of thrilling, precisely timed aerobatic maneuvers that have onlookers staring in disbelief at the startling sky moves that include full 360-degree rolls, straight-down dives, loops, barrel rolls and a host of other feats that somehow one just can’t equate with a machine in the sky.

The reality is that this type of flying is a blend of perfect precision by those in the cockpit – seemingly as one with the metal around them – bringing man and machine together. The pilots fly their jets at speeds of more than 500 miles per hour, and withstand G forces of 5 and 6 on a scale that would have most of us feeling sick. 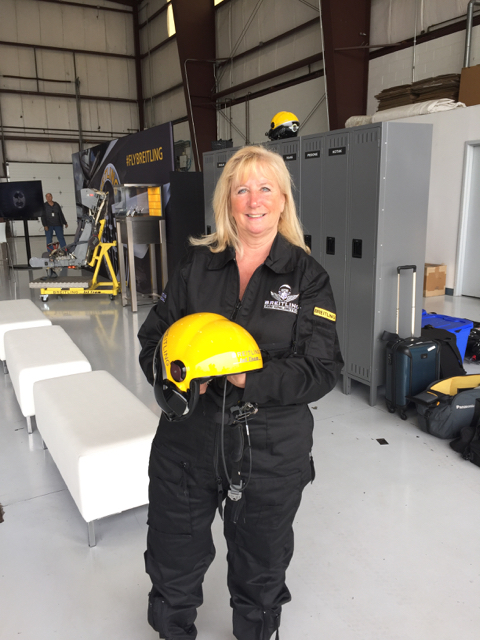 Suiting up to fly with the Breitling Jet Team

While I did not experience the higher G-forces during my flight, we did reach speeds over 400 mph and reach the 4 to 5 G-force realm (and, for the record, I did not get sick).

Before going out to join the team in flight, I suited up, received my briefing about safety, and watched how to use the Martin-Baker ejections seats – should it be necessary. Mind you, if I heard the words “eject, eject, eject” for real while in flight, I am not sure I would remember exactly how to do it, but having that briefing hit home just how dangerous the flights could be. 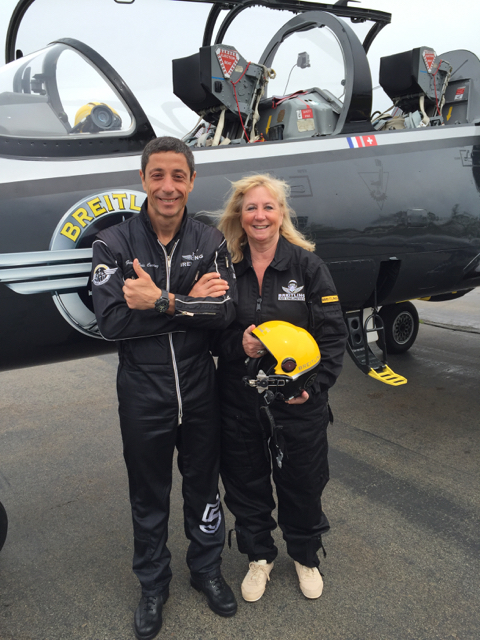 Georges-Eric Castaing (Georgio) and me after our flight maneuvers.

I had the privilege of flying with Georges-Eric Castaing (Georgio), a French pilot who served for 23 years in the French Air Force and later with the Patrouille de France. His capable and comfortable demeanor, along with his step-by-step explanation of the flight plan, put me totally at ease. Just climbing into the plane was a wonder, and, as we readied for takeoff, I marveled at the site around me. I was in a real fighter jet and – well – totally awesome.

Take off was like a surreal movie – all seven jest taxied out of their parking spaces in unison – perfectly formed, each took off in sequence and within minutes we were flying – position 5 – almost wing to wing with the planes on either side of us. I felt as though I could reach out and touch the plane next to me and I suddenly realized that one simple move of the throttle could put all of us in danger. 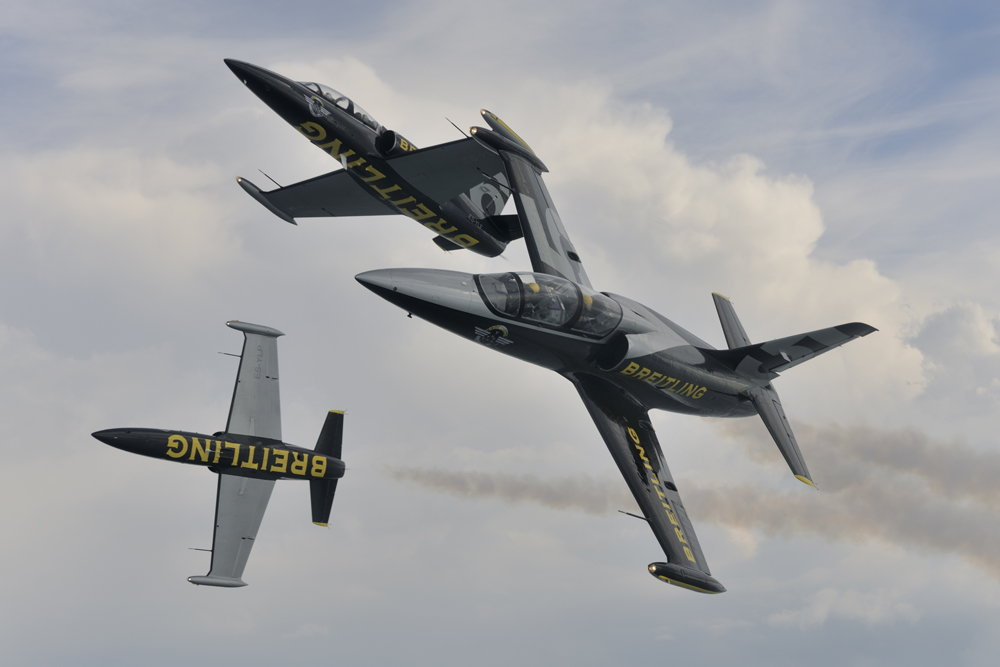 As we arched sideways over the water—all seven planes arched as one. As we maneuvered left, right, up, down, over and around – we did it as one. Formation was only broken to gain a little space between planes for the loops, rolls and other incredibly gravity defying moves — but even those were perfectly choreographed – synchronized better than the famed Rockettes and their dancing legs.

Indeed, while it looks like an air show of fun and excitement, it is instead an extremely precise and exacting orchestration of man and machines.

After about 20 minutes in the air, the seven planes flew formation back to the strip and again landed in sequence, ready to take up the return to Breitling tarmac. The experience went beyond the flight, beyond the views of wing tips above me, below me and on either side of me. It went beyond the thrill of aerobatics. It cut to the core. These were military pilots doing what they do best – bringing machines to the ultimate limits and doing it as a team, each man keenly aware that his teammates life is in his hands. 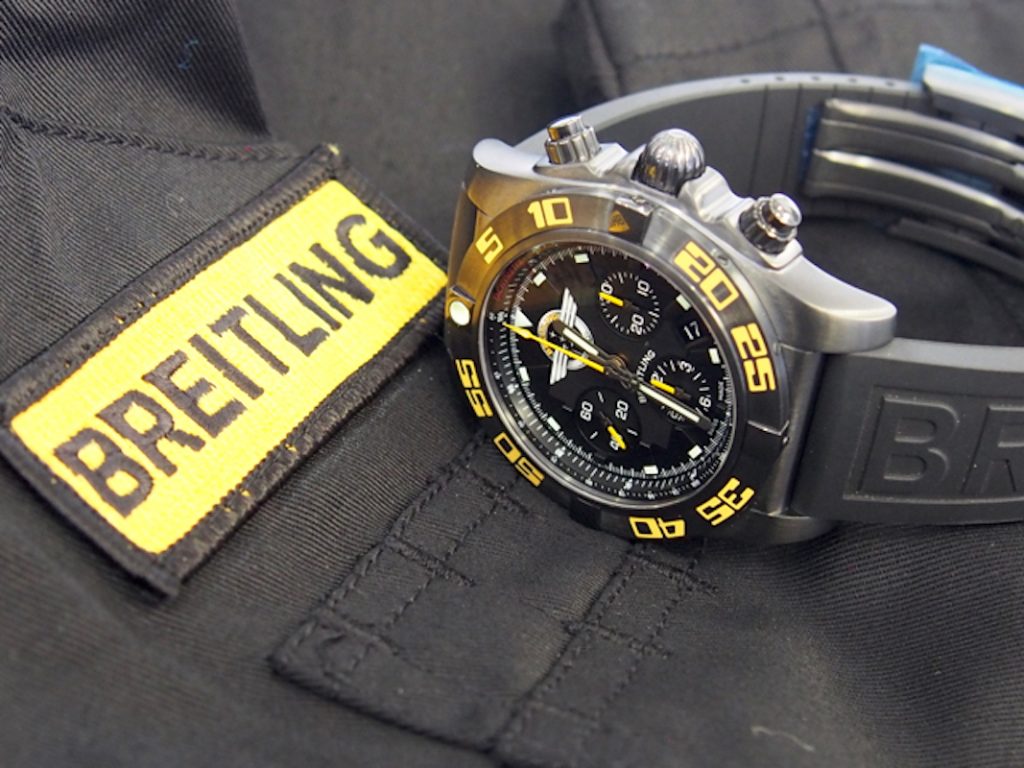 Once we exited our planes, we had time to talk with the pilots at great length about what drives them to do this work – but that is another story – and I will bring it to you soon enough. For now, suffice it to say that having the Breitling Jet Team tour America for a second year is exciting, as it gives more people access to see the perfectly choreographed blend of man and machines.

The fit of the jet team and Breitling makes perfect sense – man and machines. Breitling is always on the pioneering side, the cutting edge, when it comes to bringing even greater ingenuity and excellence to its flight instruments and other timepieces.

In fact, of late, Breitling has introduced new ultra-light materials, and connected watches; It has brought the tried-and-true slide-wheel and navigation tools to new heights in new and updated versions and has finally been able to bring the potentially life-saving Emergency watch to America (this watch, when activated, sends out a distress call on a special highly monitored frequency). 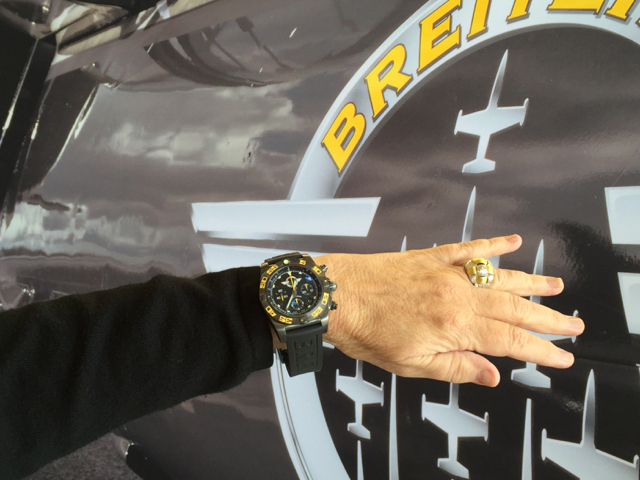 If you are in or nearby a city when the Breitling Jet Team is flying – I urge you to go. It is a site not to be missed. The schedule for the rest of the year includes stops from late June through October in places such as Salt Lake City, Utah, Oregon, British Columbia, Michigan, Toronto, Miramar, San Francisco and Huntington Beach.

Oh those magnificent men and their flying machines. 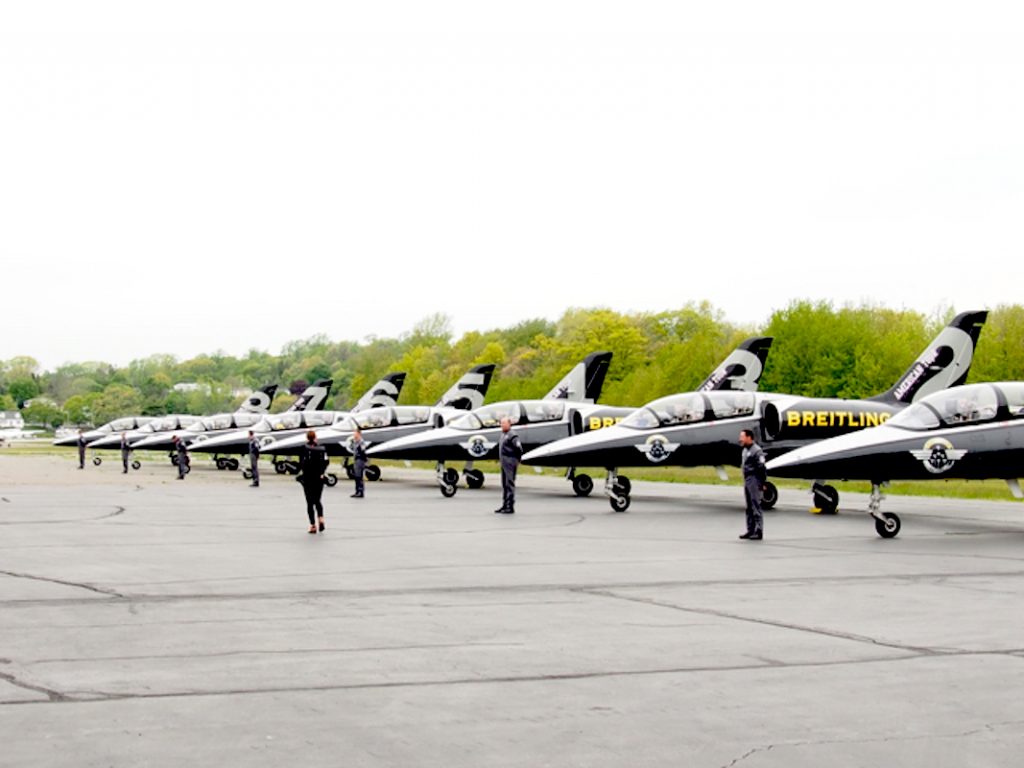 The men and machines were so coordinated that they were like a single carefully orchestrated procession of precision and excellence.