Inside the NB Center for the Ultimate ‘Cars and Watches’ Event: Nicola Bulgari’s Vintage American Cars and Bulgari Complicated Watches 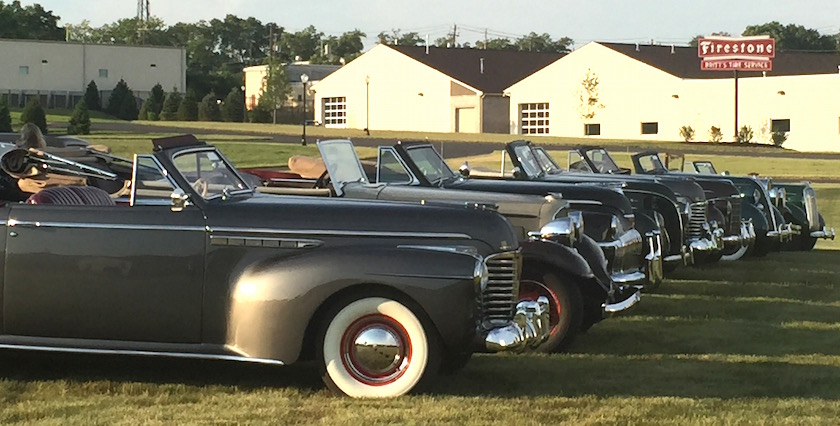 It was sort of a surreal moment. Being driven into a compound, getting out of the car in front of a full stone lodge the size of a small boutique hotel, and walking out onto the terrace to find nearly 20 of the most stunning fully refurbished 1930’s and 1940’s American cars lined up in front of a huge drive-in movie screen. It’s the type of picture-perfect moment that burns a space in your memory. It’s the moment that I joined Bulgari for the brand’s first-ever “Watches and Engines” event in Allentown, PA, at the NB Center for American Automotive Heritage – where Nicola Bulgari strives for perfection in restoring classic American every-day drivers.

These beautiful cars that are restored to their original state are the perfect complement to the brand’s highly complicated and elegant timepieces unveiled this year and also on display at the event. The concept behind “Watches and Engines” was to present the perfection, excellence, excitement and elegance of both of these mechanical categories. It worked. 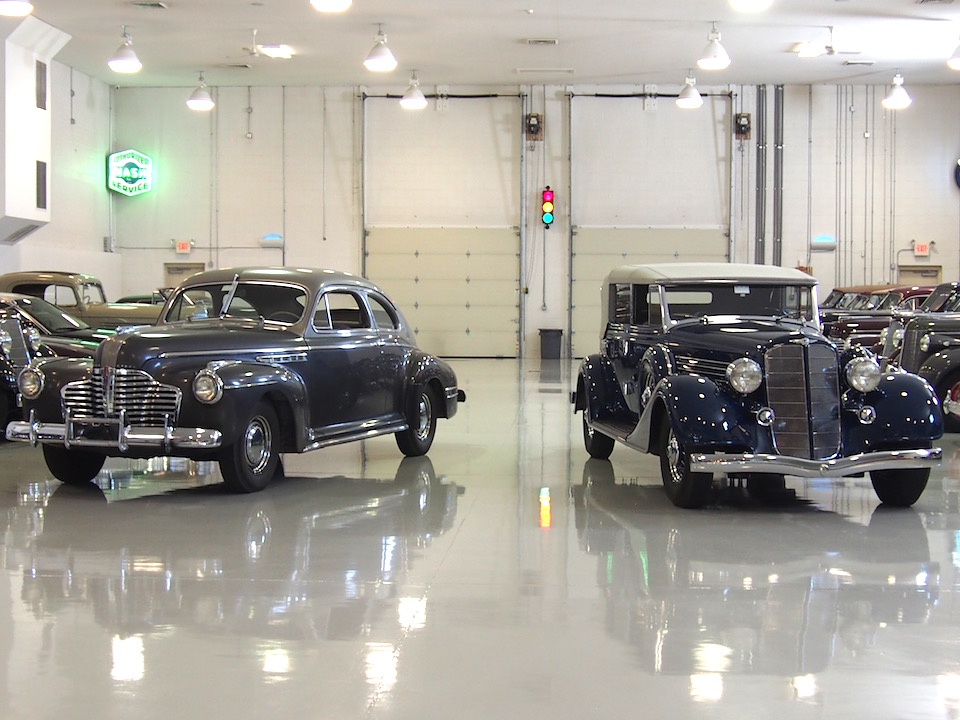 The 76-year-old Nicola Bulgari, great-grandson of the founder of Bulgari and Chairman of the brand that is now run by LVMH, learned to love cars as a youngster growing up in Rome. It was in the late 1940’s and early 1950’s when Rome was a lure for Hollywood, and many movies were filmed right up the street from the Bulgari flagship store at   landmark locations like the Spanish Steps. He would watch the motorcades of long, sleek, curvy American cars pass by and wonder at their lines, architecture and elegance. A few years later, he saw similar cars during a tour of the Vatican – in the garage of the Vatican – and vowed to one day one them.

In the 1970’s after he had moved to America, Bulgari needed one of his cars restored; he was directed to a restoration expert, Keith Flickinger, in Allentown, PA. That was the start of what would become a life-long friendship, a national rated museum, a full-on restoration division for American vintage cars, and the recently opened division for researching and documenting the pedigree of vintage cars owned by others. To be fair, there already was an auto museum on the property, but it was struggling. Bulgari bought it and infused it with new life, bringing in much of his car collection, as well as strong financial backing to elevate its stature and visibility.

Woodie, once driven and owned by Bette Davis, is now a part of Bulgari’s collection. (Photo:R. Naas, ATimelyPerspective)

Bulgari’s passion is for the every-day-driver cars – the Oldsmobiles, Buicks and similar cars of the 1930’s and 1940’s and today he owns a collection of more than 200 cars – including the ones from the Vatican.   While Bulgari has many cars from his collection in Italy, the lion’s share – about 150 or so – are on the complex in Allentown – where he is raising the bar on awareness and restoration of vintage American autos with a goal toward preserving history for the future.

Among the cars on the estate: the 1940 Buick “Woodie” that Bette Davis owned and drove in Now, Voyager, and the 1929 GMC yellow cab from It’s a Wonderful Life, and others. Not only does Bulgari want to preserve these parts of our past, but also he insists they be driven. Being in a museum is nice, but doing what they were built to do is nicer. For this reason, many of the cars travel to important shows, such as the Goodwood Festival. 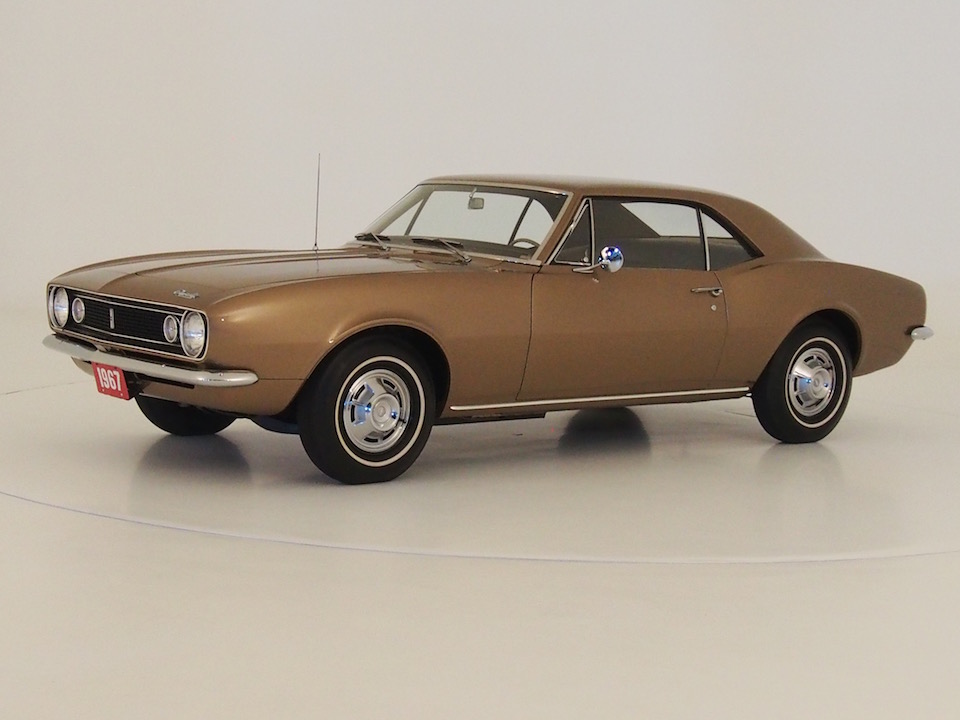 The first-ever Camaro, 1967, was being documented in the NB Center (Photo: R. Naas, ATimelyPerspective)

As to the new division, wherein experts document collectors’ cars and establish the pedigree or provenance of a car, the concept is to offer a complex history of ownership– much like a fine wristwatch, whose traceable pedigree makes it much more valuable and interesting. Among the cars on display while we were touring the “documentation” garage: the number 00001 – yes the very first ever made – 1967 Camaro; as well as a Corvette prototype designed and built by Carroll Shelby along with Sergio Scaglietti (who had to work on the quiet side on this project since he was designing Ferrari’s at the same time). The car was built using a 1958 Corvette chassis and was so close to going into manufacture, with the plan   pulled only days before going to production, according to Flickinger. 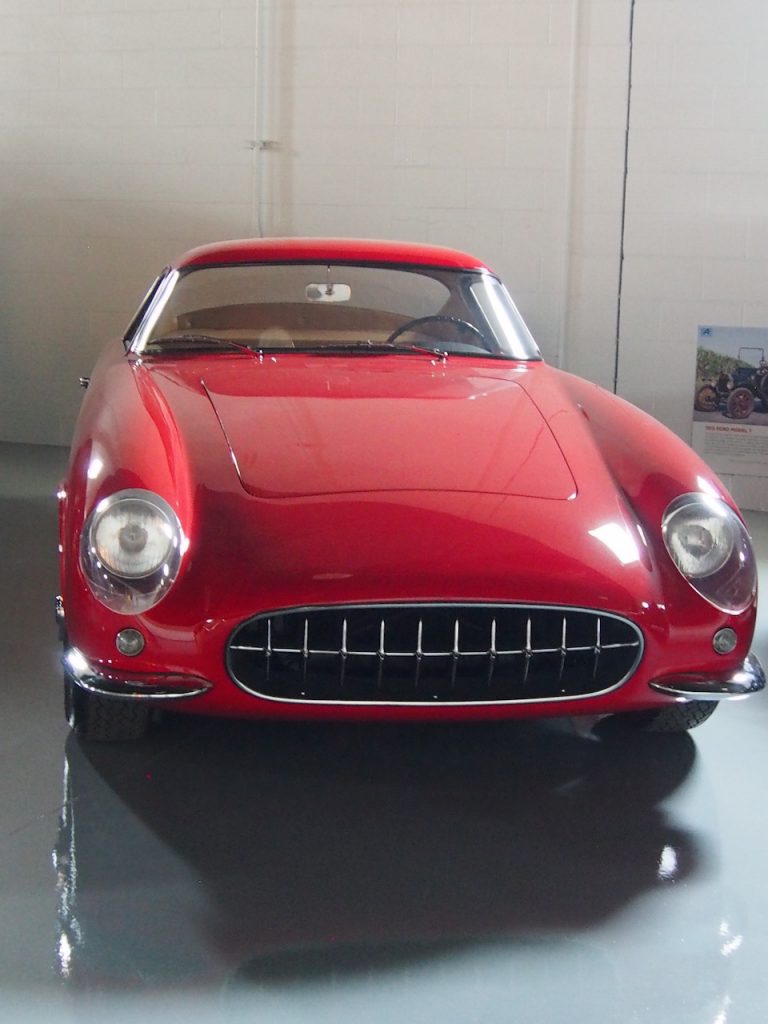 Interestingly enough, the compound also plays home to one of the oldest and largest-ever drive-in movie screens, a holdover from half a century ago. Nicola Bulgari, who insists the cars be driven, is fond of parking them on the grass in front of the screen for guests to indulge in a movie. During the Watches and Engines event, I selected a grand Buick Eight as my seat, and was treated to a sort of eclectic fit of a movie: Talladega Nights. 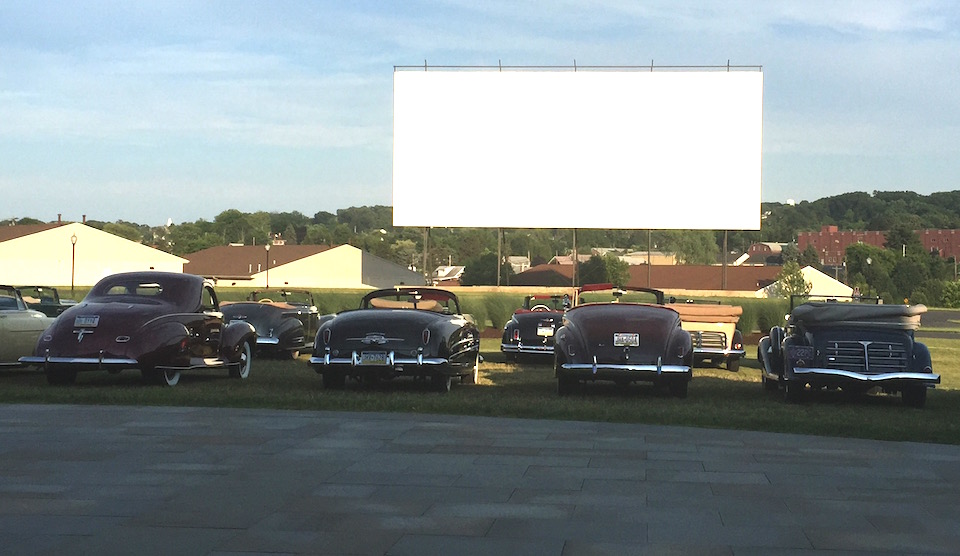 The drive-in movie screen on the NB Center property is one of the largest ever built in its day. (Photo: R. Naas, ATimelyPerspective)

Recently, the building of a stunning luxury lodge also reached completion. The estate, with stones harvested from local farms to ensure grassroots authenticity, is designed to host guests for various occasions – such as this first-ever Watches and Engines event.

On display in the stone-and-glass property (one entire wall of the building is glass windows and doors leading out to the patio and lawn) were some of the Bulgari brand’s most celebrated complicated timepieces. Among them: the record-breaking Octo Finissimo Minute repeater, the world’s thinnest repeater on the market. This timepiece made headlines around the world earlier this year when it was unveiled at Baselworld 2016. It follows on the heels of the 2014 unveiling of the Octo Finissimo Tourbillon (also a record breaker in its time). This timepiece was also on display. 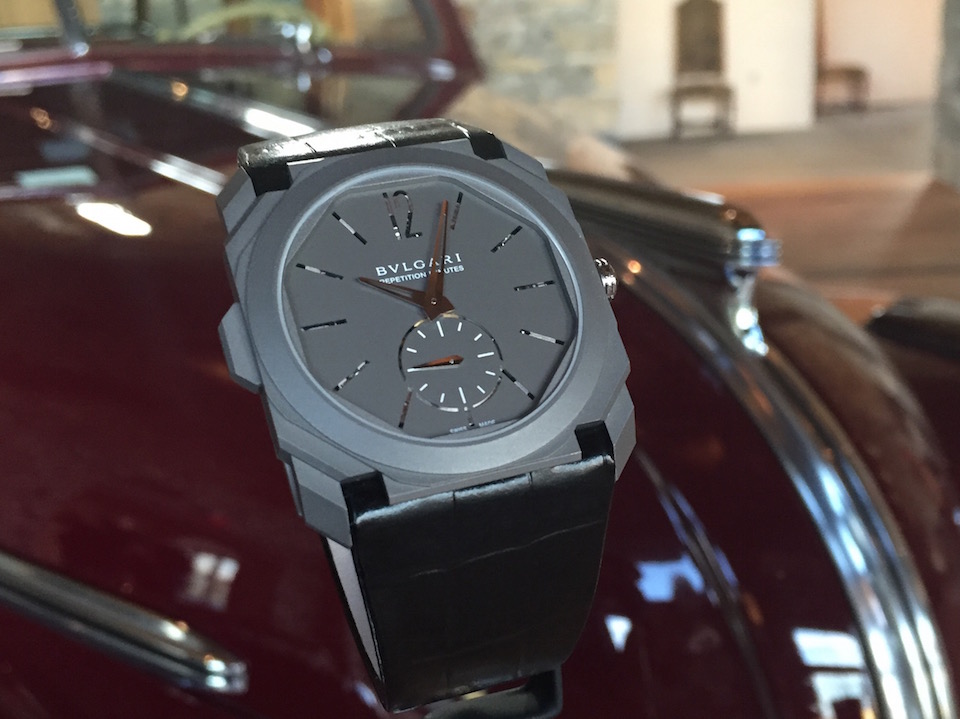 For me, being both a car lover and a watch lover, the Watches and Engines event hit home – stirring an ache in my heart that left me unsure what I wanted more: the cars or the watches. Fortunately (or unfortunately), I don’t have the finances for either. 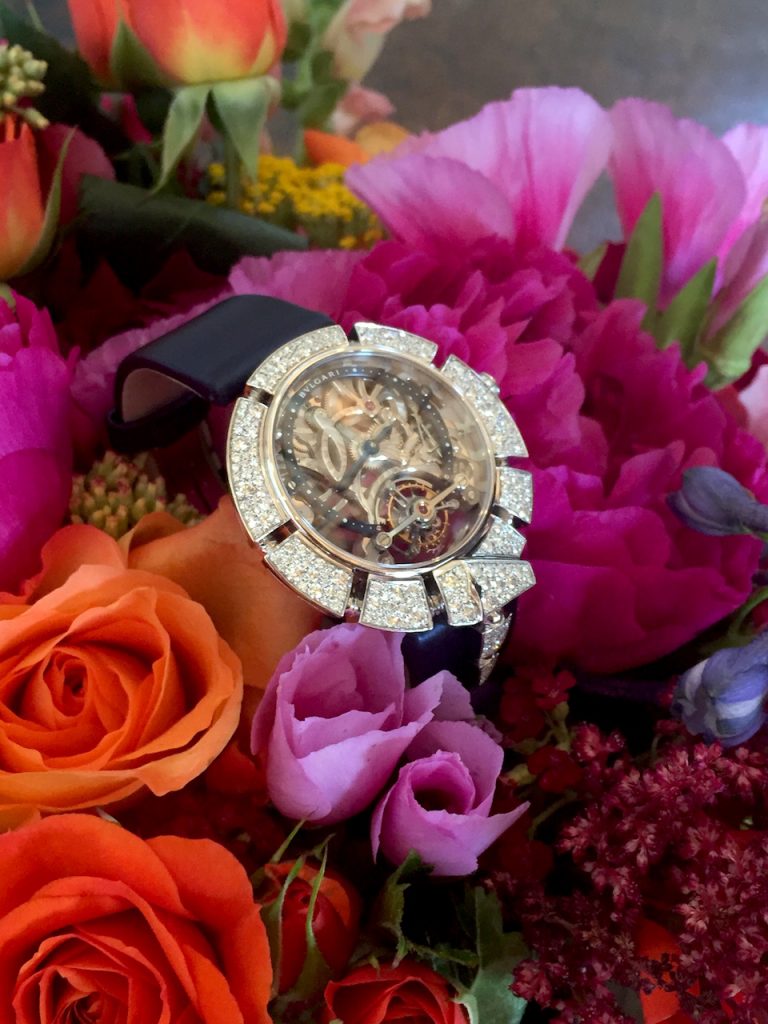 But, for the record, while totally enraptured with the pale yellow 1930’s Oldsmobile, the car that stole my heart for the “Engines” portion of the event was the 1940’s Buick Super Eight convertible that I sat in during the movie. The timepiece that stole my heart was, of course, the Octo Finissimo Minute Repeater – music to the ears, a delight to the eyes and a mechanical work of art. 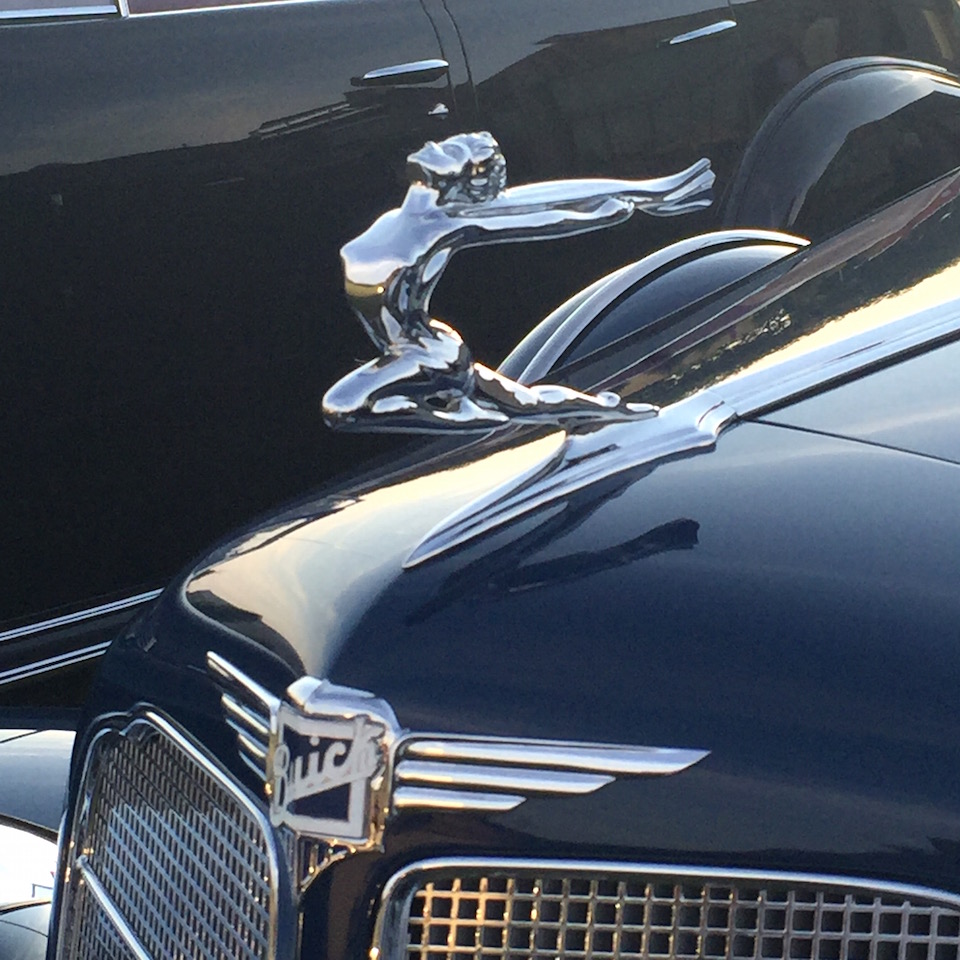