Inside Havana, Cuba: Five Things You Must Do in Cuba in Three Fast Days of Delight

Yesterday we brought you a look at the recently revived St. Petersburg-Habana Regatta, officially timed by Ball Watch USA. Today, we bring you on the rest of our journey in Havana — a look at three days of delightful experiences. Learn what you need to know for three fast days in Havana.

One step outside the Havana airport and you feel as though you have been transported in time. Dozens of old cars wait to transport people. (Photo: R. Naas)

Because yesterday we jumped right into the reason I was in Havana to begin with, I skipped the entry port.  Before I go on, I want to describe what it’s like to arrive in Havana for the first time. In short, it is an interesting experience all by itself. The airport this capital city of the Republic is small, and the arrival building is a tiny brick enclave with pretty much nothing in it.  Look for a chair and you won’t find it. Minimalist is the perfect term. But that’s ok, right from the get-go, the people make up for it.

From the minute you step outside the airport doors, you know you have stepped back in time. The cars are exactly what you would expect: a mix of old salt-air-beaten rusty jalopies and shining well-cared-for vintage beauties. The tropical temperature (of about 77 degrees Fahrenheit) yields lots of khaki-colored and white clothes, but always with a powerful punch of color or floral prints. Straw Panama and Cuban style hats abound and, if  I didn’t say it already, smiles are everywhere. The Cuban people are resilient and friendly and like to look for the best in everything. 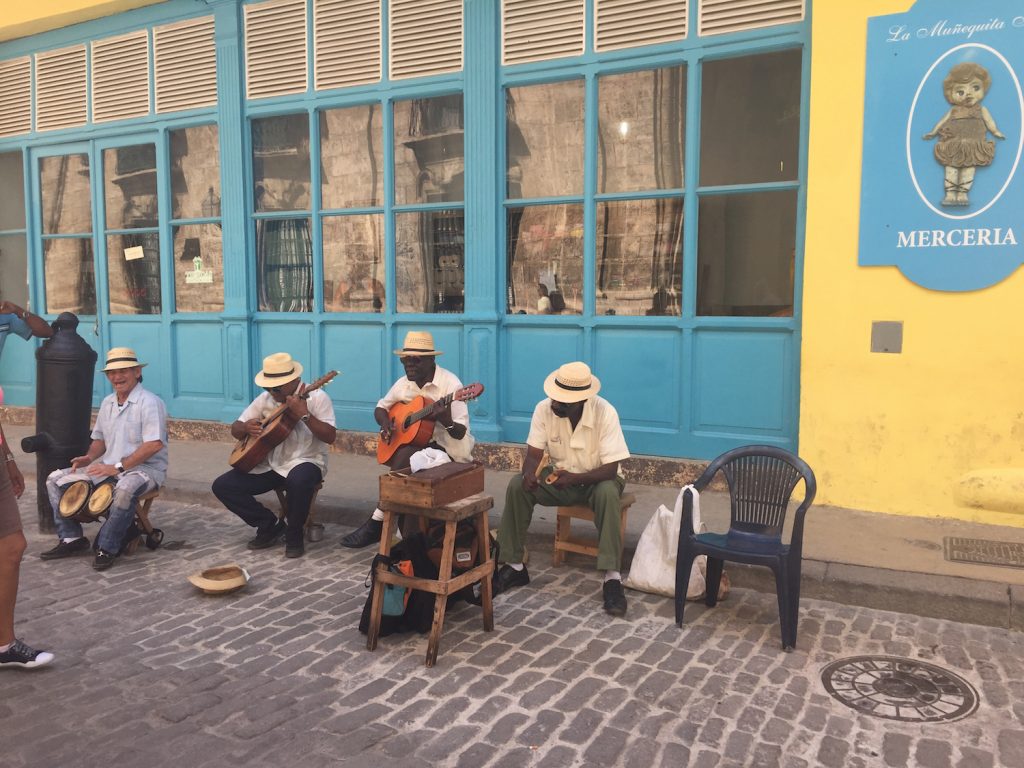 First stop for me was, as mentioned yesterday, was Marina Hemingway. The ocean rolls in on one side and a three-fingered marina plays home to a variety of small hotels and shops.  Truly, unless you have something to do here on the sailing side, this may not be a stop for your short vacation. Following a visit to the marina,  the yacht club and a few boats, I got settled into  my hotel, the Melia Cohiba (see below),and then made my way to explore the riches of old town Havana. 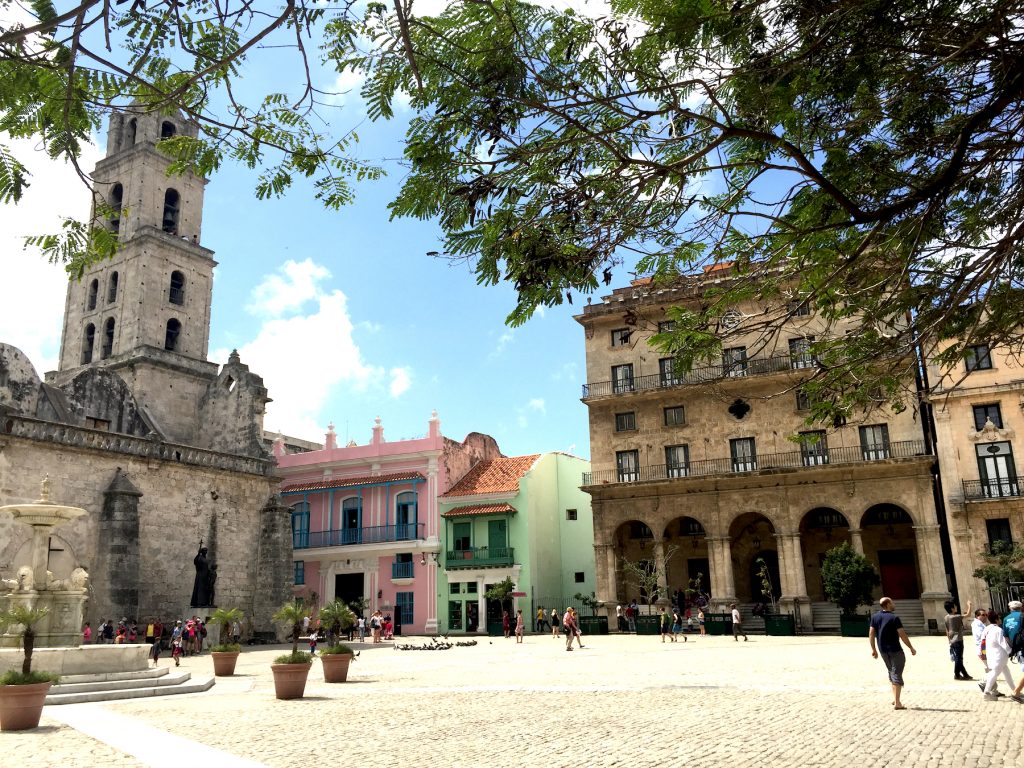 Each plaza in Old Havana is more beautiful than the previous one. (Photo: R. Naas)

Havana is a cosomopolitan city with great architectural diversity and unusual cultural flair.  Hospitality awaits on every corner and it is absolutely fine to slip into one of the many bars for a drink, stop in at a night club and take in the music or simply walk the cities and be inspired by the beautiful people. Old Town Havana is a great example of the history and culture of the city. Comprised of several squares, called Plazas, it is very walkable. The highlights are many, so plan to spend a few good hours there. 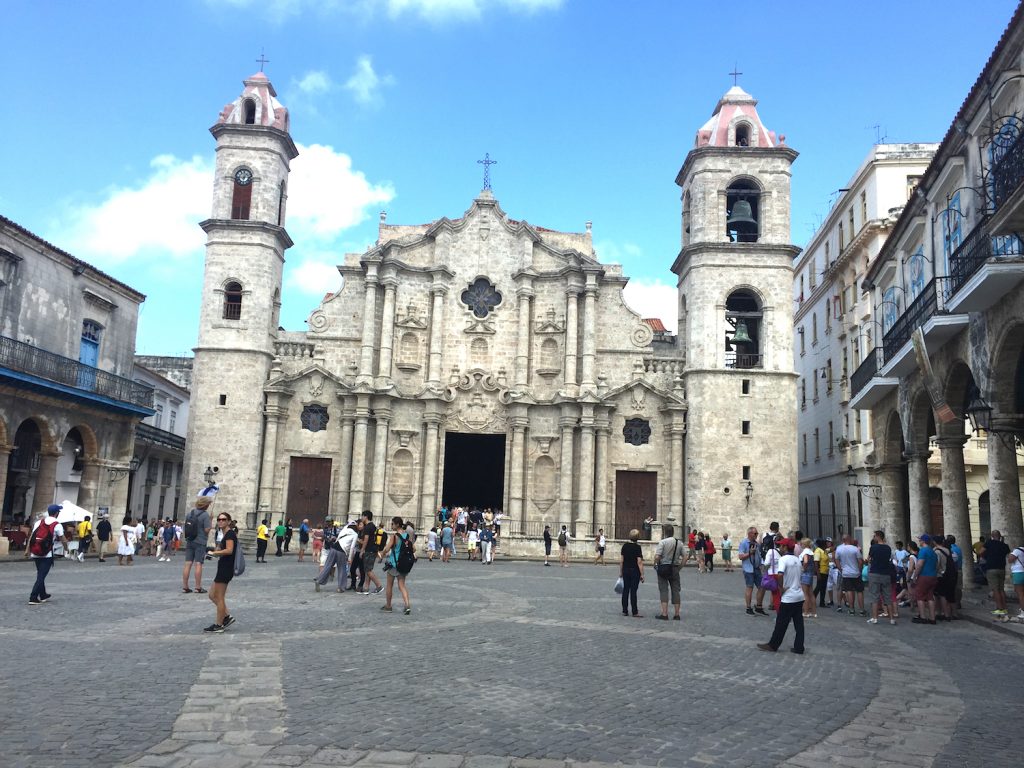 Old Havana is a series of plazas and cobblestone streets that you can walk for hours.

I started on the tourist route before going astray on my own. That means, the first stop was the local hotel — Hotel Ambos — where Hemingway kept a room (that room is now made into a tiny museum). A walk inside the hotel shows the ambiance we can imagine was the highlight of the 1930’s,40’s and early 50’s — with ceiling fans, a piano, overstuffed seating and a magnificent bar. Naturally after touring the tiny room that was Hemingway’s, I had a Mojito at the bar and continued my stroll.

The city is made of many squares that range from Plaza Vieja in the center of old town, to the Plaza de la Cathedral (with a stunning church), to the Plaza de San Francisco, named for St. Francis de Asis, and where there is a lovely Franciscan monastery. The square boasts a beautiful fountain. No trip is complete without stopping at the Plaza de Armas, the first-known public square in Havana. 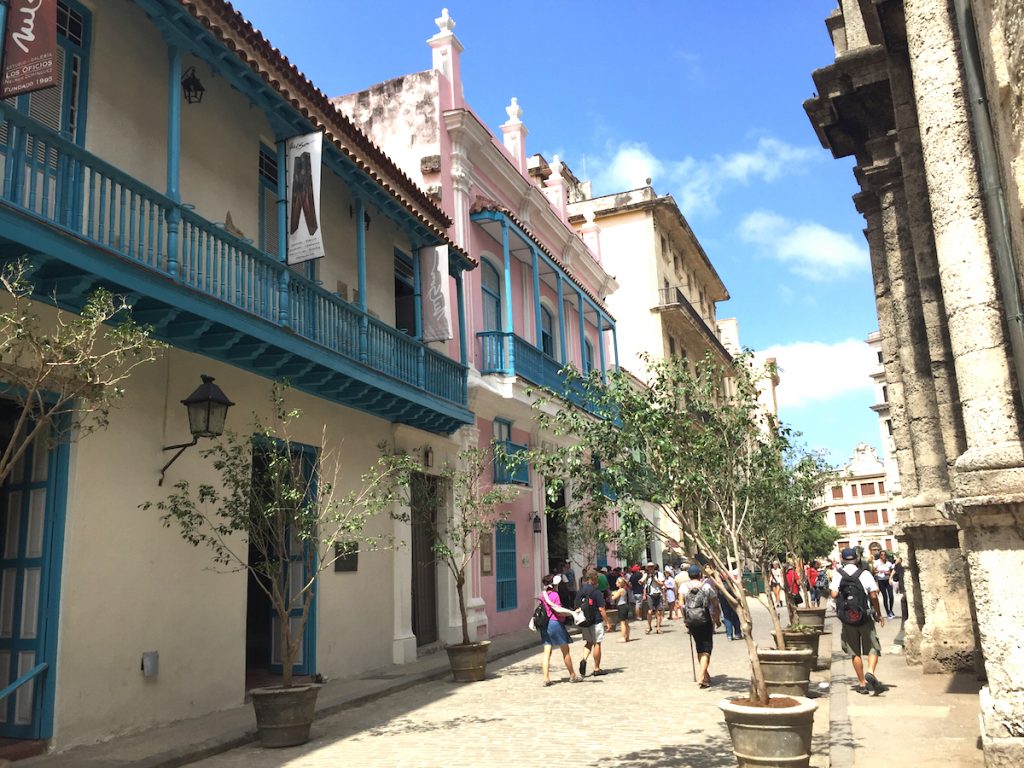 Streets are lined with people day and night and the colors ring true of Caribbean tropics.

In addition to cobble stone streets (that are often a bit tattered and hard on the feet) lined with colorful buildings and shops galore, there are a host of fruit stands, tourist-trap stands, restaurants and bars to occupy your time. There are dozens of tiny streets that jut off the main street, and don’t be afraid to take them. Some take you off the beaten path and into tiny treasures like art markets. I even found a great book market (but all the books were in Spanish and I don’t speak it). Still it was an adventure.   Don’t leave without a visit to Bodeguita del Mediothe — where, along with Floridita, Hemingway frequented. 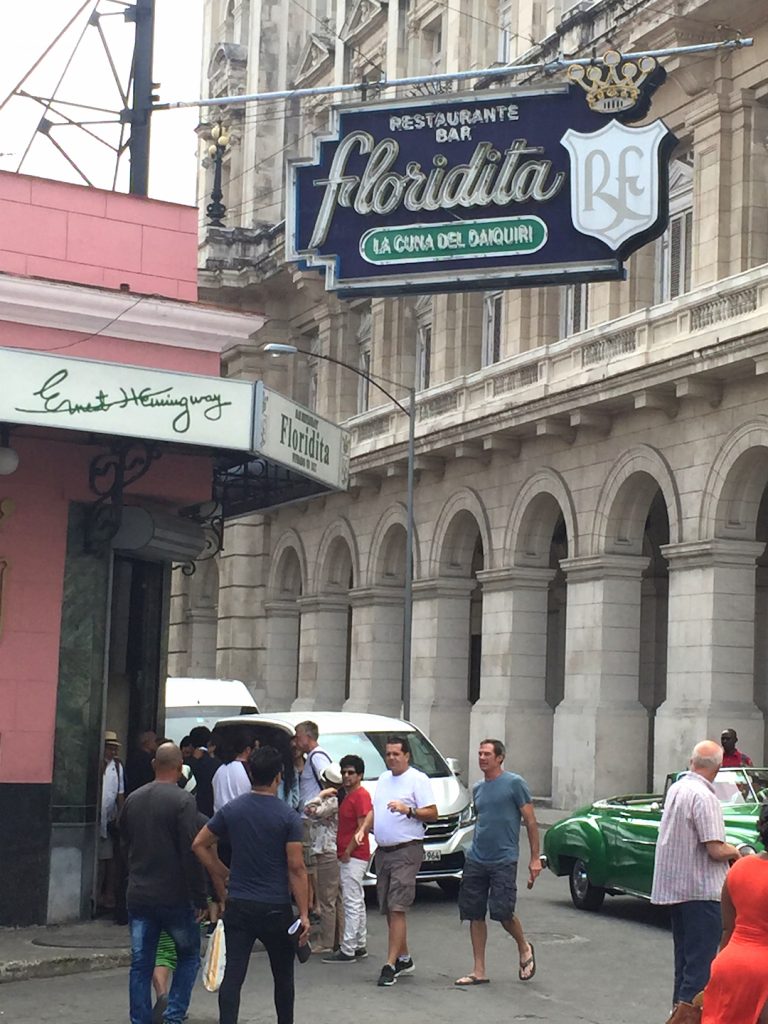 Floridita was one of Hemingway’s haunts — and the restaurant/bar keeps a bust of him in the corner of the bar where he typically sat.

If you have time left in the day, do what I did. I strolled along the famed Malecón, a pedestrian walkway that treats for nearly five miles and runs along the sea, with just a small wall separating street and ocean. One of the days I was in Havana, the winds were so strong that huge waves rolled in right over the wall crashing on the streets so strongly that cars could not drive on the road.  On a nice day, it’s a wonderful walk, often spiced with musicians or artists performing or enjoying the view. 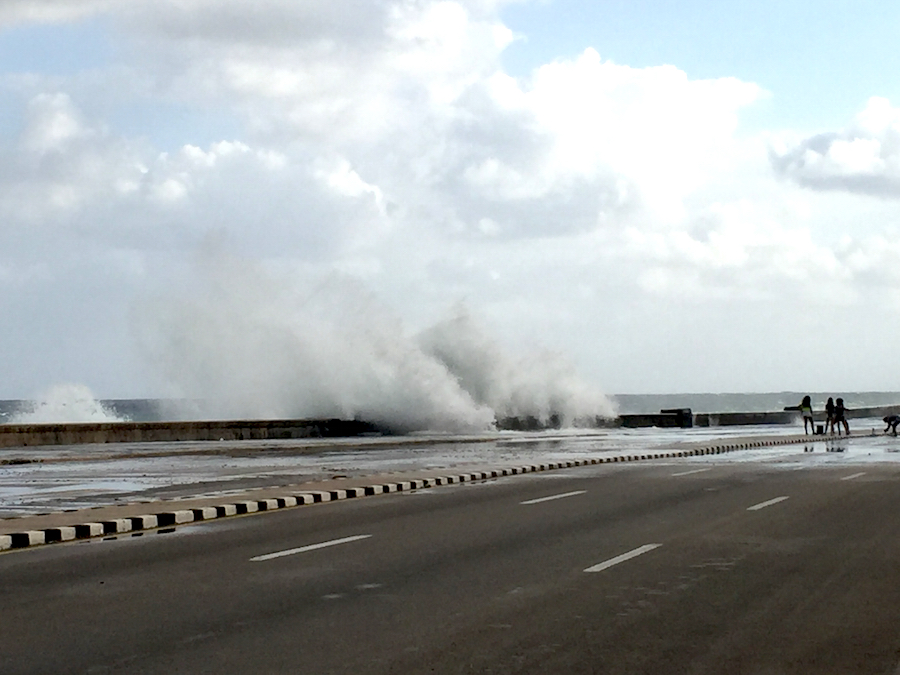 On a nice day one can walk the Malecon, the pedestrian walkway with a wall between it and the sea, for miles. 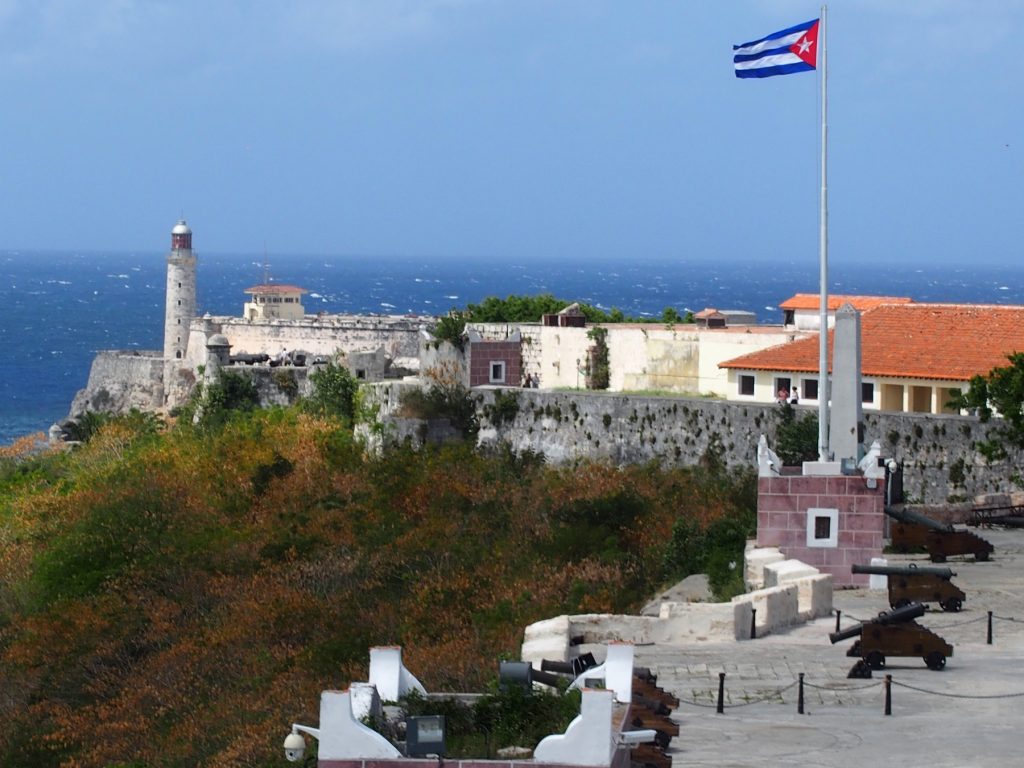 Castillo el Morro in Havana is an ancient fort and castle, that today is a museum and meeting ground.

Not only is Old Havana a wonder, but also the historic richness of the city must be explored. I spent half a day wandering the vast castles and forts. Easily one of the most fascinating stops is the Castillo el Morro — built in 1589 and completed in 1630. The castle and adjoining fort is built on the cliffs overlooking the sea,  and served as a military fort for centuries. Today it is a museum, and a public gathering place. 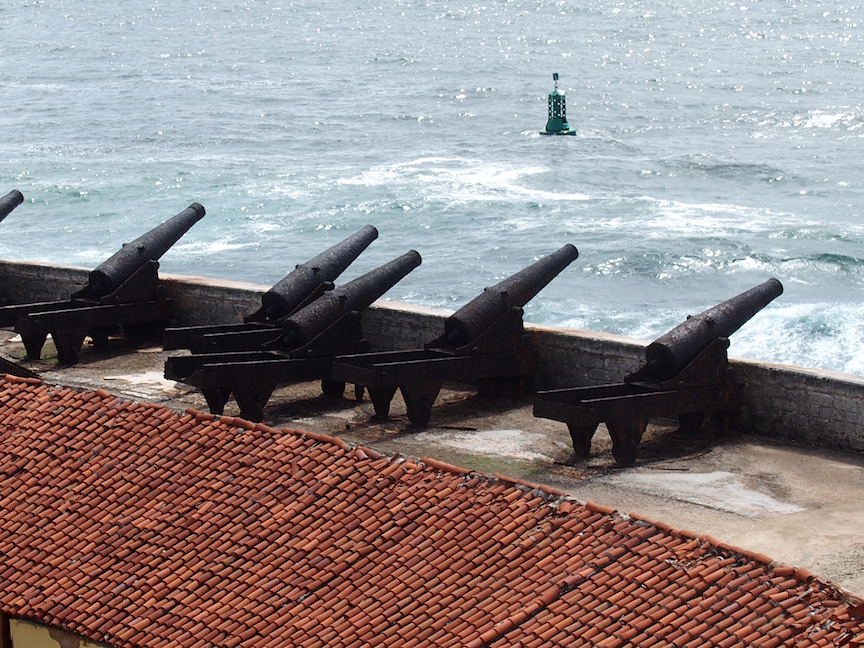 The forts and Castillo al Morro on the cliffs overlooking the sea are a historical highlight of Havana.

Also of note is the massive capital and the Plaza de la Revolution with an architectural structure whose modernity looks almost out of place in Havana. However, juxtaposed to that structure,   right across the square (plaza), are huge neon lights that form the key rebels in the revolution and the new regime. 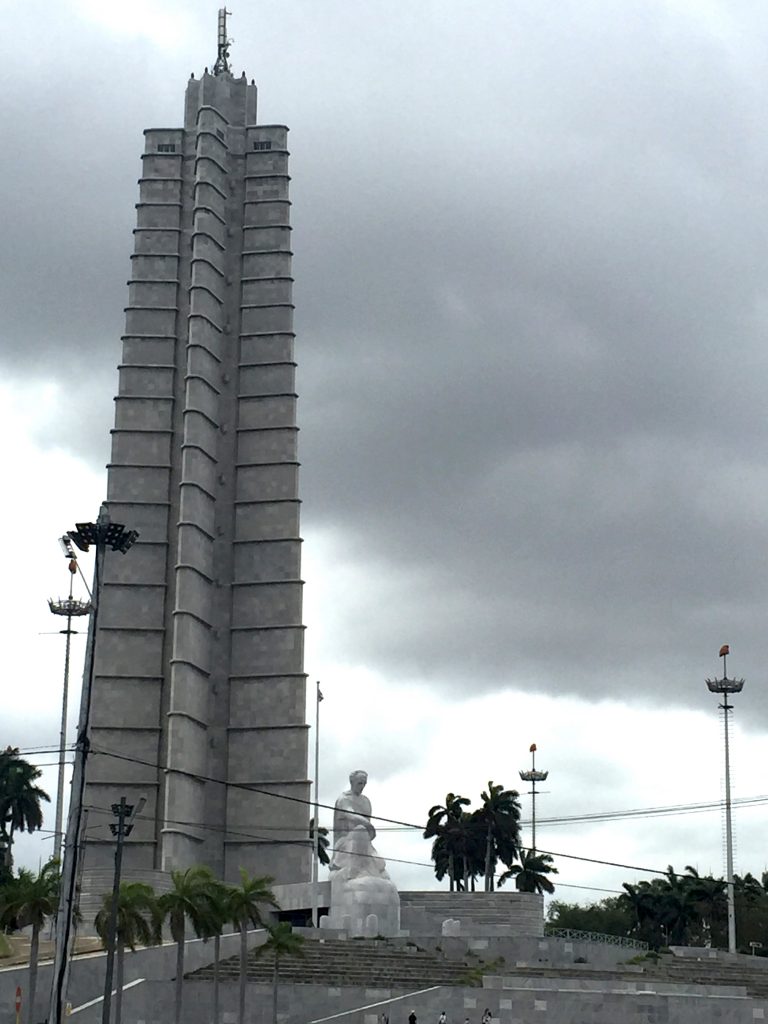 Once you’ve passed through the city, a trek out of town is in order. If you are a Hemingway lover, you will want to visit his favorite fishing village, where the local bar and restaurant, La Terraza De Cojimar,  still holds his corner table — cornered off with velvet ropes — for patrons to admire. 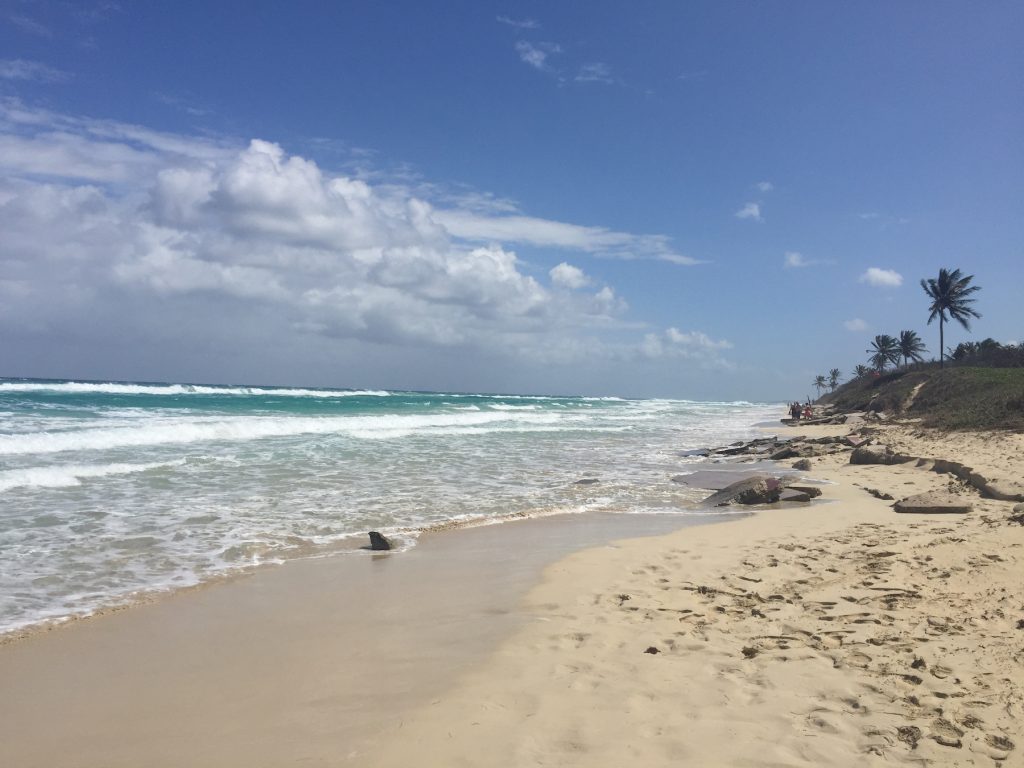 Playa Santa Maria is a small beach that lies on the route from Old Havana to Finca Vigia. (Photo: R. Naas)

From there, drive out pas the lovely Playa Santa Maria — a wonderful white-sand beach (where, I must admit, I stopped for a while)  — and travel on to Ernest Hemingway’s home, Finca Vigia. Now a museum, the house and adjoining grounds are said to be left exactly as Hemingway had decorated them during his life in Cuba. 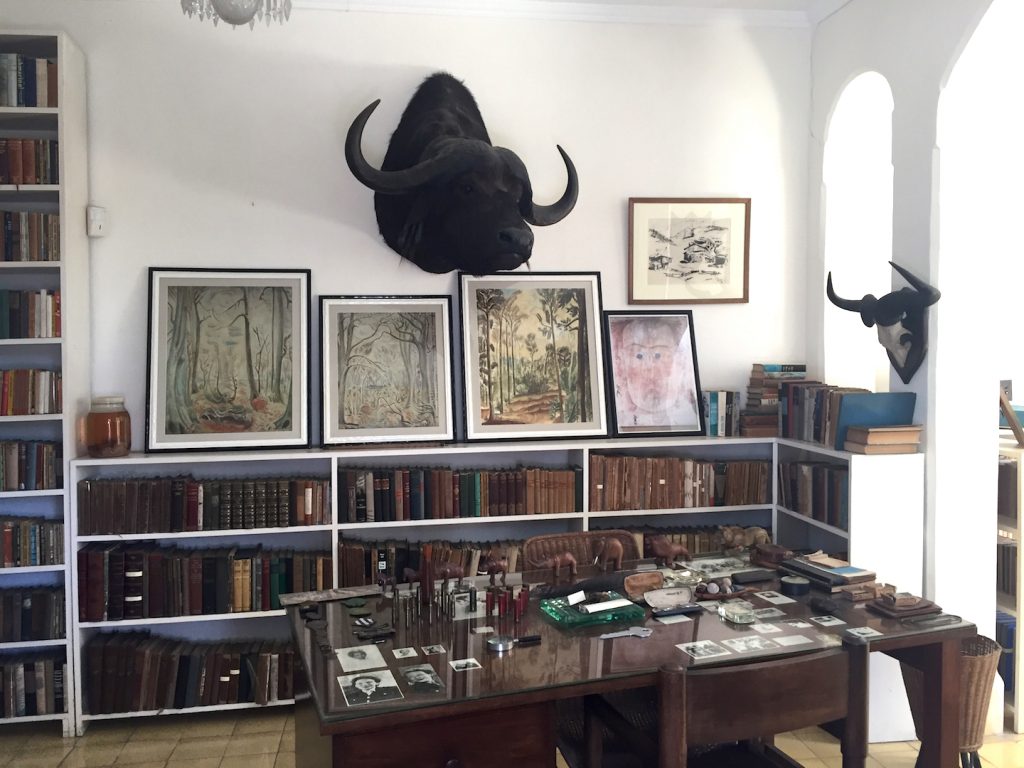 While you can’t go inside the house – the doors and windows are open for photos. And, truth be told, I actually stepped a couple of feet in to the living room — just for the thrill of saying I was in his house. The furnishings are exactly what  a Hemingway lover would expect. Those who know him know he was in the war, he was a hunter, a fisherman and a lover of art. The house is chocked with personal possessions from his world travels, including posters, and worldly art. The walls are filled with  the heads of animals he may have hunted himself, as well as fishing gear and hunting rifles. 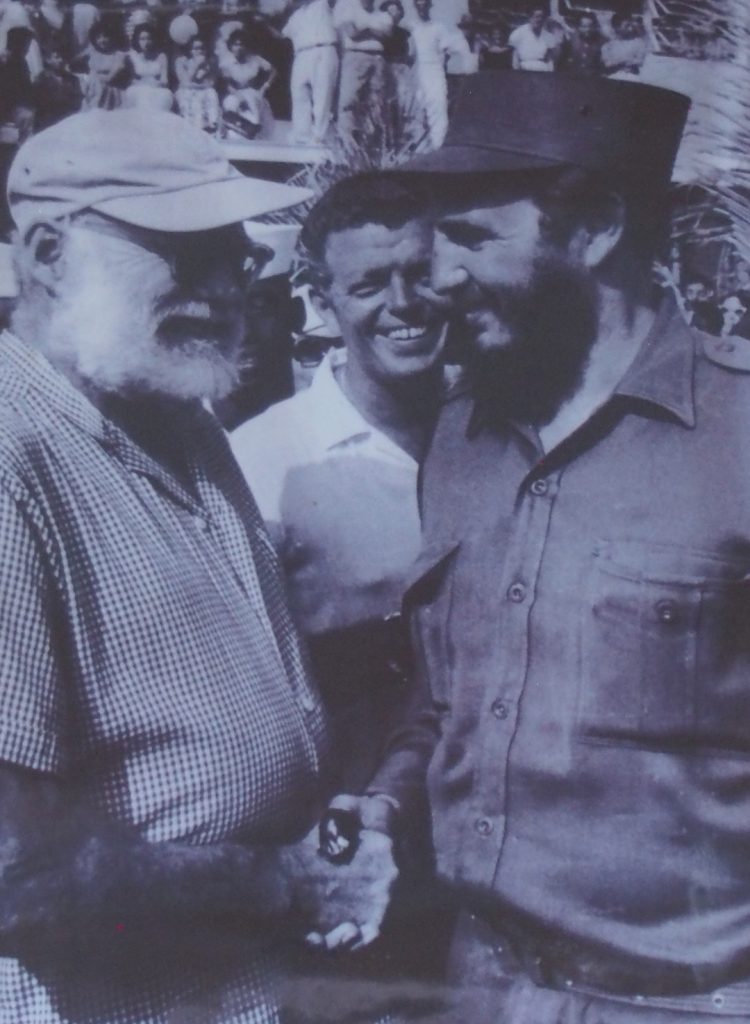 Hemingway was an avid fisherman. This photo of him is in the fishing village he frequented.

Adjoining the house is a spiral staircase that leads to his private hide out atop the light-house-like structure. There, in a room lined with books and two desks, sit a telescope and typewriter side by side. It is all a bit surreal. On the property is also Hemingway’s fishing boat and the empty pool that was once the center of entertainment. In fact, Hemingway had one of the first residential in-ground pools in Havana and it remains one of just a handful of private pools.

There is so much more to tell about Havana, so many more places to see .. but that will be food for another article.

Havana, Where to stay:

Hotel Nacional de Cuba  for the classic Havana experience. It’s on the water, you can walk the bunkers and the outdoor seating for sipping mojitos is superb. Rooms are older and a bit dated. Nestled in the outskirts of the old town, the hotel sits high on a hill with superb water views. 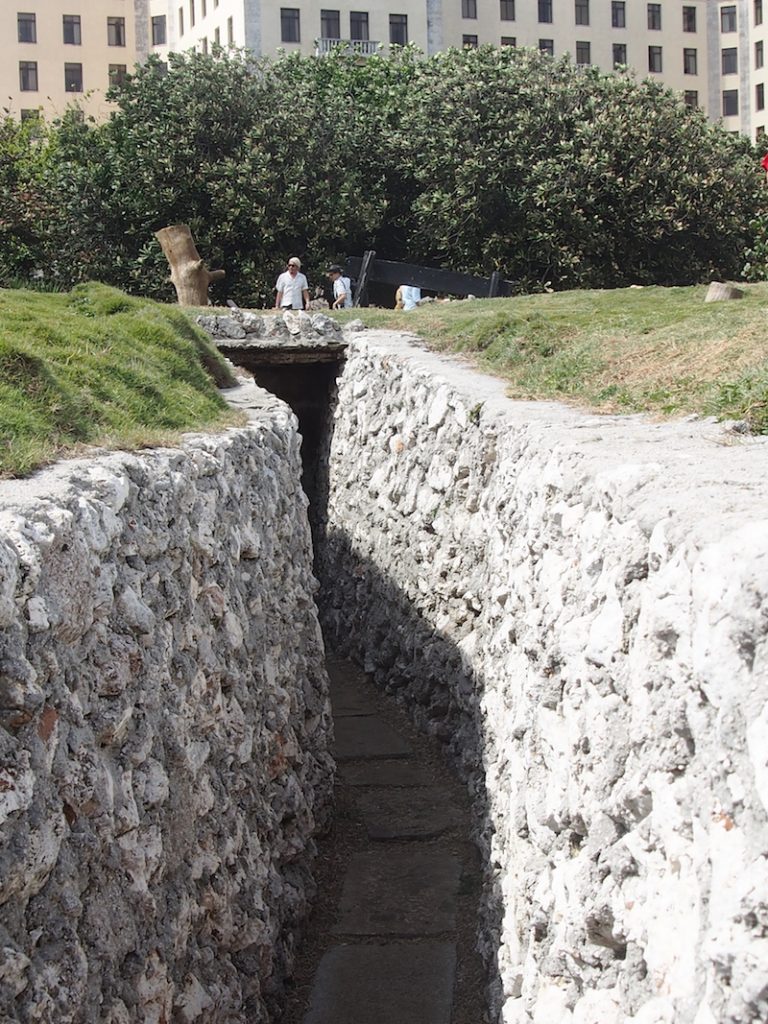 If you stay in the Nacional Hotel (partially seen in the background), you can walk the grounds and visit the bunkers built underneath the hotel built do defend Havana back in the mid-1900’s.

Melia Cohiba Cuba for the more modern experience. Internet in the lobby — though don’t expect much, this country is off line still and that is part of it’s charm. The hotel sits opposite the famed Malecon walkway along the walled divider that separates street from sea. 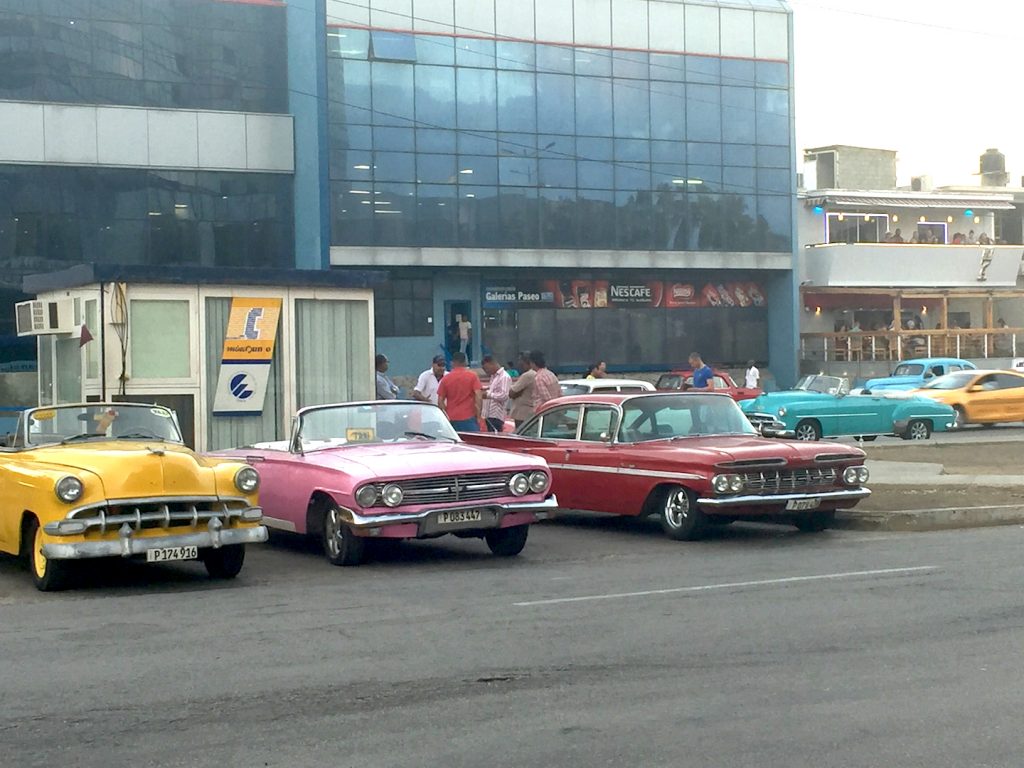 Outside the Melia Cohiba hotel in Havana, the fine old cars being used at taxis would line up and wait for a fare. It’s a beautiful sight that looks a lot like our vintage car shows, but for them it is normal.

Havana, What to Drink:

Mojitos and local beer, of course.

Havana, What to bring/leave home:

Bring the phone — texting works — but leave the computer. You just wont get much internet service so relax and go with it.

Bring an international charge card (if you have one) or plenty of cash to exchange. If you have Euro bring that. American money is not accepted and you will have to change it.

Bring your party hat, your smile and your desire to indulge in the culture. Leave your complaints home. Did  I mention how friendly the people are here? 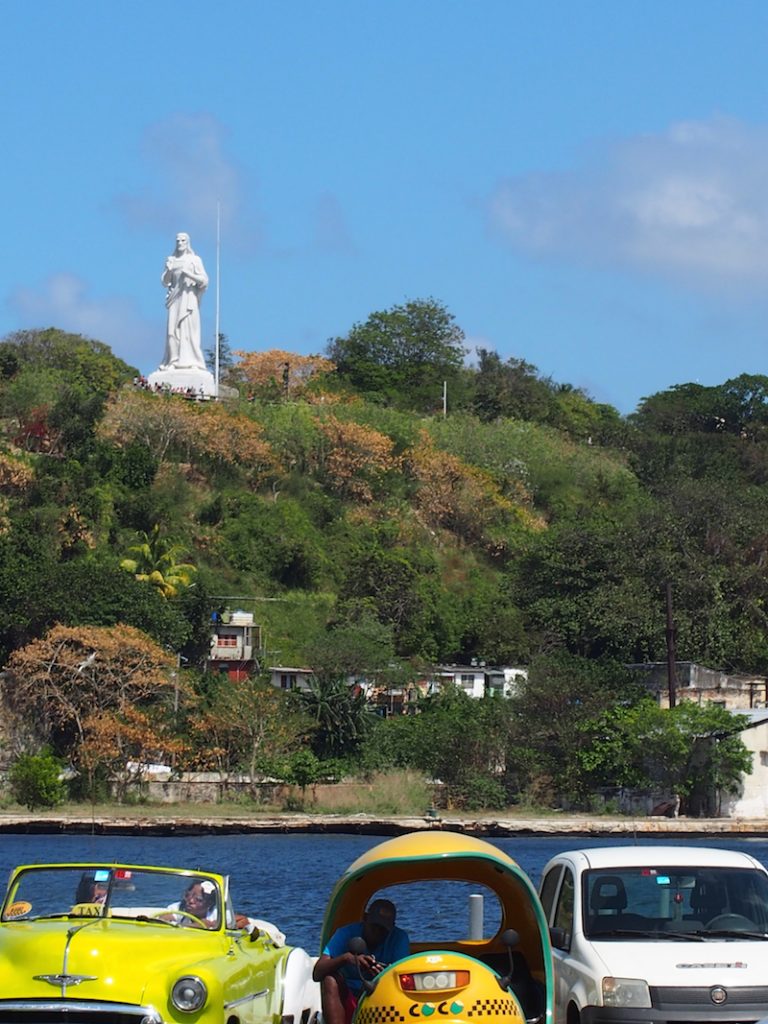 Cuba is a mix of history, architecture, culture and fine people. (Photo:R. Naas)

A Closer Look At The New Cartier Tank Francaise Watches
May 3, 2017

Introducing The Vacheron Constantin Year Of The Rabbit Watch
May 3, 2017