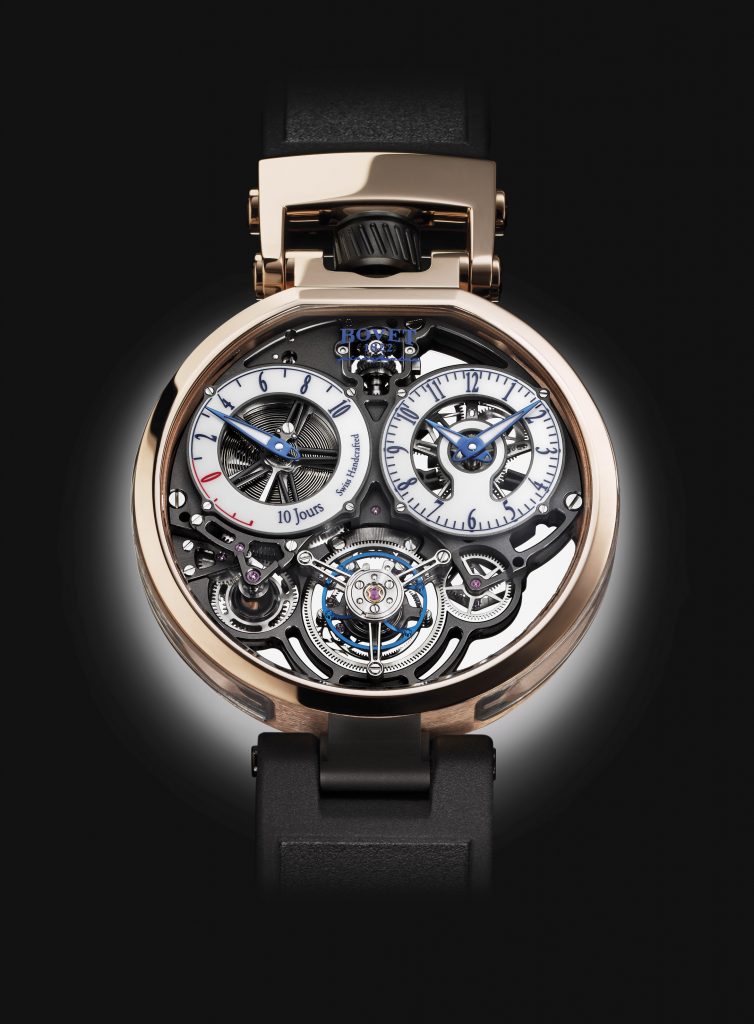 Bovet Ottantasei from the Bovet by Pininfarina collection

Unveiled to the world earlier this year, the Bovet Flying Tourbillon Ottantasei 10-Day hand-wound watch marks a significant turning point in the development of the Bovet by Pininfarina collection.  The watch displays the Pininfarina distinctive design codes and also respects the influences set forth in the first Tourbillon Ottanta® in 2010.  The word “light”, with its dual connotations of luminosity and limited weight, was the watchword for every stage in the development of this intriguing  project.

The technicians and watchmakers at the Manufacture DIMIER 1738 together with the designers at Pininfarina, unveil new technology in this movement, and bring together four large sapphire crystals for showcasing the exceptional craftsmanship. Offered in either titanium 15.54 grams) or gold (51.66 grams), the watch case evokes the look of a cockpit of the finest racing automobiles and has a superb ergonomic appeal. The balance and harmony of the dial showcase the timepiece’s complexity, from the single barrel and power reserve indicator at 10:00  to the flying tourbillon at 6:00. 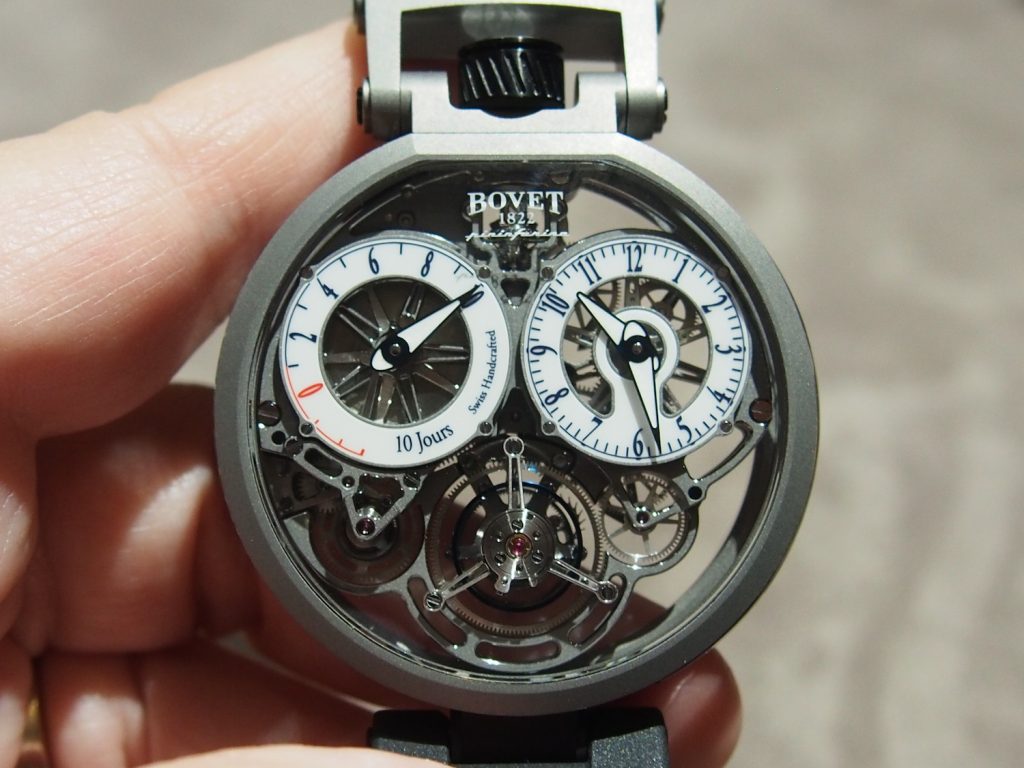 The 10-day autonomy of the Tourbillon Ottantasei should involve twice as many turns of the crown than that required by the spherical differential developed and patented by the watchmakers at DIMIER 1738. The extreme miniaturization of this mechanism has inspired them to file a second patent for the three-dimensional multiple meshing teeth, which drastically reduce clutter while optimizing the watch’s operation. The timepiece can thus be wound twice as quickly to give it the power required for 10 days of autonomy.

The plate underpinning the entire movement highlights the perfectly accomplished and delicate synergy between lightness and transparency on the one hand, and increased structural rigidity on the other. Half a day of machining and EDM is required to create a single plate. The craftsmen from the decorating workshops then require a full day to ensure the unrivalled quality finishes. Sandblasting, drawing, beading, Côtes de Genève and hand-chamfering are just some of the artisanal skills that feed into the process, and the slightest mishap can cause irreparable damage. Note that this genuine feat of three-dimensional magic involves decorating and, in particular, chamfering both sides of the plate as well as all its vertical walls. 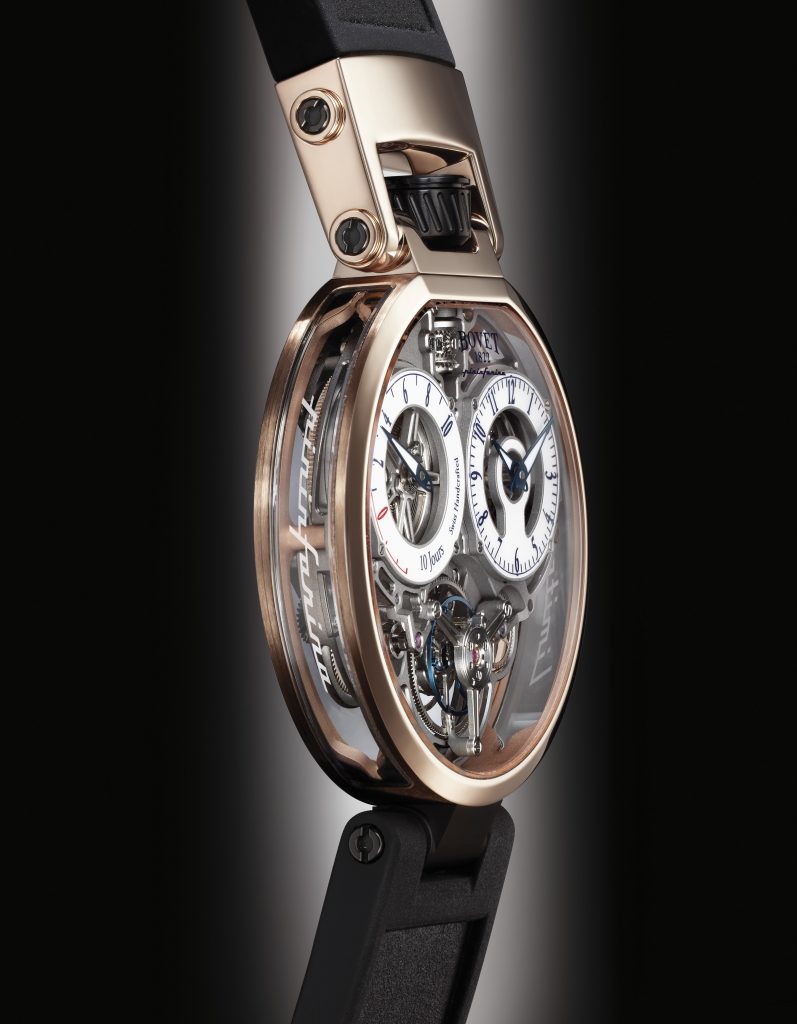 Every component is meticulously built, finished and hand assembled.

Every wheel in the gear train has been painstakingly angled and chamfered by hand, while the pivots of their axes are rolled in the traditional manner for quality and performance. The highly original flying tourbillon carriage is made up of 104 components. Its many innovations include a unique bridge at the center of its axis. In addition to its balanced masses and subsequently reduced lever effect, the tourbillon carriage seems to move more freely than ever before within its own space. This construction owes its existence to the patented double-sided tourbillon, which features the escapement and balance spring positioned on either side of the central fixation point, thus enhancing both the watch’s chronometric performances and aesthetic quality by clearly revealing the escapement and balance spring on both sides of the caliber.

Other factors that underline the Tourbillon OTTANTASEI’s lineage to the BOVET by Pininfarina family include the finishes developed and designed specifically for the collection, which magnify the alternating surfaces and volumes of the movement. There are 34 shades — ranging from black to white — used on the various strata that make up the volume of this movement. The same applies to the bipolar Clous de Paris circular décor developed exclusively for the collection’s tourbillons, which is featured here in two sumptuous plates screwed to the barrel bridge. Each rendition — titanium, black DLC titanium, or gold — is built in a limited edition of just 86 pieces. A plate bearing the individual number of each movement will be meticulously screwed to the back of the 44mm case. 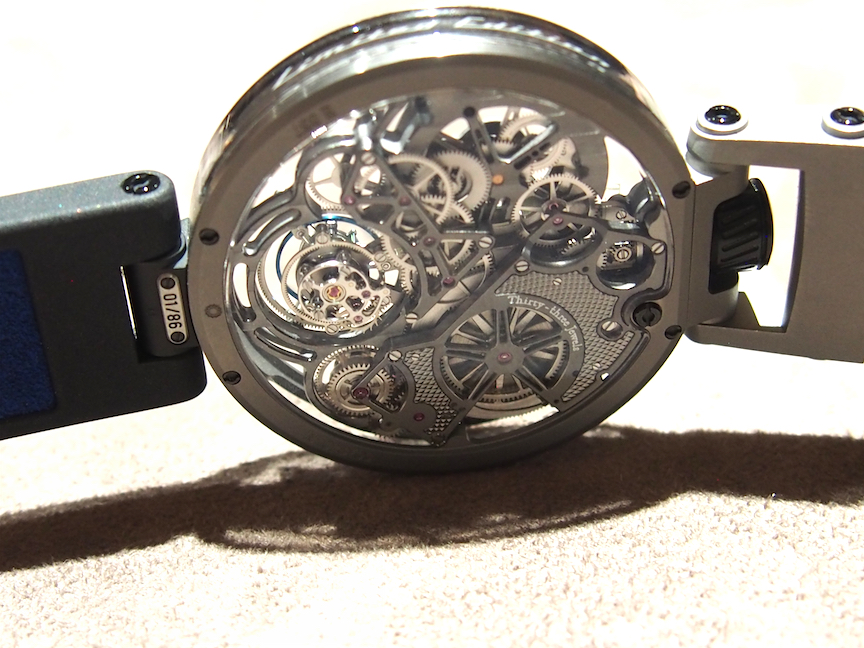 The Bovet Ottantasei Flying Tourbillon holds a patent and is created in a limited edition of 86 pieces per case metal.

I Went To The Seaglass Rose’ Experience With Corum, Here’s What Happened
December 23, 2016