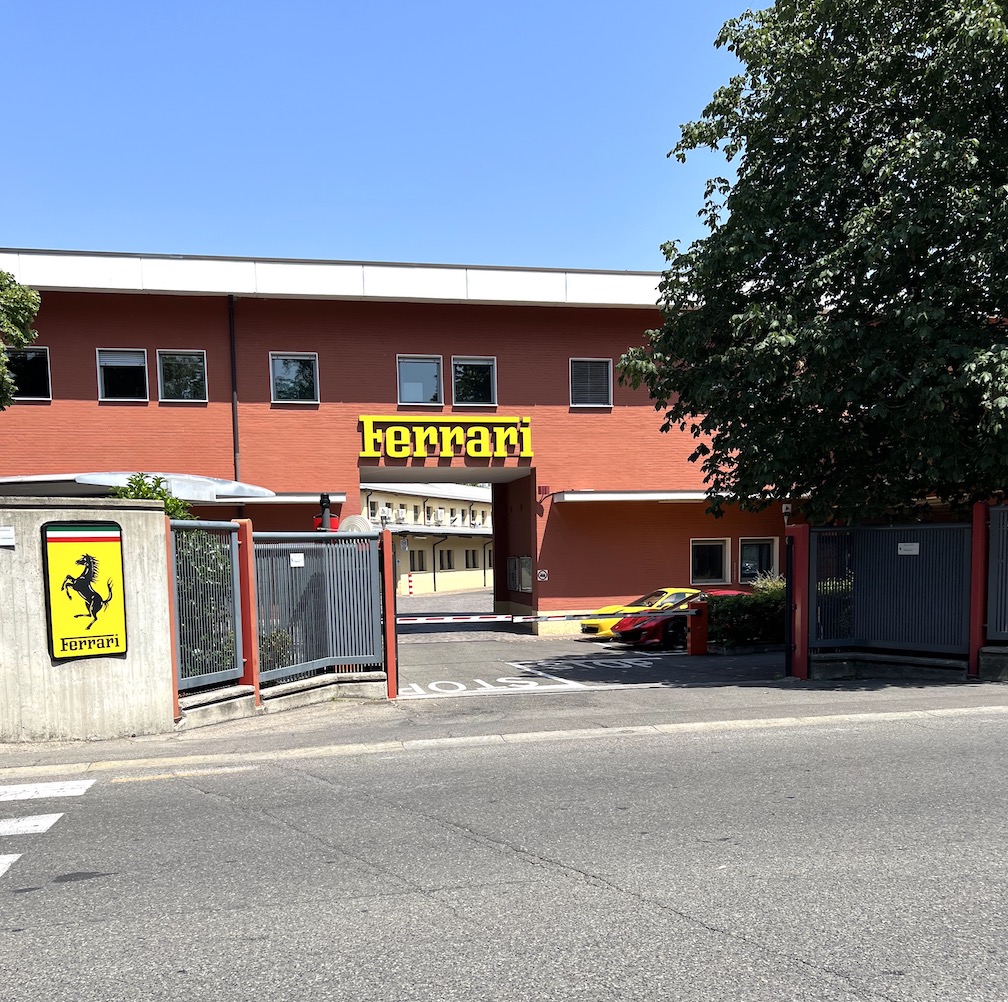 When Richard Mille first announced its partnership with Ferrari just about a year and a half ago, I knew that the first watch the duo created together was going to have to be something truly spectacular. After all, Ferrari had previously partnered with Hublot and some of those watches (like the Scuderia Anniversary piece) were fairly intriguing already. So, when Richard Mille invited me to  Maranello, Italy, to visit the Ferrari factory and to see the fruits of their efforts – I jumped at the chance. I mean, to begin with, who wouldn’t say a super-fast “yes” to the rare chance to go inside Ferrari in and of itself? 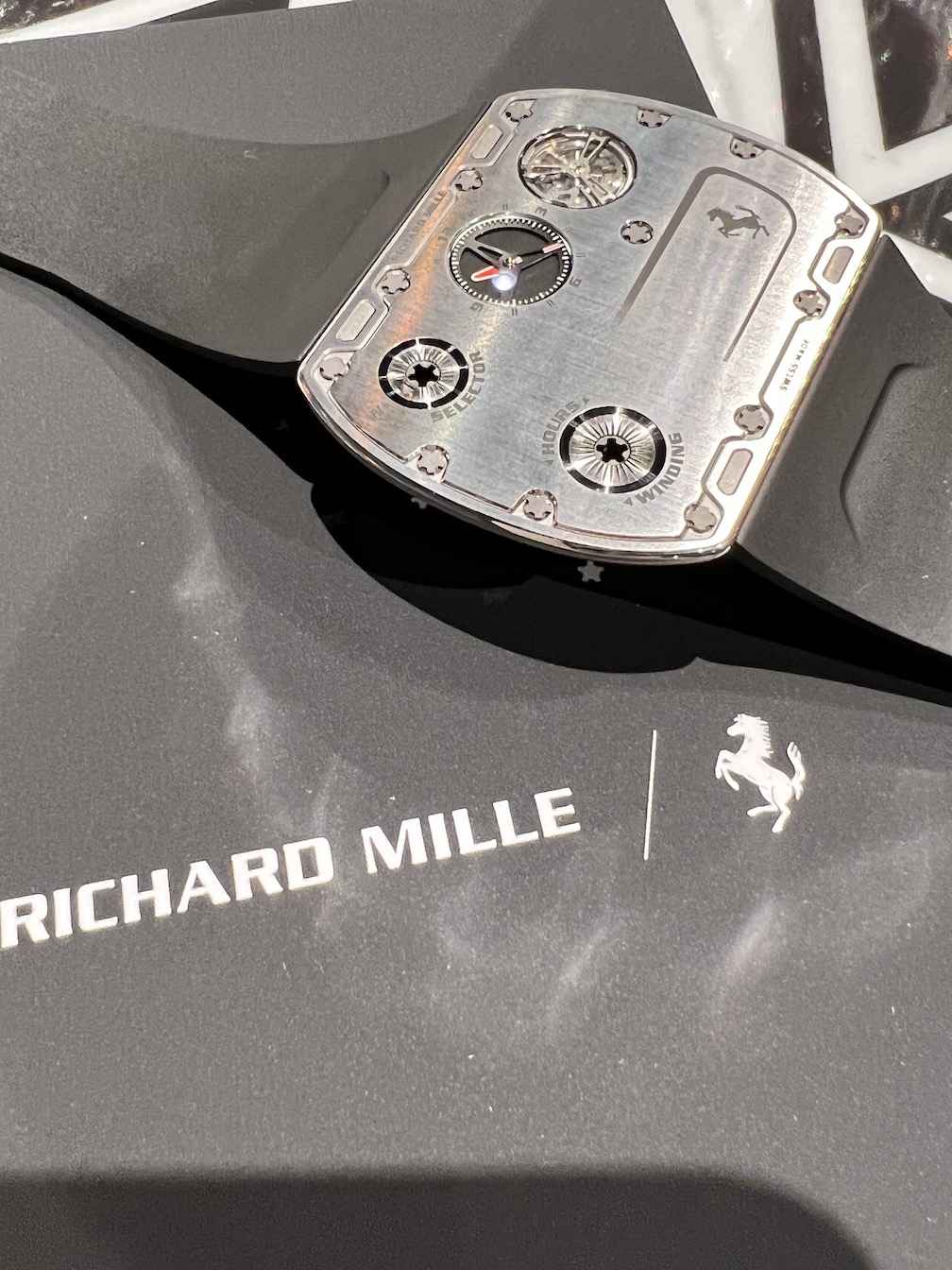 Hands on with the $1.88 million Richard MIlle RM-UP 01 watch created in collaboration with Ferrari. (Photo: R.Naas)

The thing is, I never expected to see a world record being set with the new watch. Not just any world record, but a record for the thinnest mechanical watch ever – a shocker for Richard Mille, which is known for its big, bold, in-your-face timepieces. Add to that the fact each of the 150 RM-UP 01 watches being made retails  for a mind-boggling $1.88 million. But I will come back to the watch after I give you a little insight into the town of Maranello and the Ferrari workshops. 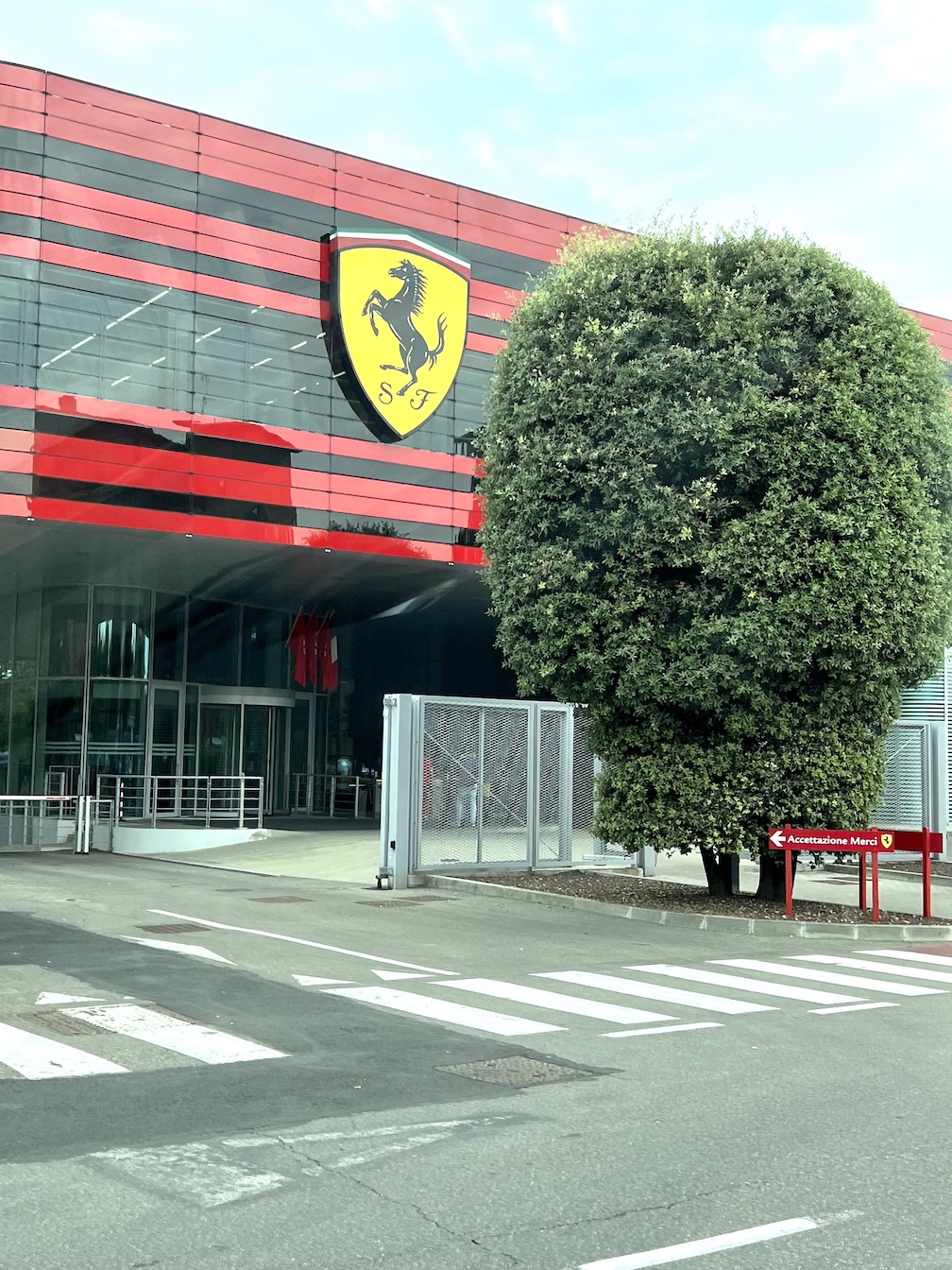 The Ferrari Museum in Maranello, Italy.

Describing Maranello isn’t easy. Yes, it is the home of Ferrari, but it is an almost Stepford-wives sort of all-too-perfect town. Maranello boasts Ferrari red buildings, Ferrari yellow accents, statues of the Cavallino (Ferrari’s famed horse logo) and even streets named after the finest F1 racecar winners. The Ferrari restaurant showcase Ferrari V8 and V12 engines on tables and corner walls backed by wallpaper that is a reverse Cavallino custom-made print. The Ferrari Museum is filled with F1 race cars and other legendary Ferraris, and the brand’s flagship store might be the most well-stocked in the world. 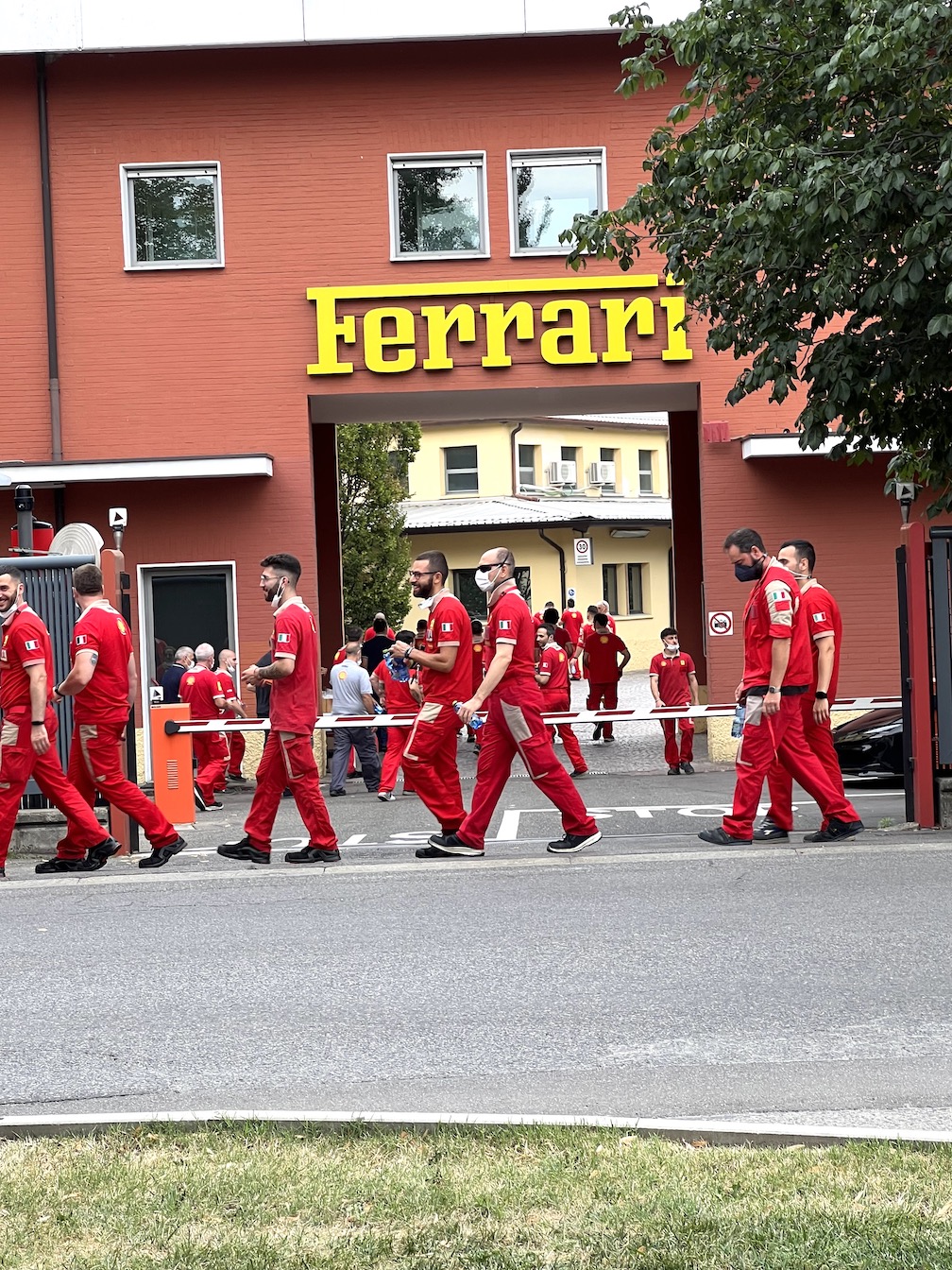 In this town, Ferrari workers walk to and from the factory in long lines at shift changes – all wearing Ferrari red jumpsuits as though going to work is a parade of celebration. It’s a scene no Ferrari lover should miss. In fact, no one should miss what one might refer to as the Disney World of Ferrari. Everything is magnificently Ferrari themed. 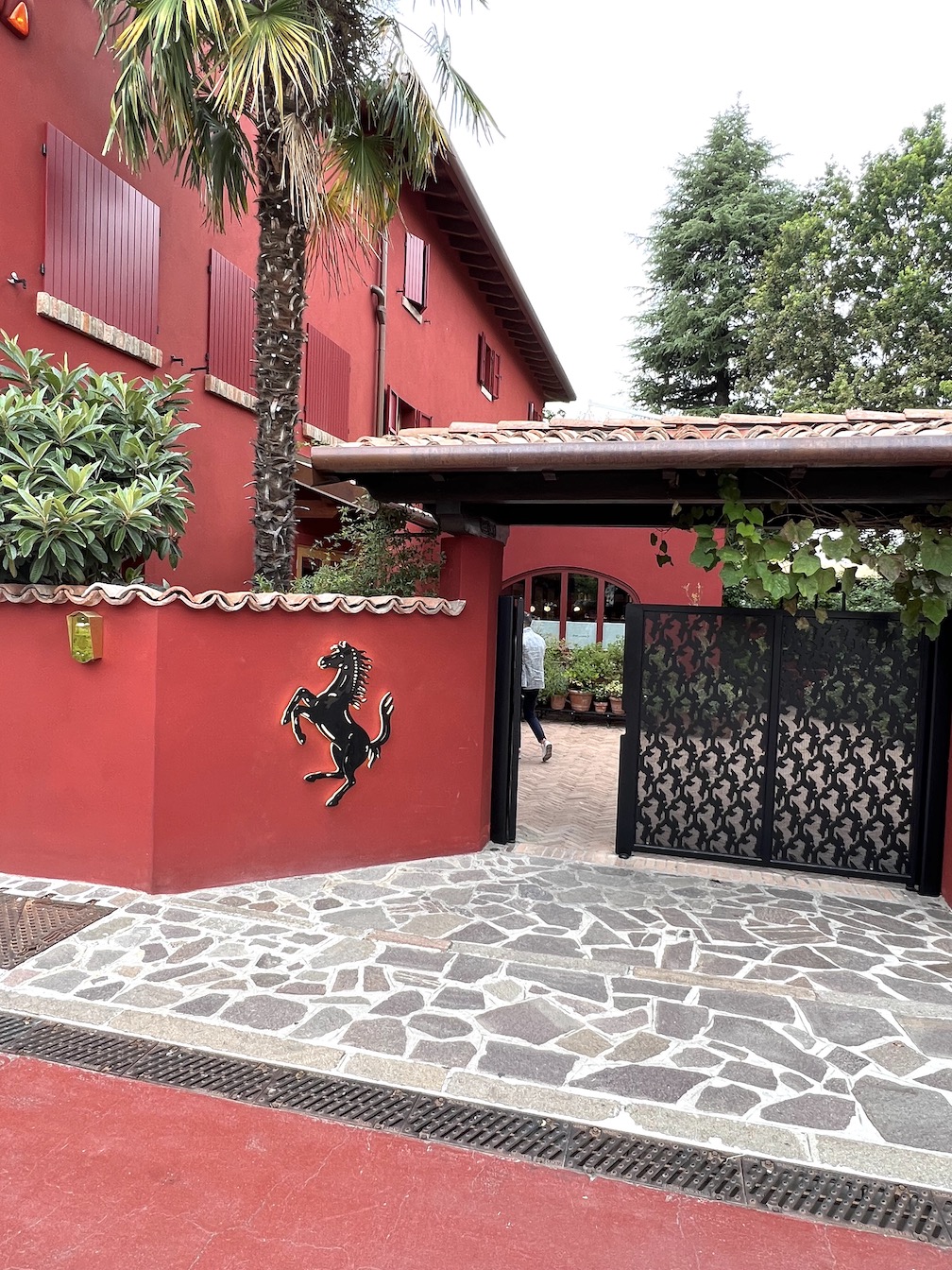 Entering the Ferrari factory and its multitude of buildings,  the hand-picked group of select journalists invited on the trip were all told “No Cameras Allowed.” No recordings, either. Everything Ferrari does is top secret. We even had to sign forms agreeing to all of their rules about disclosure. 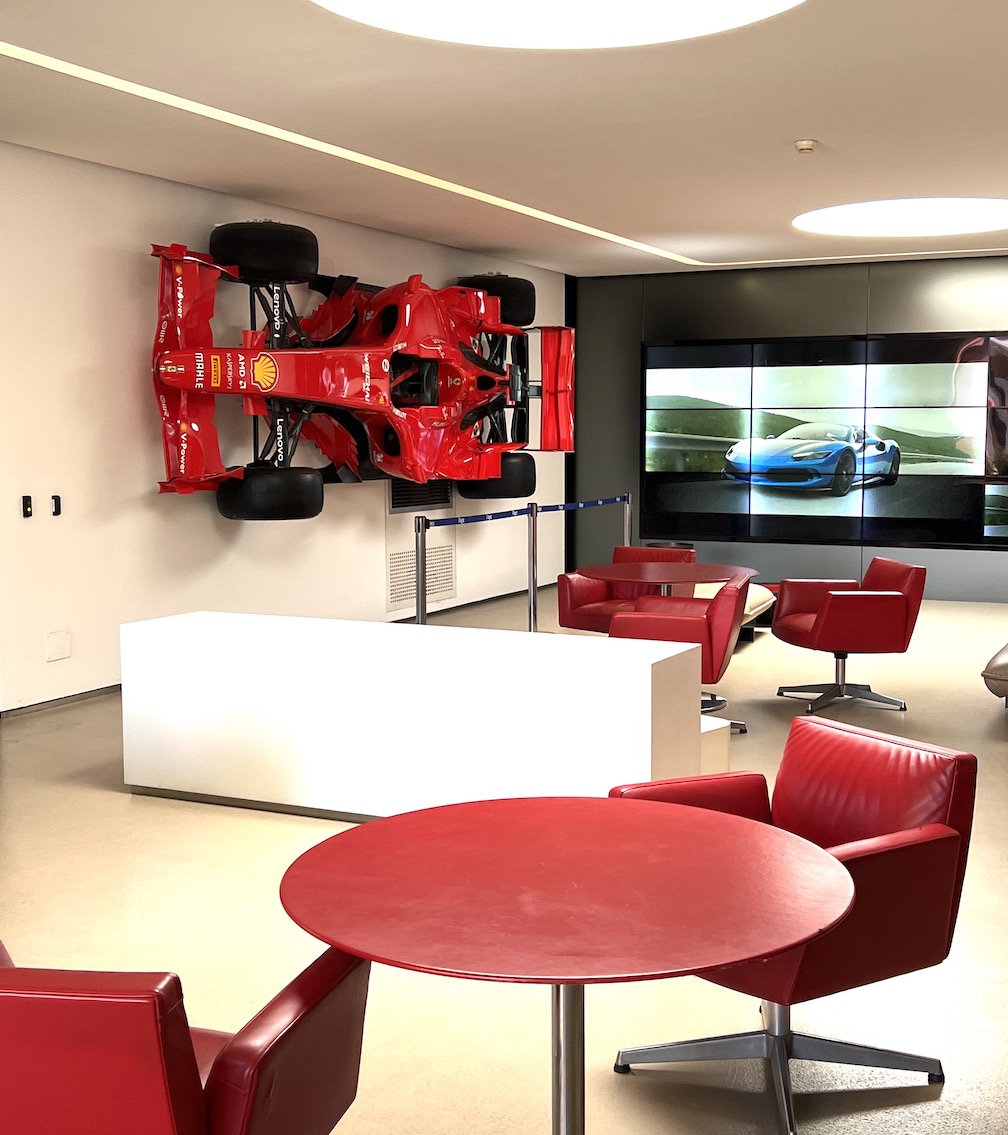 The only room you can take a picture of at Ferrari in Maranello, Italy

But stepping inside the main production workshop almost leaves you a bit speechless. Incredibly spotless, the cavernous space boasts quiet corners and an inviting garden smack in the center, where tall trees and short bushes provide a sense of the great outdoors. Finished Ferrari cars line the entrance – a reminder to the men and women who work withing the different workshops that these incredible machines are what they have a hand in making. 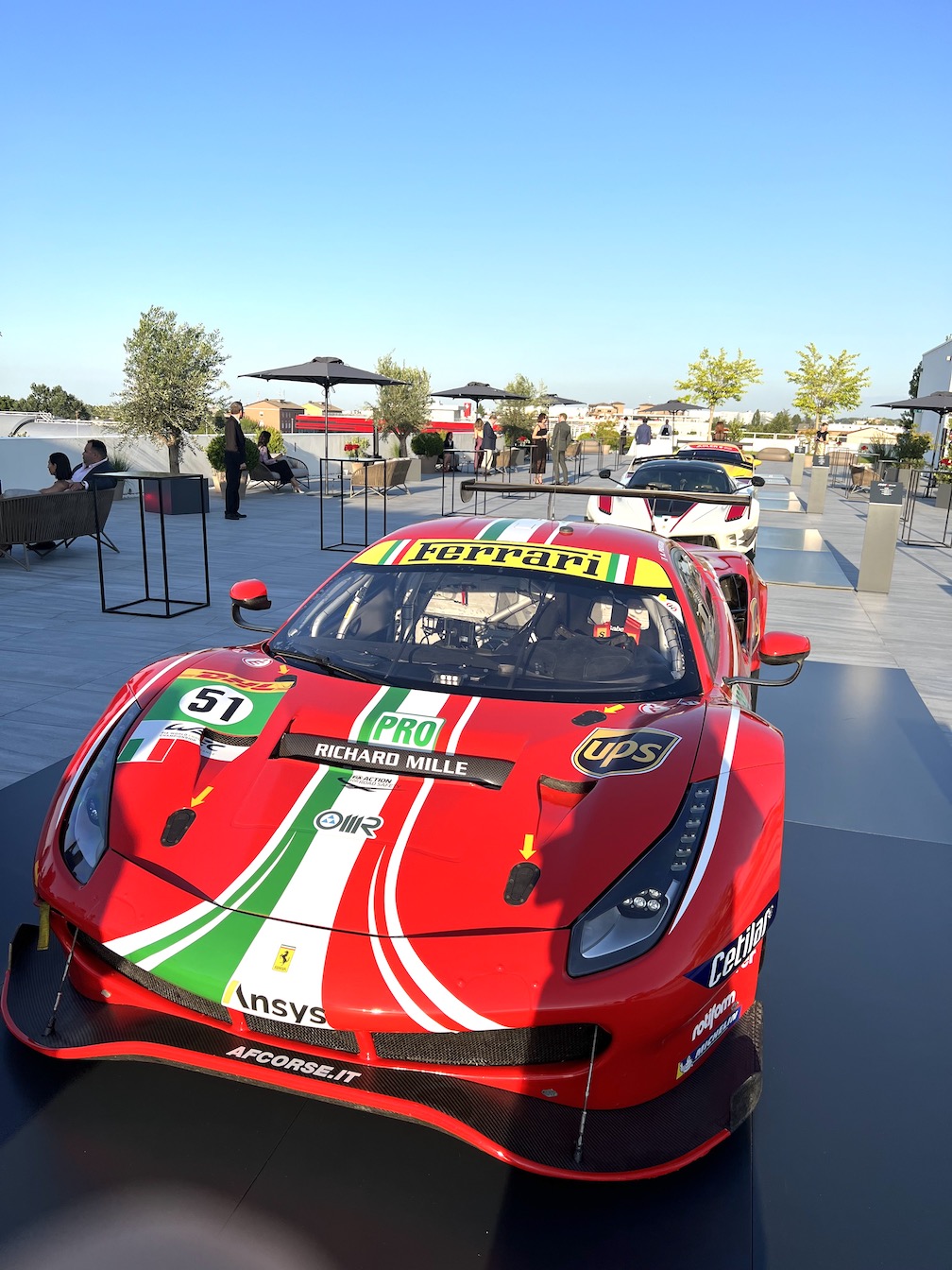 Every Ferrari is hand assembled from the tiniest parts to the finished cars – much like a Richard Mille watch. CNC machines abound and the technology that moves the chassis and engines along on conveyor belts from stop to stop – sometimes lifting them up to the ceiling to move them to another point in the workshops – is jaw dropping. It is all about perfection and precision. Again, much like a Richard Mille watch. 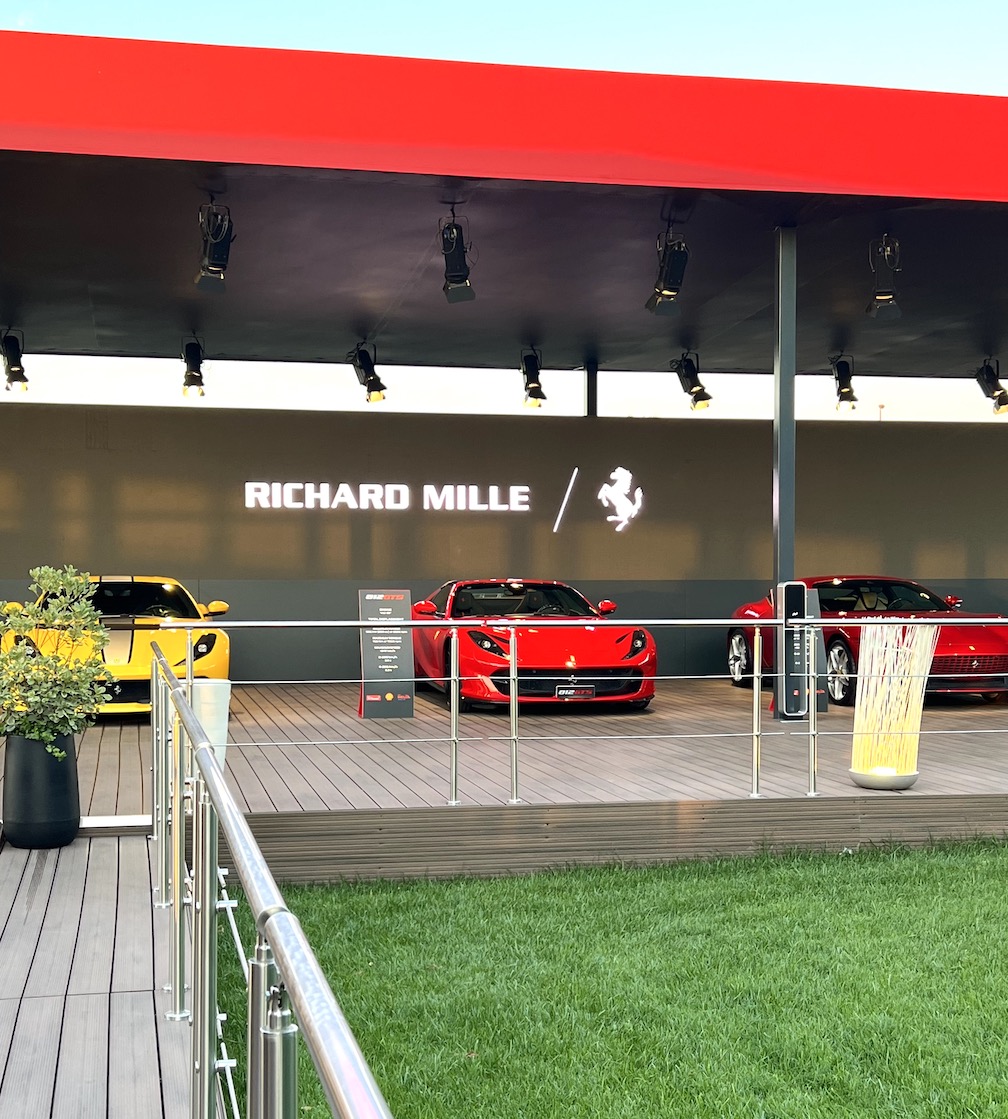 The unveiling of the Richard Mille RM-UP 01 watch with Ferrari in Maranello, Italy (Photo: R. Naas)

Oh, and speaking of Richard Mille watches, the unveiling of the RM-UP 01 (UP stands for ultra-plat, the French term for ultra-thin) to collectors (of Ferrari cars and Richard Mille watches) followed a morning press conference in a building adjacent to the Ferrari Museum. The evening event started on the rooftop of a Ferrari building that housed hundreds of cars and that is located at Ferrari’s test track, the Fiorano circuit. Even Scuderia Ferrari Formula 1 driver Carlos Sainz was in attendance. 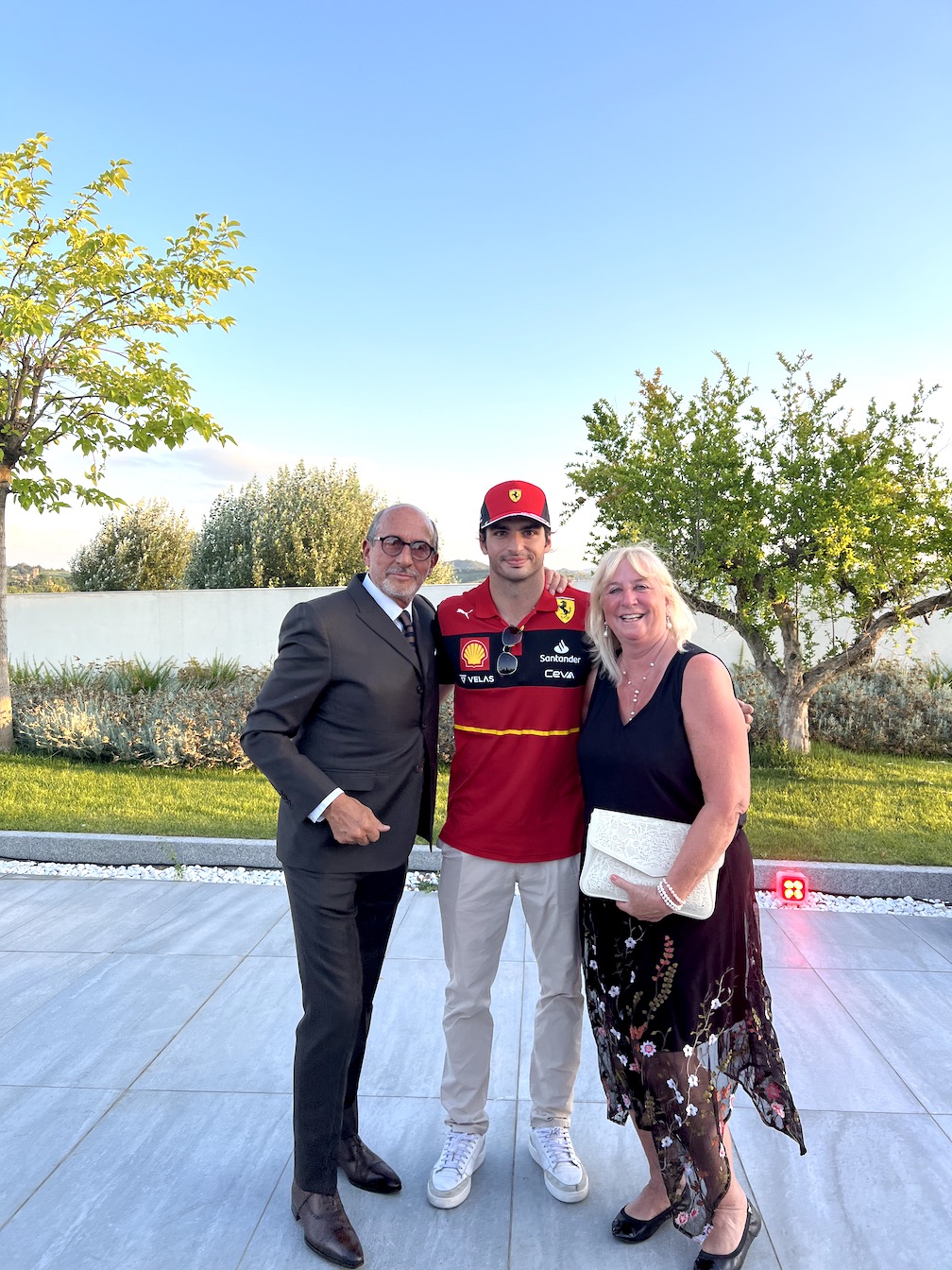 The two brands had signed a long-term partnership agreement in early 2021. Since then, the watch- and car-loving world had been holding its collective breath to see the result of the collaboration between two brands that both insist on unparalleled performance, precision, excellence and innovation. In fact, Richard Mille wooed Ferrari into the partnership by showing the like-minded rebel brand its prototype of the jaw-dropping ultra-thin watch. Or one of them. There had already been dozens of prototypes made, but once Ferrari signed on, the real work began on the revolutionary watch. 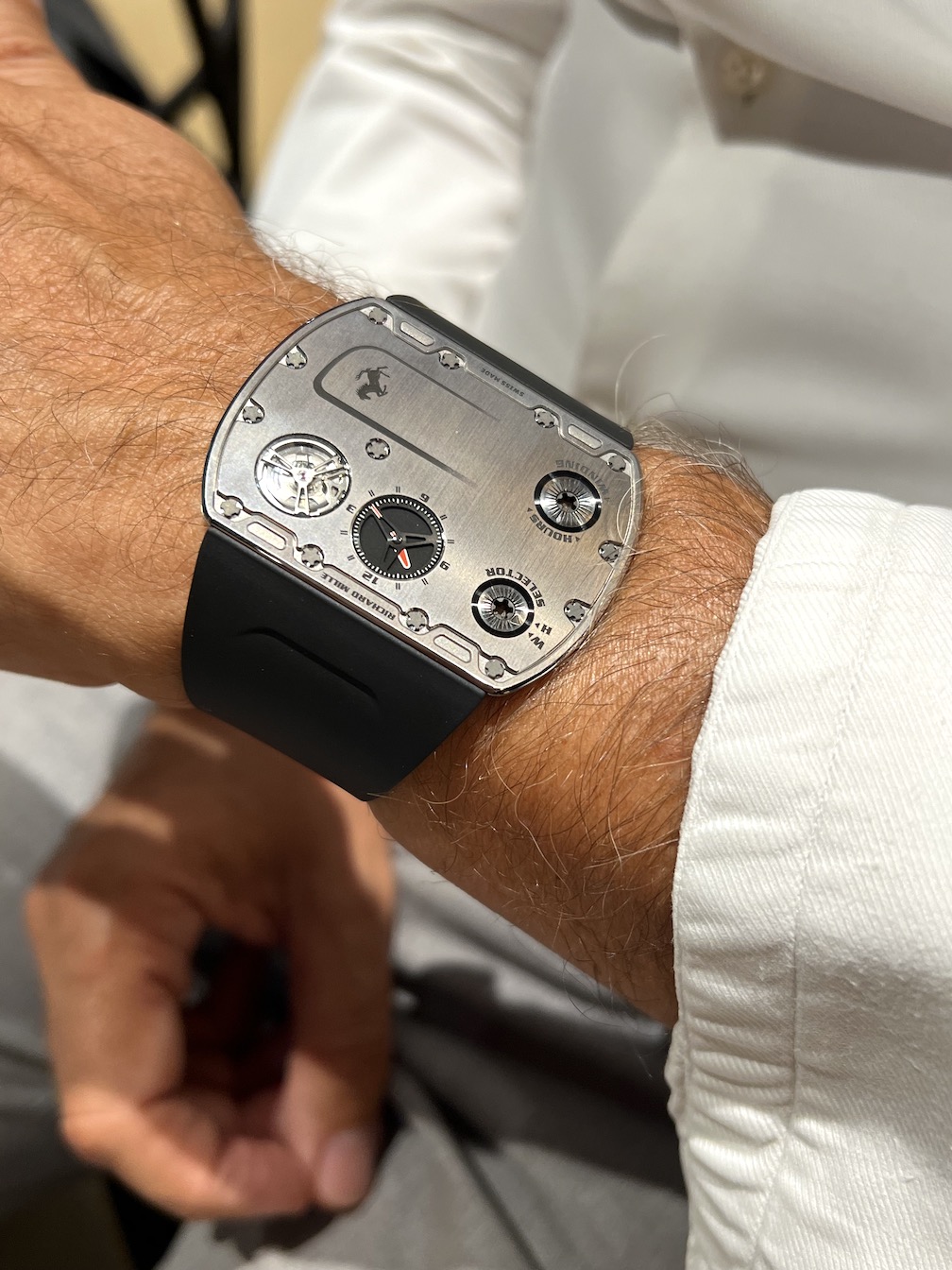 In fact, more than 6,000 hours of research and development went into the making of the watch.  Richard Mille collaborated with Audemars Piguet’s technical team in LeLocle, Switzerland, relying on its expertise in the ultra-thin watch world – a whole new realm for the Richard Mille. 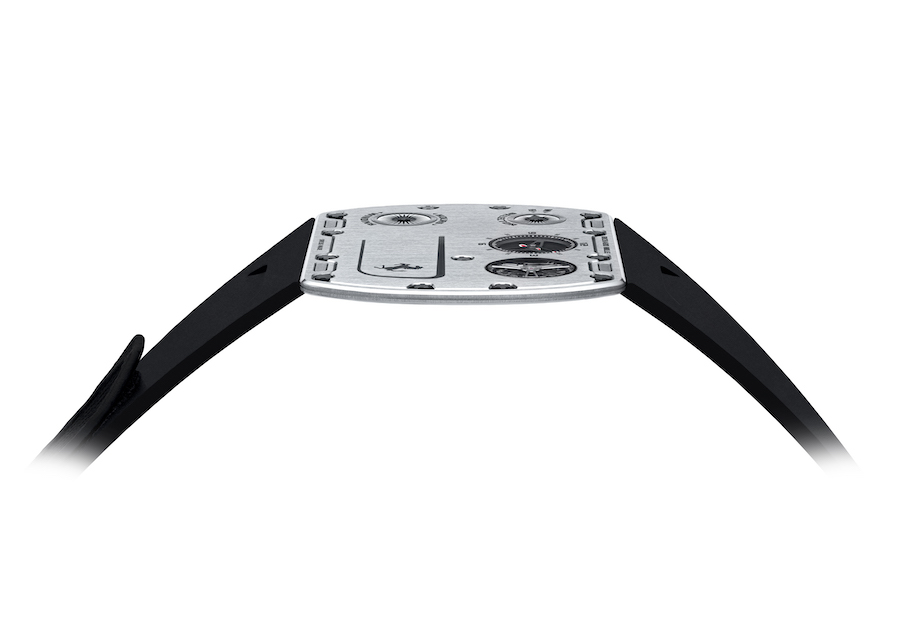 The Richard Mille RM-UP 01 Ferrari watch measures just 1.75mm in thickness (about the thickness of an American dime).

Tested in all sorts of extreme circumstances for precision, accuracy and robustness, the $1.88 million RM-UP 01 is designed to be worn every day, just like Richard Mille’s other racing machines for the wrist. 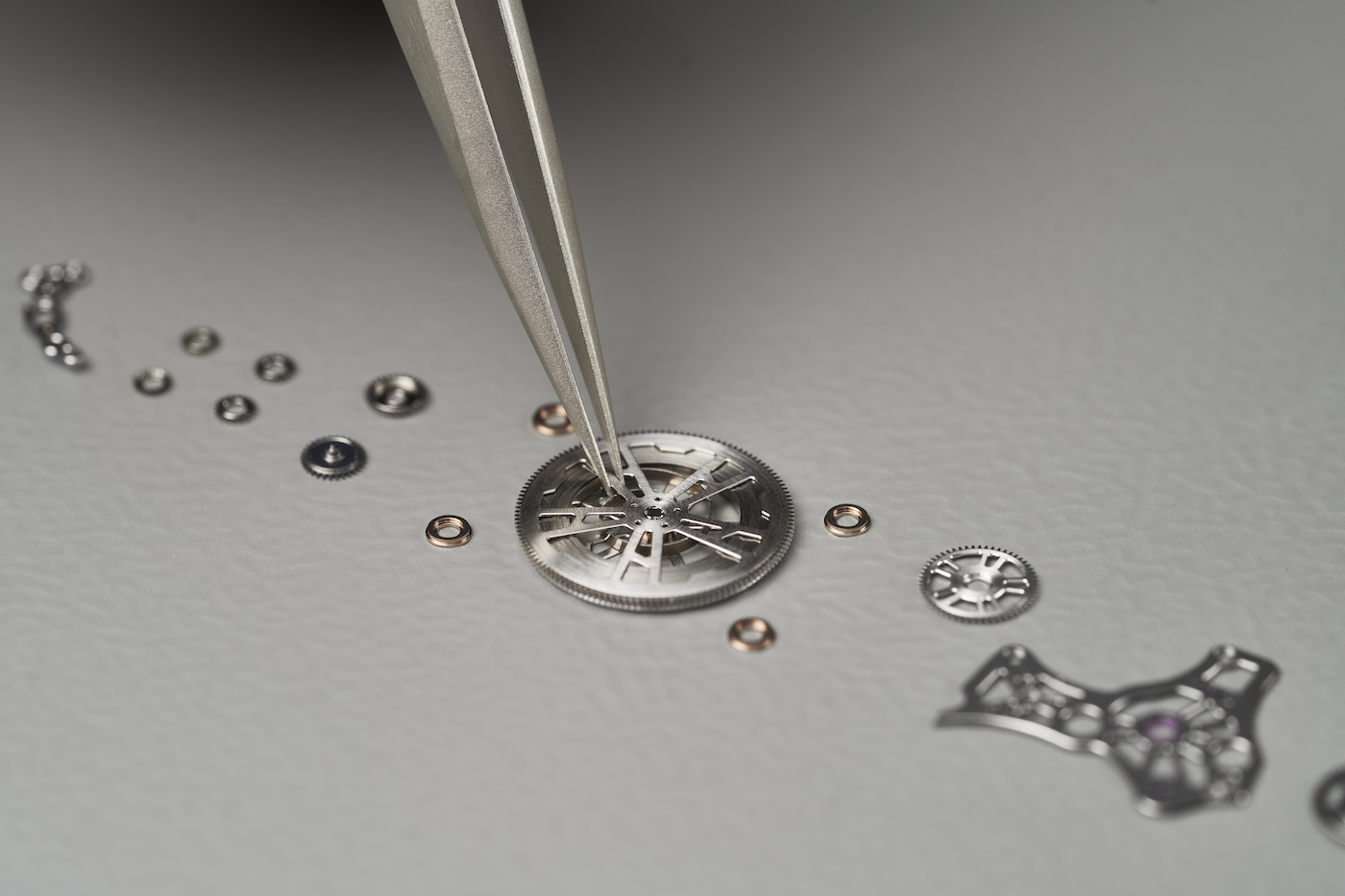 The making of the Richard Mille RM-UP 01 Ferrari watch.

Essentially, Richard Mille took its signature look – the tonneau shaped case – and flipped it onto its side as a horizontal tonneau – elongating it enough to fit an actual stand-alone movement inside. The case measures 51mm in diameter but sitting lengthwise on the wrist it fits even a slim wrist nicely, as it measures just 39mm top to bottom. The case is crafted in titanium to make it rugged yet extra light in weight. It is devoid of a crown on the case sides. In fact, the winding of the watch can be done with a tool provided with it, or even with one’s finger, as the winding and setting mechanisms are wheels directly on the case top. 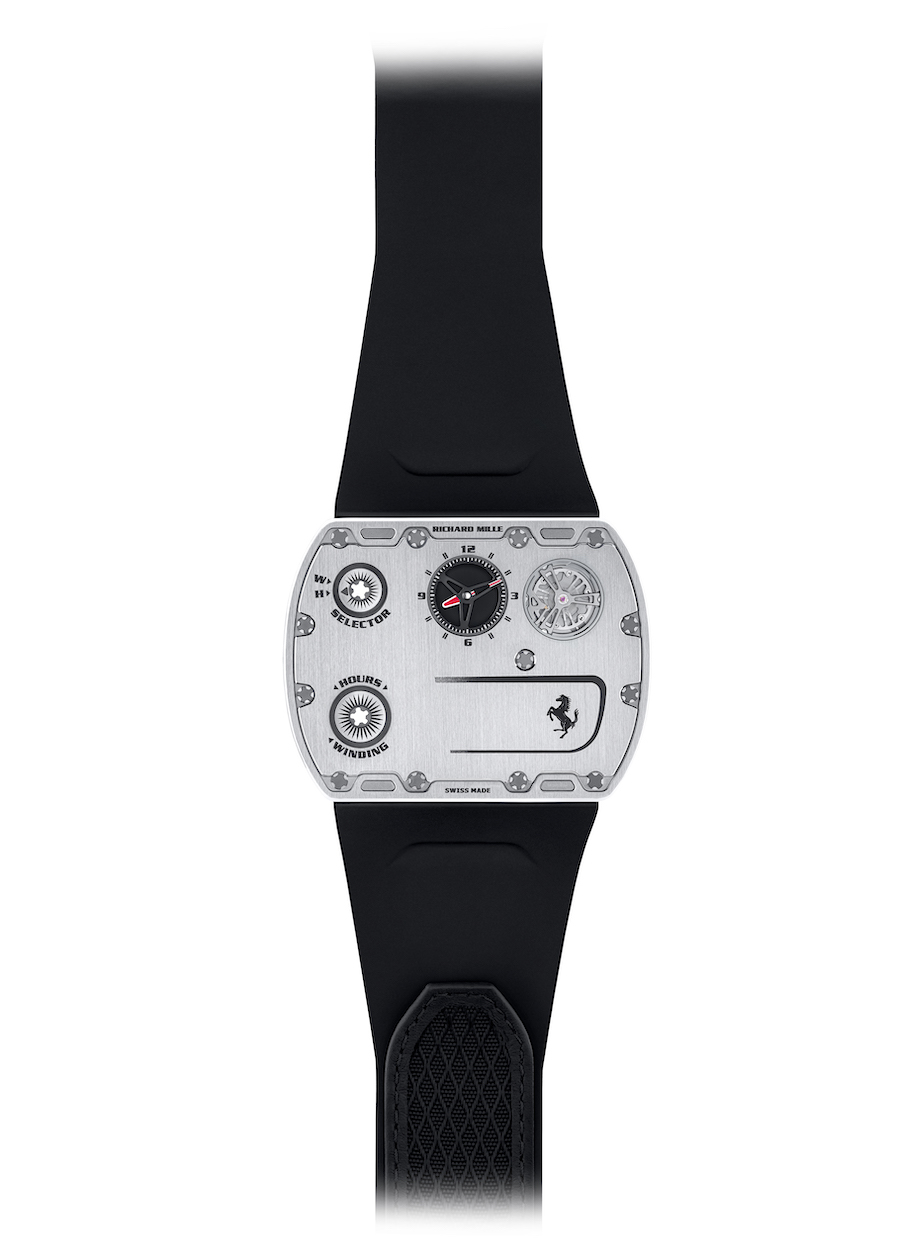 Just 150 pieces of the Richard Mille RM-UP 01 Ferrari watch will be made.

In fact, there is no real dial on the watch, as the top of the 1.75mm thin watch serves as the dial – indicating hours and minutes in a subsidiary dial covered with a tiny sapphire crystal. Another tiny sapphire crystal covers the patented ultra-flat escapement/balance wheel. Not only is this watch the thinnest mechanical watch in the world, it also houses the thinnest mechanical automatic movement, which measures just 1.18mm in thickness and is held in place using gaskets. Previous record-setting ultra-thin watches from Piaget and Bulgari did not have stand-alone movements in them. Instead, they used the case back as the mainplate. The RM-UP 01 is, in fact, a dedicated movement that is put into the watch. The only real reference to Ferrari comes in the form of a laser-engraved prancing horse on the right side of the case.  However, Ferrari also gave input as to the typeface, hand styles and numerals. 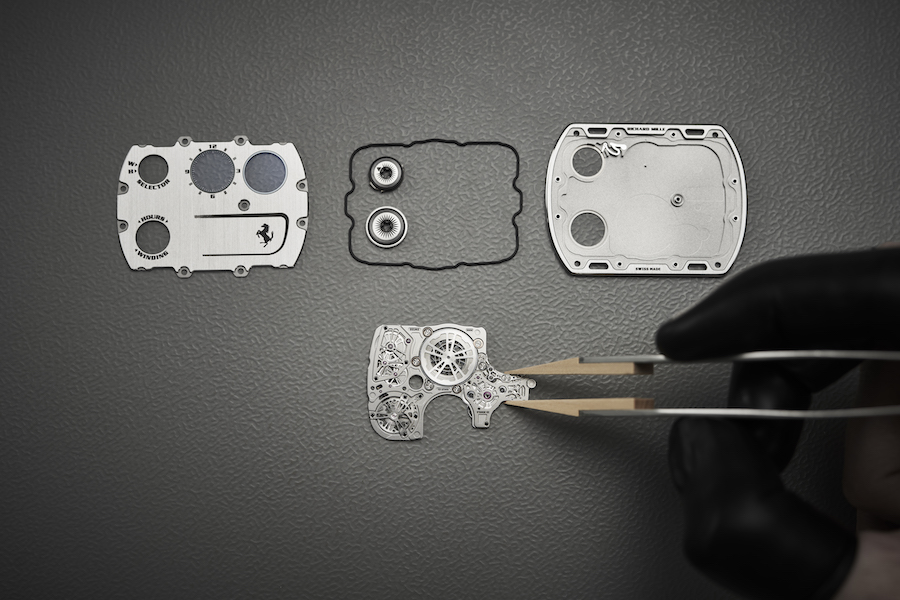 The movement of the Richard Mille RM-UP 01 Ferrari watch is the thinnest automatic movement in the world.

When the watch was unveiled at the dinner, it was met by a lot of gasps  — collectively, people were stunned. They expected a big, bold and skeletonized Richard Mille x Ferrari watch. But with such a cutting-edge design and such an incredible price, many collectors quickly warmed up to the idea of a pioneering ultra-slim collaborative watch. I spoke to a few Ferrari collectors that night who said the $1.88 million price tag wasn’t all that daunting. What a world we live in.

My opinion of the watch: I love it. It is so unexpected and has such a retro ’70’s look to it that you can’t help but appreciate it from a host of stand points. Do I like the price? Not so much, but from these two brands, you had to expect grandiose. 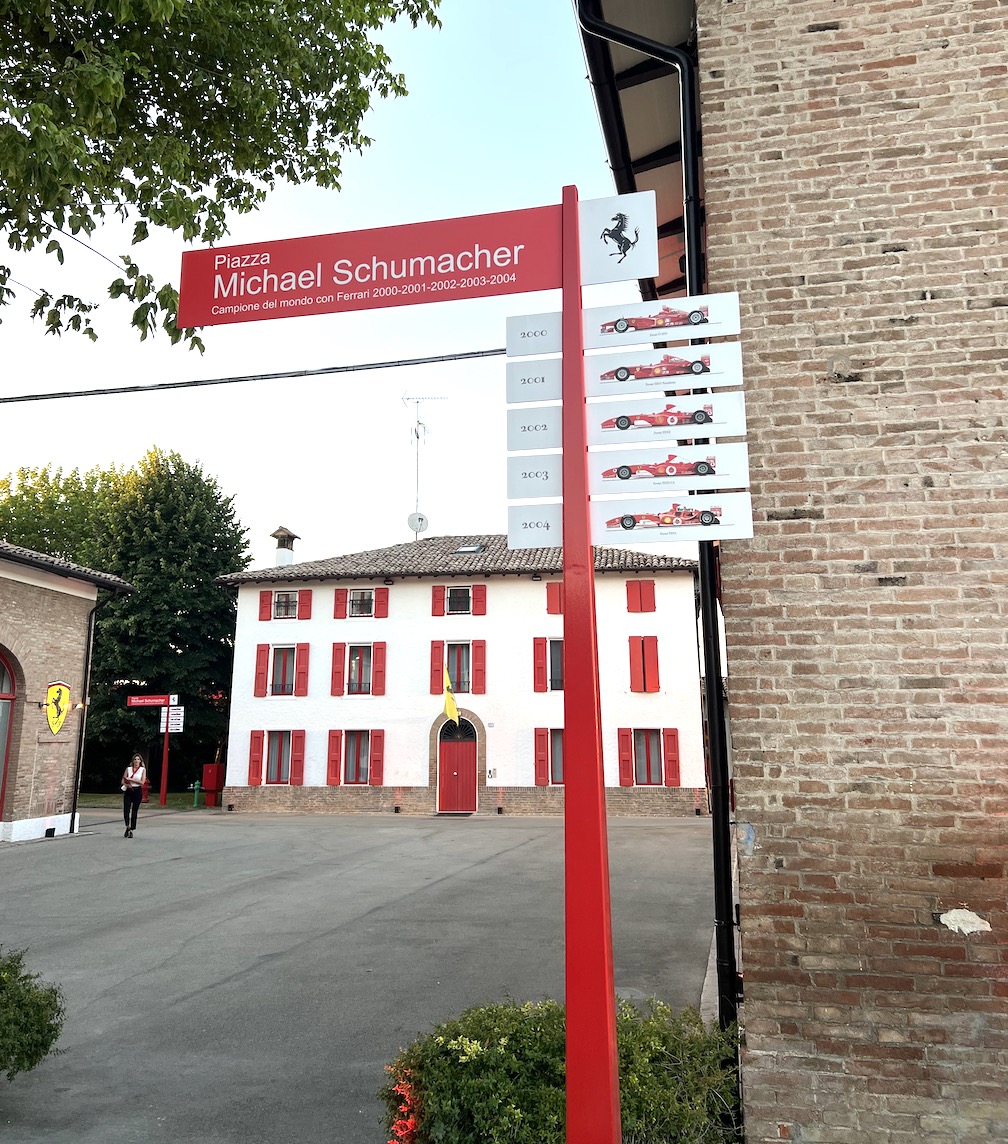