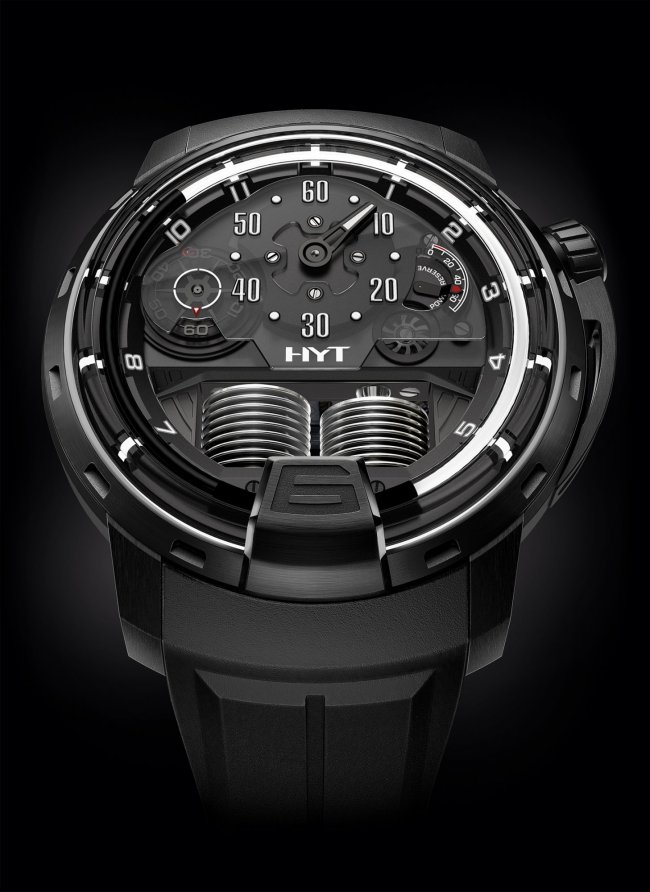 Black is the new green as HYT announces its latest release, the H1 Ghost. The new model, which is largely based on the original H1 released four years ago, uses a black liquid  as opposed to the green liquid used in the prior release. As the Ghost moniker indicates, the latest version is meant to be a sleek and more stealth version of the original H1 release. The H1 Ghost also depicts new indications.

For those unfamiliar with the brand, HYT uses a system of bellows and fluid to tell time. The liquid is moved through thin glass capillaries by bellows and air pressure. For the H1 Ghost, there is a traditional minute indicator at the 12 o’clock position, while hours are denoted by the position of the liquid as it travels along the periphery of the dial. The liquid starts at the six o’clock position and will move along the dial. In the dar, not only does the H1 Ghost display the elapsed time, but also the remaining time up to 6:00. When the fluid reaches its designated end, it performs a retrograde movement. 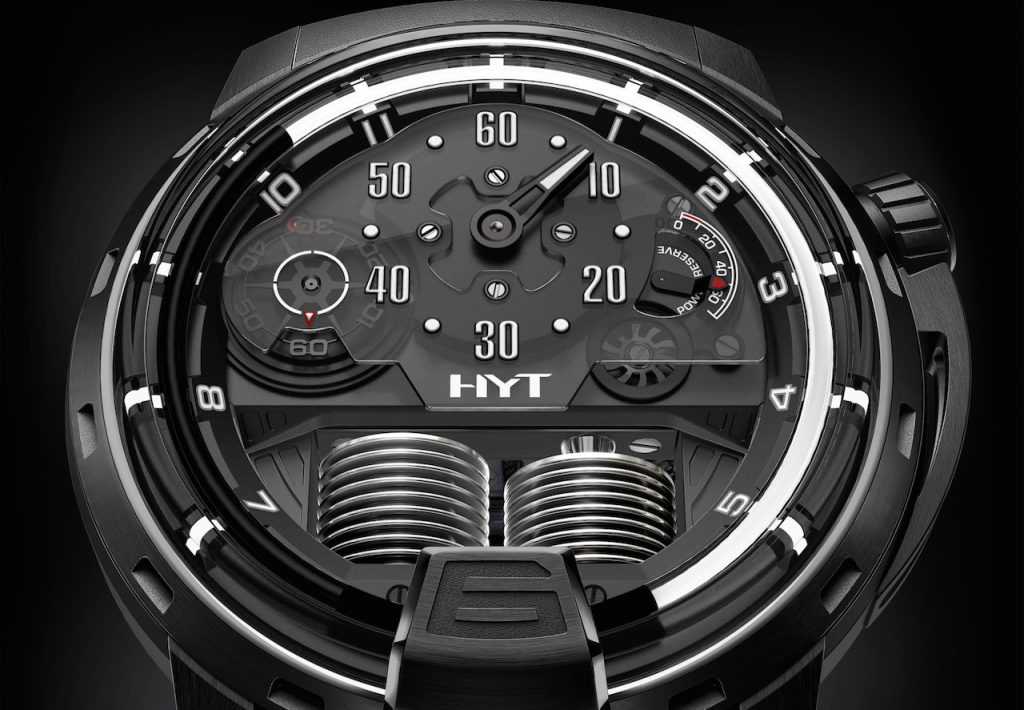 The black fluid is readable in the dark thanks to a SuerpLuminova injection and shows time elapsed as well as time remaining.

Says Vincent Perriard, CEO of HYT, “This is a display method that has roots in the modern collective unconscious. For example, when downloading something, we look at the remaining time, and not the minutes or hours that have already passed. On the H1 Ghost, the time remaining before 6 o’clock is not insignificant. Whether it is 6 o’clock in the evening or the morning, it is the time remaining until a new day… or the beginning of the night.”

Even though the liquid is the color of midnight and is designed to not reflect or transmit any light, it will still shine like the stars thanks to HYT’s placement of Super-LumiNova. HYT developed a unique use of Super-LumiNova, the material illuminates the capillary from underneath along its entire translucent stretch, beyond the black fluid. In speaking to the innovation of HYT, the black fluid took almost 12 months to create. The watch itself comes in a black DLC titanium case that presents alternating brushed, micro blasted and satin finishes. Just   50 pieces will be produced, each retailing for $62,500. 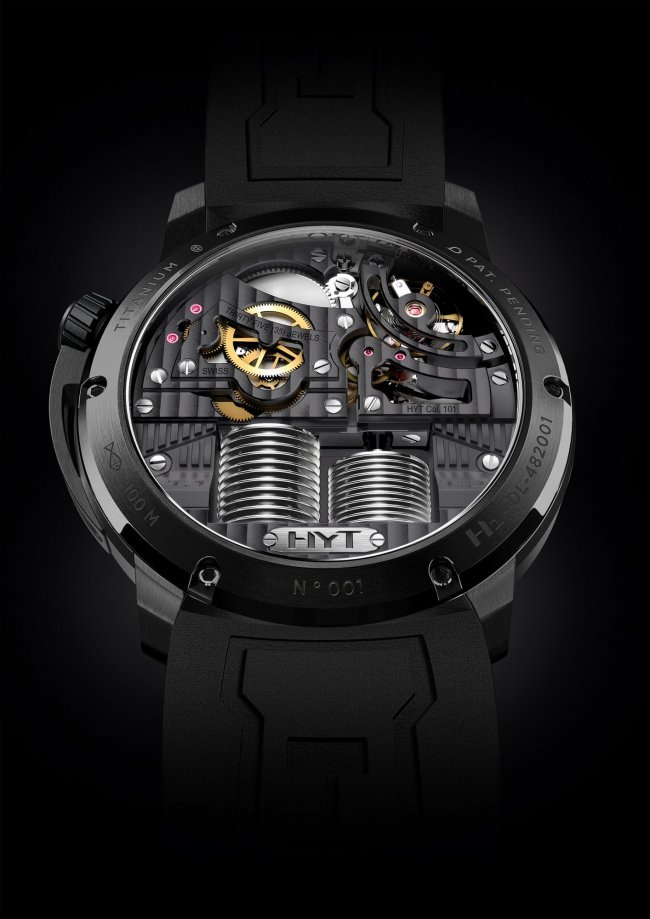 As if that aren’t enough news, there is more good stuff coming from the Swiss manufacturer. The glass capillaries that hold the liquid are in and of themselves a triumph of technology and may have broader beyond horology. HYT and sister company Preciflex announced earlier this year that they successfully raised $23 million in private financing. The influx of cash will go towards R&D of new horological innovations –the two companies already hold 29 patents –and the launch of new Swiss-made Fluid Technology that will include the development of medical devices. 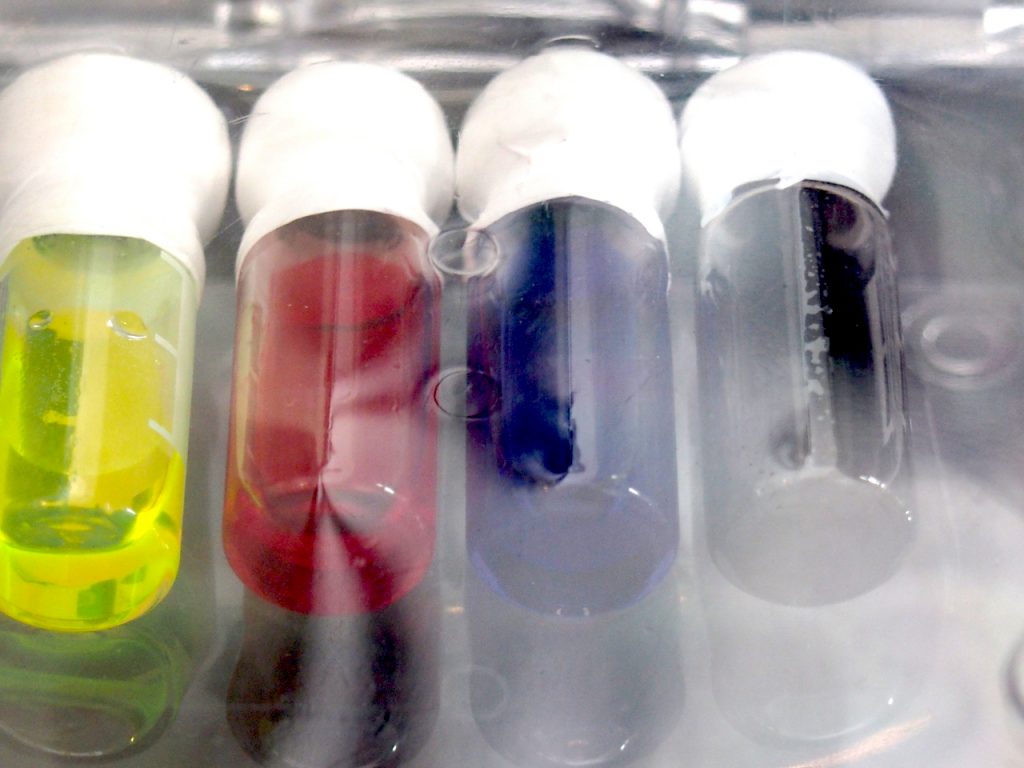