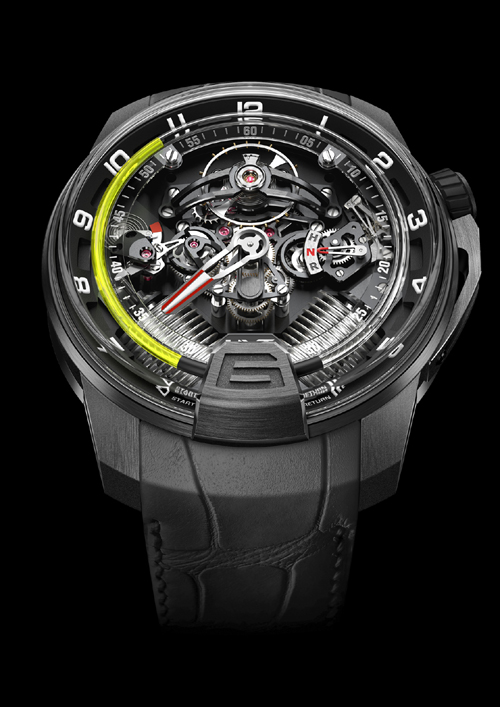 The revolutionary watch that utilizes fluid to tell time (just unveiled to the world last year) has a new generation already. Indeed, HYT, Hydro Mechanical Horologist, takes BaselWorld 2013 as its opportunity to introduce the new H2. This new second generation watch was created by HYT in cooperation with APRP — led by the renowned watchmaker Giulio Papi. The H2 further pushes the concept of hydro mechanics. The first sketches of this new H2 watch date back a year – to when the concept was taking firm root.

“The technology of the fluid is the same, but the engine behind it now comes from the master watchmaker, Giulio Papi,” says Vincent Perriard, CEO of HYT. 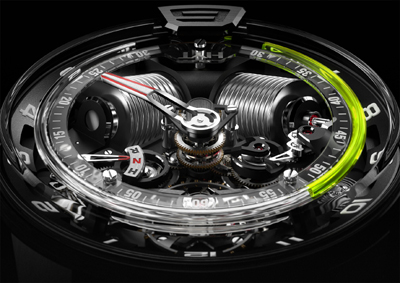 Essentially the watch – of which just 50 pieces will be made — offers retrograde fluidic hours, and minute’s indication via a jumping hand functioning at 30 minutes. The mechanical manual-wind exclusive HYT caliber beats at 21,600 vibrations per hour. The hybrid movement of H2 is redesigned, with important hydro mechanical parts being repositioned to optimize the integration of the interface that connects the watch mechanisms with the fluid system. The watch also boasts a hand that is a temperature indicator – enabling the user to determine when the fluid is at optimum temperature range. The design also offers a high-tech automotive appeal

The H2 boasts a 48mm black DLC titanium case and a domed sapphire crystal to accentuate the three-dimensional depth.  The watch is built with a double barrel to offer eight days of power reserve. The barrel spring is visible and the power reserve is displayed in an innovative manner via the open-worked barrels. The driving force behind this watch: two flexible reservoirs, with a capillary or vein at each end, containing two different liquids. In one is an aqueous liquid containing the florescent fluourscein. In the other, a viscous transparent liquid resides. The two bellows are moved by a piston. When the first is compressed, the other is extended, driving the movement of the fluids in the capillary. The meniscus marks the separation between the two tubes and displays the time. When it reaches 6:00 pm, the fluorescent material returns to the original positions thanks to a retrograde movement. The entire complex watch demonstrates a fusion of liquid mechanics.