Hermes Slim d’Hermes L’Heure Impatiente, created by Agenhor and Hermes, is lovingly referred to as the Impatient Hour watch

Have something important you have to do? Some place exciting you have to be? Hermes has developed a watch that counts down the minutes in the hour before that set time — chiming a tone at the exact minute of the Rendezvous. The Slim d’Hermes L’Heure Impatiente watch, lovingly referred to as the Impatient Hour watch, is the result of a collaboration (once again) between Hermes and  watchmaking great Jean-Marc Wiederrecht, and is the sequel to Hermes’ much-loved Time Suspended (Le Temps Suspendu) watch that allowed the wearer to stop time with the push of a button.

Essentially, the watch is an alarm watch, but it operates differently from most in that  the alarm not only sounds at the pre-set time, but the watch also offers a minute-by-minute count down to that even.  Even better is the fact that it is simple to use. The wearer sets the event time on a small subdial on the lower right portion of the dial.  The mechanical watch recognizes the set time and engages the countdown function automatically 60 minutes prior. As mentioned, when the exact moment hits, a chime sounds.

The subdial at 5:00 is where the time is set, and the subdial to its left at 6:00 offers the countdown on the Hermes Impatient Hour watch.

What’s Under the Hood of the Hermes Impatient Hour Watch

Wiederrecht and his team at Agenhor took great fun in creating the module that enables this function. The module sits atop an Hermes ultra-thin caliber that is produced exclusively for the brand by Vaucher (of which Hermes is a part owner). To add that touch of whimsy — which is typical of Hermes —  Wiederrecht has built the tooth of the cam (which rotates twice a day) in the form of a shark, who’s fin activates the  rack that activates the hours. Wiederrecht has built that rack in the likeness of the winged horse, Pegasus.

The Slim d’Hermès L’Heure Impatiente watch was five years in the making. In order to achieve optimal sound for the alarm function, it was determined that the dial should have no contact with the case at all — enabling the sound to come through the perimeter of the watch. This is just one aspect of the challenges inherent in creating the Impatient Hour.  There is a  helical spring that stores the energy for the striking mechanism. The use of a helical spring in watchmaking is not common, but it was chose because of the constant torque transfer that it offers. It receives its power from the Pegasus rack, and with that energy it moves the 60-minute countdown hand, and also makes the watch chime. 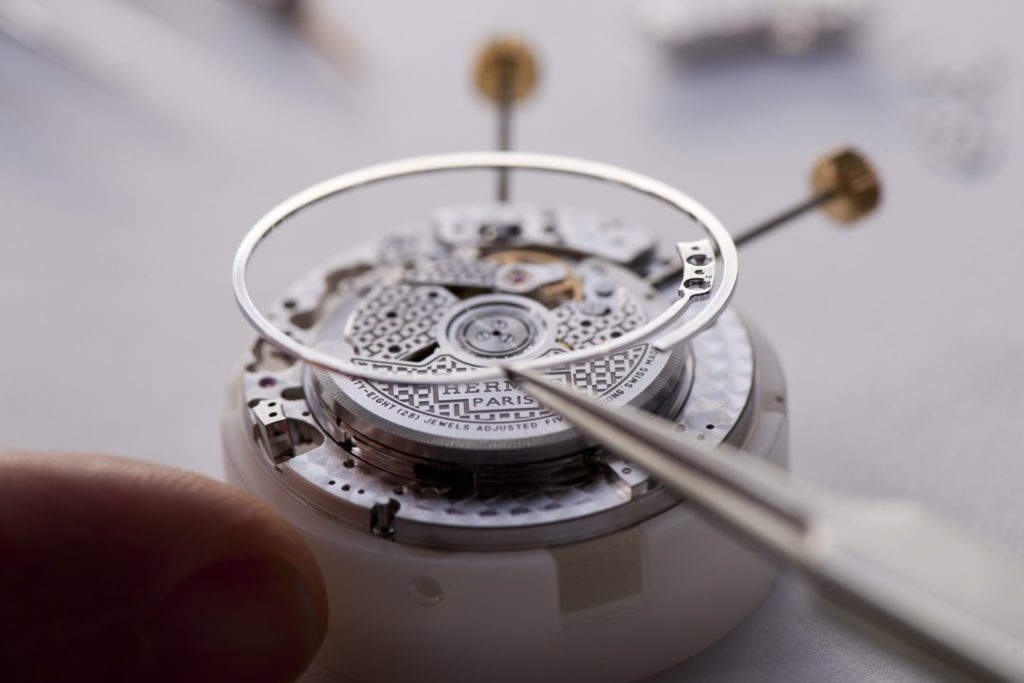 The Hermes Impatient Hour watch is built so that the dial does not touch the case sides, enabling the gong to chime with better acoustic output.

Also in keeping with the winning design codes of the Slim d’Hermès line, this timepiece comes with a dial featuring printed Arabic numerals designed specifically for Hermès by the award-winning French graphic designer Philippe Apeloig.

The Slim d’Hermès L’Heure Impatiente is available in 18-karat rose gold with a dial featuring Aarbic numerals designed for Hermes by Philippe Apeloig, Franch graphic designer. It is finished with a hand-stitched blue alligator strap, and retails for $39,900. 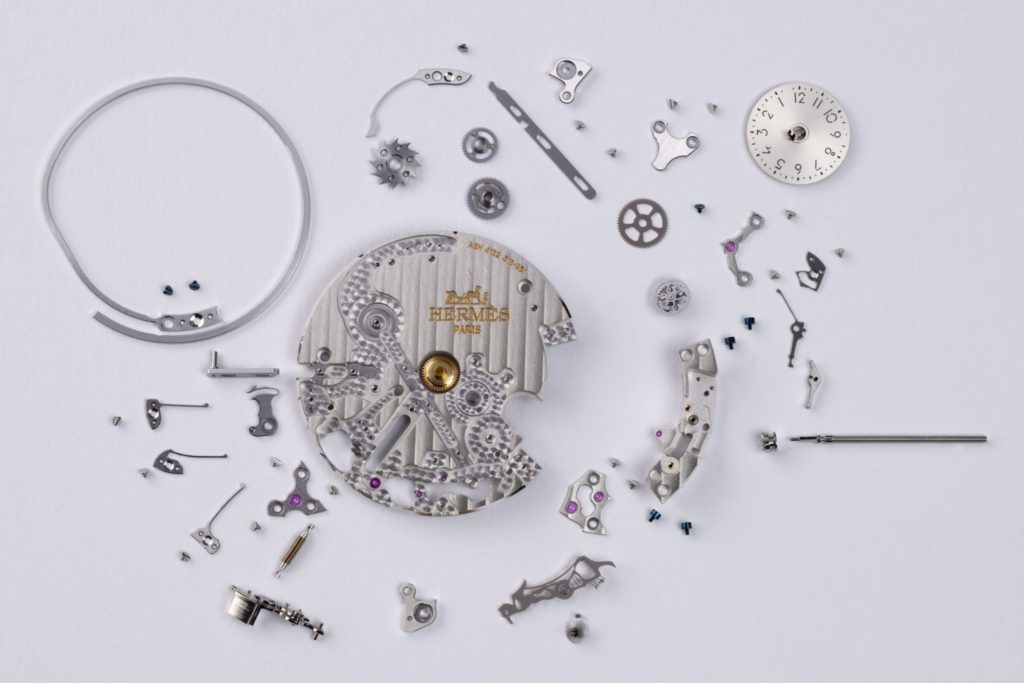 The module for the Hermes Impatient Hour watch was built by Jean-Marc Wiederrecht and his team at Agenhor and measures just 2.2mm thin. (Photo: Eveline Perroud)