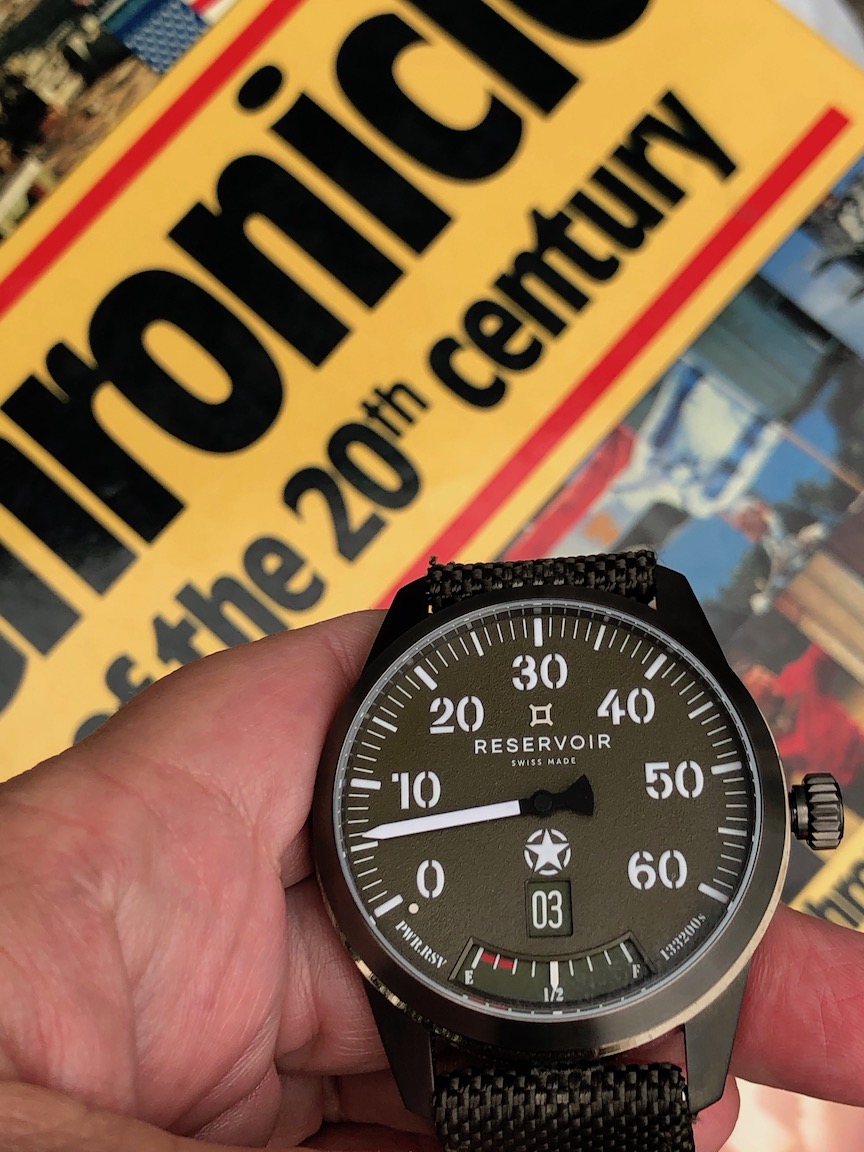 There are several different stories going on in this article, that include a tribute to D-Day (this Saturday, June 6, 2020) and to the heroes who fought for our freedom, as well as a watch review of the Reservoir Battlefield D-Day watch, and a little more. Reservoir is a Swiss brand located in La Chaux-de-Fonds and specializing in creating affordable, top-quality features-and-functions-oriented watches. Most reflect gauges of yesteryear — reimagined on the dials. Whether they are gauges from diver’s equipment, automobile dashboards, or others, the watches are a deft blend of precision and sporty style. Such is the case with the new Battlefield D-Day watch. 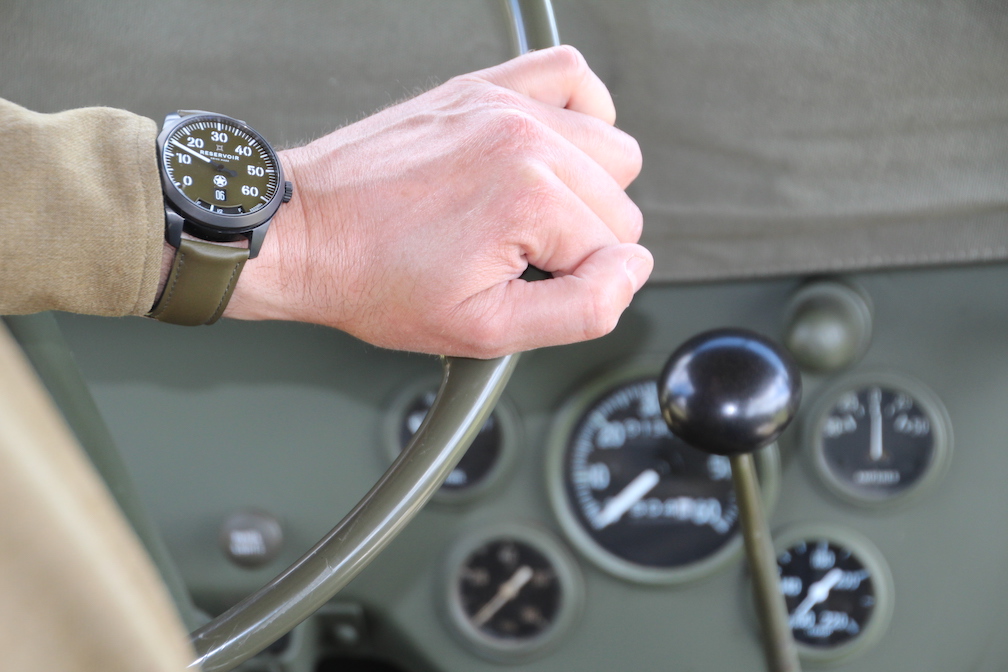 Reservoir Battlefield D-Day watch pays homage to one of the most important and decisive battles in history.

Recently, I went hands-on with the watch and I was really impressed by it — and sad to have to give it back.  First, the story behind it. This year D-Day celebrates the 76th anniversary of the 6:30 am landing of the US Army in Normandy. The landing marked one of the greatest battles of World War II, and a turning point. The mission was code-named “Overlord,” and more than 20,000 warships were launched from Omaha Beach and landed in Normandy, along with hundreds of soldiers and the iconic Battlefield D-Day all-terrain vehicle —  one of the decisive weapons used by the USA in the war. 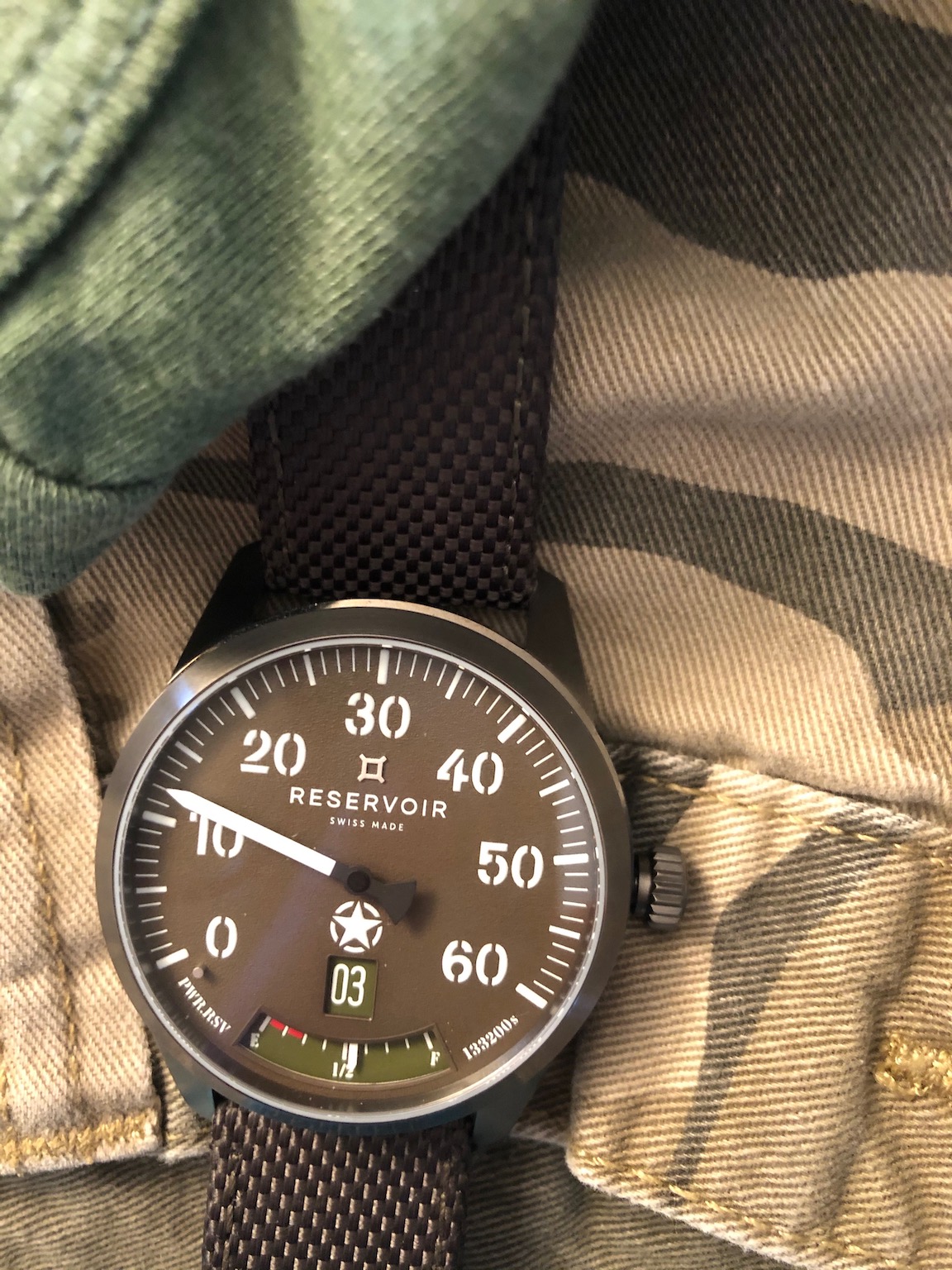 The Reservoir Battlefield D-Day watch has a sand-khaki dial that actually seems to camouflage itself in different lighting situations. (Photo: R. Naas)

My Impressions of the Reservoir Battlefield D-Day Watch

For its newest watch that pays homage to that incredible battle and the soldiers whose resilience ultimately pushed our win forward,  Reservoir has created the Battlefield D-Day watch with sandy khaki dial — stamped with the US Army’s white star. The 43mm timepiece is crafted in gunmetal PVD steel with a sandblasted finish. In all, the watch looks appropriately military, yet it was not too big for my feminine wrist and actually has an impressive presence.  I got a lot of compliments while wearing it. 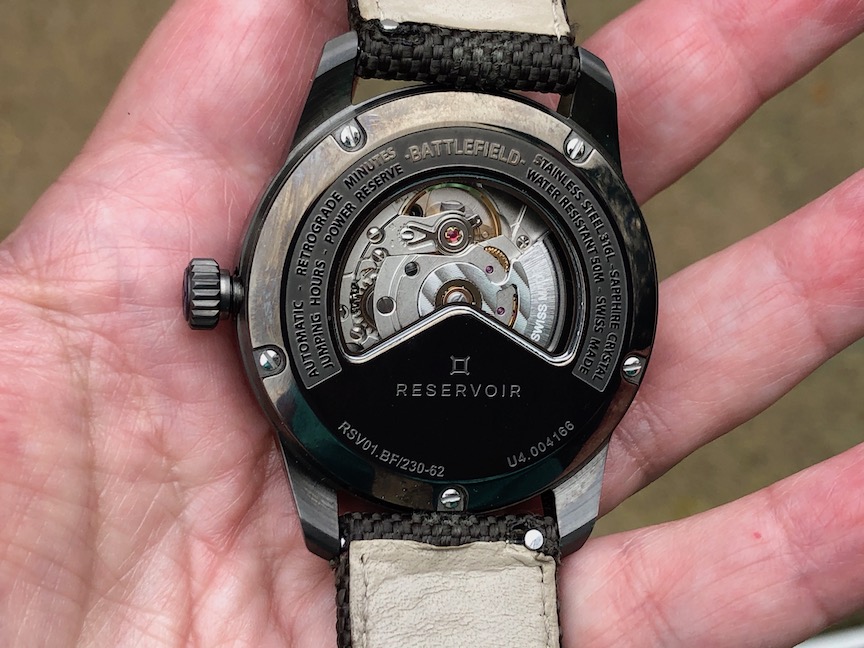 A partially transparent sapphire case back allows for viewing of the movement.

One of the things I especially liked about the watch was its camouflage abilities. The dial, called Khaki sand, seemed to morph from green to taupe — changing colors in different lights and environments. At one moment it is khaki green and at another it is decidedly brown.  It makes for an interesting moment of surprise each time you look at the watch on your wrist when outdoors. Another fine touch is the fact that the US Army’s star is nicely juxtaposed with Reservoir’s emblem logo — the same symbol that is engraved on the petrol cans that are found at the back of the all-terrain vehicles. You know you have a watch to be proud of wearing, especially if you are American. 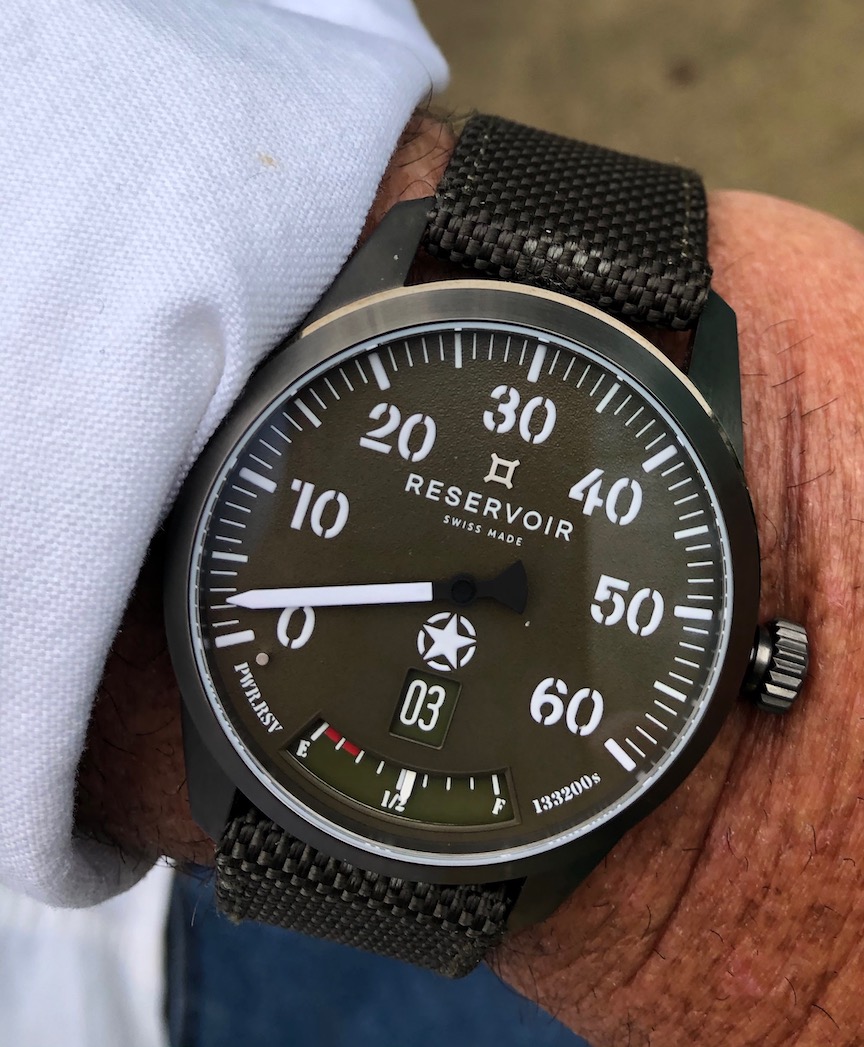 Add to that the fact that the self-winding mechanical movement boasts three horological complications: jumping hour, retrograde minute, power reserve indication. In a nutshell, it’s a powerful piece. In fact it boasts a patented proprietary 124-piece module that is on an ETA 2824-2 caliber with 37 hours of power reserve.  The jumping hour indication is in an aperture at 6:00 on the dial, right above the arc-shaped power reserve indicator. The retrograde hands trace the minutes– starting from zero at 8:00 on the dial and going around to 4:00 on the other side of the dial. When the minute  hand reaches 60, it automatically jumps back to the zero to start its time-tracking again.  If you take a look at the video below that I took while wearing the watch, it all becomes clear.

I love the fact that for a watch priced at just under $4,000 you get so much detail and so many functions. It even boasts a sapphire case back for viewing the movement. It is water resistant to 5 ATM and is sold with two interchangeable (quick-release) straps: khaki leather and NATO. Reservoir didn’t skimp on the packaging either. You would think that given the details of the watch, they could get away with a brown corrugated cardboard box, but they went in the opposite direction. The packaging is a metal box designed to emulate the ammunition boxes carried by the G.I.s during the war. It doesn’t get much better than that. A great memory to honor, a distinctive watch, cool packaging and a value-proposition price at $3,980. 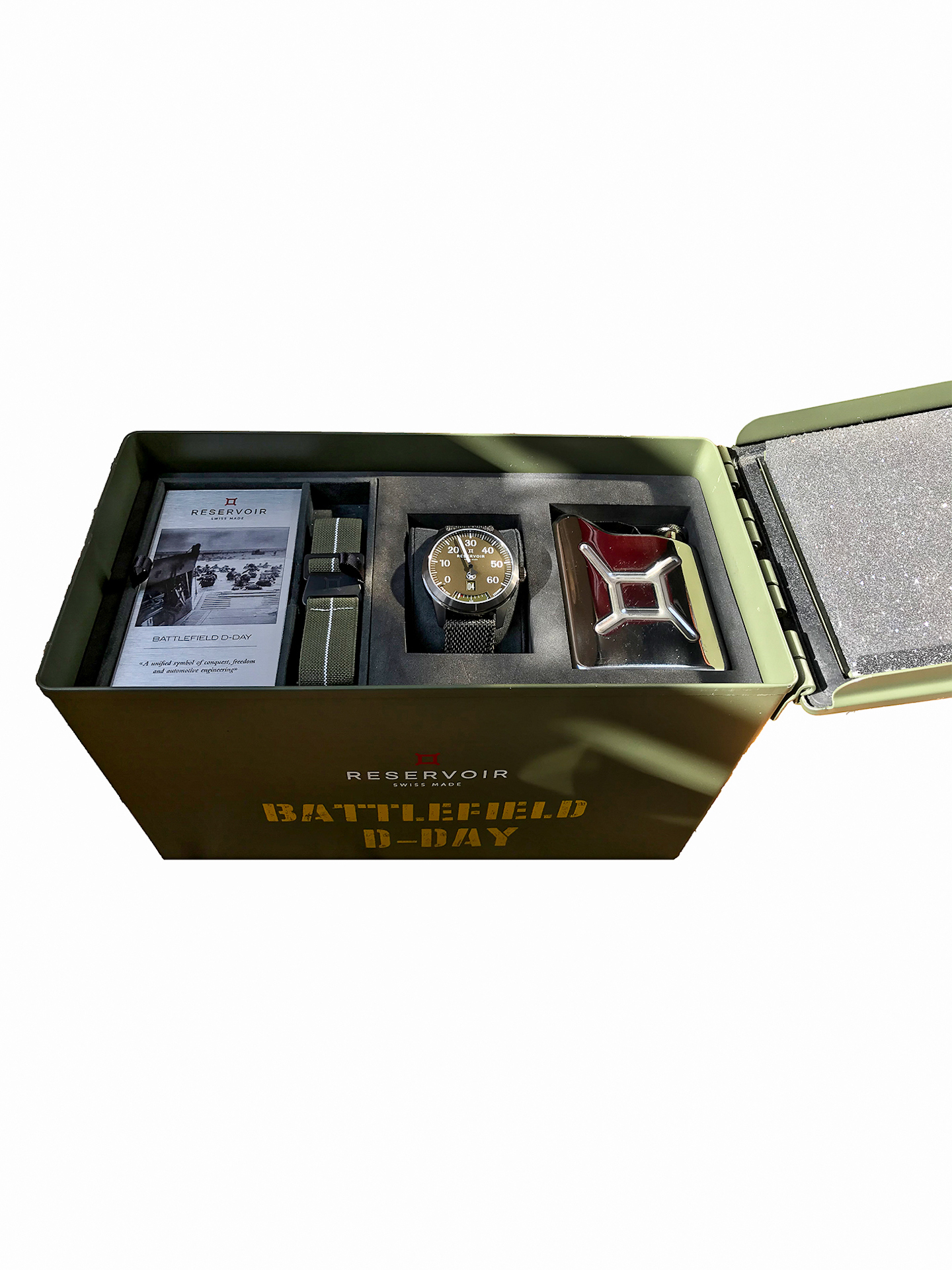 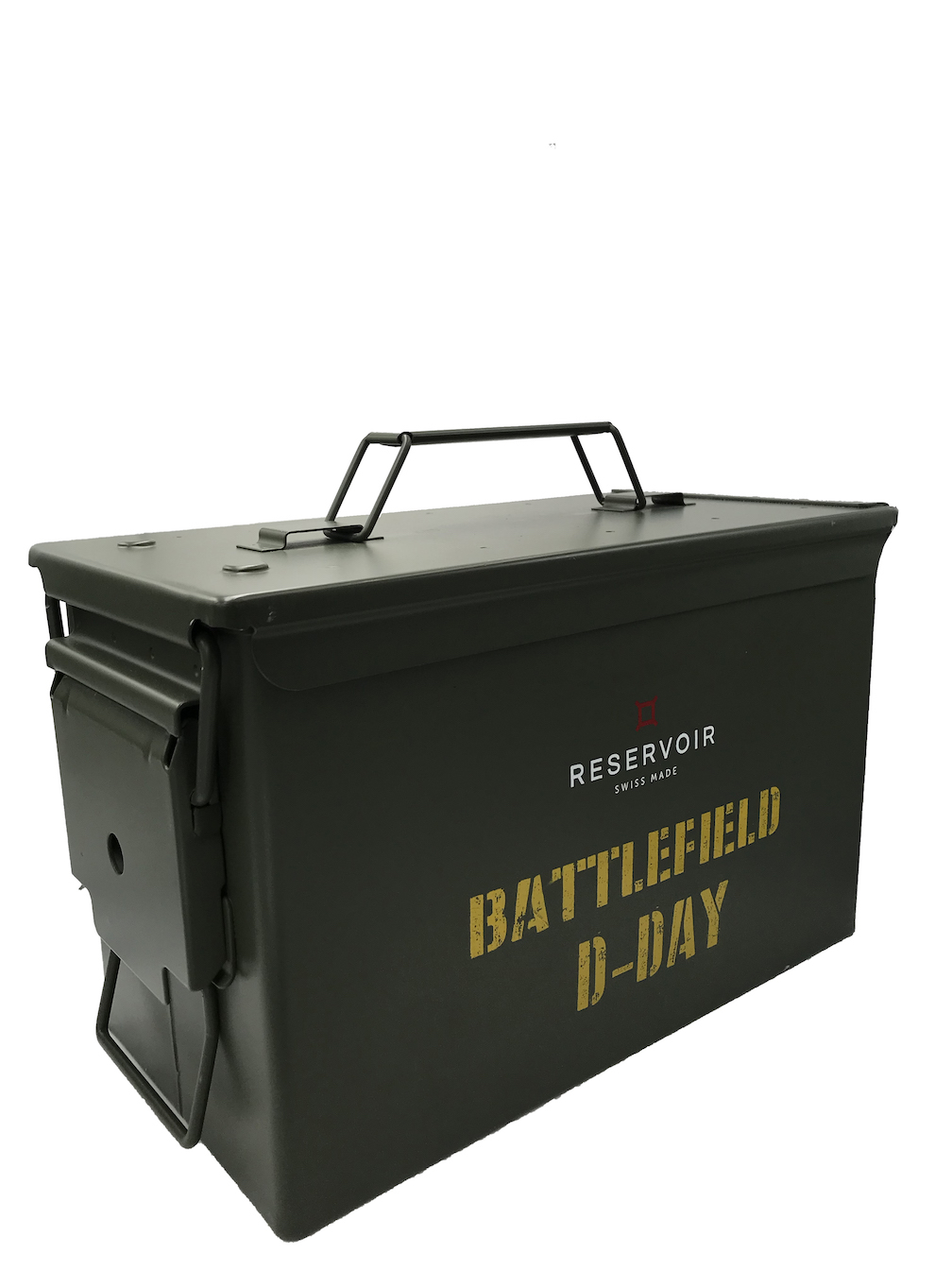