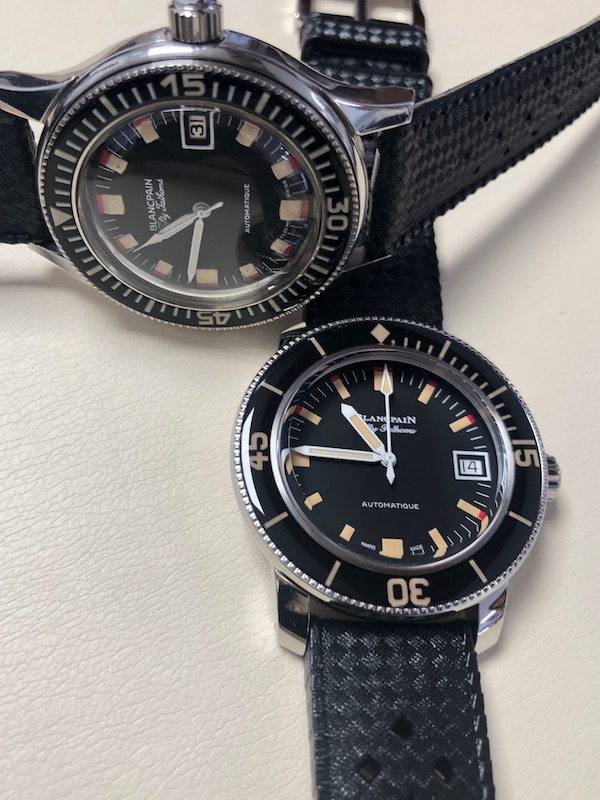 At the recent Swatch Group ‘Time To Move’ Summit  in Switzerland, we got to go hands on with some of the amazing new timepieces making their way to stores now. Today, we take a closer look at  the Fifty Fathoms Barakuda, inspired by a vintage watch.

Back in the 1950’s and 1960’s, Blancpain was already involved in diving, creating watches perfect for the deep blue sea.  Its first watches were created with the military in mind, with the first Fifty Fathoms released in 1953 for Frogmen in different militaries around the world. In fact, according to Blancpain, the French were the first to equip themselves with Fifty Fathoms models for their underwater missions.

Others followed suit, including the German Bundesmarine in the 1960s, which got their Fifty Fathoms models via Barakuda – a company specializing in the production and marketing of technical diving equipment. (Hence the derivative name.) Because the military watch was so coveted, Blancpain created a special model for the German civilian market with a distinctive style using two-tone rectangular hour-markers, white-painted fluorescent hands, and a highly visible date display at 3 o’clock. It was one of those pieces that is the inspiration for the newest Fifty Fathoms Barakuda.

As such, Blancpain’s  Fifty Fathoms Barakuda isa fairly literal recreation of that watch. According to Marc Hayek, who presented the new piece to us, Blancpain did a lot of research into the true function of a dive watch before creating the Fifty Fathoms years ago, The new piece keenly reflects that, as it had to be highly functional for underwater use.

The 40mm watch is crafted in stainless steel and is water resistant to 300 meters.  It is powered by the 210-part Frederic-Piguet 1151 self-winding movement with twin barrels and 100 hours of power reserve. (The Swatch Group owns the Frederic Piguet workshops, which were merged with Blancpain in Le Brassus in 2010.) 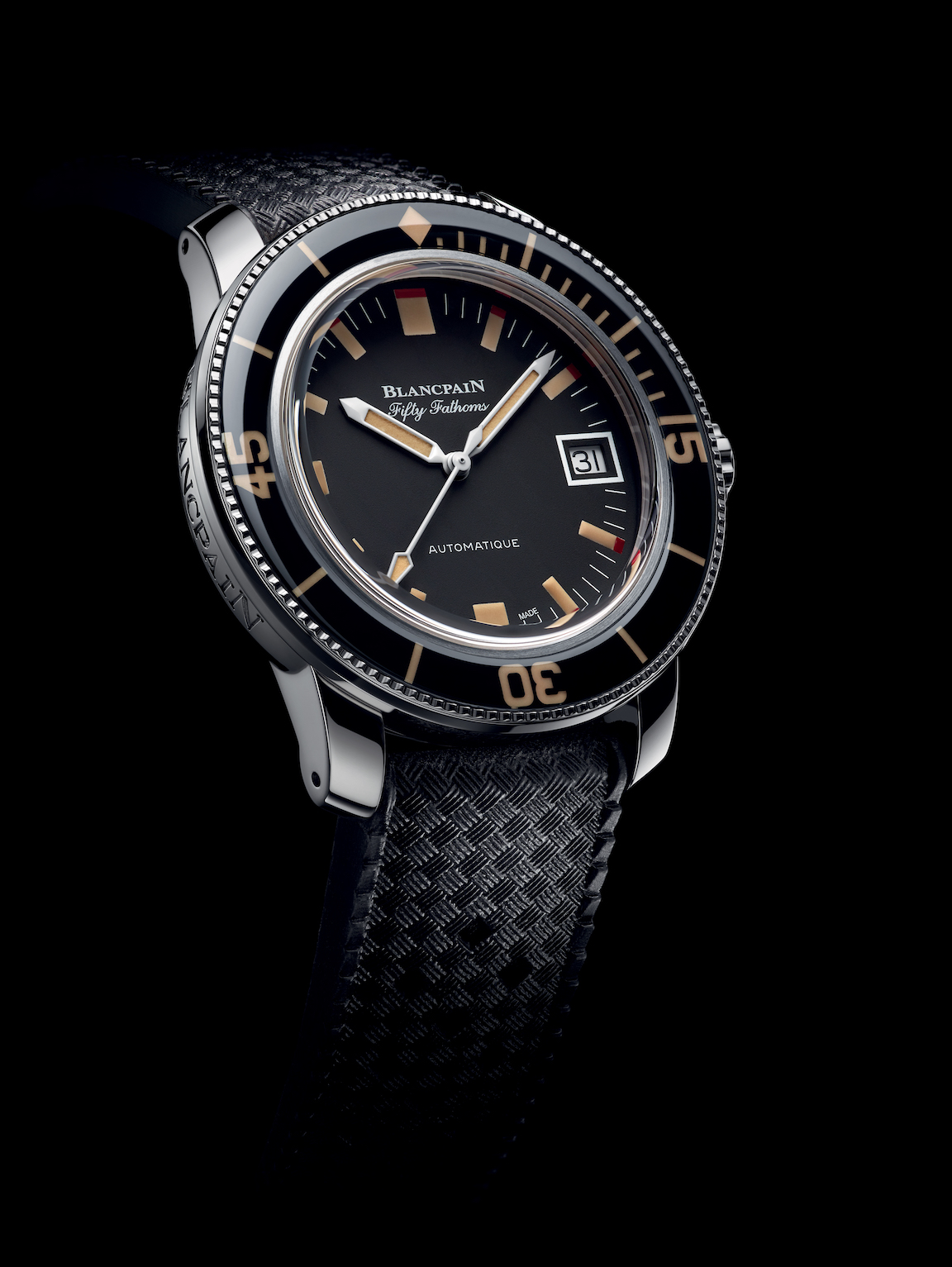 Blancpain Fifty Fathoms Automatique offers date and seconds hand in addition to hours and minutes and is water resistant to 300 meters.

In terms of looks, the Barakuda recalls some of the original codes of the 1960’s watch, including the two-tone hour markers and hands.  Against a black dial, the large red and tan hour markers are coated in Super-LumiNova for easy underwater reading. The pencil hands are white with a  Super-LumiNova coating in the center.

There is also a date display at 3:00, as well as an arrow-head seconds hand.  The sapphire bezel (yes, that’s right, the bezel is created in domed sapphire) is unidirectional with a diver countdown. Just 500 pieces are being made, each retailing for about $13,000.

A tribute model that is incredibly accurate in its presentation, the Barakuda is offered on a black tropical-style leather strap. It is a bold and rugged watch with looks that define its role underwater.  If I were a diver (which I would not be since being deep underwater terrifies me), it is the watch I would want. 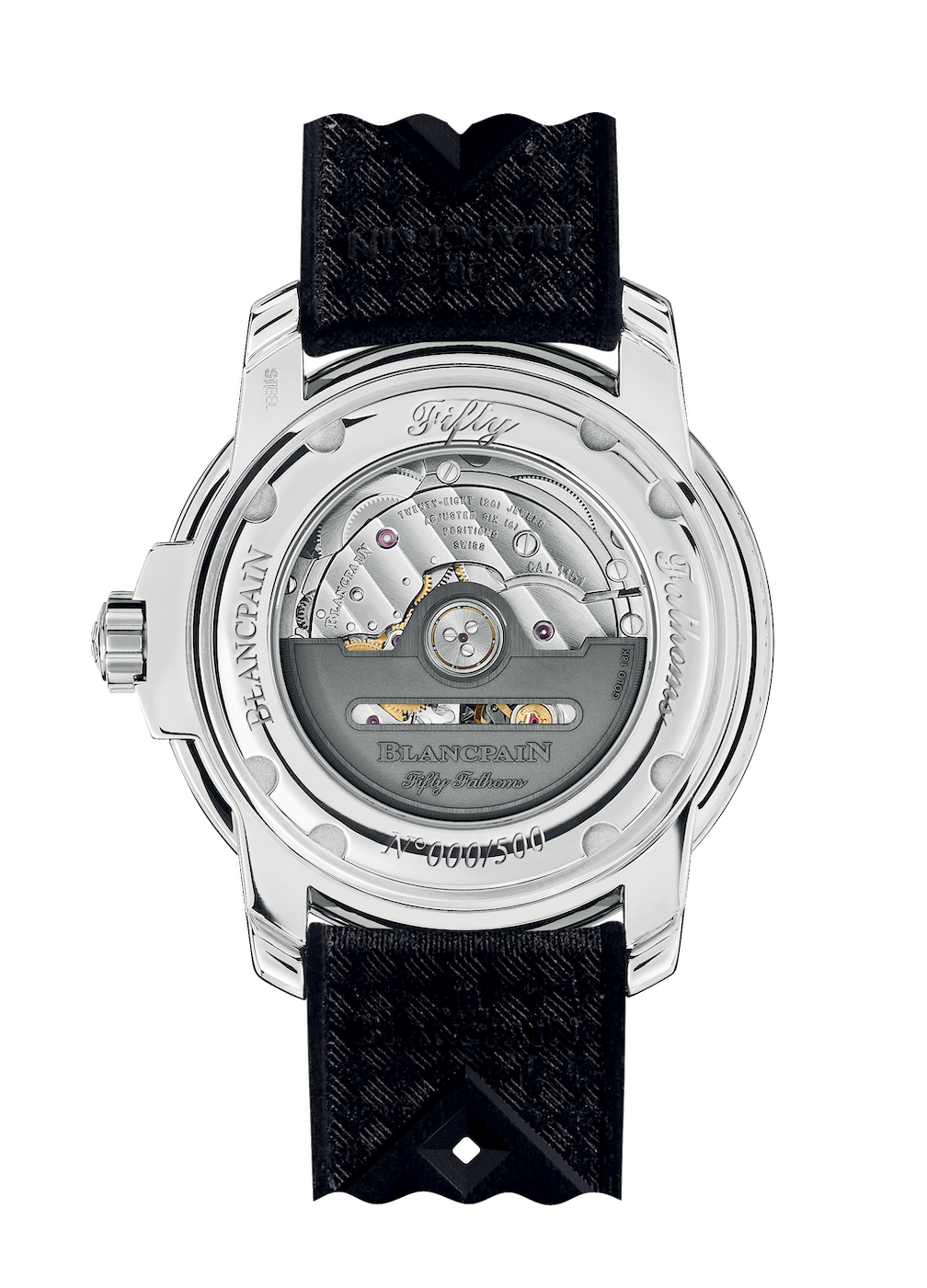 The movement of the Blancpain Fifty Fathoms Automatique is visible via a sapphire caseback.