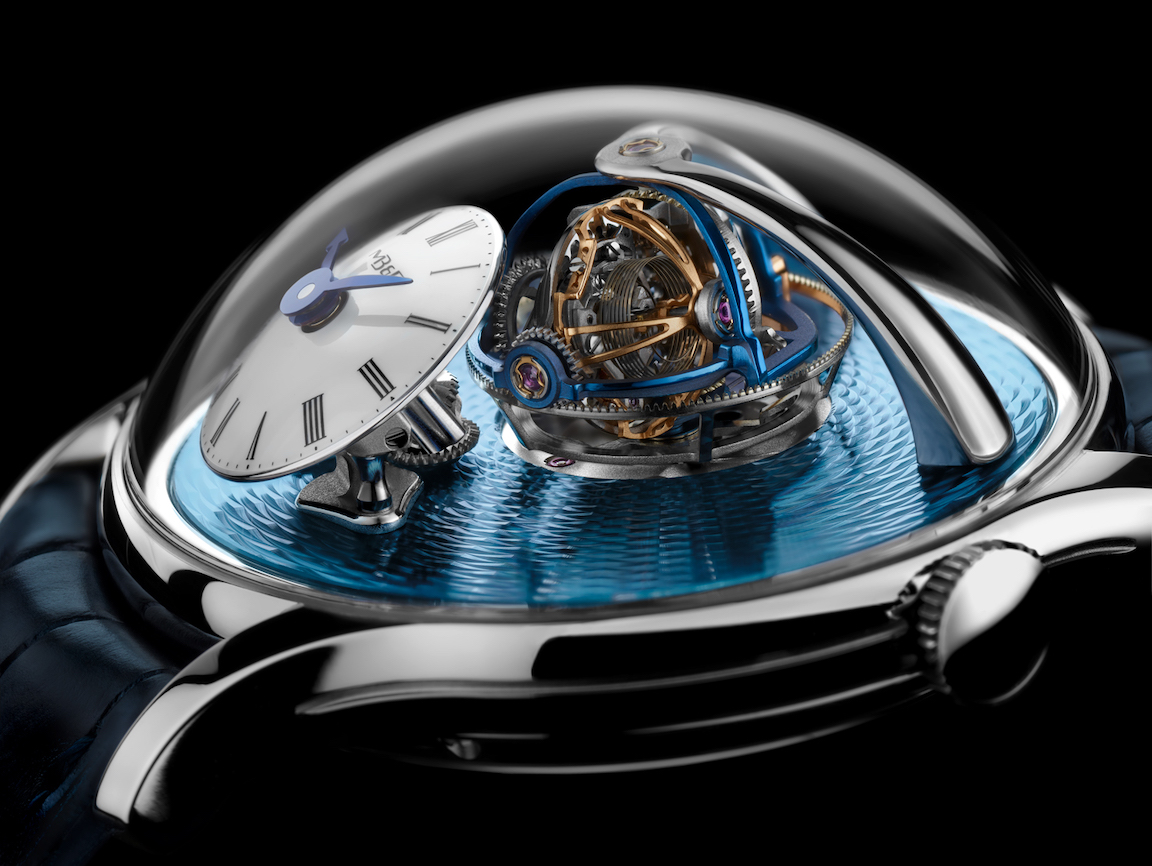 A couple of months ago, I had the opportunity to go hands on with a totally embargoed MB&F watch: the Legacy Machine Thunderdome. It was hard to keep my excitement about this watch in check, but now, I am finally able to bring a hands-on review of this watch to the forefront.  Let me start by saying this is a very special piece. It houses the world’s fastest triple-axis regulating mechanism and boasts three world firsts. 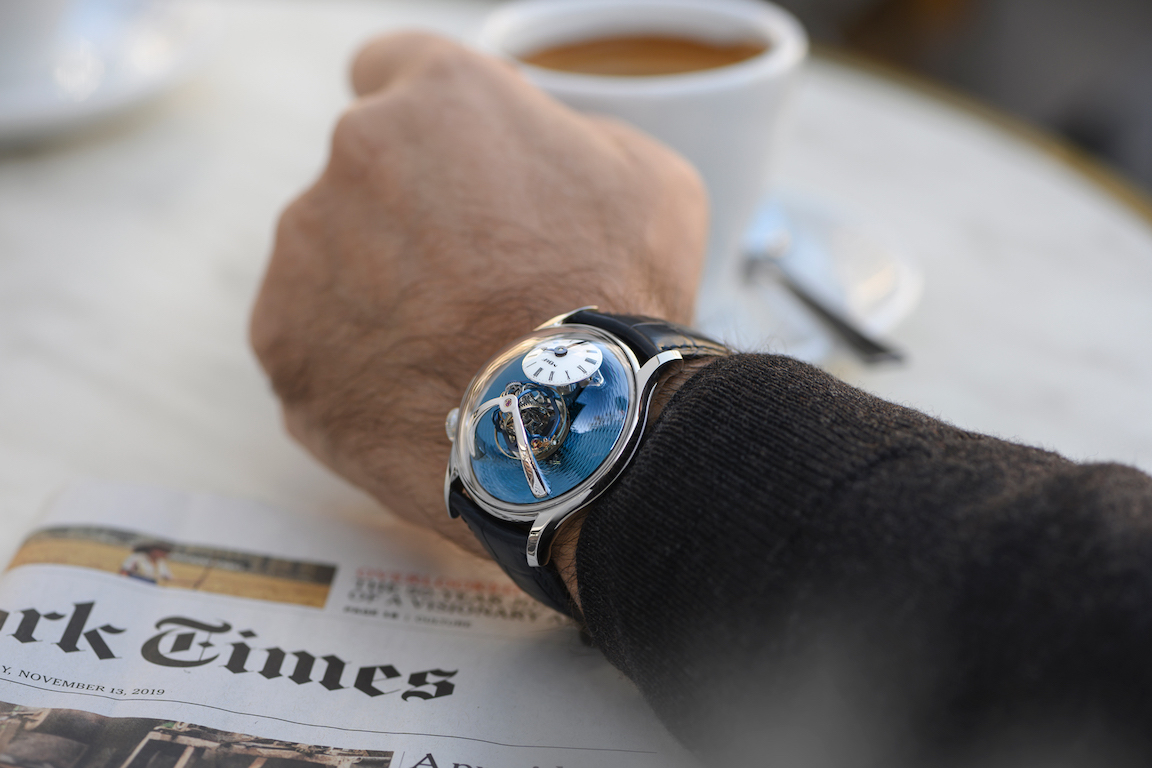 Don’t be fooled by the first glance at this watch. Earlier this year, MB&F unveiled the Legacy Machine FlyingT  — its first watch for women. It featured a huge bubble domed sapphire crystal and a vertical movement architecture. It was a huge success — even winning the Best women’s complication award at GPHG. Now, with the Legacy Machine Thunderdome, we see a bubble sapphire crystal,  vertical architecture of the movement and an angled dial. That is where the similarities stop, though, because this watch was four years in the design and development stages and is unlike anything else in the watch world.

The Mechanics Behind LM Thunderdome 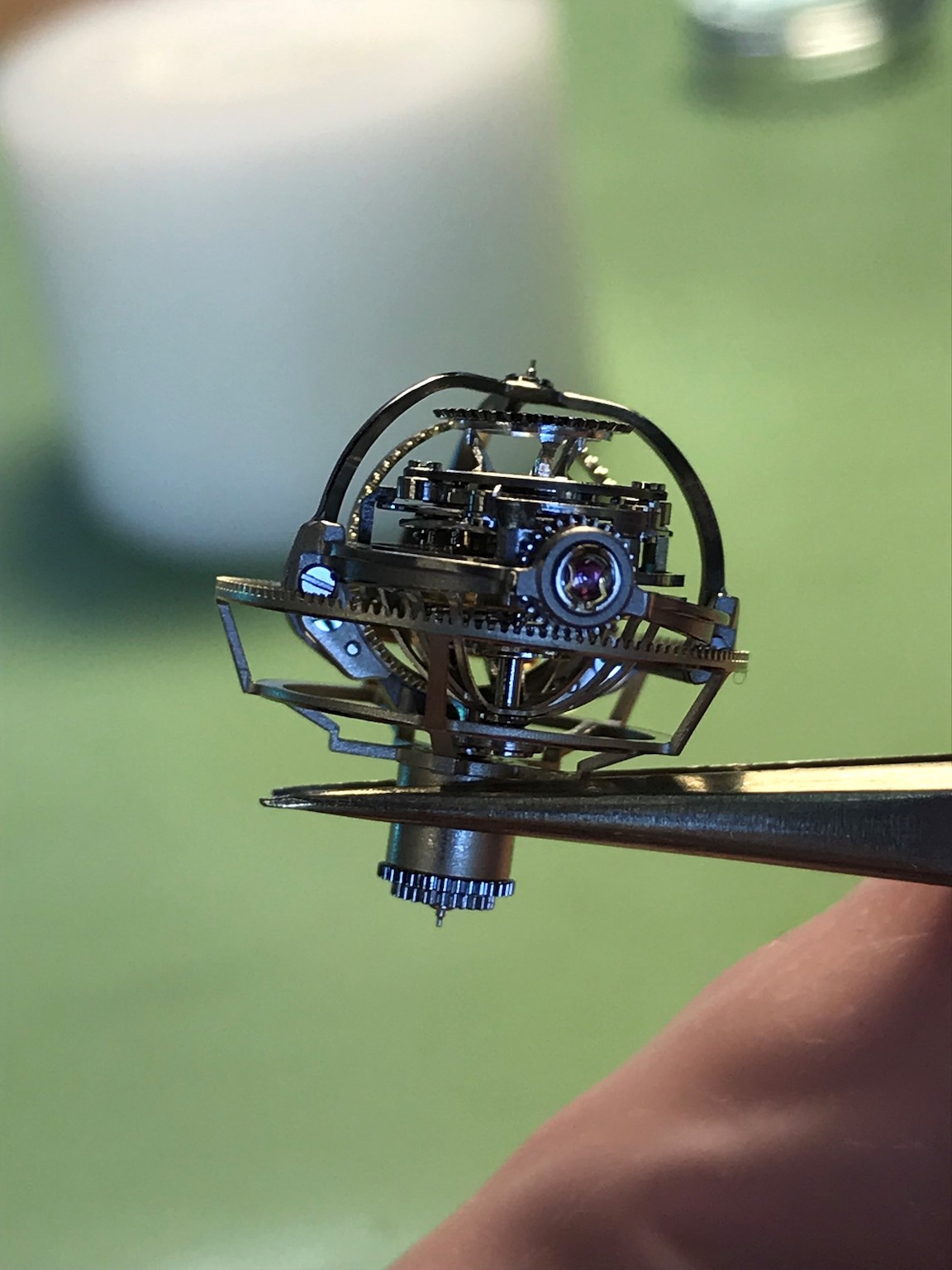 The LM Thunderdome represents the first collaboration between two watchmaking legends: Eric Coudray and Kari Voutilainen. The movement is jointly signed attesting to its rarity. With such great minds, it is no wonder that the watch also boasts a proprietary TriAx mechanism with “three axes revolving at different speeds and on different plaines, in record-breaking 8 seconds, 12 seconds and 20 seconds” respectively. The watch also has an unusual combination of hemispherical balance, helical hairspring and Potter escapement.

Lost you? Don’t worry. I’ll explain soon enough. Essentially, the ever-rocking visionary Maximilian Busser, founder of MB&F, gave a single directive to Eric Coudray — who may well be one of the great geniuses of today’s watchmaking. (Eric Coudray first became known when he developed the Jaeger-LeCoultre Gyrotourbillon in 2004. From there, he went on to create visually stunning mechanisms for other brands, as well, that were also award winners thanks to their technically advanced complications.) That directive from Busser to Coudray was to “make the craziest, most cinematic three-axis tourbillon ever.”

He did. In fact, he went way beyond a triple-axis tourbillon, creating the proprietary MB&F TriAx. This is a triple-axis rotating escapement with a two-cage configuration (instead of the typical one cage for each axis) that allows for more visibility of the movement.  Additionally, Coudray turned to the Potter escapement (with fixed escape wheel instead of a mobile escape wheel) to control the rate of energy escaping from the barrel. The Potter escapement makes it possible to have higher rotational speeds. The inner structure completes one turn in 8 seconds, the intermediate cage rotates once very 12 seconds and the outer cage turns fully once every 20 seconds. The components seem to whirl by at crazy speeds.

Additionally, the Potter escapement occupies less space — and that space can now be used for the balance and hairspring. The balance is created in a hemispherical format and wraps around a helical hairspring for a new regulating organ. Coudray is known for his outrageous and audacious movements, but this one may be the pinnacle. 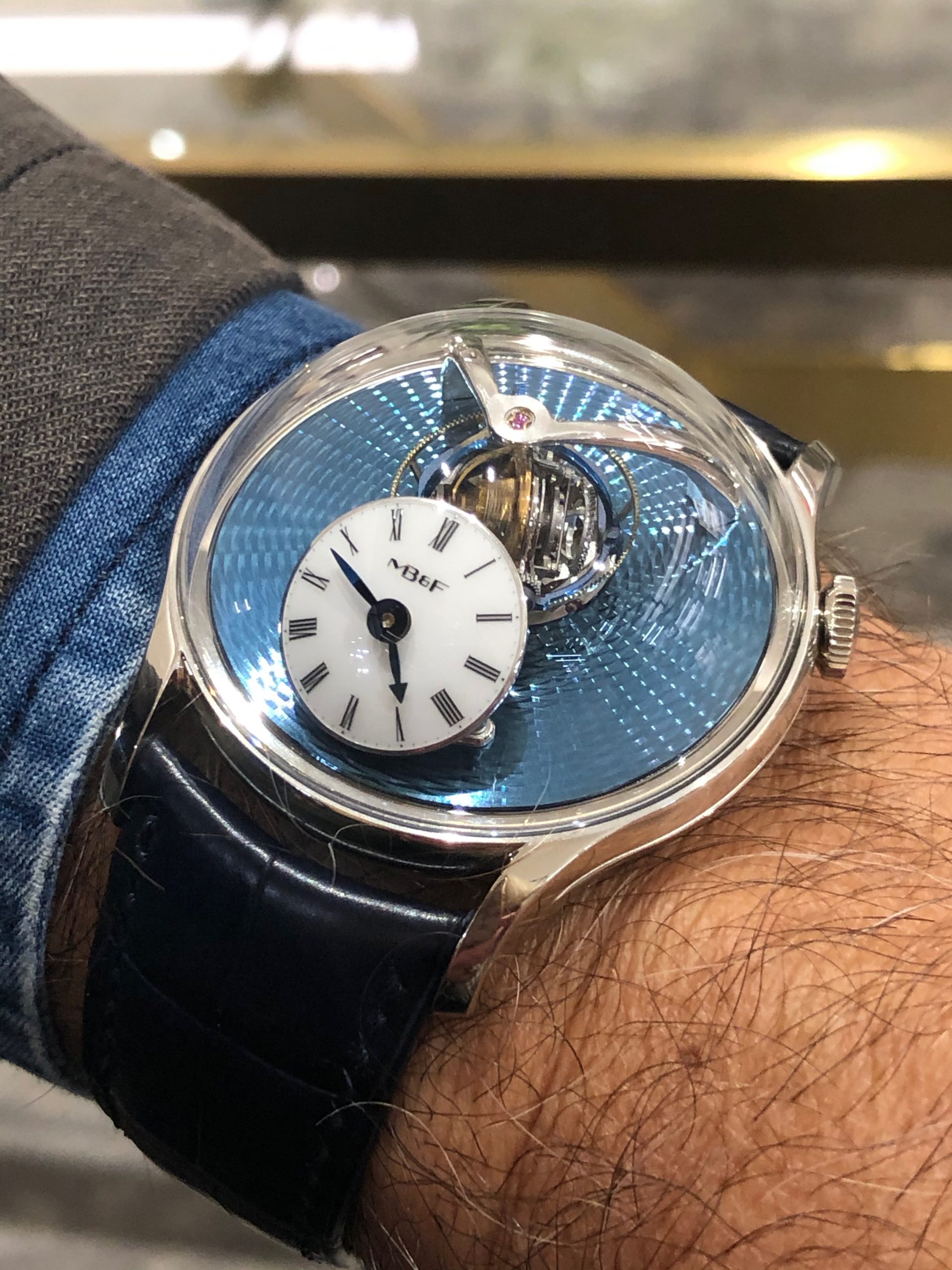 The Incredible Finishing of the Movement

To finesse each of the wildly advanced and unusual components and endow them with classically beautiful aesthetics, Kari Voutilainen — master at finishing and guilloche — stepped in. Not only can the beautiful finishes of each part be seen via the domed sapphire crystal, but also via the sapphire casebook, where the manual-wind triple-barrel caliber struts its stuff. For this watch, Voutilainen has applied his signature style of finish even on the ratchet wheels, giving them an unparalleled shimmer in the light. In his workshops, Voutilainen carefully finishes every one of the 413 components of this movement — elevating them to utter perfection. He even created the guilloche dial that appears on each watch. 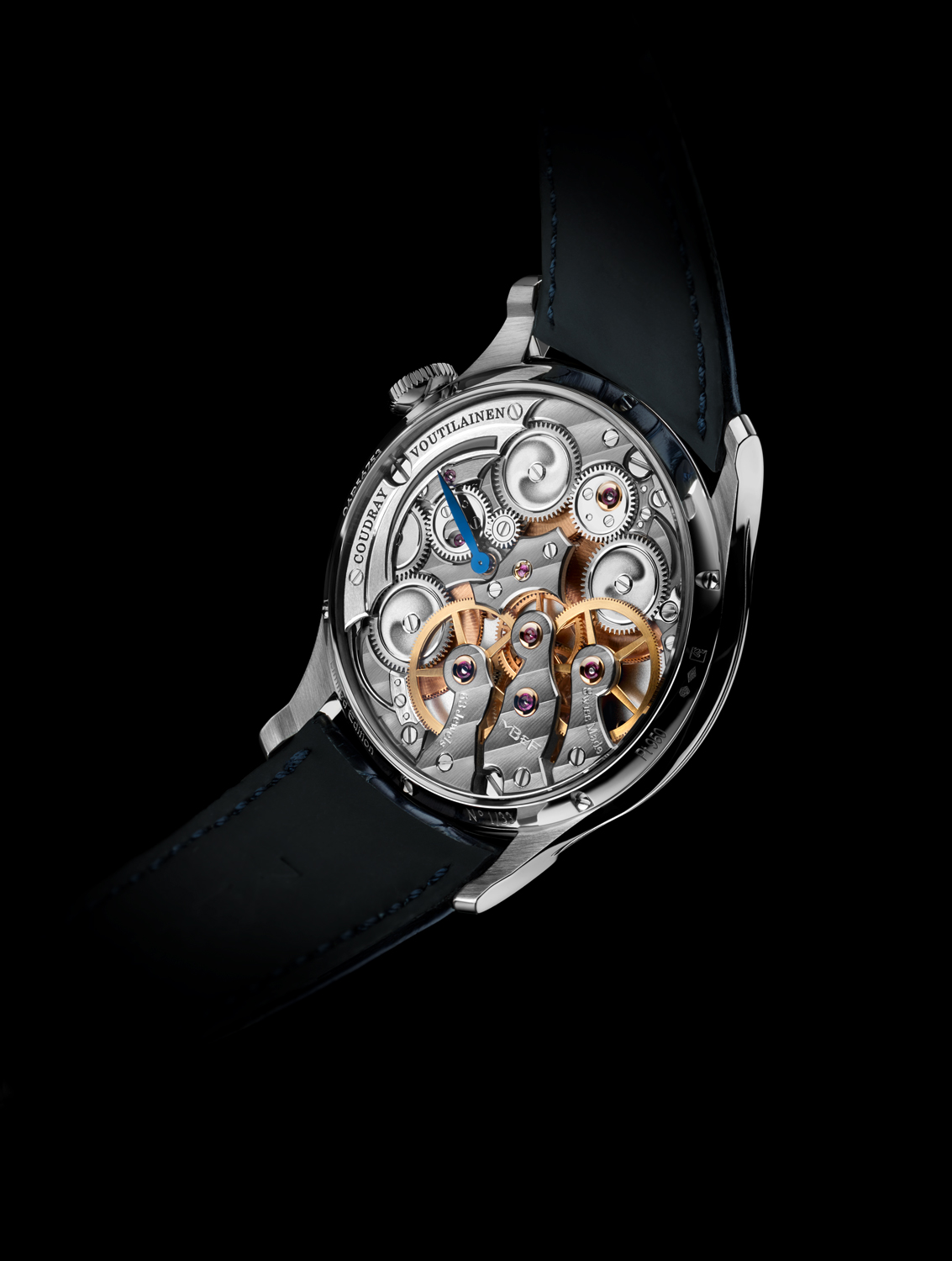 The case back of the MB&F Legacy Machine Thunderdome is sapphire, allowing for a view of the beautifully finished caliber.

Says Voutilainen, “In such a complex project, with so many different considerations, I chose the traditional method of hand-drawing the movement rather than working with computer software. It allowed me to have a much better feel for the proportions and the choices that needed to be made about aesthetics and function.” 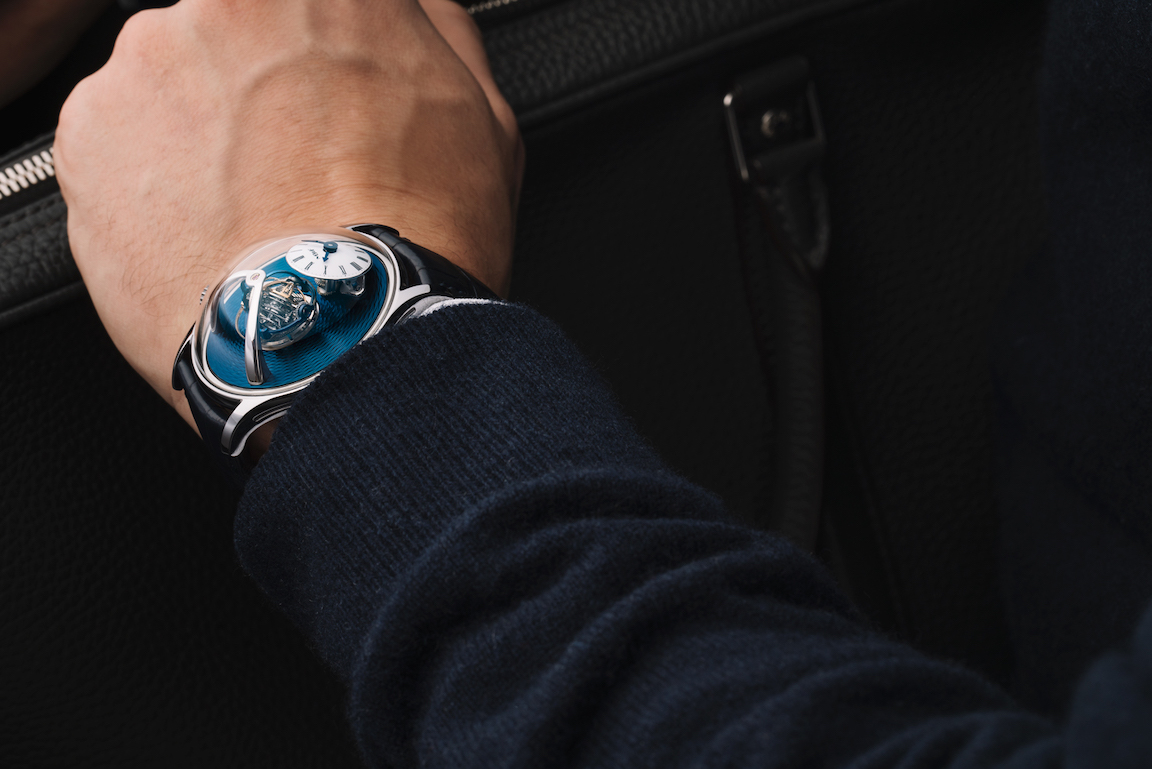 MB&F founder Maximilian Büsser says, “One of the many things that makes me incredibly happy about this piece is that we got to bring together two people I adore in this industry; who are incredibly talented, have completely different styles and personalities, and have never had the chance to work with each other”.

The LM Thunderdome is being created in two limited editions: 33 pieces in platinum with a light blue guilloche dial and 10 pieces in tantalum — five with a dark-blue guilloché dial and five with an inlaid aventurine dial. The tantalum versions are exclusive to The Hour Glass retailer in Asia. 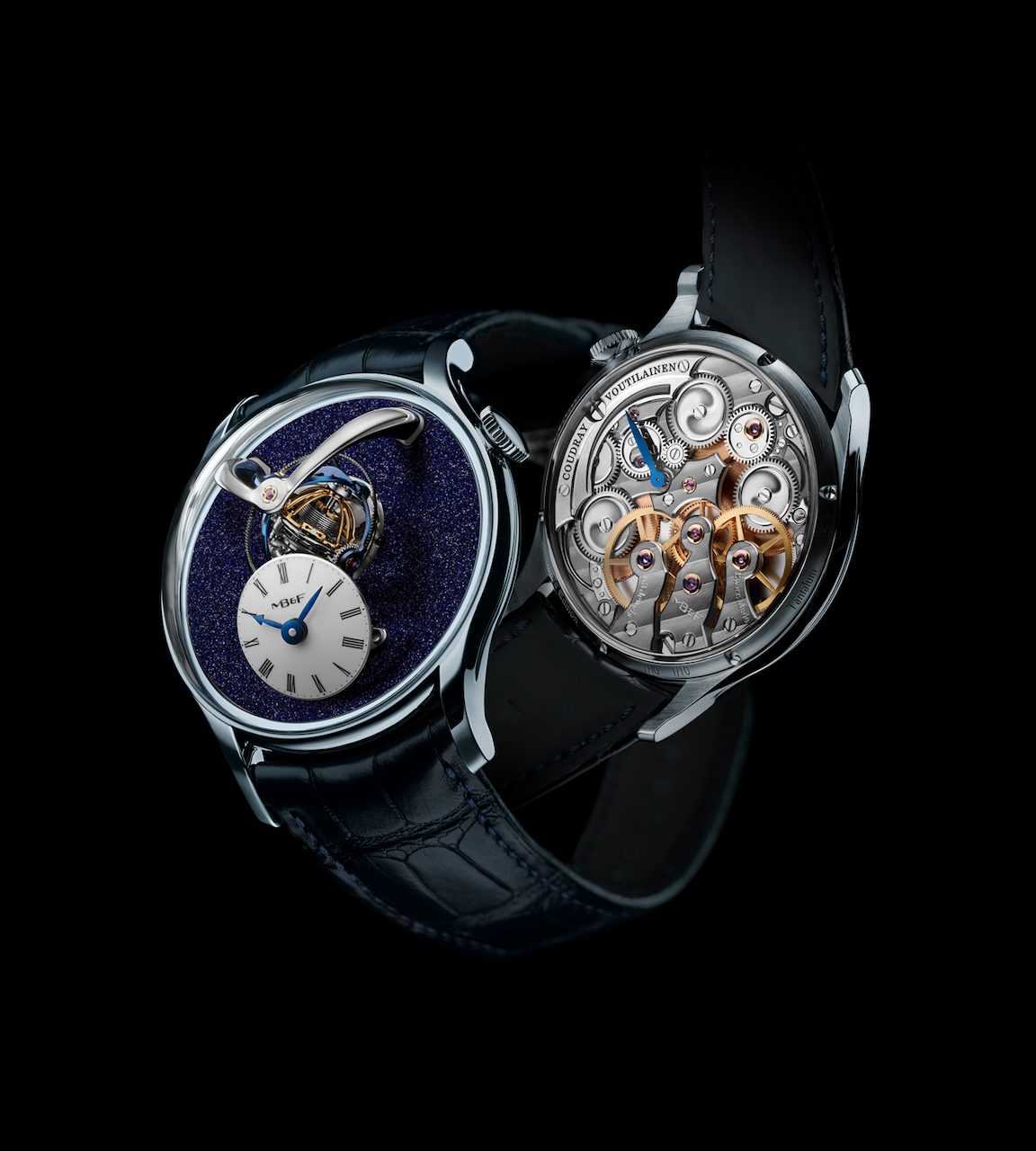 MB&F Legacy Machine Thunderdome in tantalum is being made in a limited edition of 10 pieces. It is made in honor of the 40th anniversary of the Asian retailer The Hour Glass.

Impressions of the LM Thunderdome

I said it a bit earlier in this review. This watch is like nothing you have ever seen before in the watch world. The speed with which the three different axis rotates is mind blowing. That, coupled with the wide open space of the movement that allows for great viewing of the caliber and its incredible high finishes thanks to Kari Voutilainen makes this a must-see (and have) watch.  There is nothing — I repeat — nothing — not to like here. One hands-on with it and you will be mesmerized forever. Of course in platinum it retails for $280,000 — if that has any influence on you.

Movement developed for MB&F by Eric Coudray and Kari Voutilainen.

Regulating mechanism featuring 3 fast rotation axes revolving at different speeds and on different planes. The rotation speeds of the axes starting from the centre are respectively 8 seconds, 12 seconds and 20 seconds. The combined weight of the multi-axis mechanism is nearly 1g.

Hours and minutes displayed on a 58° vertically tilted dial

Power reserve indicator on the back of the movement

Case: Material: launch edition in platinum 950 and The Hour Glass editions in tantalum

Sapphire crystals on top and display back treated with anti-reflective coating on both faces. 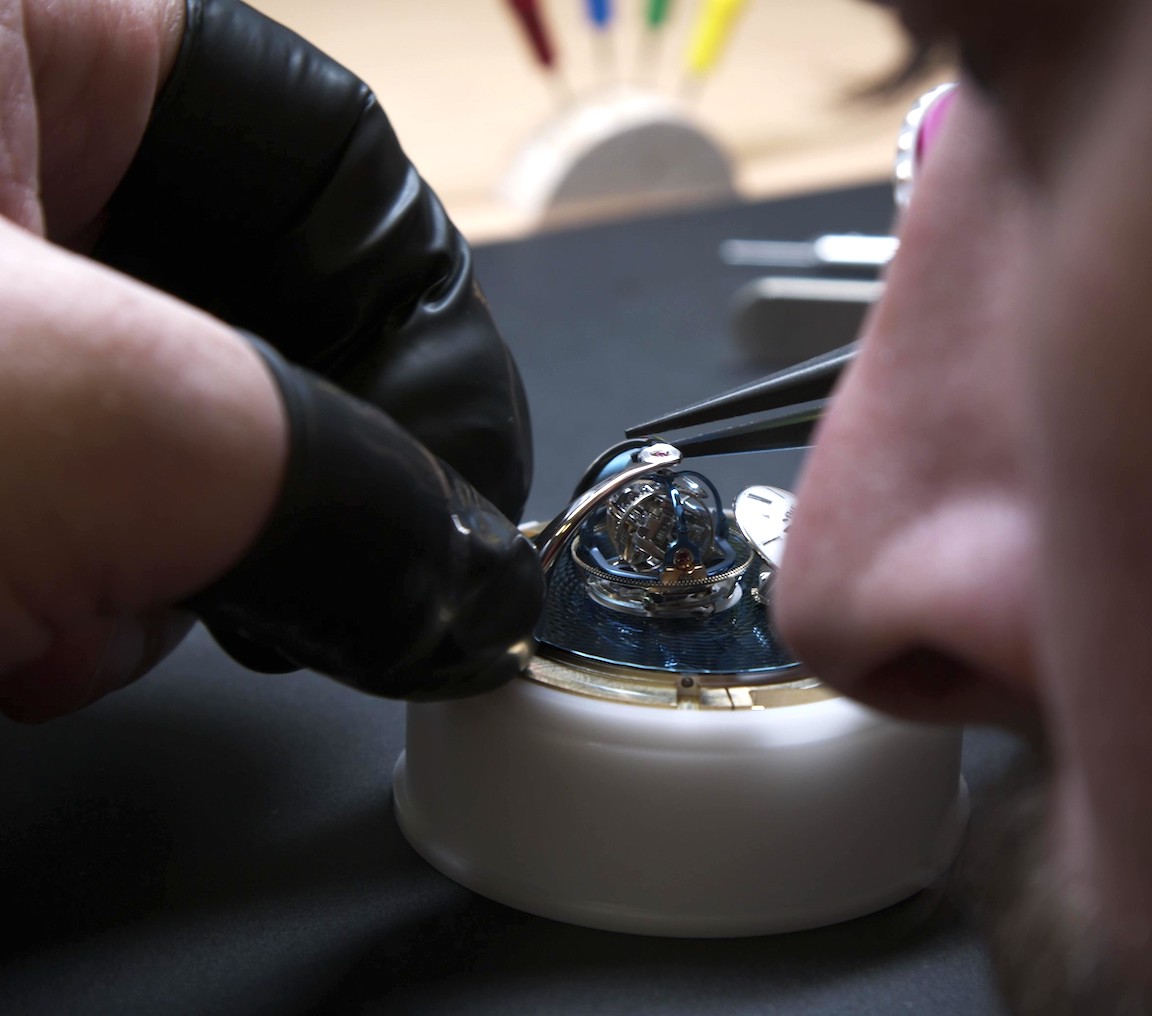 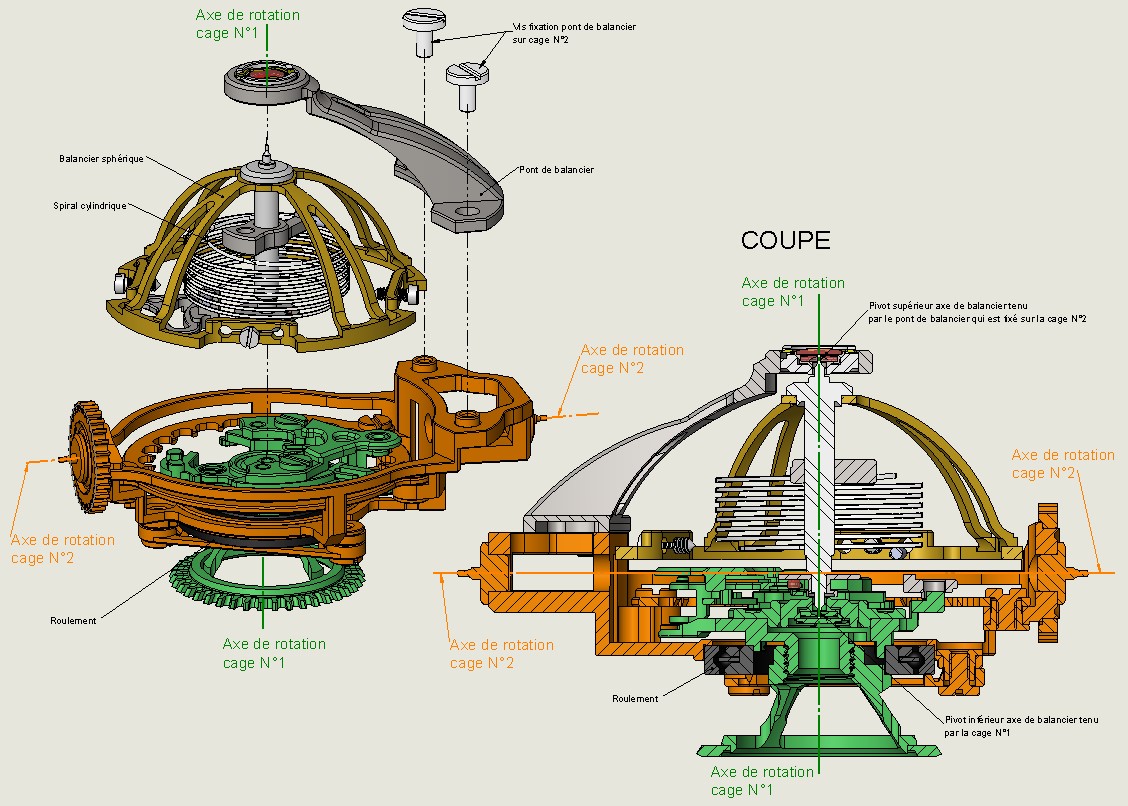