Go Behind The Scenes: Martin-Baker Ejection Seats And Bremont

It’s a powerful team: British watch brand Bremont and British aviation company, Martin-Baker, responsible for supplying the majority of the western world’s Air forces with fighter ejection seats. The two companies teamed up 10 years ago at the request of Andrew Martin, Vice President of Business development for Martin-Baker and the great-grandson of the founder of the famed military and ejection seat company, Sir James Martin. Andrew Martin, an avid watch collector, wanted to create a Martin-Baker watch that could withstand the same incredible forces that the company’s life-saving ejections seats sustain. The goal was to have a watch that is available only to those survivors who ejected from an ill-fated plane in a Martin-Baker seat. 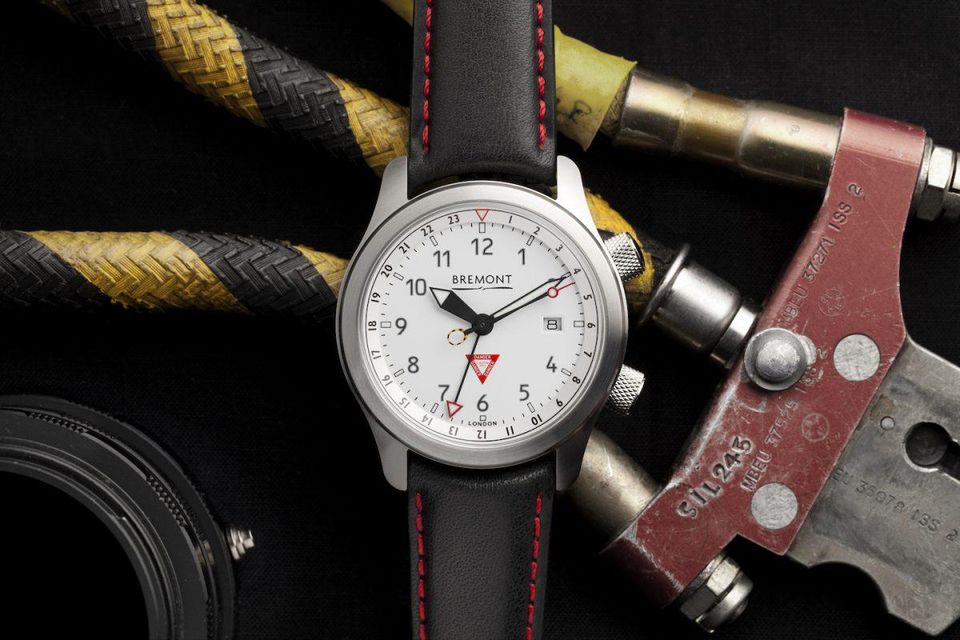 Bremont MBIII/10th GMT chronometer made to honor the 10-year partnership between Martin-Baker and Bremont.

The match seemed to be a perfect fit, with Bremont eventually creating evolutions of the original Martin Baker MB1 (that was reserved only for those who ejected) that were offered to the public at large. In fact, just this year, they unveiled the newest MBIII/10th GMT chronometer to honor that 10-year partnership. Before I get to that watch, though, I want to take you behind the scenes of Bremont and Martin-Baker to learn how this partnership formed and where it has led. 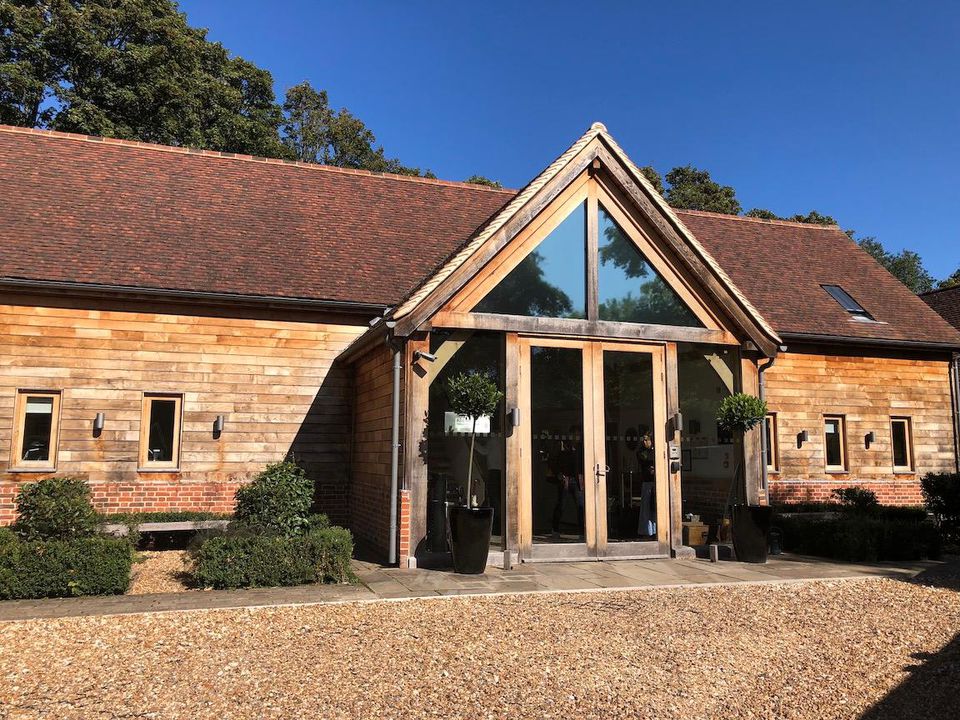 Currently Bremont, located in Henley-on-Thames, has several workshops spread around town. The company is breaking ground to build a single state-of-the-art all-inclusive Manufacture.

I was in London last year on business, when I found myself with a free day. Perfect, I thought, to visit Bremont. Bremont, founded in 2002 by brothers Nick & Giles English, is re-vitalizing the British watchmaking world. Currently, the company operates from several different locations in Henley-on-Thames, but has laid the groundwork to build an all-new state-of-the-art facility that will bring the entire production of parts, cases, watchmaking and assembly under one roof. This will mark the first time that a full-fledged watch company of Bremont’s size – building thousands of watches a year – will establish such a Manufacture just outside of London.

Since its founding, Bremont has been committed to British engineering and has been dedicated to creating aviation and military watches. In fact, in addition to its aviation-inspired timepieces available to the general public, the brand creates specialty watches for some of the most exclusive and elite military squadrons around the world. That fact, coupled with the fact that the company is British and one of the largest chronometer producers globally, led Andrew Martin to approach Bremont. (Lucky for me, Bremont suggested that I also visit Martin-Baker — a very rare offer and I jumped at the chance to tour this highly secretive facility.) 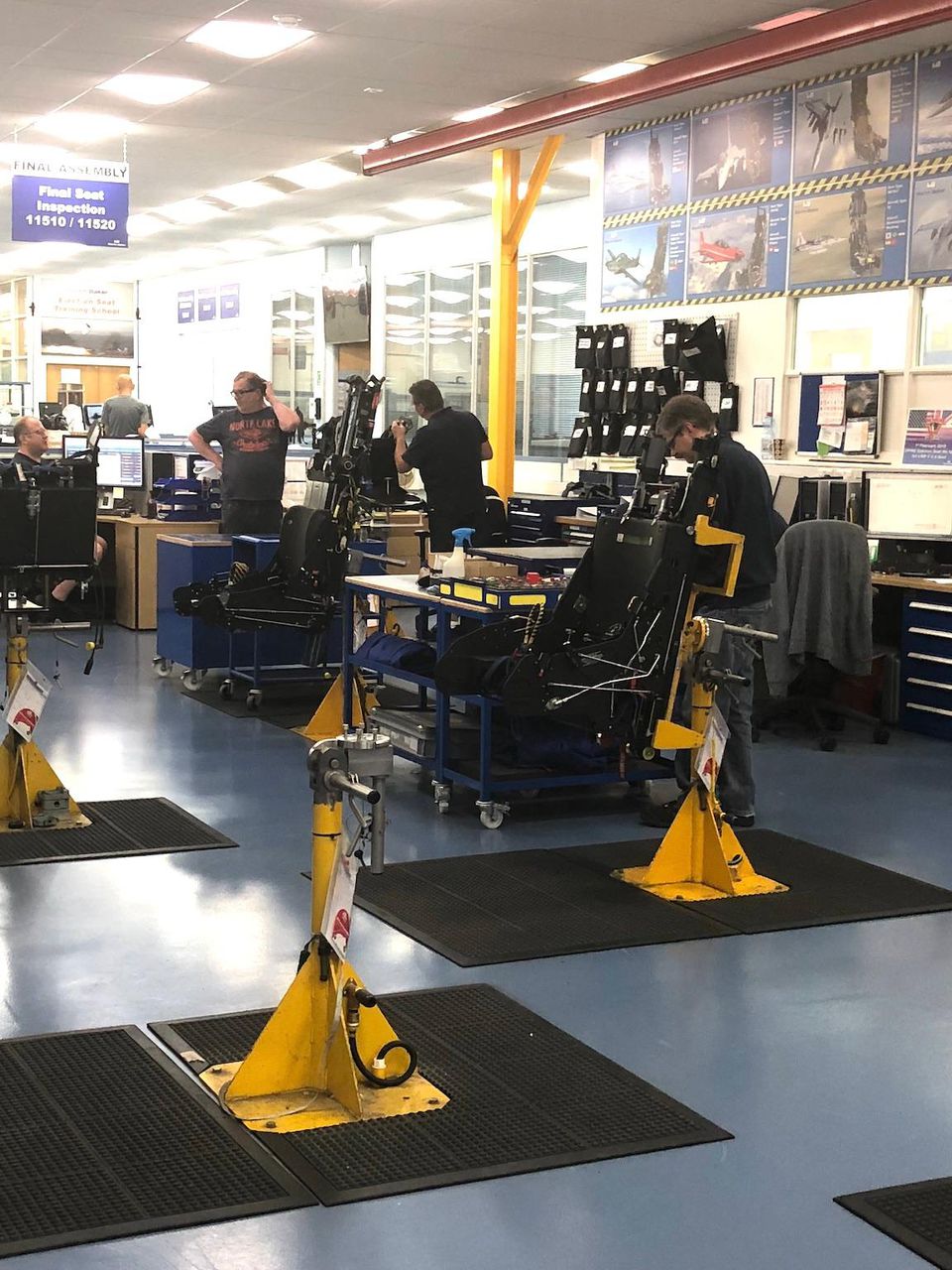 It was in 2007, that Andrew Martin invited the Bremont brothers to the manufacture where the ejection seats are built. He wanted a partner to create watches with the Martin-Baker name on them but also built with the same rugged durability that defines Martin-Baker. As such, Martin-Baker and Bremont opted to challenge conventional watch design in an effort to design a timepiece that could endure the same rigorous testing programs that the ejection seats experience and still come out working. It took two years to create – and repeatedly test — such a watch. 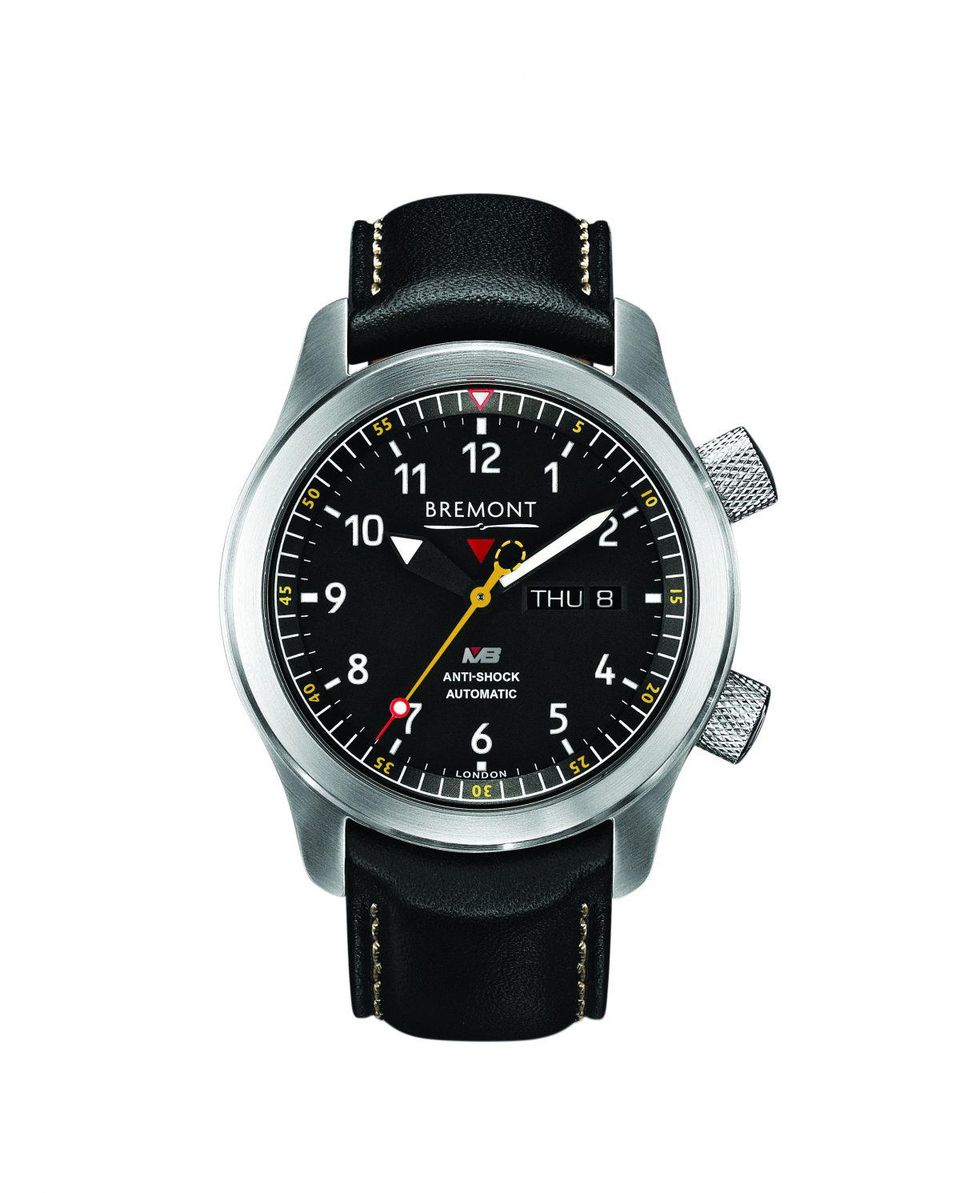 The Bremont MB1 is only sold to pilots who have ejected using a Martin-Baker ejection seat.

“When Andrew talked to us about making a Martin-Baker watch for people who have been ejected, we knew we would have to go through a lot of testing,” said Nick English. “When you see those planes coming in on an aircraft carrier, you know they take a beating. The ejection seats are pounded, they’re subjected to sea air and salt, they have to be built to last for 30 years on a plane. The watches would have to be designed to withstand all of the shocks and elements the seats are. It was an incredible challenge and this engineering is something we are very proud of.” 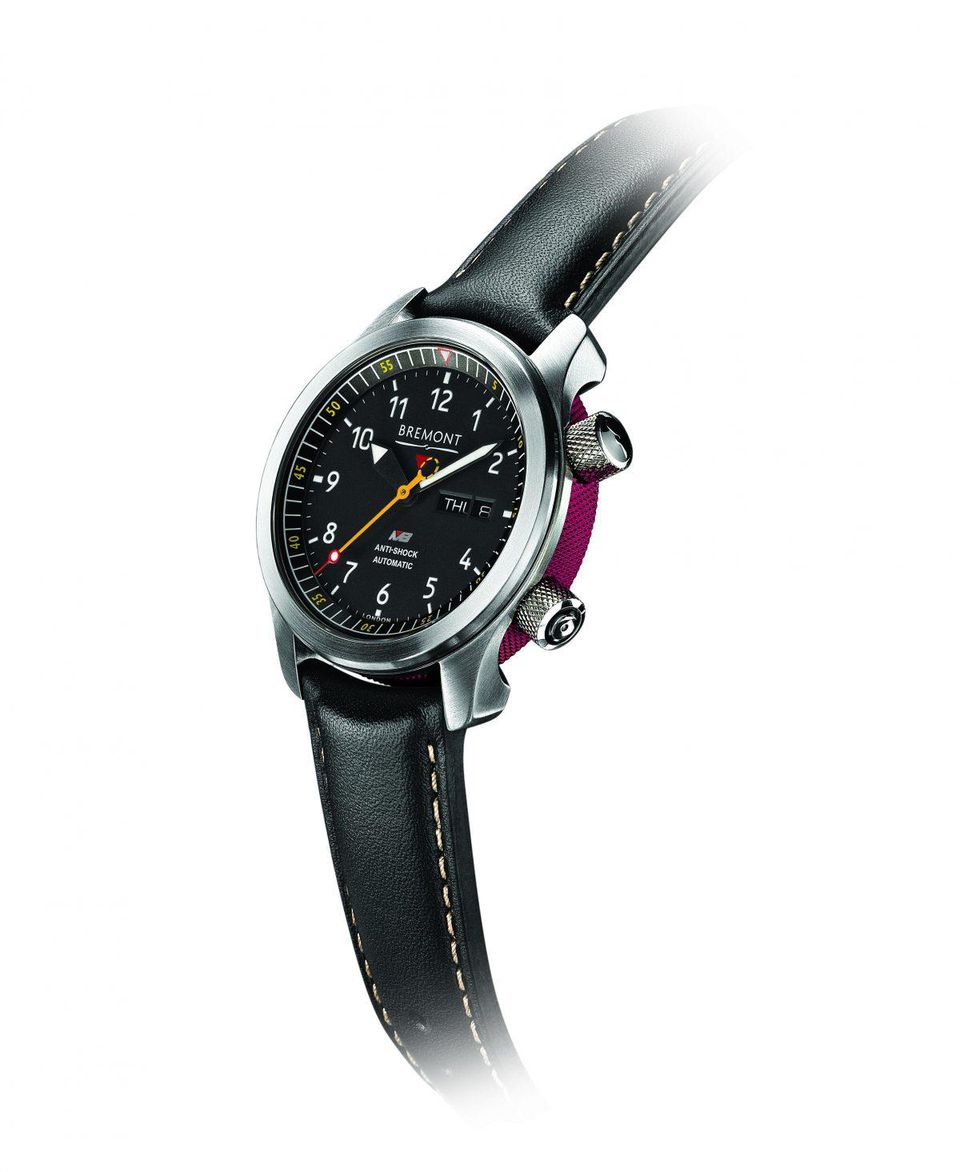 Martin-Baker Puts MB1 To The Test(s)

To create a watch that could sustain the pummel of an ejection, Bremont and Martin-Baker developed an engineering concept that would essentially suspend the movement using ball bearings and a gimbal of sorts and place it inside one of the most complex cases on the market. The movement of the Bremont MB is attached to the inner case with a flexible ring and floats within the Bremont patented Trip-Tick® case. This minimizes shocks. Additionally, the inner case made of soft iron protects against magnetism.

Because Andrew Martin wanted to be sure the watches could withstand the ejection process before offering this watch to the thousands who have ejected and lived through it, the two brands agreed to have the watches “Tested Beyond Endurance.” Bremont MB1 watches undergo an exhaustive amount of testing, right along with the seats. Testing for salt-water resistance, pressure and altitude tests, extreme temperature, sudden impact, and at speeds of up to 650 mph. The watches have even been frozen in ice at -46 degrees for four hours to simulate the atmosphere in the Himalayas. 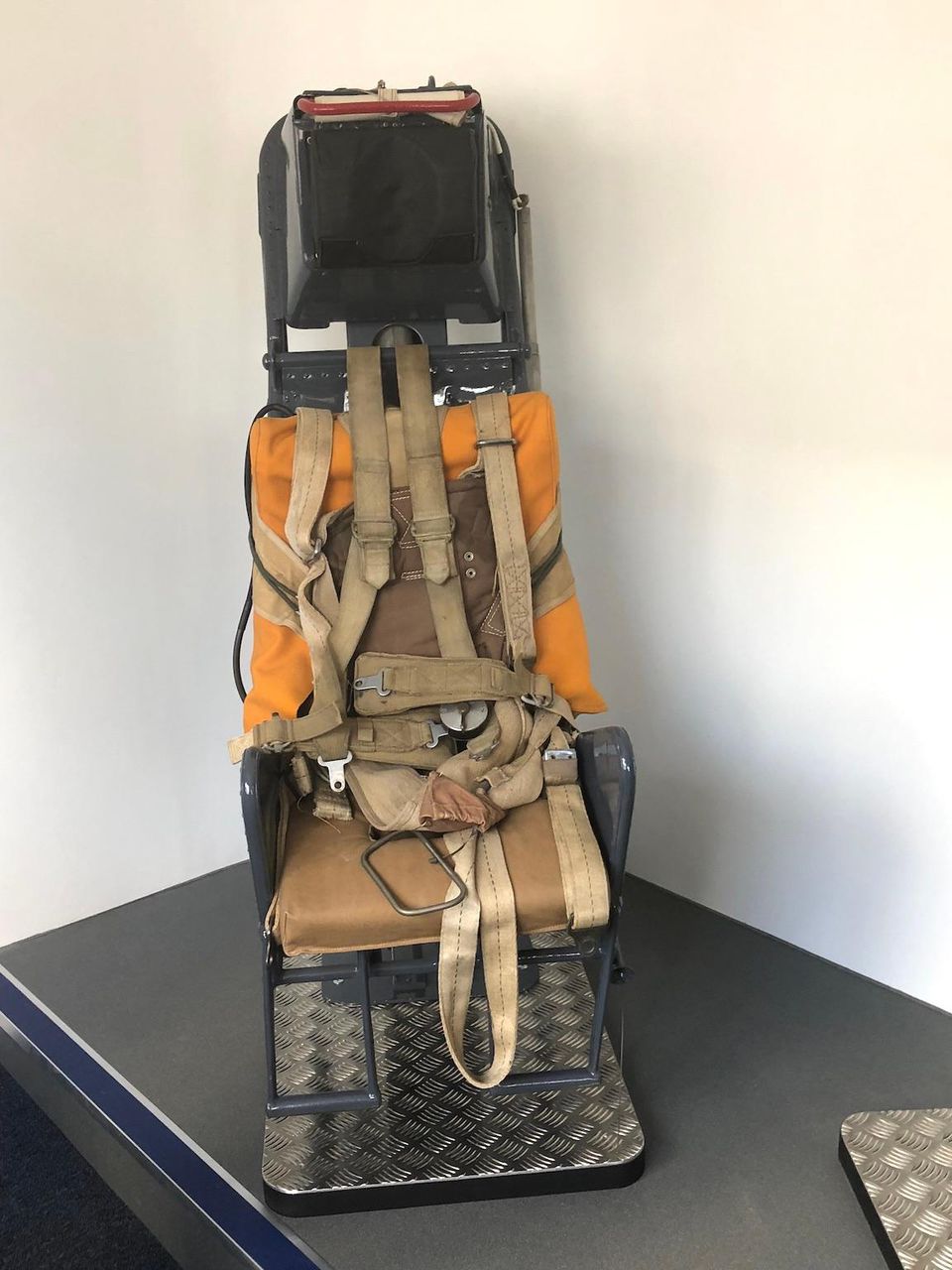 One of the first Martin-Baker ejection seats. Photo: R. Naas

In fact, the watches actually go up on the wrist of the pilots testing the ejection seats, and eject with the pilot. Martin, who owns one of the first MB watches that was tested, ejecting 16 times and is still working, says that if a watch brand were to try to emulate the testing, it would easily cost about 12 million British pounds.

“An ejection seat is primarily a hot gas system, powered by hot gas that is created by cartridges going off,” explains Martin. “The hot air powers the system so it is all mechanical. There are some electrical components as well, but the genesis, the backbone is a gas-powered system that is completely independent of any other system on the plane. This way, no matter what goes wrong, when everything else is broken, the glass is broken, the plane is on fire, the only thing that absolutely has to work is the ejection seat. When you pull the handle, it sets off a sequence that blasts the canopy, shatters the glass and the seat flies through it. Essentially it is one second from handle to parachute.” 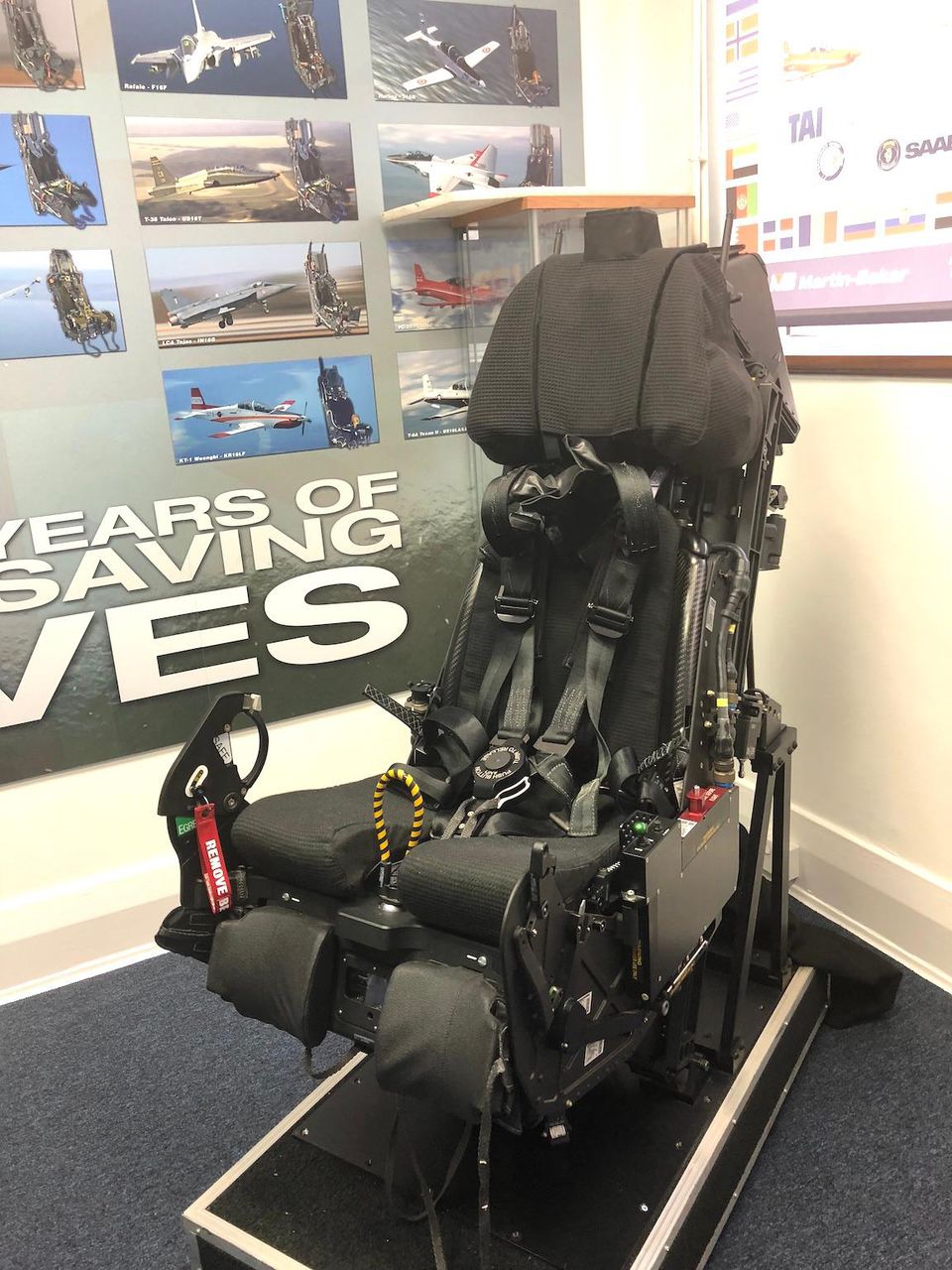 To date, as of the publication of this article, the Martin-Baker ejection seat has saved 7,603 aircrew lives for more than 93 Air Forces. A Martin-Baker ejection seat ahs between 2,500 and 3,000 parts and takes days upon days to build, with the final assembly coming together in the Martin-Baker facility nearby Henley-On-Thames. Each chair is custom made for the aircraft and some have unique qualifications. Similarly, the Bremont MB1 watches are all individually built by hand over the course of several weeks to a month. 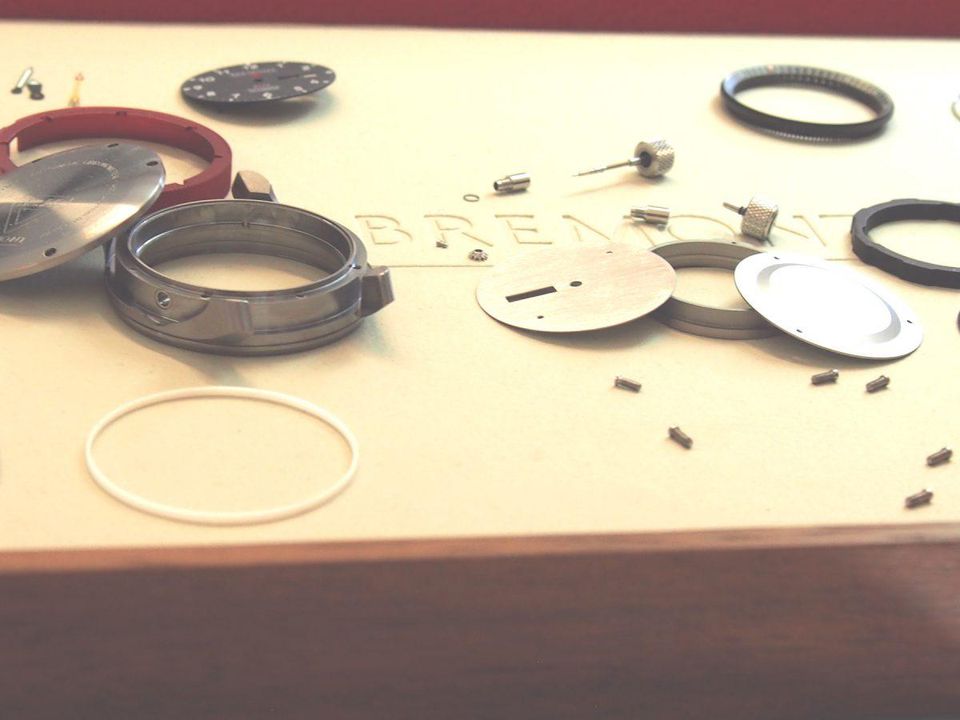 Just some of the components that go into the making of the Bremont MB1 watch.

“There is a symbolic connection between the mechanical watch and the mechanical ejection seat, where milliseconds count, where things are beating and working in unison,” says Martin. “Not many people saw that, but Bremont did.” 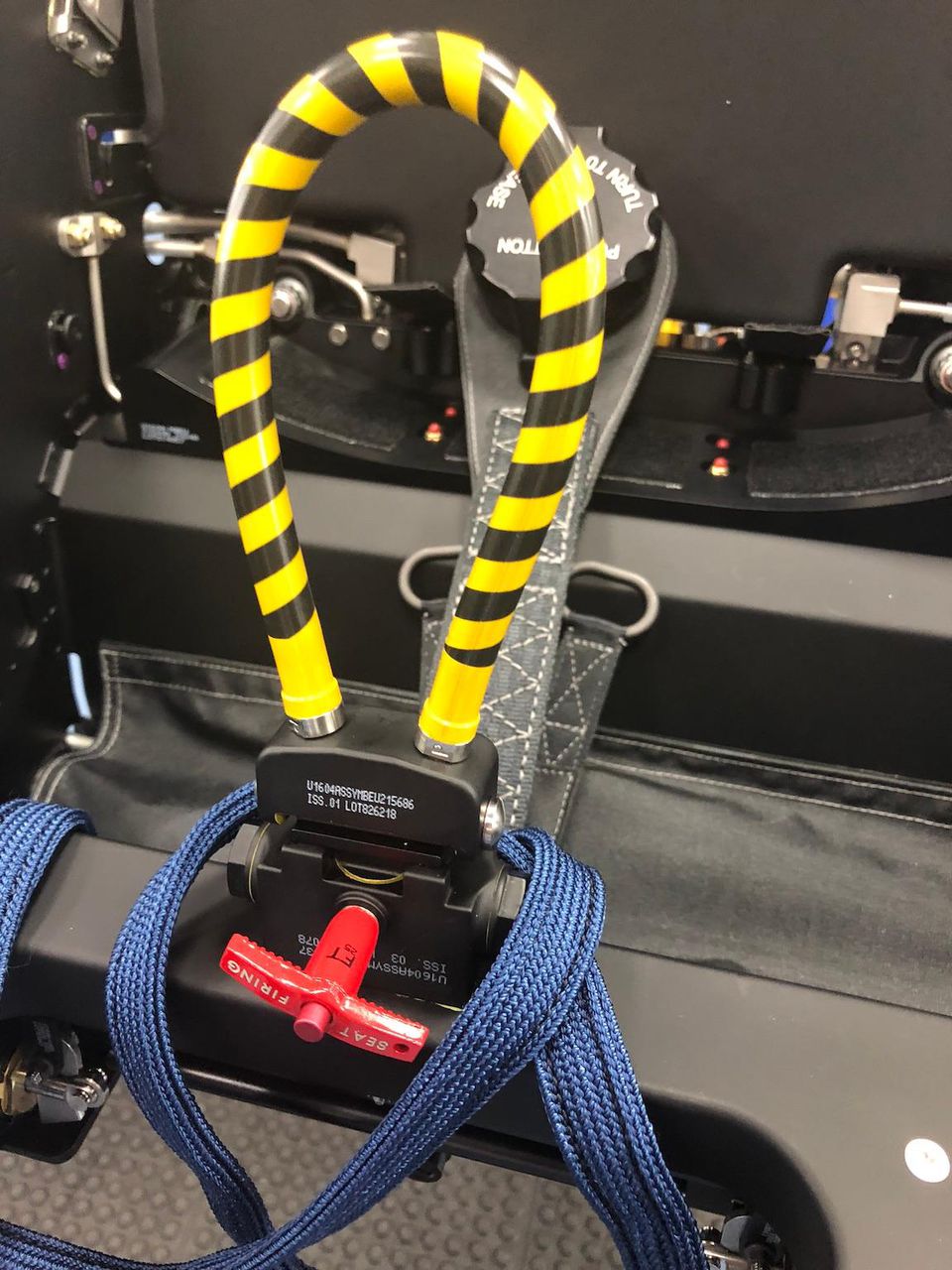 Aside from testing of the watches, they have a lot of Martin-Baker DNA in their looks, as well. The stitching on the straps is derived from the stitching on the seats, the Velcro on the sports strap, and even the materials and colors (green and red) come from the seats. “It has been a truly collaborative effort,” says Martin. “We have 17,000 seats in service in 92 air forces and 52 different aircraft types, this is what makes us strong and I wanted the watches to really reflect Martin-Baker in every way.” 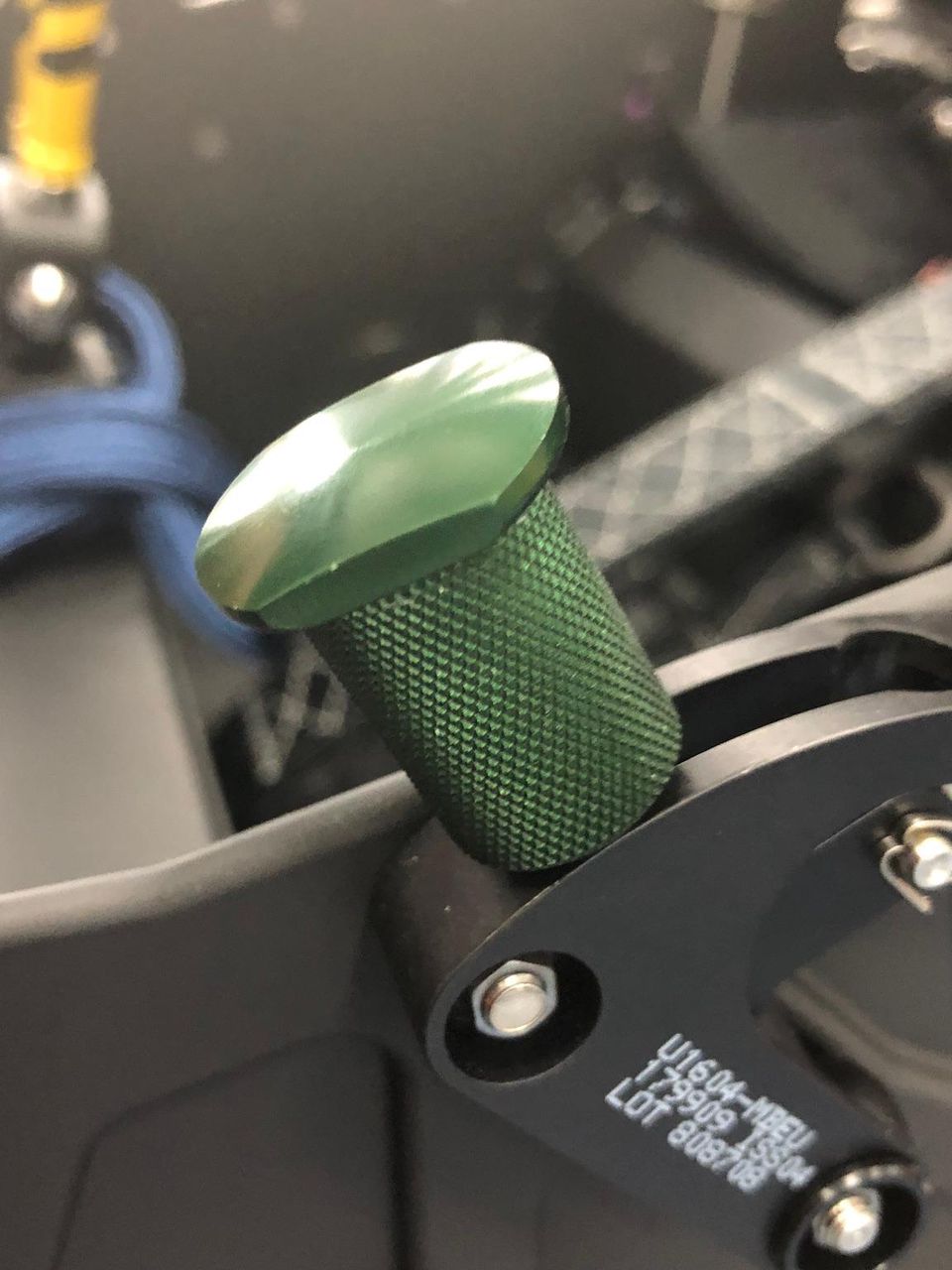 The Evolution of the Bremont MB Watches

In 2009, the very first Bremont MBI was born. True to Andrew Martin’s wishes, the MBI is sold only to pilots who have ejected from an aircraft in a Martin-Baker seat. Documentation is required to purchase the watch. Bremont has since, with Martin-Baker’s stamp of approval, created the MBII and MBIII watches that house the same revolutionary technology and are available for sale to the public at large. The MBI is distinctive thanks to its red case barrel and yellow seconds hand, and  there is an engraving on the caseback with the date of ejection. Because of this it is easily distinguishable from the newer MBII and MBIII, event though  they all house teh same self-winding chronometer movement. 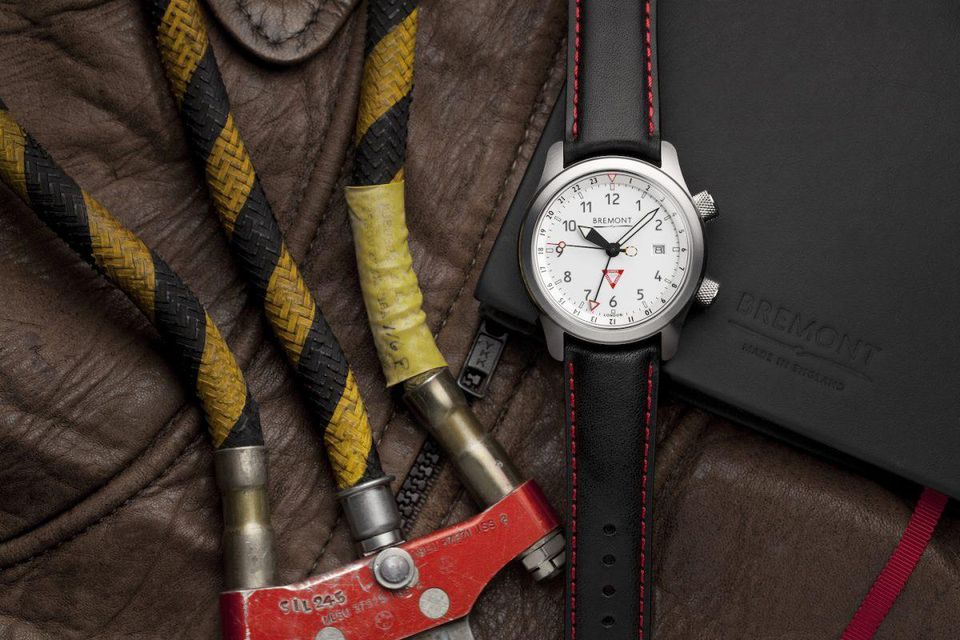 To celebrate 10 years, Bremont unveils the Bremont MBIII / 10th anniversary GMT chronometer. Just 310 pieces will be made of the watch with a white dial. The watch has a GMT that is operated via an inner Roto-Click® bezel that uses a series of ball bearings. The white dial has the ejection danger triangle logo on it at 6:00, and the case back is etched with an MK16 seat from an F-35 fighter jet. IT is crafted in stainless steel and measure 43mm in diameter. It features iconic Martin-Baker design features such as the yellow-and-black loop at the end of the second hand (recalling the ejection seat pull handle). Additionally the BE 93-sAV mechanical movement is chronometer rated.

“It is so hard to believe that 10 years have already passed since we started working together and released the fist MB watch,” says Nick English. “I have nothing but complete awe for Martin-Baker and what it has accomplished. I look forward to the next 10 years of working with this impressive engineering company.”

NOTE: This article by Roberta Naas first appeared on her Perfect Timing column on Forbes.com