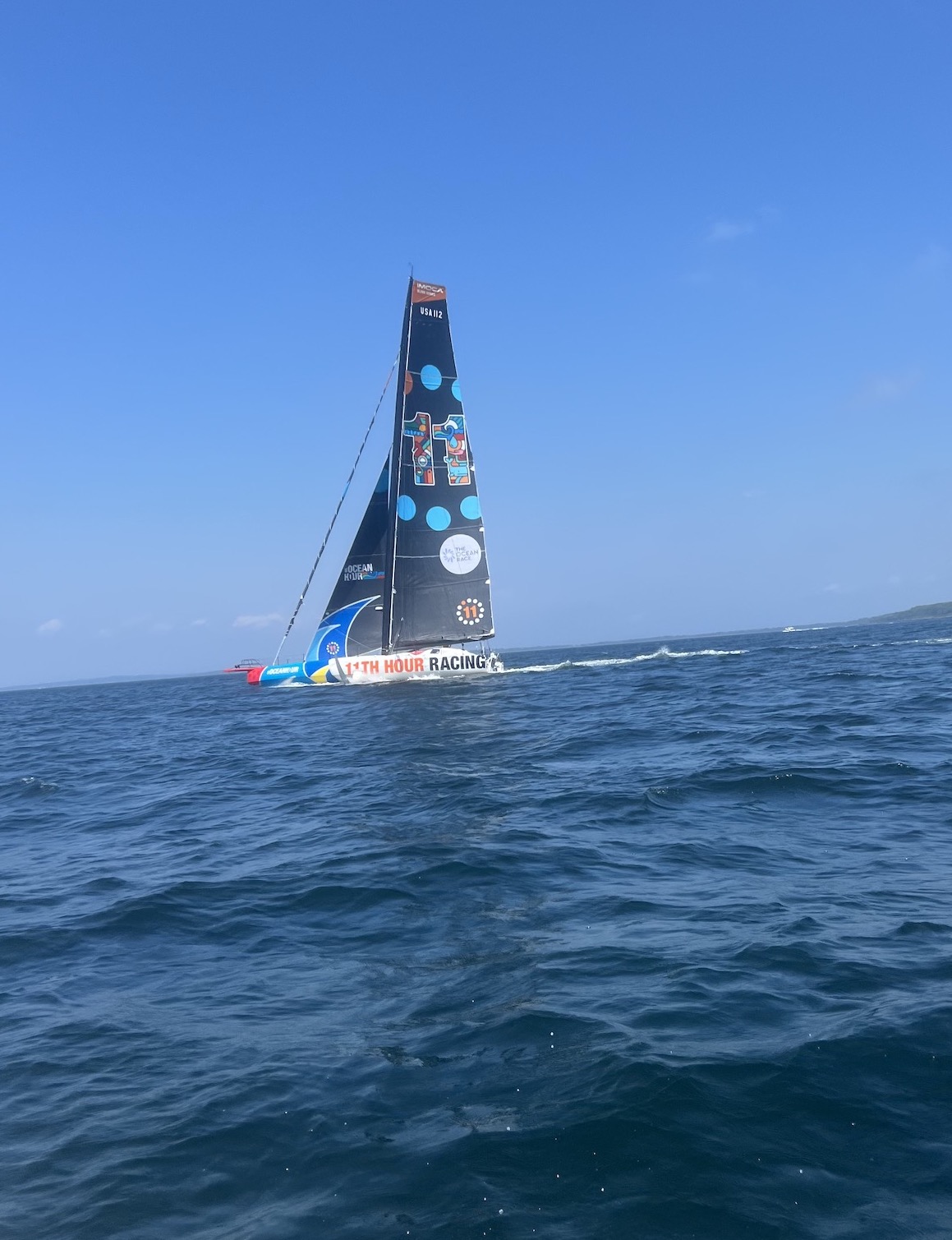 When I was invited by Swiss watch brand Ulysse Nardin to join them on an adventure in Newport, RI, I jumped at the chance. I have traveled with this brand before and the events always prove to be enlightening, engaging and educational. Last week’s experience — which included a seaplane trip from New York to Newport — did not disappoint.  I was one of a little more than a handful of select USA journalists who got  to join Ulysse Nardin (and #flyBlade for the seaplane journeys) for a once-in-a-lifetime experience aboard an IMOCA 60 racing yacht. The occasion: Ulysse Nardin, with a rich history in marine chronometer watches and a staunch supporter of protecting our oceans, announced its role as Official Timekeeper for 11th Hour Racing Team as it readies itself for the World Ocean Race 2022-23. That race, which officially begins in January 2023, takes an incredible seven months to complete, with crews going around the world in some of the harshest sea environs on Earth. 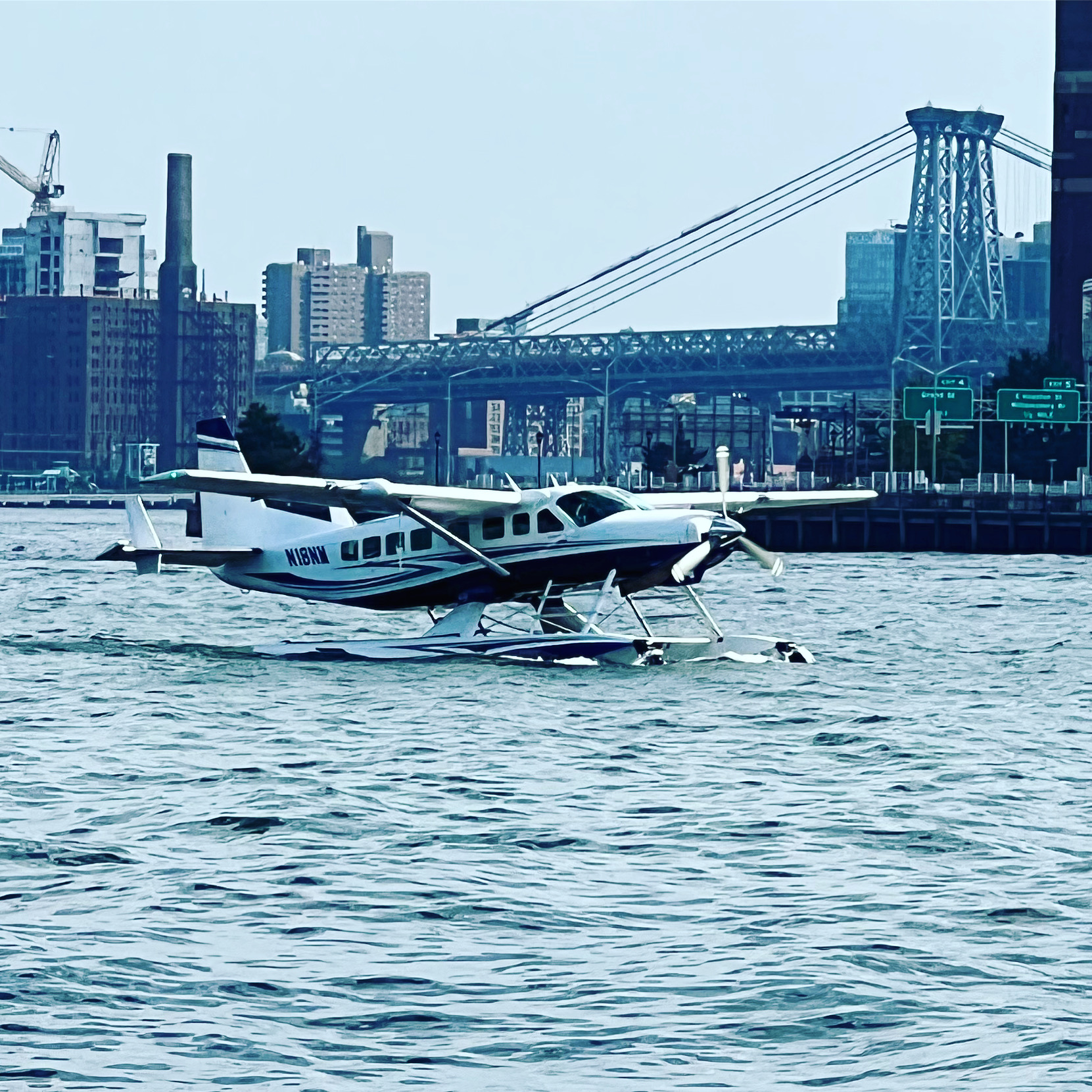 Together, eight of us (journalists, videographers and Ulysse Nardin’s US President Francois-Xavier Hotier) boarded the sea plane and took off from the East River – taking in the magnificent skyline and the ocean below us. Unfortunately, a very dense and low-to-the-water cloud cover prevented us from being able to do a water landing in Newport (we did water land later in the day back in the East River), but that didn’t matter much since we got to land in an exclusive civil-military airport on Quonset Point adjacent to Narragansett Bay (Quonset State Airport). As we landed we watched a team of military personnel unloading a helicopter from a C5M transport plane – another thing you don’t see every day. 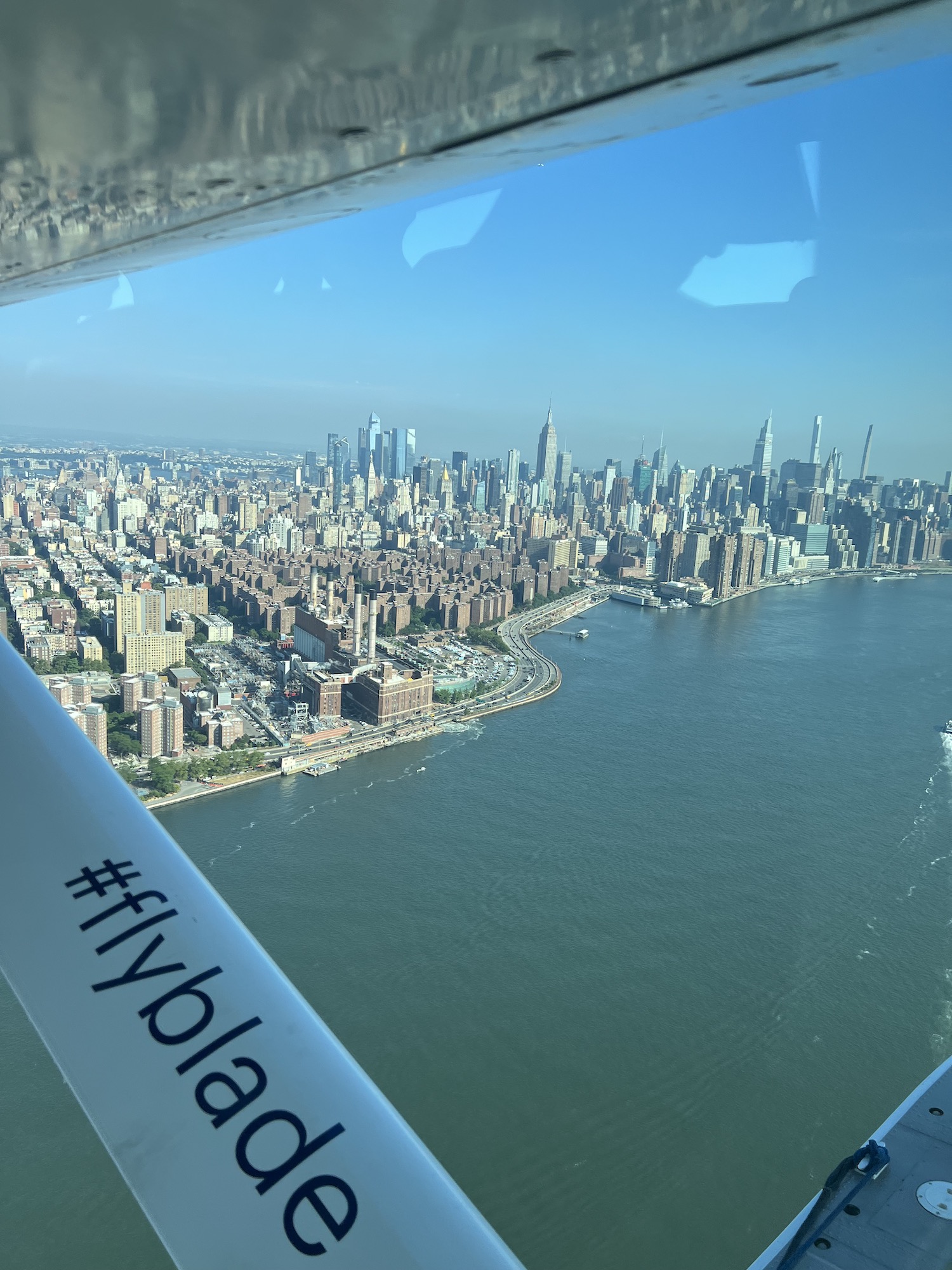 View from the Blade Seaplane as we left New York. (Photo: @R. Naas)

Once deplaned, we were quickly whisked away to Gurneys Resort for a press briefing about the then top-secret Ulysse Nardin sponsorship of 11th Hour Racing Team that was announced the following week.  After donning serious impact-inflating life vests, we climbed onto a RIF boat that would take us racing across the water to the official 11th Hour Racing Team boat, which is more like a rocket that a boat. As we bounced up and down on the water in the RIF, I wondered what it would be like to get onto an IMOCA Class boat —a 60-foot high-performance monohull boat built expressly for around-the-world racing. 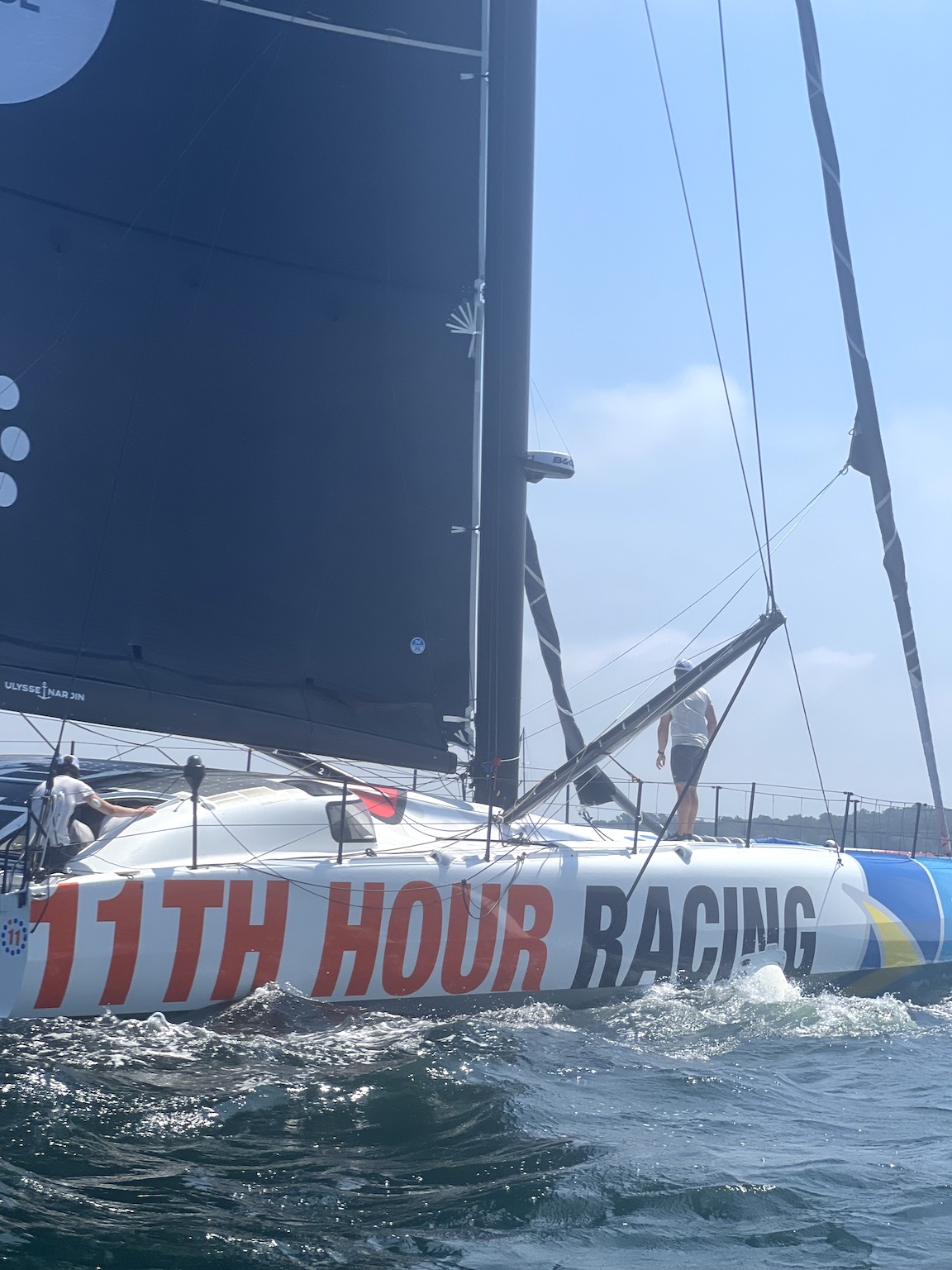 Getting ready to board the 11th Hour Racing Team’s IMOCA 60 yacht with Ulysse Nardin in Naragansett Bay. (Photo: R. Naas)

The next-generation IMOCA Class race yacht, named Malama, was only recently built by  title sponsor 11th Hour Racing  – just in time for The Ocean Race 2022-23 season. Sustainability is at the core of all operations. The boat is made predominantly using sustainable materials, as time is ticking when it comes to ocean pollution. The sailing team, along with title sponsor 11th Hour Racing Organization, looks to inspire coastal communities around the world to create change in ocean health. The sailing team, with both men and women sailors, was formed three years ago and is led by American offshore sailors Charlie Enright and Mark Towill. In total, the boat will be crewed during The Ocean Race by just five individuals at a time. 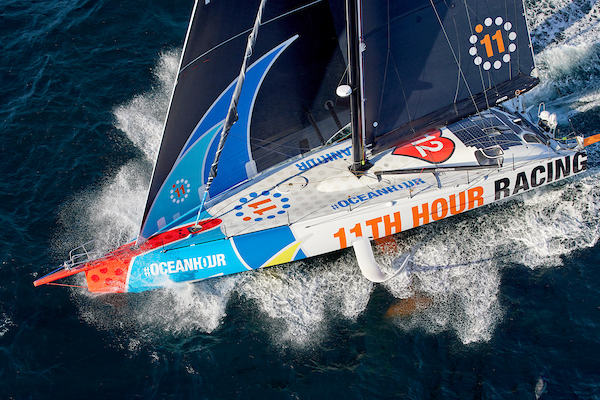 11th Hour Racing Team deliver their two IMOCA 60s to Le Havre, France ahead of the start of the 2021 Transat Jacques Vabre. The Team has entered the race with two boats. Malama, recently launched in August 2021 will be co-skippered by Charlie Enright and Pascal Bidégorry and Alaka’i will be co-skippered by Justine Mettraux and Simon Fisher.
Photo by Thierry Martinez / 11th Hour Racing

As we came upon the IMOCA 60 (also known as an Open 60 foot boat), it seemed majestic on the water with beautiful blue sails rising tall into the sky, and white and orange foils that reach up and out of the water. The colorful design of the racing yacht alone is inspiring. But heading down into that monohull – where all of the racing operations take place – was truly an enlightening experience.

Top-of-the-line data information is key when racing around the world, and state-of-the-art informational screens abounded. Additionally in that very small space, the equipment takes center stage and one wonders how four people operate in such close quarters under intense and sometimes grueling circumstances. Maybe 10 feet into the hull is another small space where the crew takes turns sleeping just 2-3 hours at a time on beanbag beds held in place by nothing more than high-tech sustainable fabric dividers. That smaller, fairly dark space also serves as the kitchen, where the crew subsists on freeze-dried and powdered “meals.” 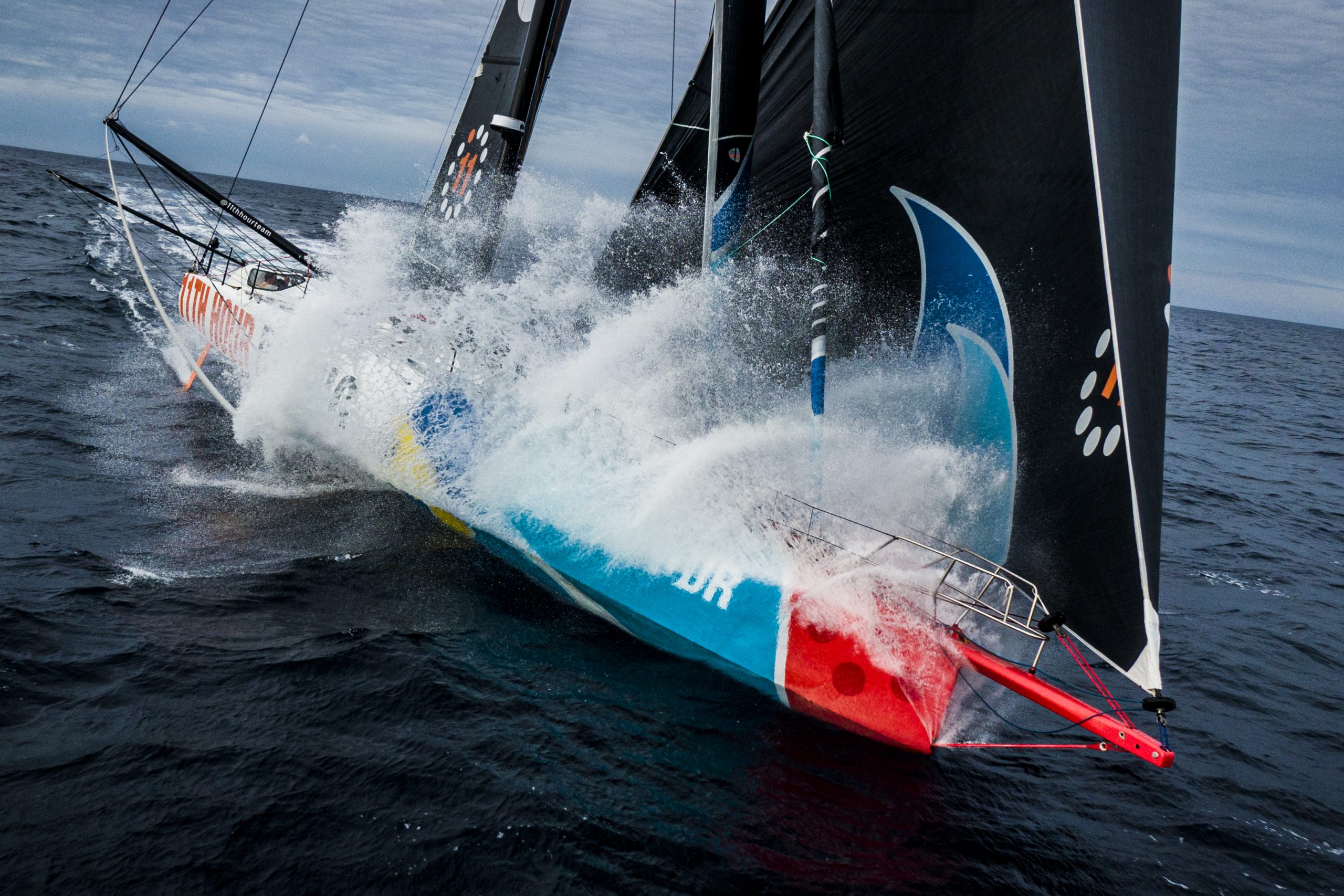 In that tiny hull, we watched as sailors demonstrated their skills and as the ocean seemed to engulf the racing boat with waves splashing over us that would’ve surely knocked us right off the boat had we not been in the protection of that small space. As we raced along, that hull essentially  came to life with electronic equipment flashing, and ropes and rigs  being pulled, pushed and moved to change the sail direction above us.

The experience was a true adventure, and I have a new appreciation not just for racing and these rocket-like sail boats, but more importantly for the crew that tirelessly works day after day as they muster all their strength, willpower and determination for a dream of winning what is billed as the world’s longest sporting event. 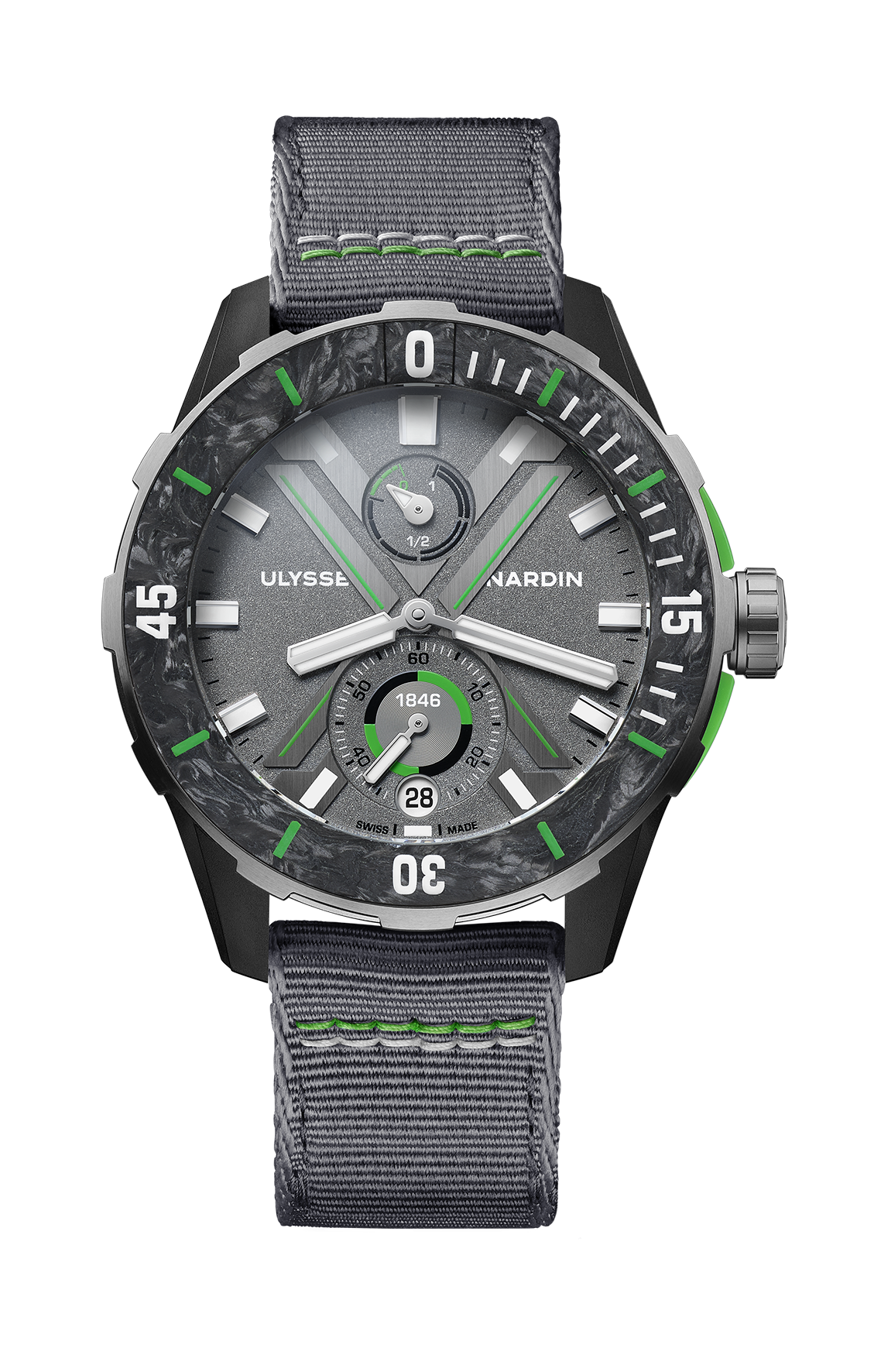 Every move the 11th Hour Racing Team makes is determined and precise. In fact, the entire race is about performance, timing and excellence. That is probably why the fit with Ulysse Nardin is so perfect. That and their shared commitment toward making a positive impact on ocean health.

In fact, the Ulysse Nardin Ocean Race Diver watch is a perfect example of its commitment. The watch is crafted using plastic fishing nets that have been recovered from the sea.  Created in partnership with The Ocean Race, the watch uses material from Fil &Fab, whose fishnet recycling business turns the nets into small polyamide granules that produce Nylo. Nylo, along with Carbonium (recycled steel from aircraft whose manufacture has a 40 percent lower environmental impact that regular steel), serves as the  case of the watch. In addition to the upcycled case, the watch boasts the R-Strap made of recycled fishing nets, too, that were transformed into yarn reels. Water resistant to 300 meters, the watch houses a mechanical movement wherein some of the components are made from recycled steel and brass.  It retails for $11,500 and is sold in a dry bag made by Helly Hansen, the official clothing supplier for the round-the-world Ocean Race. 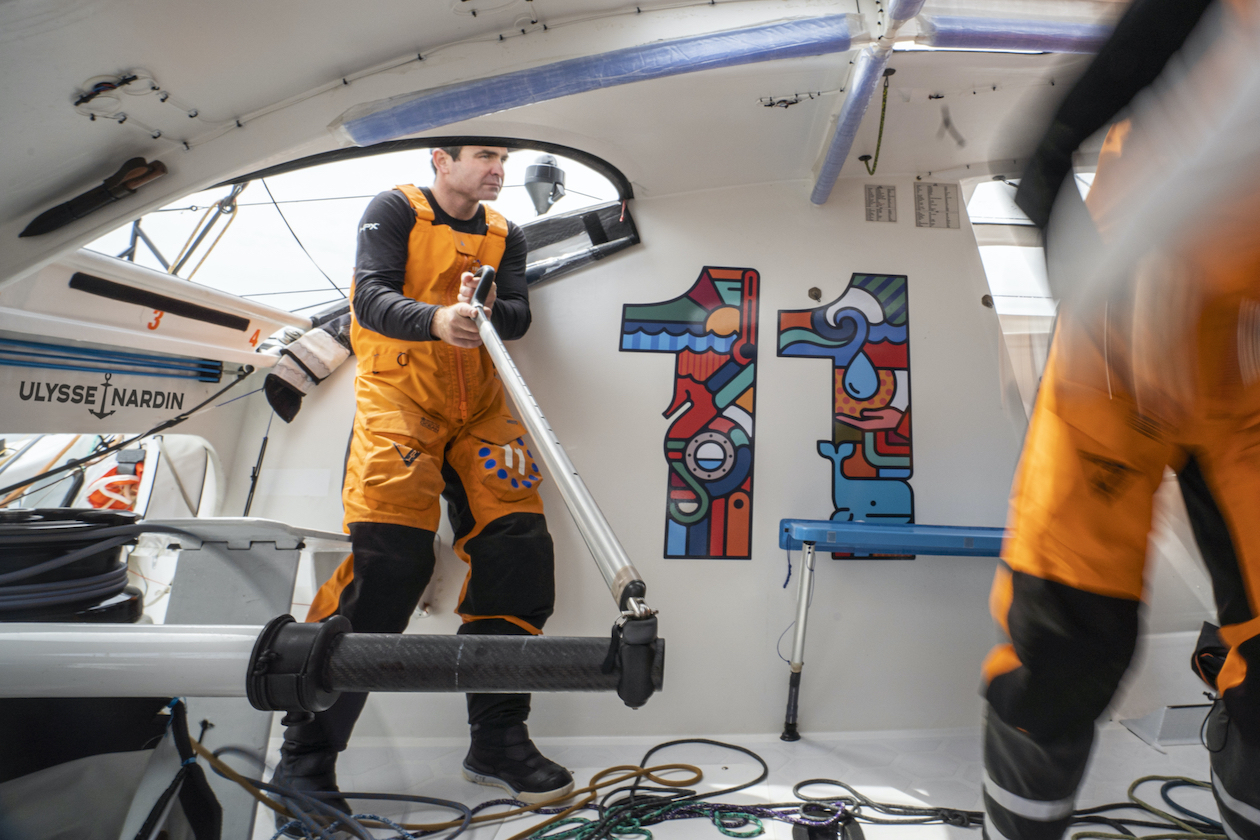 (Portions of this article by Roberta Naas first appeared on WorldTempus.com).