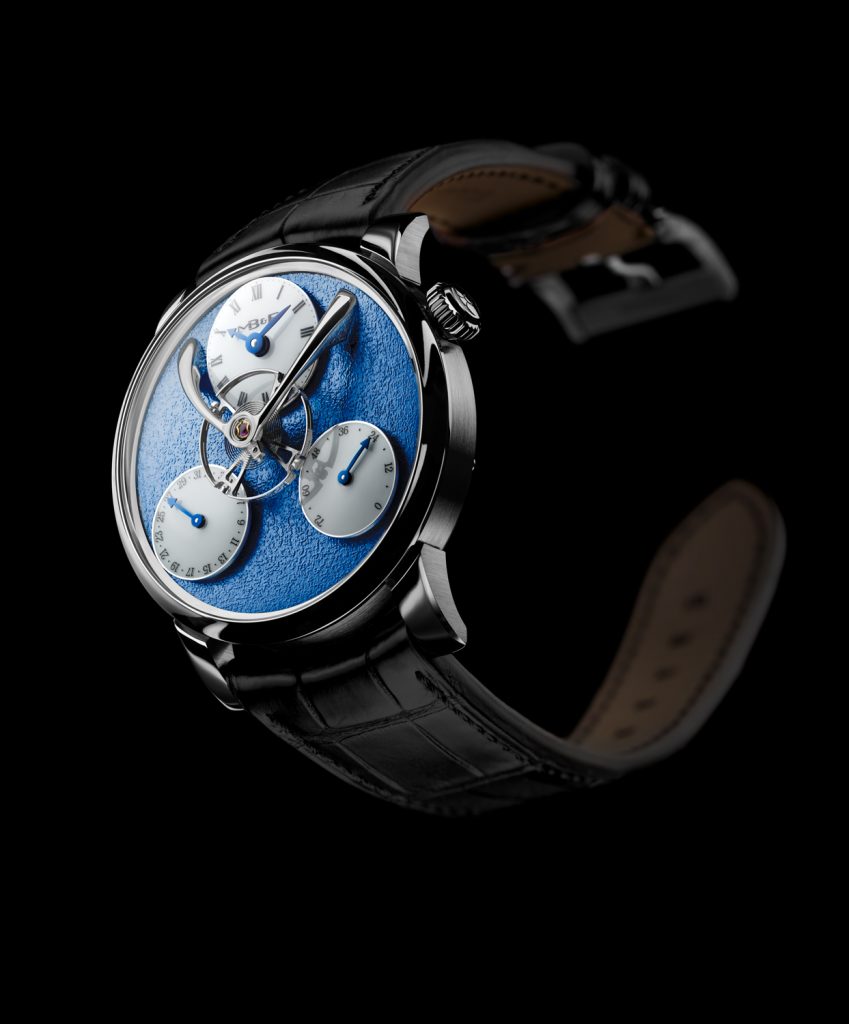 Today, MB&F unveiled the newest Legacy Machine, the  Split Escapement (LM SE) watch.  We will be taking a much closer look at this watch this weekend, when we will have it on our wrists and we will bring you a video about it at that point in time. For now, we bring you a first look at the newest MB&F   LM SE.

As with all of the MB&F Legacy Machine watches, the key technical element is the suspended balance wheel that sits beneath the high domed sapphire crystal — visible above the dial.  In the new LM SE, that balance wheel remains suspended just below the highest point of the domed crystal, but this balance has the appearance of oscillating on its own because MB&F has relocated the driving impulse, anchor and escape wheel to the opposite side of the movement, concealing it from view. With this reconfigured design, comes the name Split Escapement. 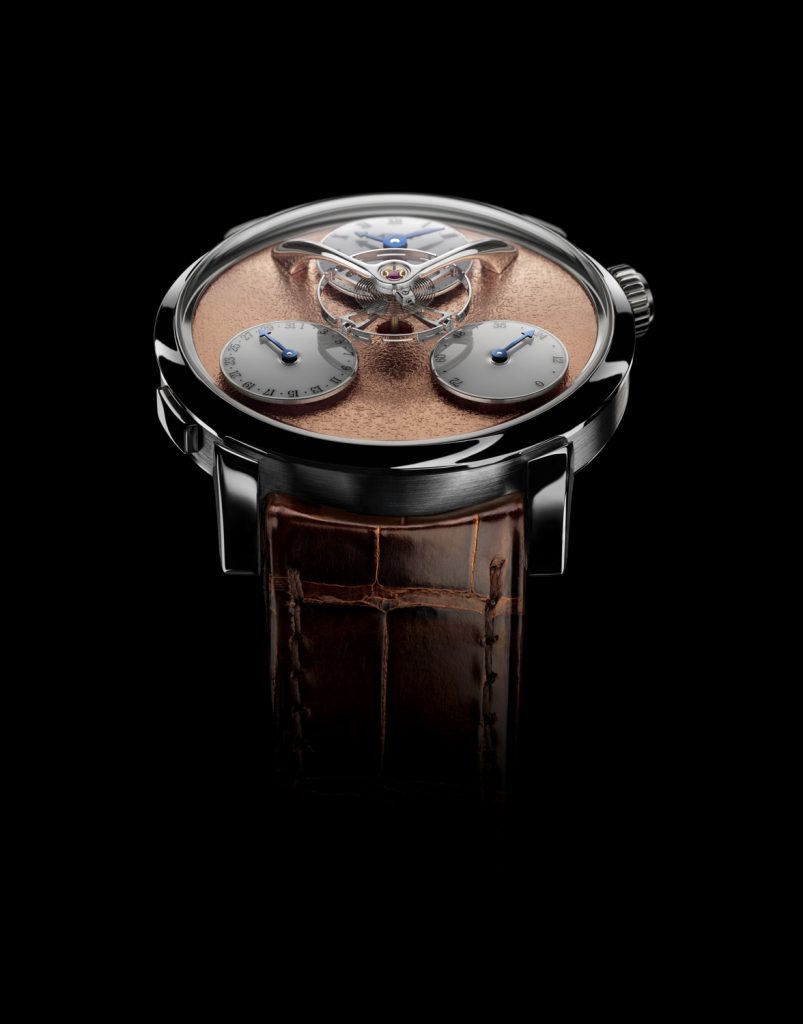 Four different versions of the MB&F Legacy Machine Split Escapement (LM SE) watch are being made.

By transporting the impulse, anchor and escape wheel to the opposite side and hiding it from visibility, MB&F heightens the visual impact of the suspended balance,. The concept is  derived from the Legacy Machine Perpetual, the first MB&F watch to use a split escapement. Now, the LM SE brings the full concept of that split of the balance and impulse, anchor and escapement, into focus.

Of course there were a number of challenges inherent in this split of the escapement — including the concept of how to separate the components that allow the stored energy of the mainspring to deliver regular controlled impulses instead of totally unwinding at once. To move the impulse jewel, anchor and escape wheel so they are now visible via the case back, MB&F had to develop  an unusually long balance arbor that runs through the center of the movement and projects through the dial to support the oscillator. This accomplishment is a feat of micro-mechanical mastery and technical prowess. 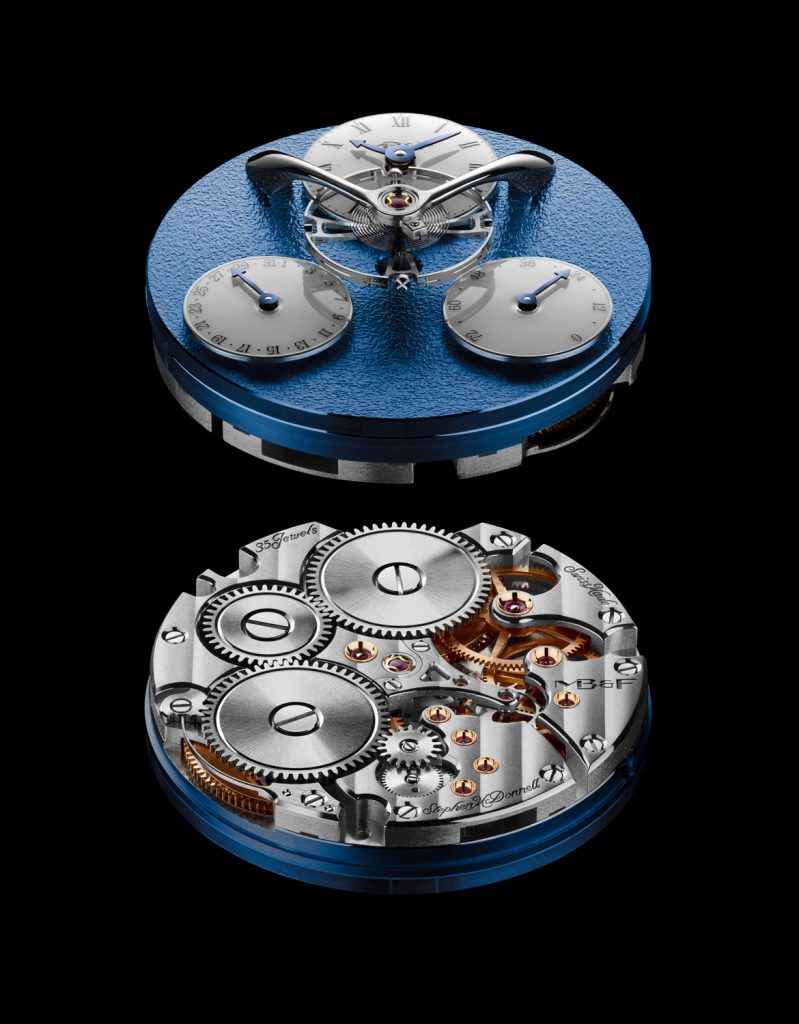 Splitting the escapement for the MB&F LM SE watch, and placing components on different sides of the engine, required extreme technical prowess and an extra long arbour.

A longer balance arbor  — in this case 11.78mm in length — naturally has a higher mass, which could impact the energy being transmitted to the oscillator. However, MB&F engineers found the perfect blend of rigidity and inertia to ensure chronometric integrity. They fitted both ends of the balance arbor with anti-shock jewel bearings, and separately fixed the bridge that holds the anchor and escape wheel, for fine adjustment. Finally, they  equipped the LM SE engine with two barrels, enabling 72 hours of continuous power. 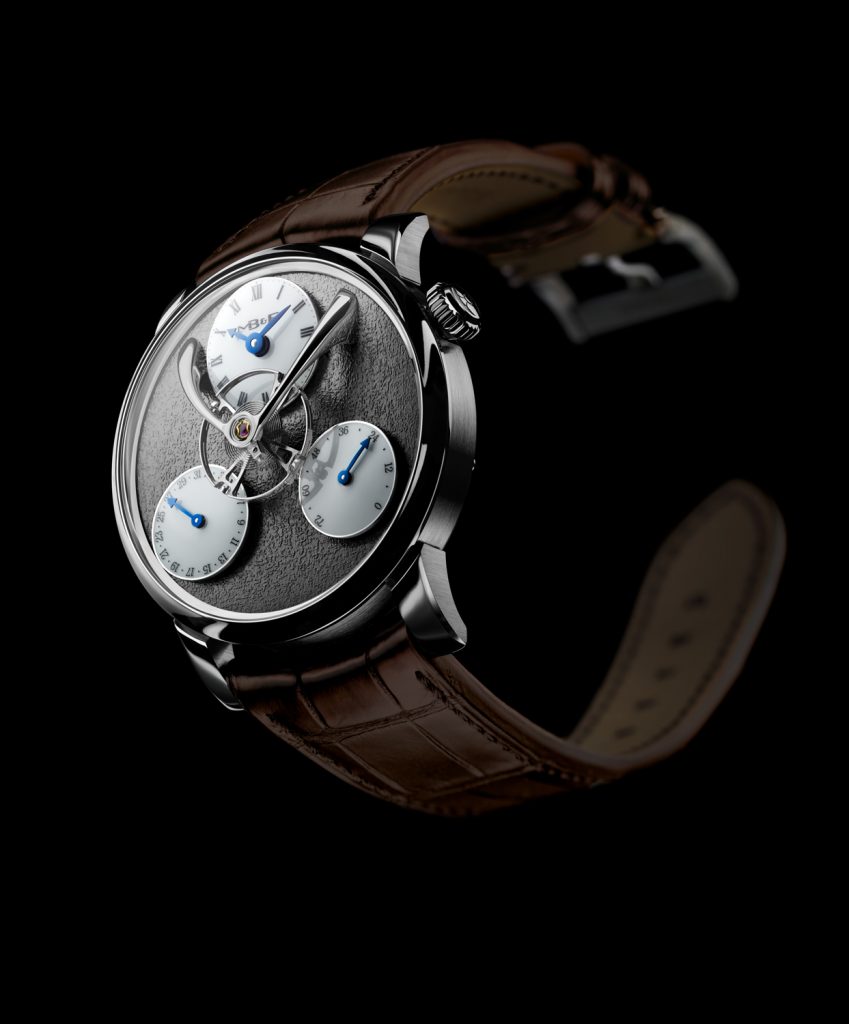 The Frosted technique for the “dial” plate of the MB&F LM SE is done by hand with a wire brush.

While the suspended balance of the Split Escapement draws the eye in, let’s not forget that the watch does have a function: indicating time.  On this watch, time is indicated via three white sundials, one each  at 12:00 (time),  8:00 (date), and 4:00 for power reserve indication.

Other design features inspired by previous Legacy Machines include the arched balance bridge found in the LM Perpetual, a highly distinctive micro-textured “frosted” finish that was first presented in the LM 101 ‘Frost’ editions.  The frosted finish inspired by antique pocket watches is achieved by manually burnishing the metal surface with a wire brush section by section  — a time consuming technique.  The surfaces were then PVD treated in order to attain different hues. 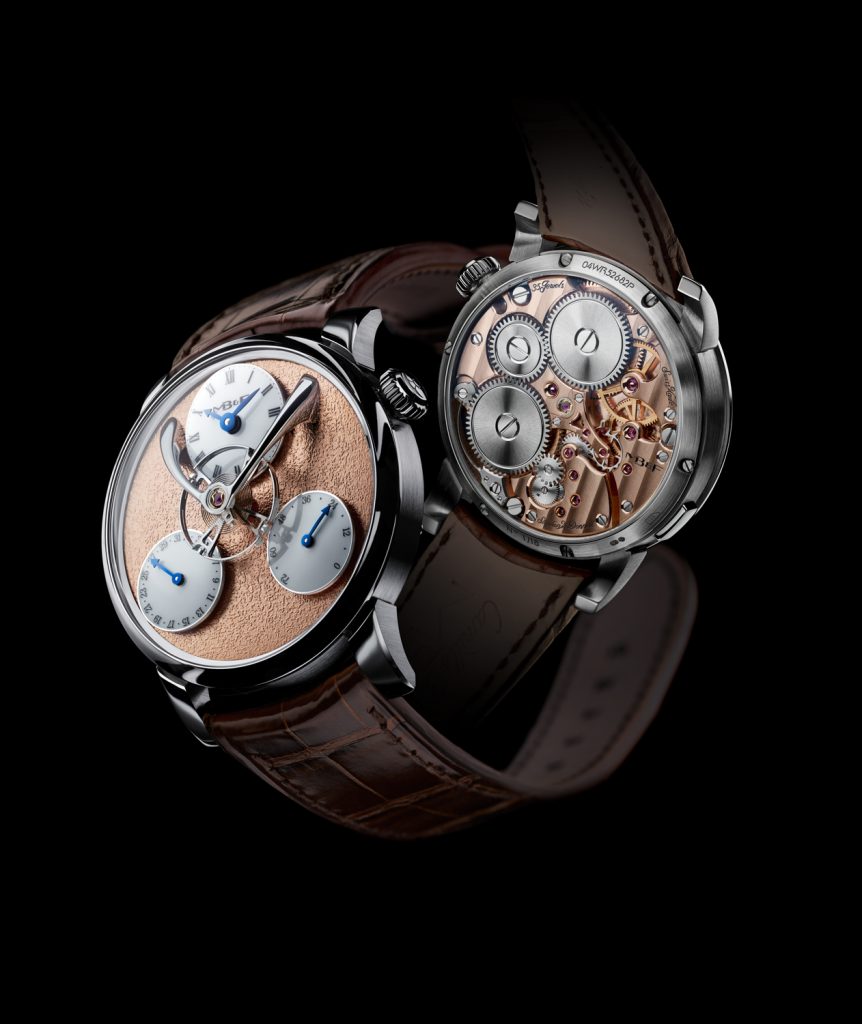 Split escapement with the balance wheel suspended above the dial and the anchor under the movement.

Push-button next to the date dial for quick adjustment of the date.

Sapphire crystals on top and display back treated with anti-reflective coating on both faces.