Ok — we admit it — this watch is going to rock your socks off.  Just in time for the holidays,  Corum unveils what may well be its most scintillating watch to date.  While I might venture to guess this new Corum Golden Bridge Miss Sapphires watch is for women only,  I know a particular Middle-Eastern collector who won’t be able to resist the blue beauty. Nevertheless, the one-of-a-kind piece deftly blends the technology and fine  craftsmanship that is indicative of the famed Golden Bridge watch  with artistic elegance and incredible master gem setting.

The Corum Golden Bridge Miss Sapphires watch is a unique piece retailing for $680,000.

For those who  may not be familiar with the Golden Bridge — could anyone not be familiar with it? — we just want to recall that the first ever Golden Bridge was unveiled to the world in 1980. It housed a linear movement that had been designed by master watchmaker Vincent Calabrese. Calabrese’s movement won awards and caught the eye of the then-owner of Corum Jean-Renee Bannwart — who swiftly met with Calabrese and struck a deal to use the linear caliber.  The Golden Bridge has remained an icon in the watchmaking world thanks to its linear movement and exceptional innovation. Over the years, Corum has regularly unveiled new and daring iterations, but the Golden Bridge Sapphires may just top them all.

As to the  linear movement, caliber CO113, it is hand-wound movement with 40 hours of power reserve. The sapphire crystal and caseback are both  anti reflective,  and the watch is water resistant to 30 meters. Really? I  just could never bring myself to wear this watch in the water — unless I was running away with it, which i would have to do because I can’t afford the justified price of $680,000. 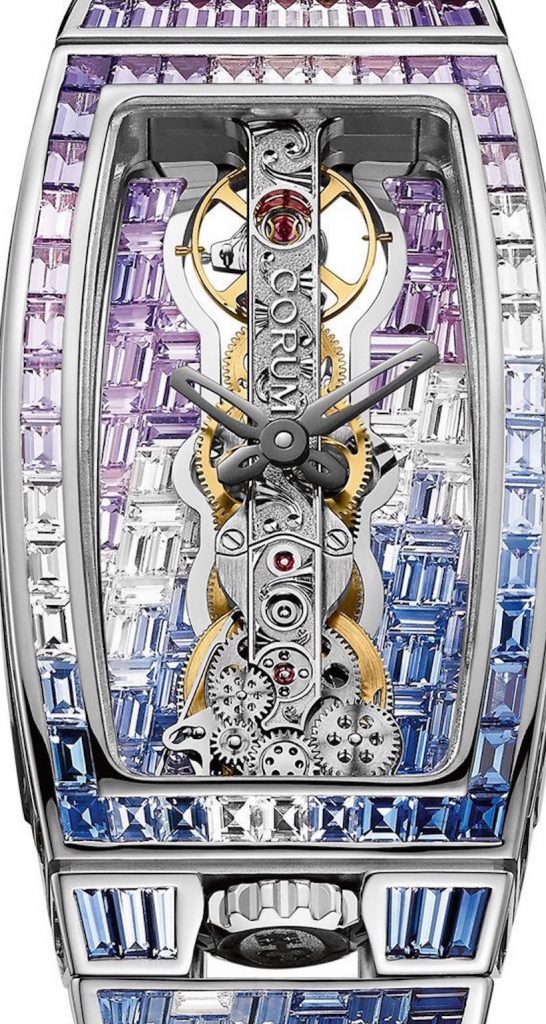