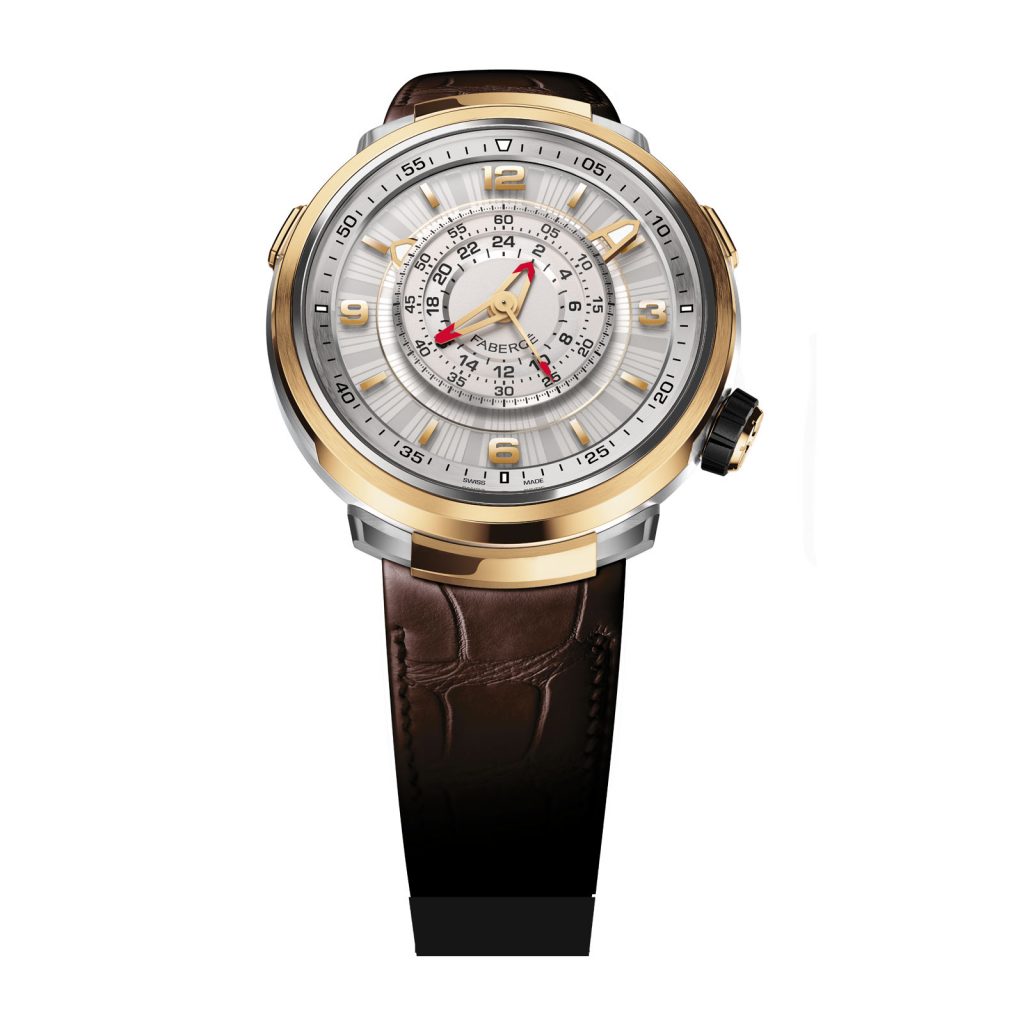 It’s no secret that the House of Faberge has pulled out all the stops with its inventive timepieces – often turning to designers and master minds outside of the House for added technical mastery. In fact, since its revival on the scene, the brand regularly turns to he master mind Jean-Marc Wiederrecht of Agenhor to develop visionary new movements. Once again, the collaboration pays off big time, as we meet the Faberge Visionnaire Chronograph.

The movement of this extraordinary watch has been a concept and idling project for Wiederrecht for 10 years — with the past three years being instrumental in its development.The key to the watch — like the surprises found inside the Faberge eggs — lies in the center of the dial, where the chronograph resides. The AGH 6361 movement holds two patents: one for the AgenEmbr horizontal clutch system, and one for the AgenGraphe central chronograph module. 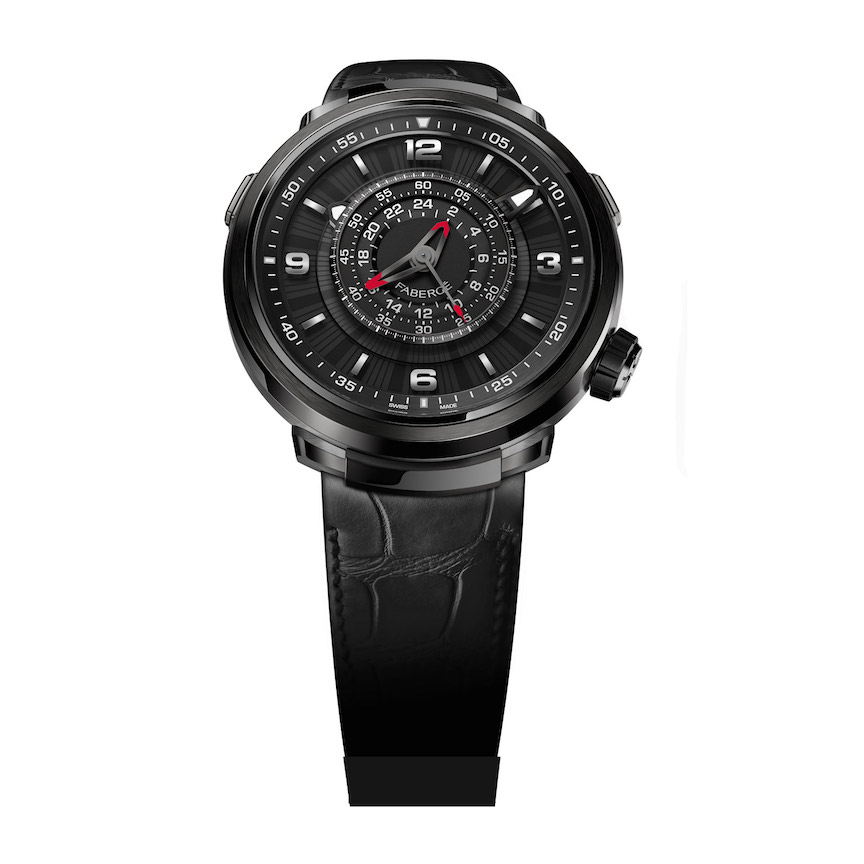 The Faberge Visionnaire Chronograph is a technical mastery made by Agenhor exclusively for Faberge.

The concept for this timepiece was to improve legibility of the chronograph counters, and to improve the amount of energy needed to power the counters. The AgenGraphe module deftly puts the hours, minutes and seconds counters at the center of the watch — all displayed from the same central axis. The running hours and minutes are displayed on the edge of the dial via hidden disks that resemble the Visionnaire DTZ watch. The chronograph, driven by a snail cam for the seconds, constantly accumulates the energy and transmits it layer by layer through the chronograph module. The system enables another ingenious technical feature: the instantaneous jump at the end of each hour of the minute and hour counters. In total, the watch offers 60 hours of power reserve, even if the chronograph is running.

As to the patented horizontal clutch, Agenhor has removed the teeth from the seconds wheels in oder to attain a horizontal structure. Typically, most chronographs feature vertical clutches (to temper the play between the teeth and the main seconds wheel when it engages with the chronograph seconds wheel), however Agenhor needed the horizontal clutch for the center positioning on the watch. Taking inspiration from — and, in fact, working with — the makers of the Swiss Army Knife, Agenhor developed a system similar to the nail file in a knife. Essentially the surface of the wheels are coated to form a somewhat abrasive surface to offer the necessary friction to engage the wheels properly. There is also a set of toothed wheels mounted on the same axes to act as an anti-shock system. The clutch pivots on its central axis via a spring with a counter-weighted platinum screw. 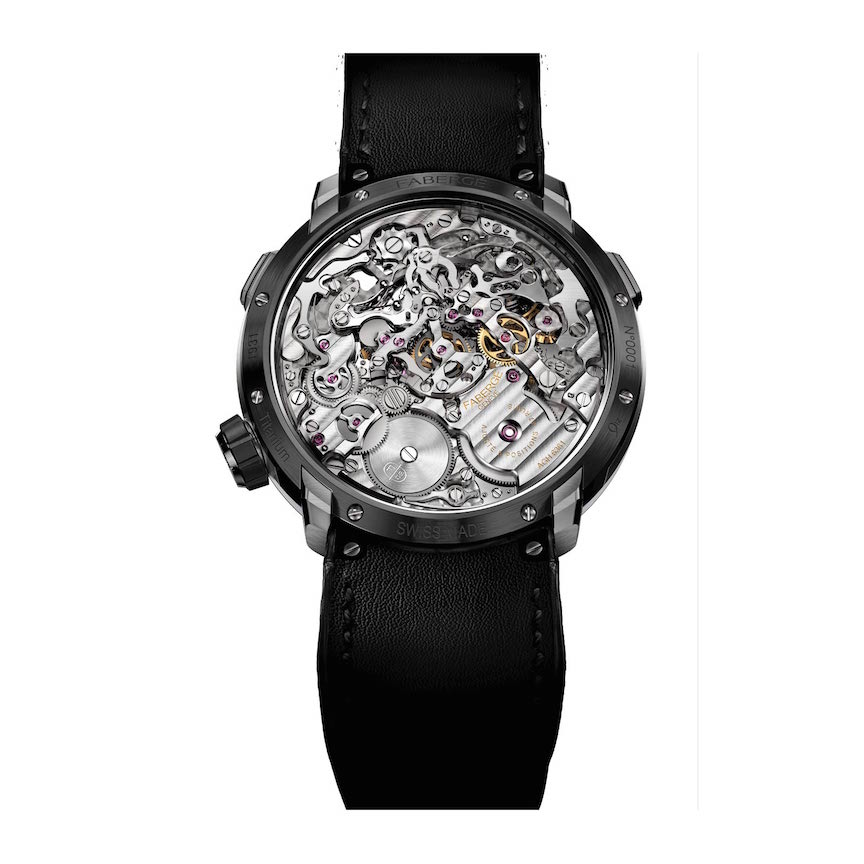 The entire chronograph runs from the center of the Faberge Visionnaire Chronograph watch, with a horizontal clutch system.

As if all of this was not enough, there is still more to this technical marvel, including a patented AgenPal bearing block (the bearing has no ball bearings in it), low-friction plates that slide thanks to a platinum weight beneath the winding rotor. There are several versions of the Faberge Visionnaire Chronograph, including one in 18-karat rose gold, and one in black DLC titanium with black ceramic.