Experiencing the Indy 500 with TAG Heuer, Patrick Dempsey and Marco and Mario Andretti 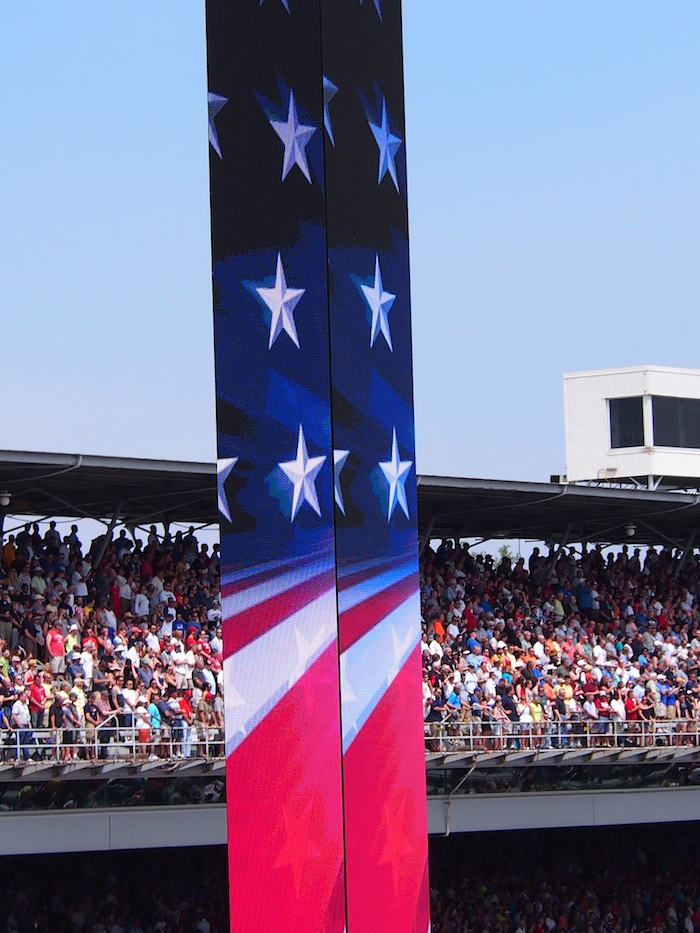 The Indy 500, on Memorial Day Weekend, is as American as it gets

It’s as American as it gets. It’s not baseball or apple pie, but it is the heartland of America: the Indy 500. It’s a funny thing but this weekend, ATimelyPerspective had been invited on a number of trips, including the Monaco Grand Prix (also with TAG Hewer). The Indy 500 was the one I knew I couldn’t miss. I’ve been a car lover since I was in ninth grade. It’s in my veins – almost as much as being a journalist is, or writing about watches is. Anyway, the Indy 500 – for those who love cars – is the place to be: the race capital of America. (Yes, I’ve also been to other Formula 1 races, Nascar races, the Monterey Motor Sports Reunion and vintage rallies around the world, but they don’t’ compare.) After all, the Indy race track has been going for 99 years… and the Indy 500 is all American racing at its finest. 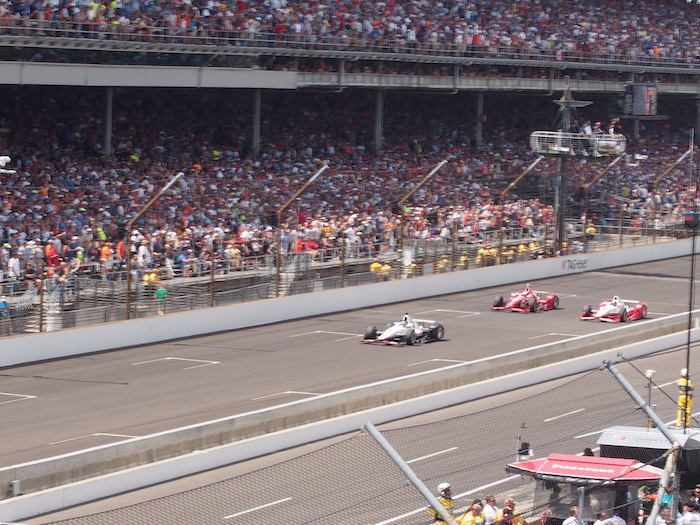 In the final laps, Montoya pulled out ahead for his second Indy 500 win (photo: R.Naas)

What may have been most superb about yesterday’s race – which got off to slow start thanks to an immediate caution – were the final few laps. Juan Pablo Montoya and Will Power were neck in neck to the finish – when Montoya, sped out ahead and took the win in the final lap. The exhilarating and exciting finish marks Montoya’s second Indy500 victory. While Scot Dixon also traded the top three spots intermittently with Power and Montoya, in the end, after Montoya, Power finished second, Charlie Kimball third and Dixon came in fourth.

The cars coming into the first turn

We were there at the races with TAG Heuer, a brand long associated with auto racing. TAG Heuer is the Official Timekeeper of the Indy 500, and the brand builds the watches that bear the race name. Also present at the event was Patrick Dempsey –formerly of Gray’s Anatomy, racecar driver in the WEC races and TAG Heuer brand ambassador. We got to spend some time with him, and will bring you that interview soon. But, meanwhile, back to the races. 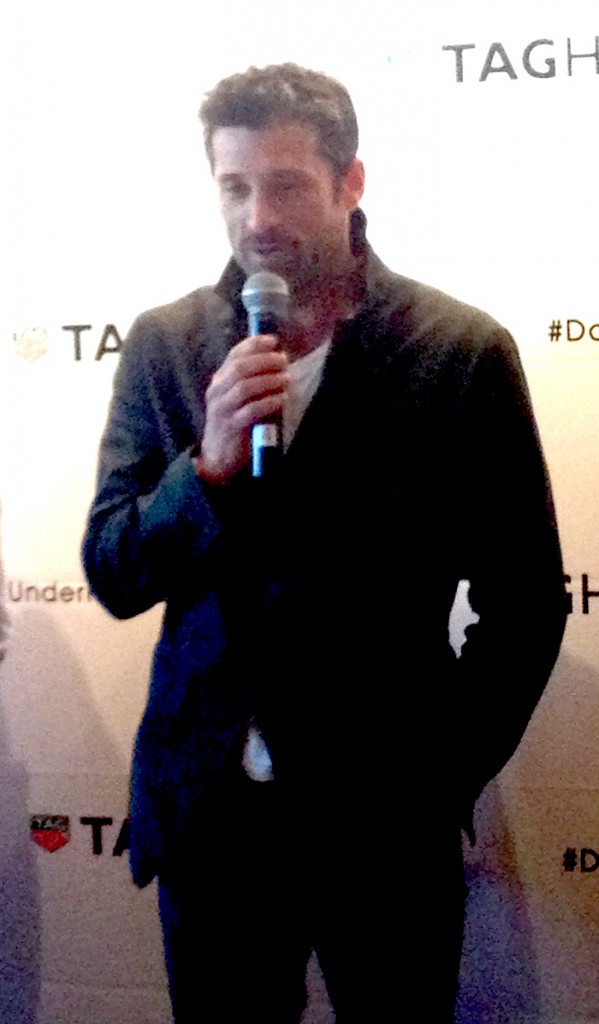 While the preliminary race days are filled with time trials, pit stops, garage visits and more, it is the race day itself that is bursting with the most excitement. The roar of the high-performance engines, the stacks and stacks of omnipresent, slicks the smell of rubber and raw power – this is what comprises Indy 500.

We had the opportunity to visit the garages and the pits. Here, all the magic happens. Yes, the drivers bring it all to the finish line, but it is the high-tech instrumentation in the garages that measures everything to the most minute numbers, and the non-stop communication between driver and team about the handling of the car and track that really makes racing a team sport and a collective heart beat. Indy 500 and its Indycars are much like a fine Swiss watch: precision, mechanics, stealth aesthetics, high-tech materials and a team – this is the synergy between auto racing and watch building 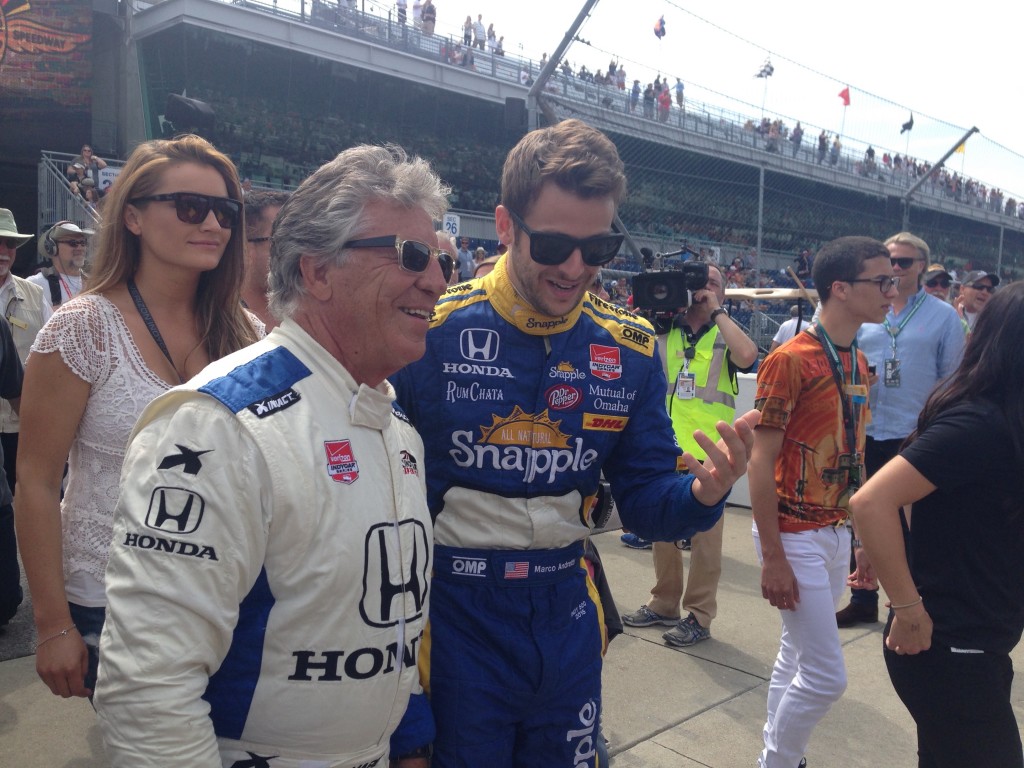 We also had the chance to spend some time on the track before the races. There, I had the wonderful opportunity to see Marco and Mario Andretti together as they walked out to Marco Andretti’s predominantly Snapple-sponsored car: generations bridging a gap with a singular passion. A host of other celebs were on the track as well, from David Letterman to Andrew Luck (Colts quarterback and singer Jordan Sparks), but to me, it was the racers who counted yesterday. 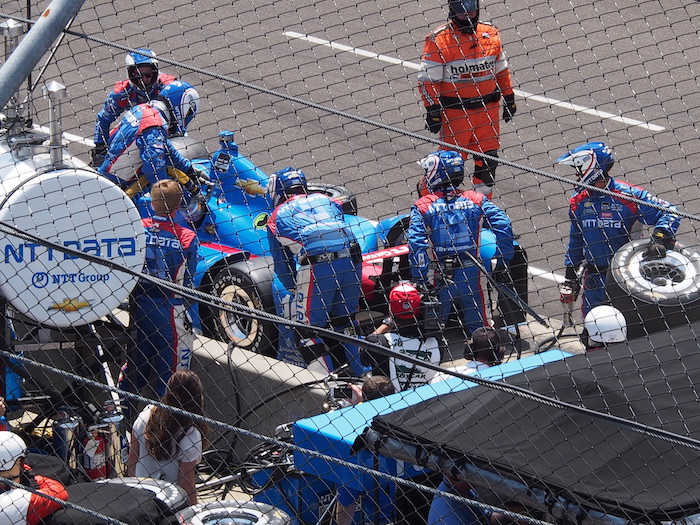 The pits, where tires are changed in seconds, and where a stop could mean the difference between a win or loss

The track itself is a 2.5-mile length and to make the 500 miles that comprise Indy, the cars drive 200 laps. Yesterday, speeds reached 214 miles per hour in the end laps, with the average speed ringing in at about 211 mph. Here we bring some pictures of the cars, the race, the guts and the glory.