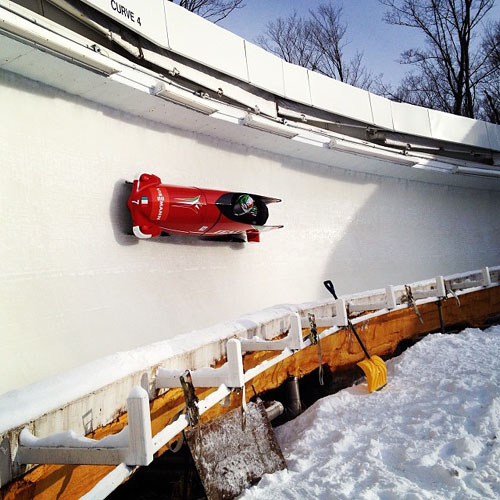 It’s all about the clock in bobsledding. The clock, the racers, and the skill set.

It’s all about the clock in bobsledding. When watching the sport you’ll quickly realize your eyes constantly shifting back and forth between the sled and its time. You try to keep up with the color-coded segment comparisons and appreciate the sports announcers who vocalize those differences to ease the strain of your eyes just a little bit. Yes it’s all about the clock.   Who can beat it? 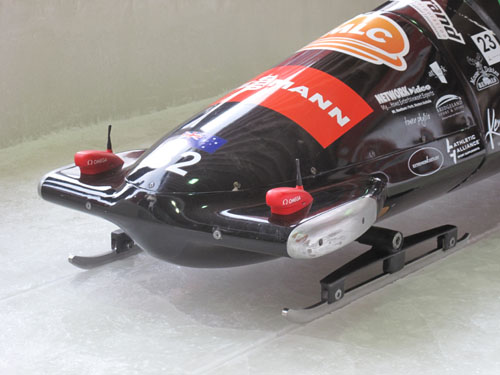 This past weekend, ATimelyPerspective had the pleasure of going to the FIBT Bob & Skeleton World Cup courtesy of OMEGA Watches – official timekeeper of the Cup. I was granted VIP access, allowing me passage to some of the more privileged areas of the Whiteface Mountain sled track in Lake Placid, NY – places few ever get to go.  The weather was bone chilling with a high of 8 degrees Farenheight.  For most of the morning I was immersed in temperatures at about  -2 degrees F.  Fortunately, my VIP badge also granted me access to the heated lodge fully stocked with coffee, fireplace and even hand and toe warmers. 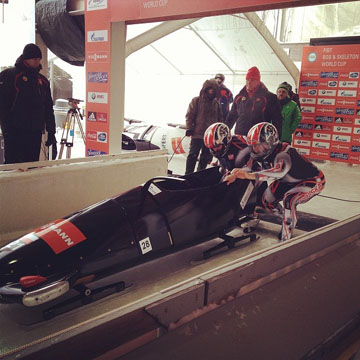 I made my way to the start of the track, the first place where crucial timing comes into play for the bobsledders.  If done flawlessly, a good team can conquer over those first 50 meters in just over five seconds.  It’s   amazing to watch these athletes strip into their aerodynamic lycra suits in the frigid cold and explode themselves, as well as their 450-pound sled, down the start of that icy highway.

The racers can reach upwards of 80 mph as they complete the 1,455-meter track in just under a minute. As a spectator, you truly sense how fast the sleds are going. Its happening right before your eyes, and if you blink, you’re liable to miss them going by. All along the course you hear the echoes of the time comparisons down to the hundredth of a second.  The slightest mishap like a tap into the ice wall or a poor line on a curve can cost the riders crucial time. Those fractions of a second are all that separates first place from second and so on. 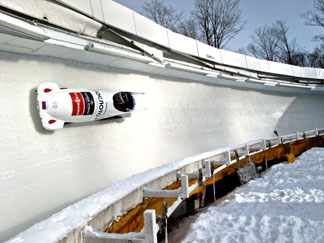 The racers can reach upwards of 80 mph as they complete the 1,455-meter track in just under a minute.

It’s no wonder OMEGA is the official timekeeper of the FIBT World Cup as well of  the Olympics.  This brand has more than a century’s experience in sports time keeping  and has developed some of the most precise methods of measurement.  In early Olympic years, workers simply used hand-held stopwatches. Over the years however, the technology progressed and the timing needed to be more accurate to determine the “true” winner.

Today OMEGA employs the use of infrared photoelectric cells that are embedded into the track and are triggered when the sled crosses the invisible plane.  These photocells are sporadically placed throughout the track creating 15 segments for spectators and 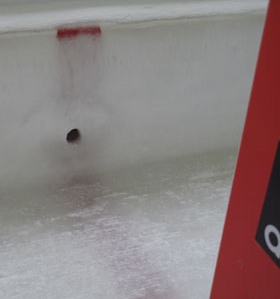 OMEGA employs the use of infrared photoelectric cells that are embedded into the track and are triggered when the sled crosses the invisible plane.

athletes alike to see how each team compares to the next.  They are able to measure the speed with timing accuracy to the thousandth of second.  You can read about their previous Olympic timing here.  Additionally, Omega was in the final testing of some new timing technology that should be finalized and introduced as the 2014 Olympics draw closer.

As to the FIBT World Cup: the U.S.A. fared well. The men took all three spots on the podium in the 2 man bob. The women took second and third with Canada coming  in just a fraction of a second ahead.