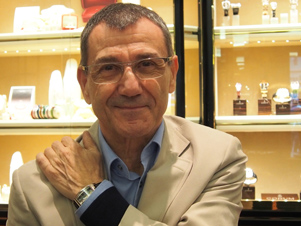 A foremost watchmaker of our times, Vincent Calabrese – inventor of the Corum Golden Bridge — is a self-taught watchmaker. Expelled from school in Italy when he was just 12 years old, Calabrese found work in a watchmaker’s shop where he acquired a few skills before  working as a street watchmaker for almost five years.  In 1961, at the age of 17,  he left Italy for Switzerland, where he worked for a host of different watch brands  developing many superb timepieces before striking out on his own ventures in the late 1970s. Recently at Wempe in New York, we spent an enjoyable few hours with the very passionate Calabrese, and bring you some highlights of that exclusive interview here. 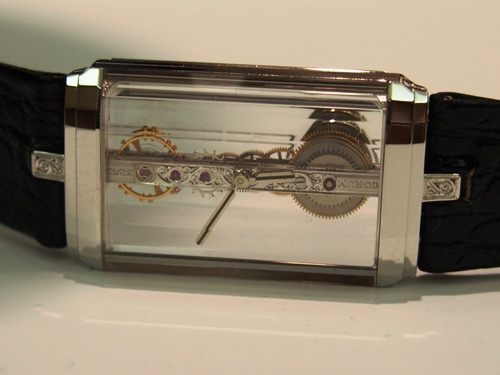 “When I was a watchmaker for brand, I didn’t like getting a case and putting a movement into it,” says Calabrese emphatically. “I didn’t want there to be a dial – a dial hides the true beauty of the watch – the movement. It gave me a sick feeling inside, so I developed the idea of the golden bridge. I was almost motivated by anger and, of course, by passion to create something truly different.”

For Calabrese, the Golden Bridge was the result of his desire to show the movement, and to create a movement never before accomplished – one with linear gear trains visible via a transparent exterior. “I want to show beauty, simplicity and mystery all in one,” says Calabrese. “Sometimes the simplest things to make are the most challenging.” 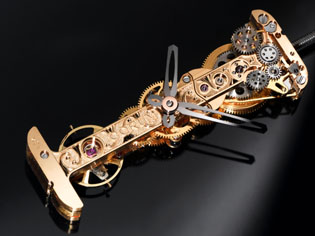 Calabrese said the Golden Bridge was easy to conceive but difficult to make, requiring him to even make some of his own tools to get it done. “It was a simple look, but incredibly difficult to design,” recalls Calabrese. “I had to create the tools to create the watch – nothing existed. It was like being in the Middle Ages.”

Calabrese developed a working patented prototype that won a distinguished award in 1977 at the Geneva International Inventor’s show, where the watch got noticed by Corum owner and founder, Rene Bannwart. Bannwart immediately struck up a relationship with Calabrese and purchased the patent. 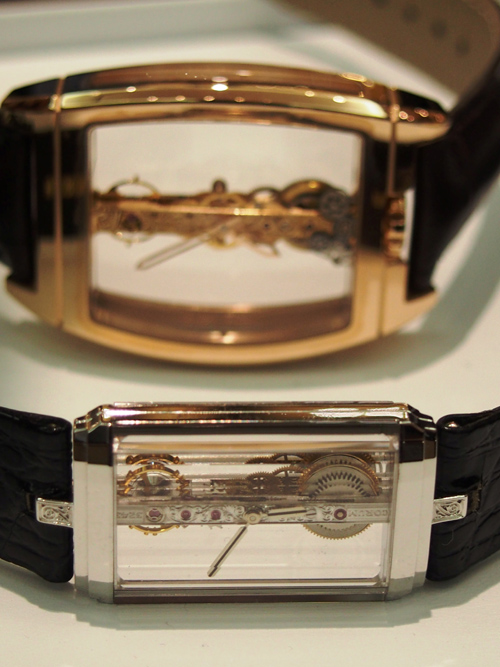 “I knew I didn’t have the finances to make the watch into full production. Each new shape or rendition would require another movement, and it would be hard for me to do that. Corum was a brand that could take the watch into production – they were already working with feathers back then for watch dials. They were creative and I knew I could work with them.”

It was in 1980 that Corum introduced its first Golden Bridge watch under the watchful eye of Calabrese.  That watch drew immediate attention globally, and today, more than three decades later, the Golden Bridge is an iconic maste 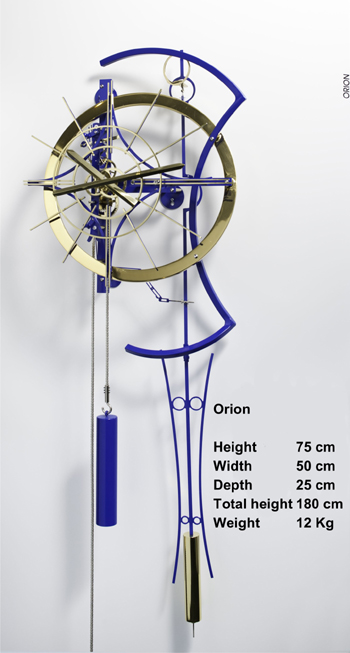 rpiece. Calabrese went on to work with other brands such as Blancpain and Piguet – specializing in tourbillons and

other superb complexities. He also established the Jean Kazes line of incredible open-worked clocks, which he still produces.  Additionally,  he is now working once again with Corum to develop another signature complication watch. “It will be something as unusual as the Golden Bridge, and will become very strong for the brand. I already have something in mind that I think will be great.”  But that something remains   top-secret – and we all just have to be patient.