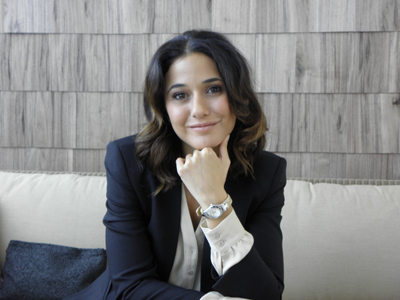 A fan and ambassadress  of Baume & Mercier,  actress Emmanuelle Chriqui has partnered with the brand in the design of specially made watch straps for the alluring Linea line (which is known for its easily interchangeable watch straps and versatility).  With delicate features, sultry eyes and an infectious smile, Chriqui has charmed many in her various roles, including starring in Entourage, You Don’t Mess with the Zohan and The Mentalist. Recently in Geneva, we had the opportunity to exclusively meet with the naturally beautiful and charmingly intelligent Chriqui to discuss her collaboration with Baume & Mercier and her views on time. 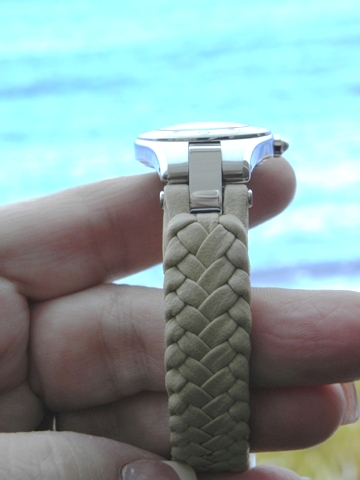 One of the three new Linea watch straps created by Chriqui

“I have gone in and out of the phase of wearing a watch every day.  I am very punctual and time is important to me. I find a watch to be very helpful from that perspective, and also from the fashion sense — to match my moods.”

Chriqui remembers getting her first watch ever from her father, whom she calls her hero. A culturally inspired Frenchman, her father had his own collection of watches, which intrigued Chriqui. Still her first watch request “was for a big clunky men’s two time zone Guess watch, when I was 14.”

It was the start of her relationship with watches. The synergy between herself and Baume & Mercier has been on-going since she visited Geneva at SIHH two years ago for the launch of the Seaside Living campaign and the new Hampton watch collection. “I was thrilled when they asked if I would like to collaborate on a piece. I visited the factory and spend several days with them talking about my design likes, and it seemed natural to create a new strap for the interchangeable Linea line. I said I thought it would be fun to incorporate texture into the look. Having a braided or woven strap is a nice combination of the different juxtapositions of hard and soft. It is cool and classic at the same time.” 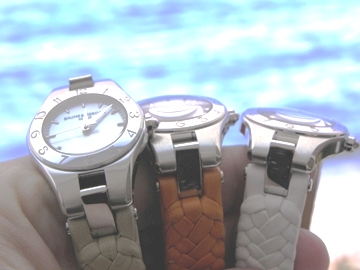 In fact, the braiding of the Chriqui-designed strap lends depth and texture to the watch. The colors of the first collection of straps by Chriqui are white, neutral sand and orange. “White is an important staple for women, and taupe is so clean casual. I also wanted an electric blue, but that didn’t come. It’s ok, though, because the orange is bright and is the color of the chakra power center, so it is a good choice.”

Chriqui admits that time is a mystery for her. “On the one hand, as the seconds and minutes go by without us noticing and we wonder where did they go; on the other hand, sometimes we have the consciousness that time is slipping by so quickly. This resonates with me in the deepest sense. It is bittersweet.”

Chriqui likens that mystery of time to her character in The Mentalist, which makes intermittent recurring appearances.  “She comes in and out 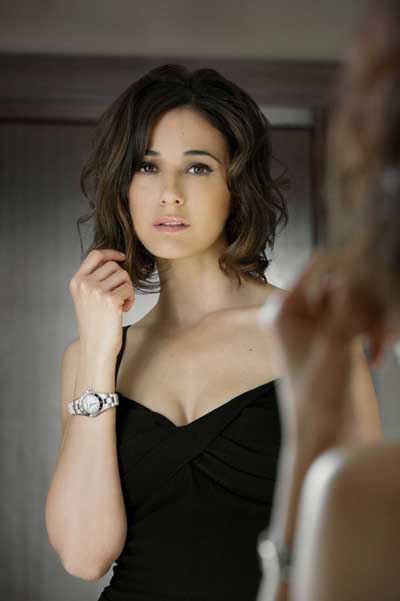 of the show; she runs away and we don’t know when we will see her again. It is a mystery. Sometimes mystery is good.”

So, with a bi-coastal living arrangement and travel around the world for work, Chriqui’s time is short. What would she do with an extra hour in each day?  “I’d take my phone off the hook and just have peace for an hour – no texts, no messages, no computer. I’d take a walk outside, breathe the air and be undisturbed.”