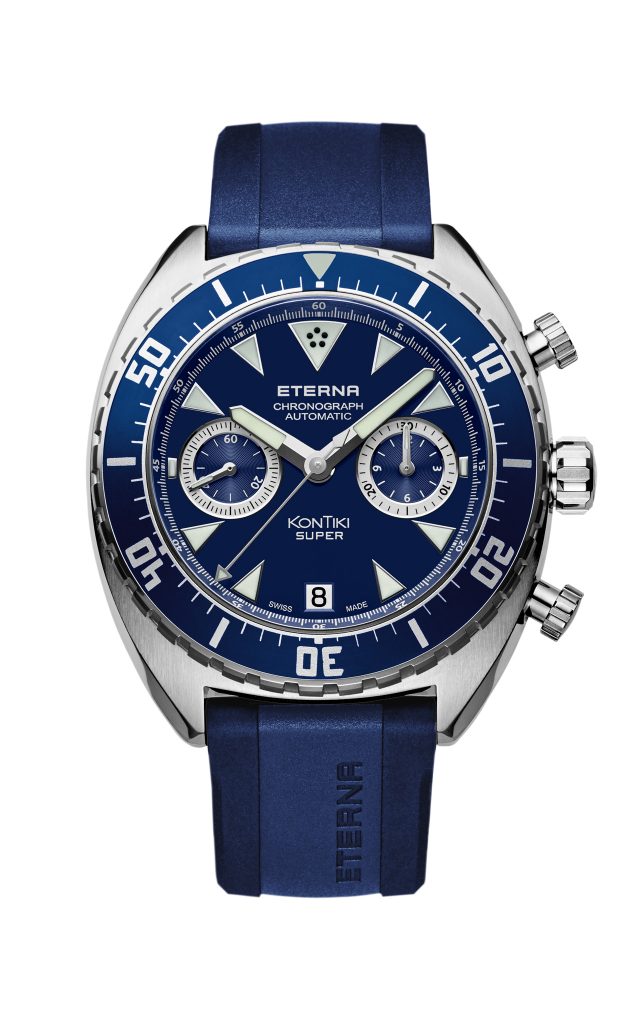 Swiss watch brand, Eterna, has a rich  maritime history.  The brand has long been involved in creating water watches in a collection named KonTiki — after the 1947 ocean expedition. Now, in further salute to the line, the brand unveils the Super KonTiki Chronograph and a Super KonTiki Ladies’ Diver with mechanical movements and key functions.

Before we give all the details of these great new watches, though, we want to spend a little time on the famed KonTiki expedition. It was scientist Thor Heyerdahl and five crew members who crossed the Pacific on a wooden craft to prove that ancient civilizations were capable of such feats. To keep the oceanic journey as authentic as possible, he limited his modern technology to a hand cranked radio for weather reports and six Eterna timepieces to help navigate their way over the seas. Thor, a Norwegian, was a renaissance man who was an accomplished ethnographer, botanist, and zoologist, and in 1947 he and five other scientists left from the Peruvian coast on a craft made from balsa wood — christened the KonTiki after an Incan sun god. 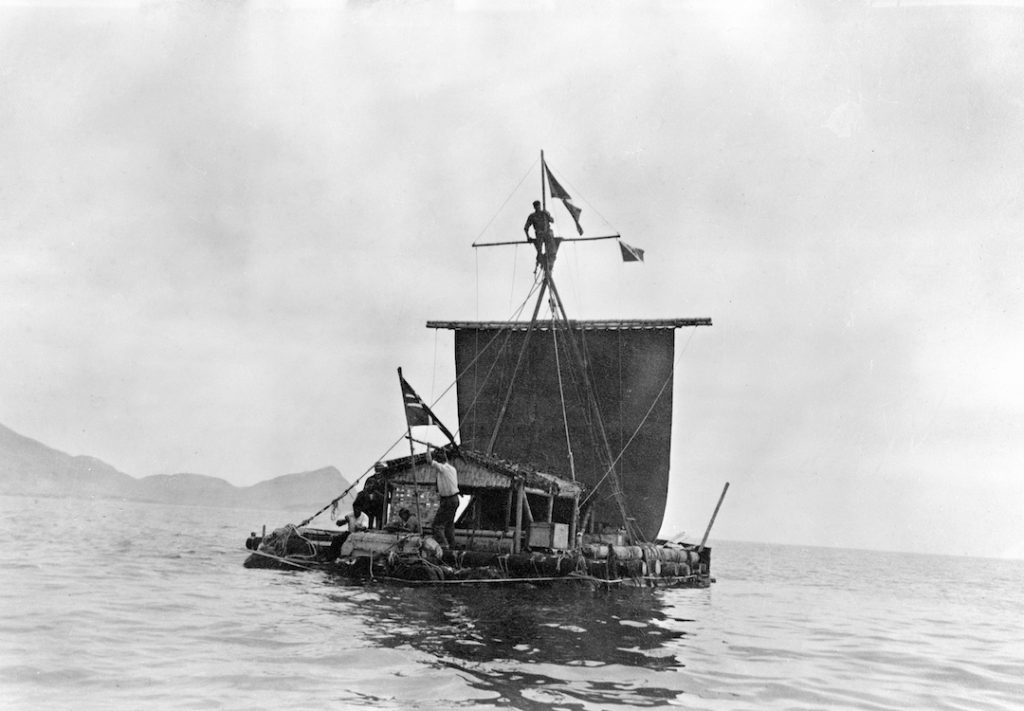 After being at sea for 101 days and traveling 8000 kilometers, Thor and crew made land fall at Raroia atoll in Polynesia. All six watches made the journey intact and showed no signs of the corrosive damage the ocean water is capable of dealing. Upon hearing of the successful journey and at the watch remained largely intact, Etena created the KonTiki watch line to celebrate the achievement.

From a technical aspect the Super KonTiki Chronograph is a power house addition to the line up. It brings with it a favorite complication in the watch community, an in house fly back chronograph, calibre 3916A. What makes the fly back chronograph unique in the market place is that the fly back function allows the chronograph to be reset to zero and immediately started again at any given time during its operation. The movement features a 60 hour power reserve and rhodium finishes throughout. True to the term in house, not only did Eterna developed the movement, but 70% of the components are developed in their Grenchen headquarters. 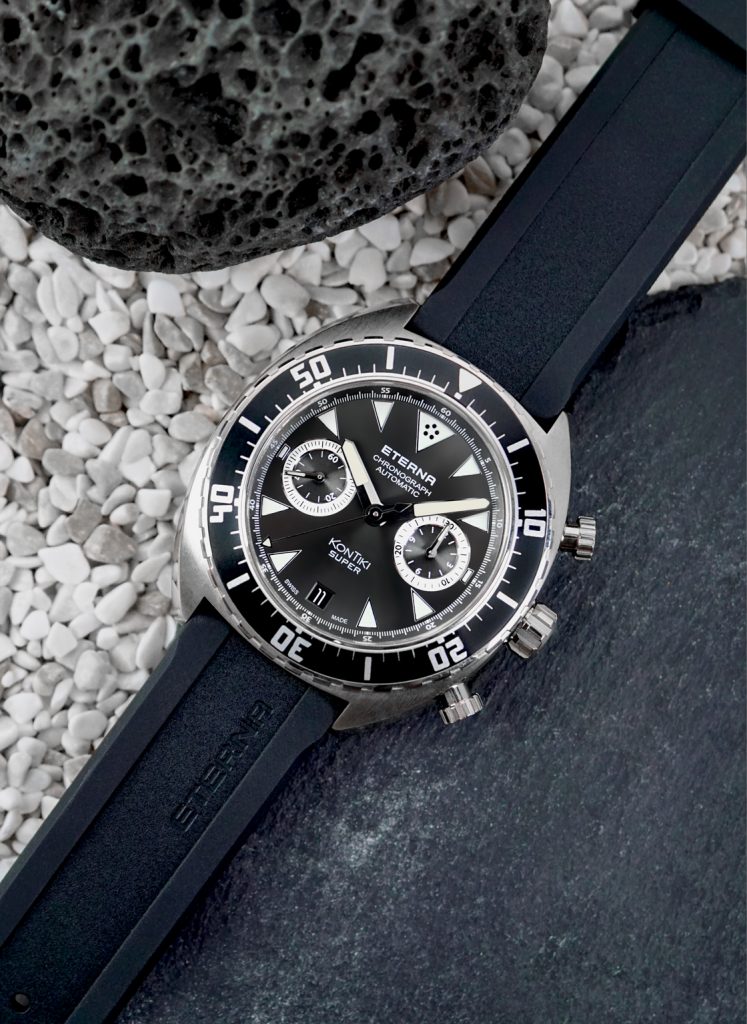 Visually the piece retains many of the styling elements the line is known for, the namely the iconic triangular indecies. Thanks to a generous application of Super Luminova, the dial will remain legible in day and night. Speaking of legibility, did I mention the case comes in at a robust 45mm? The size makes reading the dial a breeze and the dual register chronograph incredibly clear. Final touches include a rotational bezel that adds to the functionality of the chronograph and the sporty feel of the watch. The watch comes in two different limited edition options, either on a rubber strap, $4700 or Milanese bracelet, $4900.

Also new is the Super KonTiki Lady Diver Special Edition watch. Powered by a Sellita SW200 movement, the watch is crafted in stainless steel and PVD gold and features a blue ceramic ring. It is water recession to 200 meters and retails for just about $2,000. 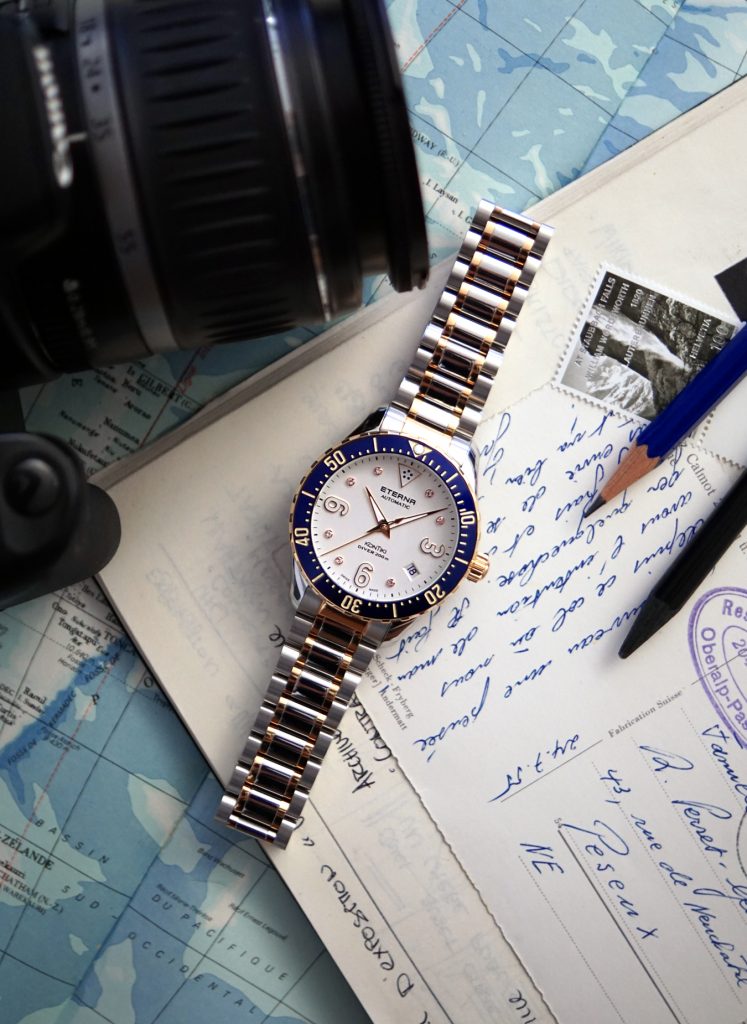 Ulysse Nardin, Oris, Norqain Support Our Environment And Resources
May 13, 2016

A Closer Look At The New Cartier Tank Francaise Watches
May 13, 2016