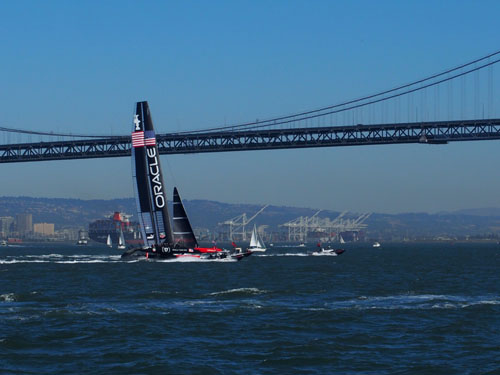 Today we spent the day on board a yacht in the San Francisco Bay with TAG Heuer, Official Partner with Oracle Team USA, Defender of the 34th America’s Cup. We witnessed the first two races of the main event — the world’s oldest active sporting trophy. While Oracle Team USA went into the race with two losses against it (due to a penalty it incurred), the team maneuvered its way around the picturesque Bay with agility. Unfortunately, the team lost both races  giving a 2-win victory to Team New Zealand. 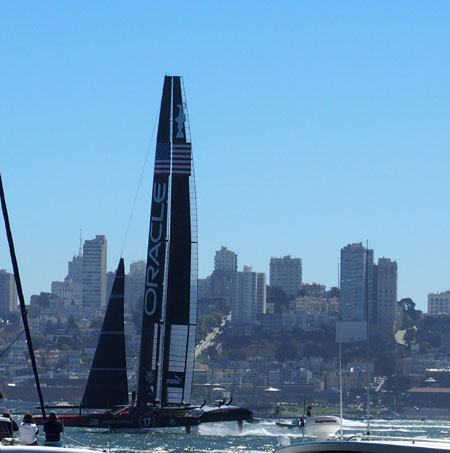 The new 72-foot wing sail catamarans seem to fly out of the water at great speeds.

The races were wonderful to watch in the choppy waters of the Bay, with these massive new 72-foot wing-sail catamarans making a significant impression as they zipped by at three times the wind speed thanks to the wing sail. In fact the wing sail of these boats measures 131 feet tall – 29 feet taller than a 747 Boeing jet wing. Even though it is composed of carbon fiber, it weighs 3,000 pounds. It sits atop the catamaran base that weighs another 10,000 pounds. Still, the magnificent vessels swiftly negotiate the water and sails by so quickly that one can’t help but gape. 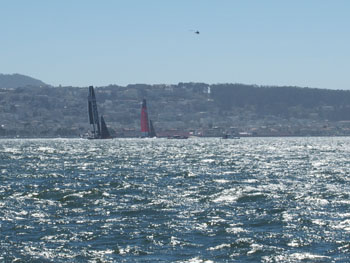 Oracle Team USA and Emirates Team New Zealand faced off today for the first 2 races of the America’s Cup.

According to Stephane Linder, president and CEO of TAG Heuer worldwide, “This racing is all about technology, precision and performance – values we at TAG Heuer share, so we are very happy for this relationship.” Despite the day’s losses, Linder was not disheartened. “In sports you can’t always win, and when you lose, you learn something.”

Today’s score ends the first day of racing with Oracle Team USA at a -2 (due to those penalty losses) and Team New Zealand (sponsored by Omega) at 2. The winner is the first to reach a total of nine wins (or in Oracle’s case, 11 to compensate for the negative 2). Sail On. And stay tuned, we will keep you informed.