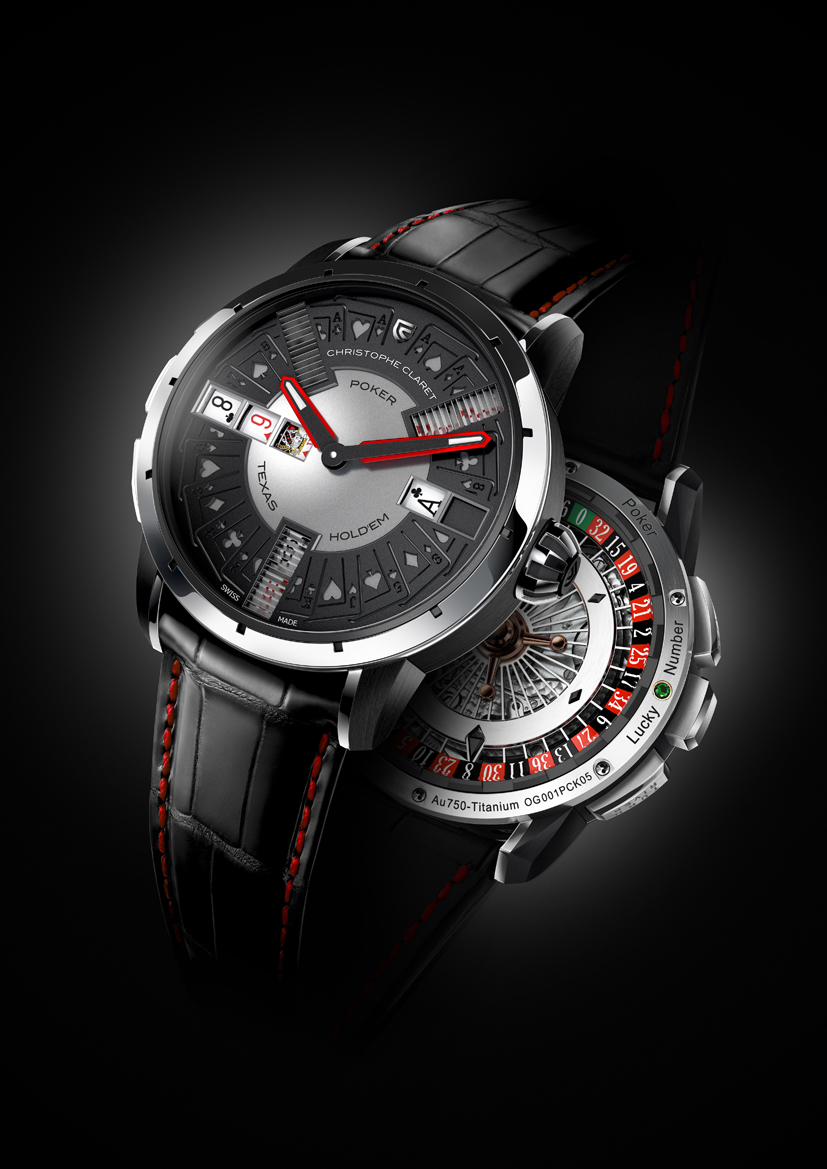 The latest addition to Christophe Claret’s trilogy of gaming watches is the Poker – unveiled here in Geneva today at a press conference that reinforces the genius behind Claret’s thinking and craftsmanship and takes interactive haute horologerie to a new level. The 45mm watch – which offers Texas Hold’em poker — houses a sophisticated mechanism that enables three players (plus the house) to play the world-famous game of Poker.  The only problem is that with this game,   unlike the lyrics from Kenny Rogers’ famed song The Gambler: “You got to know when to hold’em, know when to fold’em, know when to walk away and know when to run“–you just won’t want to run – you want to play and play.

According to Claret, this watch was supposed to be the first of the trilogy (that included the 21 Blackjack and Baccara) but he was stumped by a particular issue with bringing a complete 52-card game (while adhering to the rules of poker) to fruition. The challenge was in the number of combinations (in real poker there are 32,768 for a single player, or 98,304 combinations for three players). He says he mulled it over for a while. The solution came to him while he was playing a game on the floor with his child. It still took another two years to bring the concept to fruition in the PCK05 movement. This completely original automatic-winding in-house caliber consists of a staggering 655 components, and features two mainspring barrels (for 72 hours of power reserve). 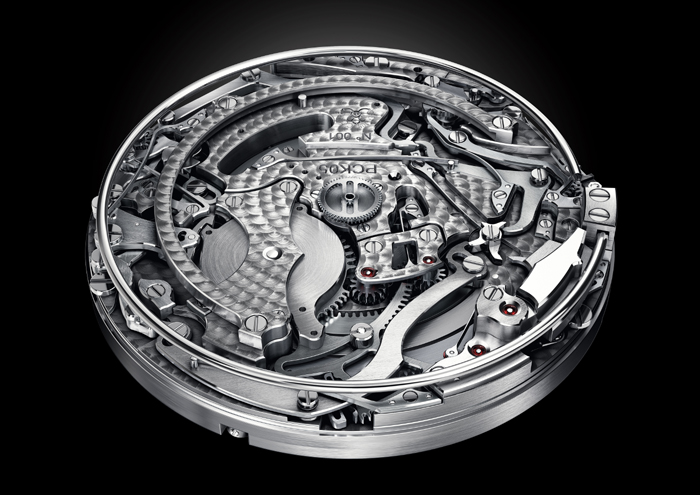 The complex movement of the Poker watch consists of more than 650 parts.

Poker replicates the game in an automaton format that blows your mind with its complexity and its converse simple use. Up to three players face each other around the watch dial (at 2:30, 6:00, and 10:30). The first hand is dealt via a pusher at 9:00. This winds up a spring that spins four discs (mounted on ceramic or ruby bearings to turn freely) that have the cards printed on them. After a few moments the discs are immobilized at random by dampers. Once the push-piece has been pressed, the now shuffled cards are dealt in the players’ windows and an ingenious mechanism of angled shutters makes them invisible to the other players. There are a series of ensuing deals: the flop, the turn, the river – for which you need to understand Texas Hold’em Poker to understand the terms. Nonetheless, suffice it to say that the complexity of what occurs is amazing. And, true to Claret’s inimitable style, with each flop, turn/river push, a patented cathedral gong sounds.

The 77-part dial (yes 77 components for the dial alone) is entirely made and assembled in house at Manufacture Claret. A matte black ring, open-worked with playing cards, is overlaid on a silvered background. The ruby, spinel and titanium hands –expensive to make because of the complexity of machining these precious materials – are enhanced by a luminescent coating.

Oh, and if the game doesn’t get you heavy breathing, you’ll want to huff on the watch anyway because that breath of air forms a condensation on the sapphire crystal that reveals a pin-up girl… welcoming you to the world of casinos. The transparent case-back provides a view of the oscillating winding rotor in the form of a roulette wheel – a signature of the Christophe Claret Interactive Gaming Complication collection. Once activated by one or two shaking motions, the oscillating weight turns for a few moments before stopping and an arrow points to one of the 37 numbers on an inner ring.  Four versions of Poker are being created – each in a limited edition of 20 pieces.The watch is covered by a worldwide patent.