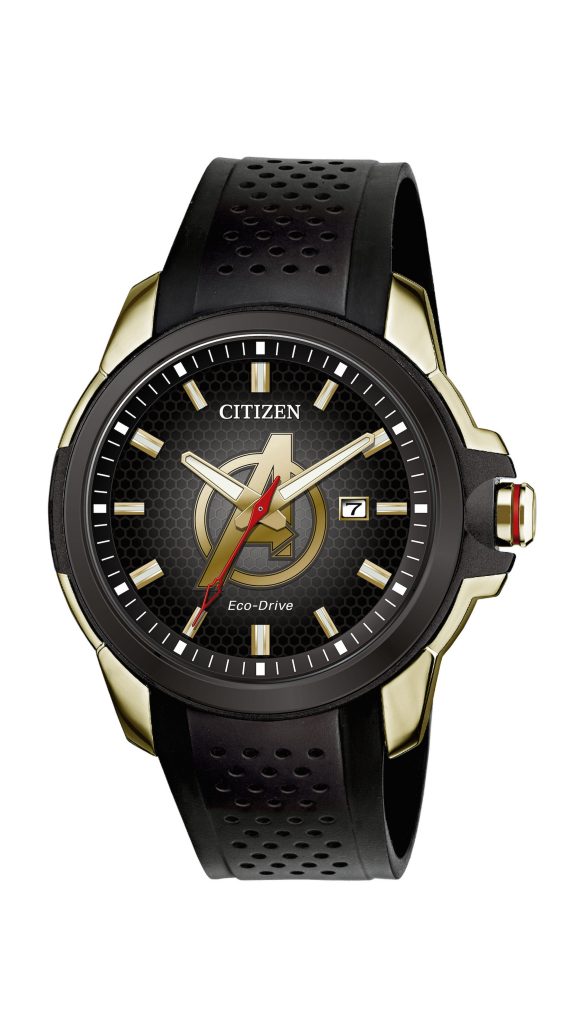 Earlier this year, Citizen Watch Company announced that it would be the Official Timepiece of  two world-class Disney resorts: Walt Disney World(R) Resort in Lake Buena Vista, FL,  and Disneyland Resort in California, as well as of Marvel New Media’s Creative Space.  In this relationship, Citizen’s logo will grace the Main Street USA clocks around the Magic Kingdom Park in Florida and Disneyland Park in California.  Additionally, the Citizen brand name will be featured on select FastPass clocks. With this partnership, these two resorts will begin carrying Citizen watches unique to Disney Parks  in their stores. One of the first examples was just unveiled by Citizen at last month’s New York Comic Con:  eight Marvel timepieces inspired by some of the most popular Avengers, including Spider-Man, Hulk and Captain America. 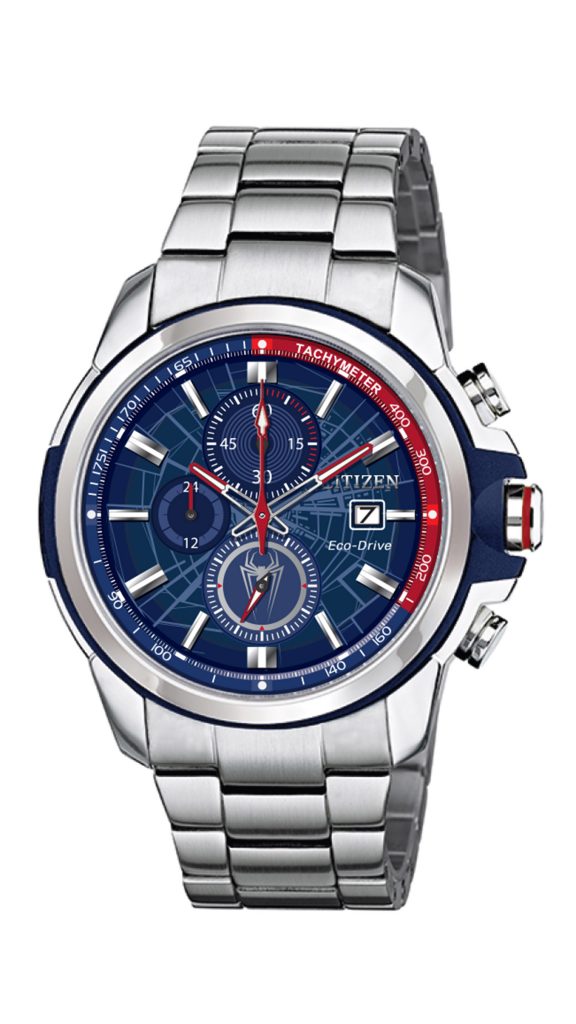 The new relationship with Disney Resorts also translates to Marvel, a wholly-owned subsidiary of The Walt Disney Company. The new Citizen Marvel Heroes-inspired watches will be available for sale beginning in Spring 2019. However, they are well worth taking a close look at now. The series includes two Black Panther watches with tribal pattern on the dials, an Avengers watch inspired by the camaraderie of the heroes as a team, two Spider-Man watches that utilize the super-hero’s blue and red color scheme, and more. There is even a chronograph version of a Spider-Man watch with web dial design. The Captain America watches pay tribute to his history as a soldier in World War II, with camouflage detailing on the strap and a 24-hour military time track on the dial. The Hulk watch features larger-than-life oversized Arabic numerals in green.  All of the watches feature custom casebooks with etching and Marvel logo and retail from $275 to $625. 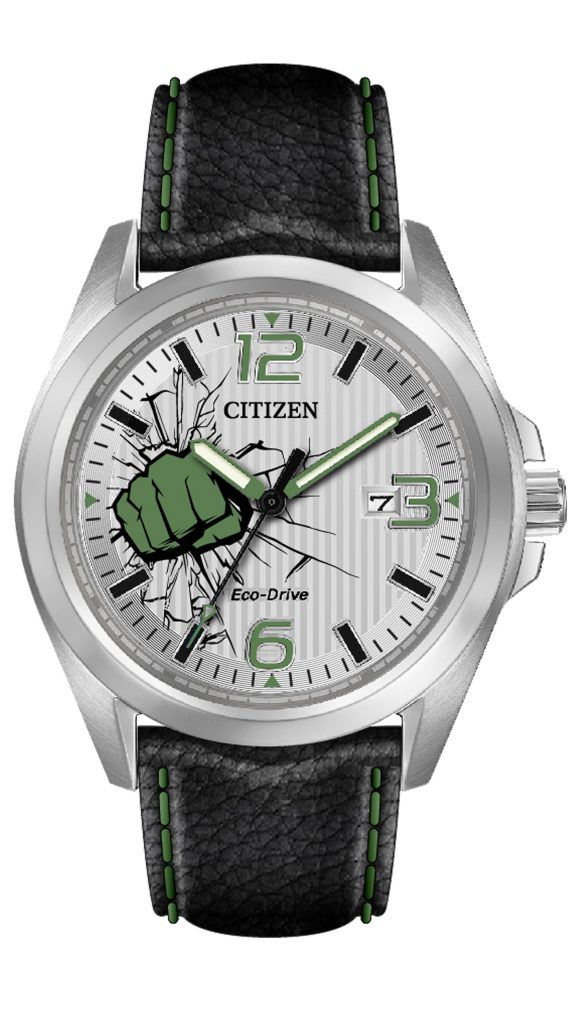 “We are excited to share with everyone the first timepieces Citizen has exclusively designed for Marvel,” said Jeffrey Cohen, President, Citizen Watch America. “Earlier this year, we announced our partnership with Marvel and were highly anticipating the opportunity to create product around the many inspiring stories of Marvel characters and super heroes. We expect that all enthusiasts and fans alike will find a watch they can relate to and wear in support of their favorite character or for the unique design elements.”

Another timing aspect of the Citizen and Disney relationship comes in the form of Citizen as the  Official Timekeeper of runDisney race event weekends that take place at Walt Disney World Resort. During the races, the race clocks will carry the Citizen logo at the beginning and end of the races. The brand is also a title sponsor of the Disney Dreamers Academy,  dedicated to helping young people  to “dream big.”  Citizen will also sponsor the Marvel Minute for the remainder of 2018, as well as other digital content on Marvel.com.

“Disney is honored to align with Citizen, a stalwart brand that has stood the test of time.” said Carlos Castro, vice president of Disney Corporate Alliances. “At Disney Parks, every minute is magic. So, it’s appropriate that our Guests will have access to one of the world’s greatest names in timepieces, as they celebrate their time together creating memories with friends and family.” 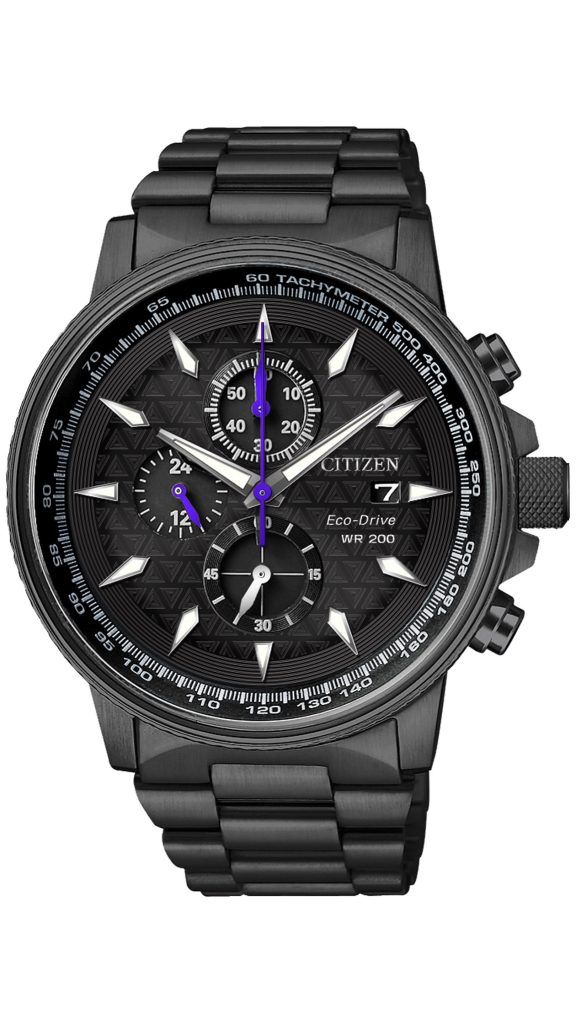 “To engage with the legacy of the Disney Parks at such a vital time in their history, and Marvel with the blockbuster success of Marvel Studios’ ‘Black Panther’ and the much-awaited launch of Avengers: Infinity War, is a wonderful way to celebrate our 100-Year Anniversary,” said Citizen’s  Cohen.

Interestingly, this new promotional alliance also provides Citizen with worldwide music licensing opportunities. With so few watch brands involved in the world of music, I personally look forward to where this may lead.

In other news, Citizen has also announced its “My Citizen” application for iOS and Android users to help streamline timepiece registration processes for Citizen watches.  The first app of its kind, the “MY Citizen” app, which  helps customers   access their setting instructions and register their watches for warranty, digitally recognizes the face and caseback of any Citizen watch.  It allows a user’s smartphone to first identify, then transmit model, serial and caliber information to an online watch registration form, making registration, accessing of user manuals, and contacting customer care seamless. It also provides notifications for new product releases and quick tap access to setting instructions when daylight savings or time-zone changes have been detected.