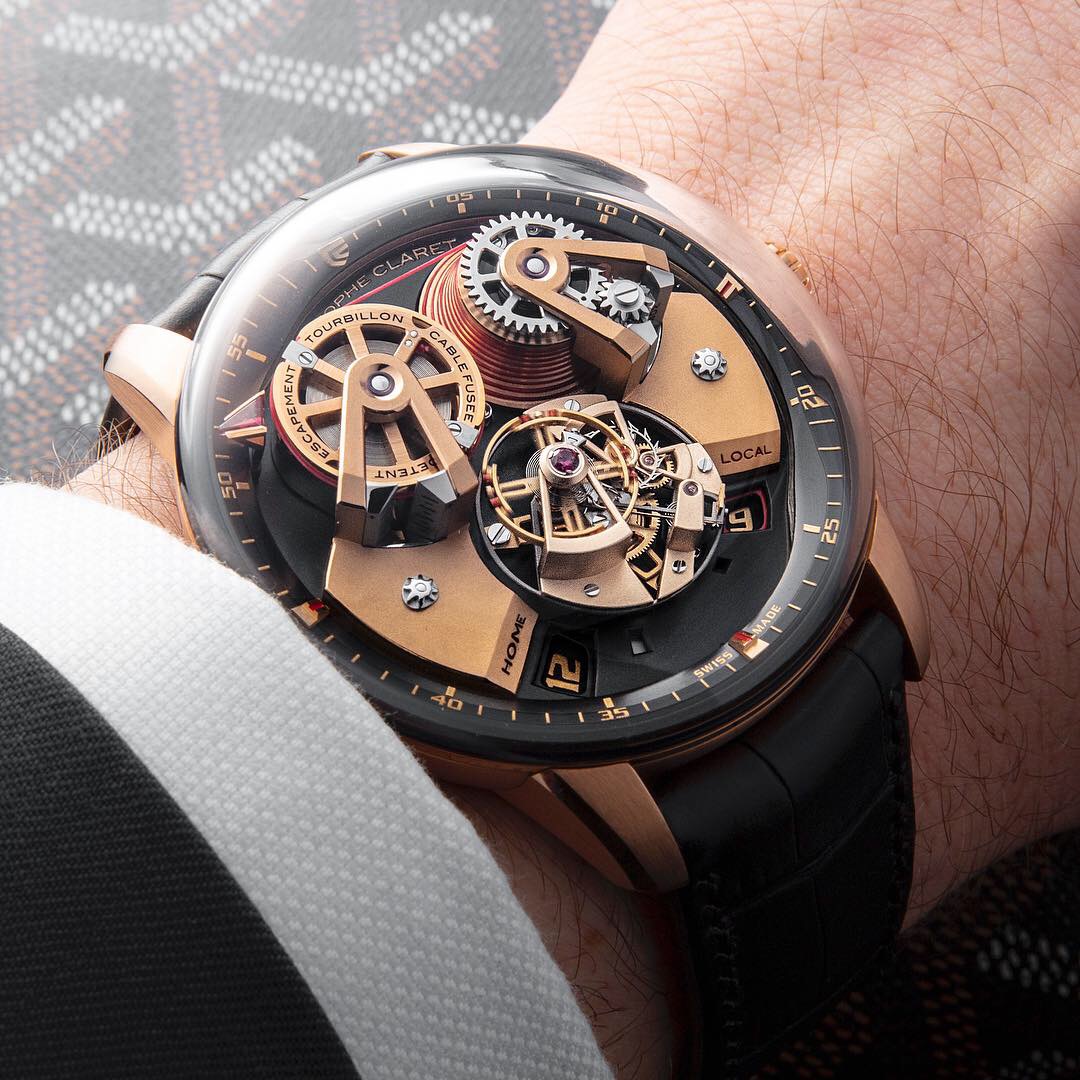 This year marks the 10th anniversary of independent eponymous brand, Christophe Claret (and the 30th anniversary of the Manufacture). A master at repeaters and chiming watches, and of very particular complications, Claret knew he wanted to create something special for this occasion. The Angelico Tourbillon watch with long detent escapement and cable-fusee transmission system is special. It was seven years in the making, as it took Claret and his team that long to find solutions to enable the detent escapement to resist to shocks and lateral impacts. It then took two more years to combine the escapement with the tourbillon. 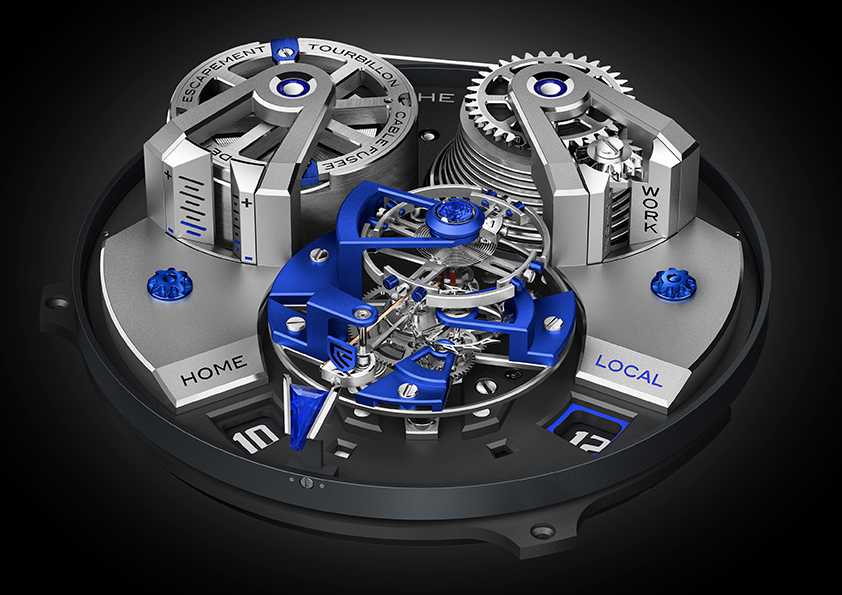 For Claret, who has been building watches for more than 30 years, the quest was for ultimate precision.  For the very first time in a wristwatch, the Angelico combines tourbillon with a long detent escapement with a cable-type fusee transmission system, as well as an instant-jump dual-time display  with day/night and 72-hour power-reserve indications. The watch is named for the Italian   Renaissance “painter of angels”, Fra Angelico. 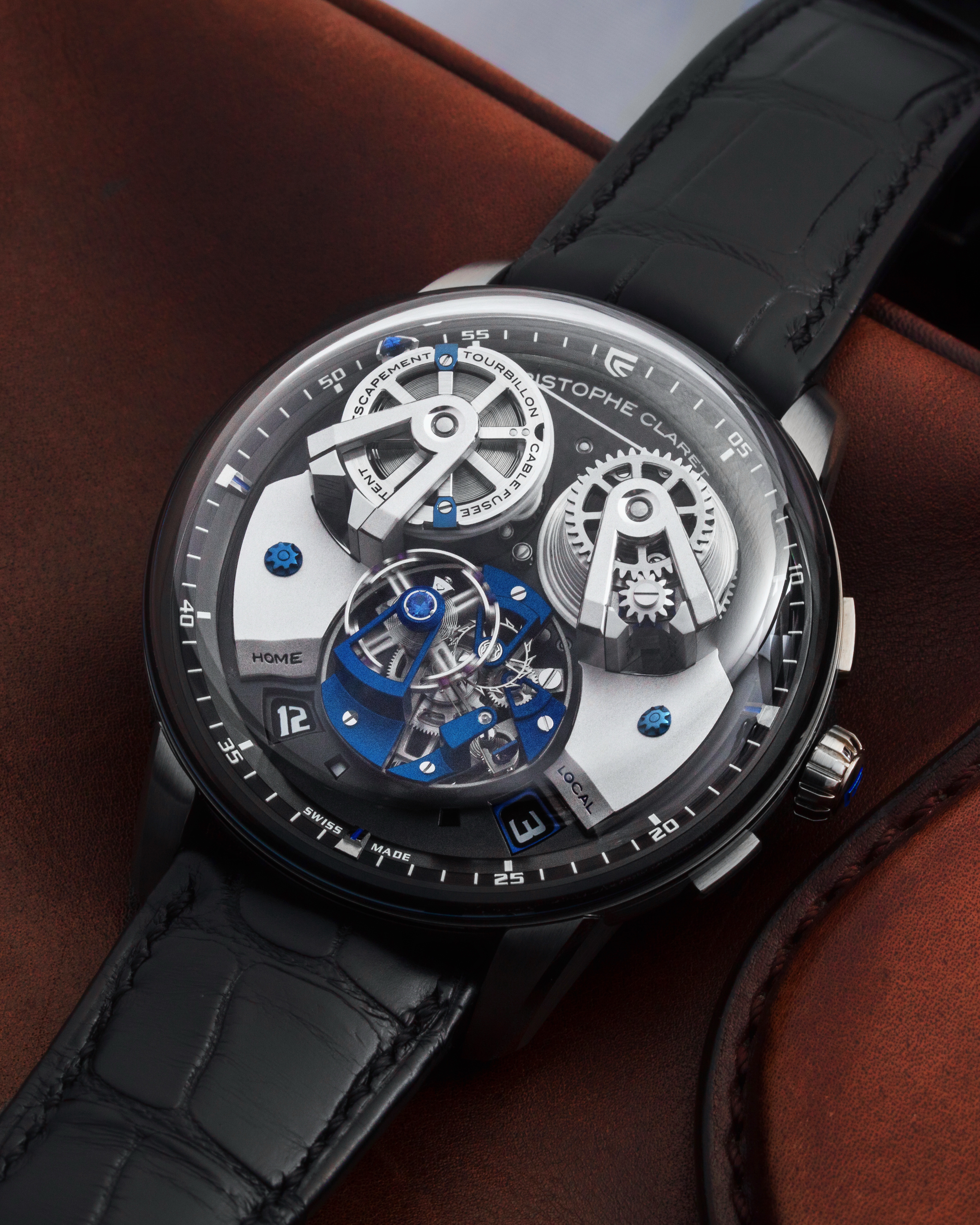 The traditional long detent escapement was originally designed to operate only in a stable position. So, to prevent the detent from turning over, an anti-pivot cam, integral to the sprung balance, works in conjunction with the safety finger. It is a system that Claret incorporated into his Maestoso watch  but now it is fitted  in a tourbillon that makes one full rotation in six minutes– keeping its inertia in check. The tourbillon is created in titanium and the bridges are made of aluminum to keep the weight light. This is especially important because the tourbillon cage measures a large 16mm in diameter in order to provide a bigger view of the detent escapement. 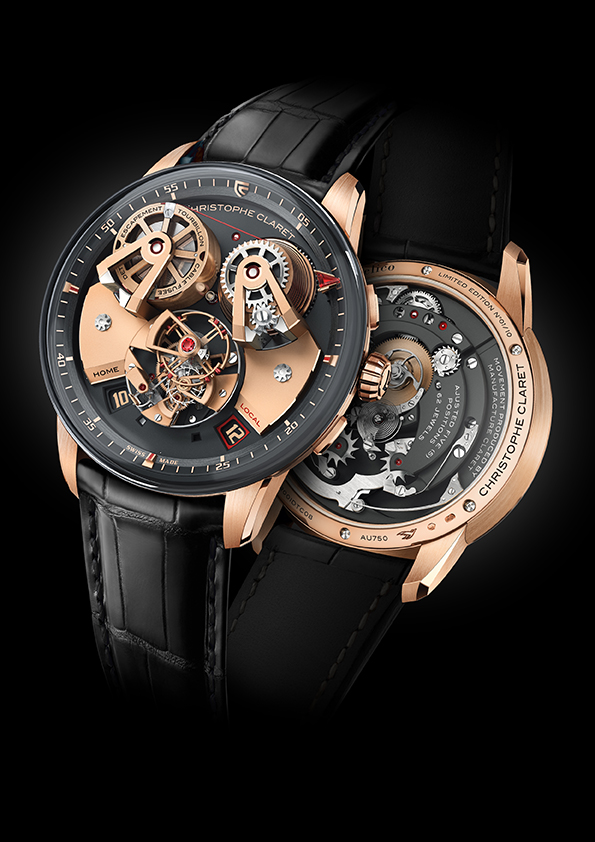 In addition to equipping the tourbillon with a detent escapement, Claret also incorporated the concept of constant force into the watch — wherein the constant supply of energy to the movement is delivered by the cable-type fusee transmission mechanism that is linked to the double mainspring barrel. This system uses a high-tech Dyneema super-strong nano fiber cable instead of the traditional chain  and fusee in order to optimize efficiency by eliminating  the friction between links in a chain, and also to regulate the power reserve.  The cable also is longer than a traditional chain and can wrap around the barrel twice — offering better distribution of the force exerted on the cable. it offers 72 hours of power reserve.

The watch offers the indication of two time zones via a jumping hour display appearing in counters at 5 o’clock and 7 o’clock, along with a day/night indication. The minutes are displayed by a peripheral hand adorned with a natural ruby on the red gold version, or with  a blue sapphire on the titanium model. The 45.5mm case is further equipped with a domed sapphire crystal.