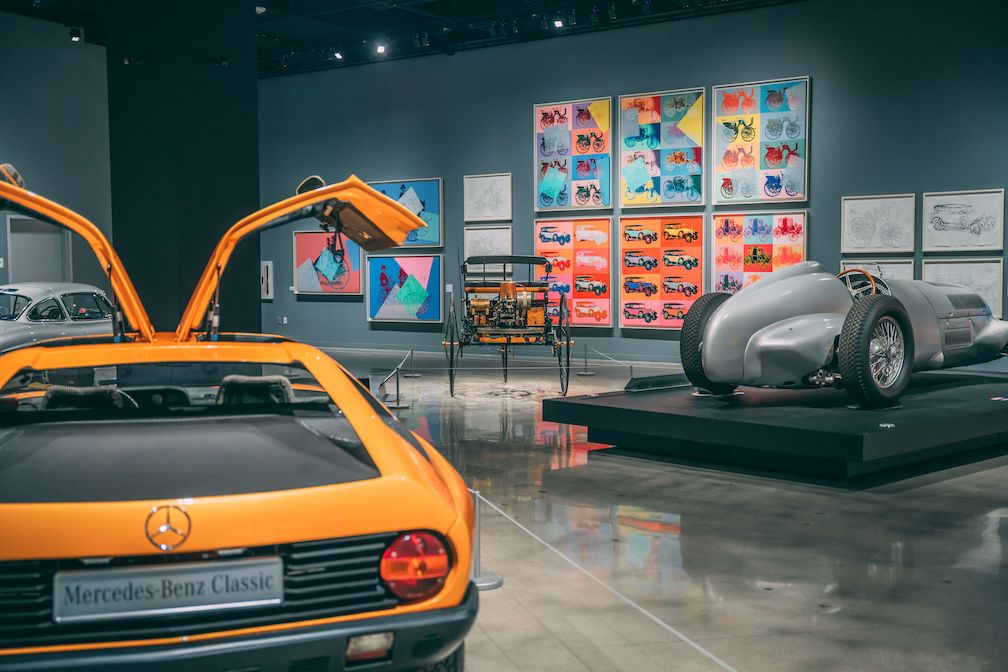 Somebody really put their collective creative hats on for the newest exhibition at the well-known Petersen Automotive Museum in Los Angeles.  Andy Warhol’s  Exclusive “Cars” series of works of art is now paired with exceptional and rare Mercedes Benz vehicles that are the subject matter of the Pop-Art Icon’s work.

Appearing for the first time in North America in more than 30 years, “Andy Warhol: Cars – Works from the Mercedes-Benz Art Collection,” the exhibition presents an exclusive look at the relationship between the “Cars” artwork series and the vehicles it depicts. Five  of the eight Mercedes-Benz vehicles ultimately depicted in Warhol’s final commission will be on display – on loan from a variety of museums. The 40 original Warhol works of art are on loan from the Mercedes-Benz Art collection. 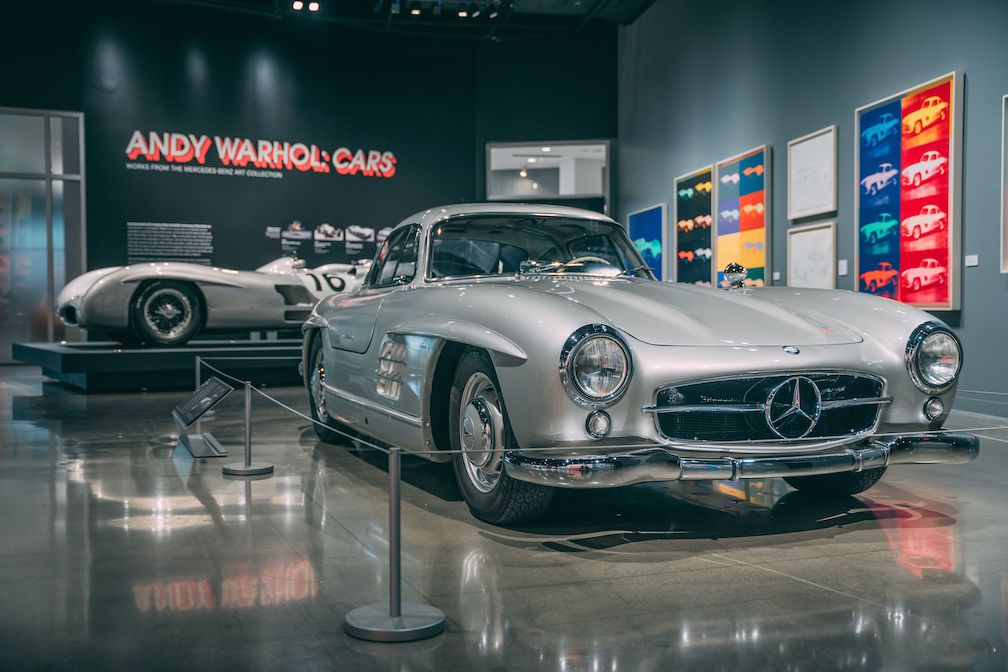 “Among the extremely rare assemblage are some of the most iconic and valuable cars in the world. A 1937 W 125, on loan from the Mercedes-Benz Museum in Germany, was initially built for Grand Prix racing and features a supercharged eight-cylinder engine producing 637 horsepower, making it one of the most powerful road-racing cars for three decades. Also making its way from the German museum is the unique 1970 C 111-II. The experimental Mercedes-Benz used a highly aerodynamic fiberglass body and tri-rotor Wankel engine (later replaced with a turbo-charged diesel) to reach speeds of 200 mph.

On loan from the Indianapolis Motor Speedway Museum is a 1954 W 196. A Formula One car piloted by the legendary Juan Manuel Fangio and Stirling Moss, the W 196 model won two world championships before Mercedes pulled out of competitive racing for three decades. 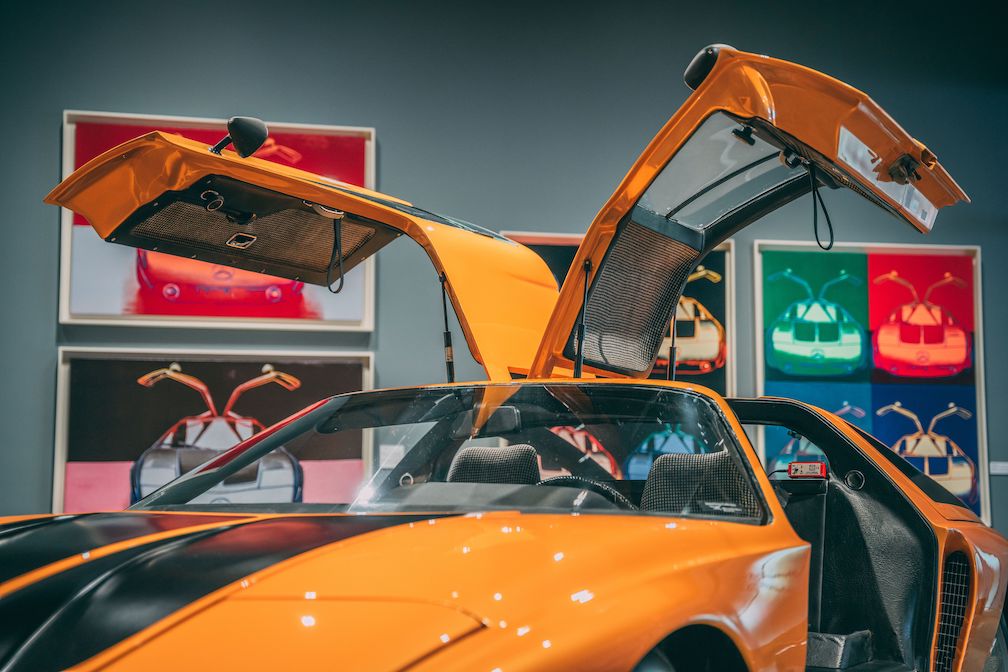 Widely known as the initiator of the Pop art movement of the 1960s, Warhol was famous for his iconography of everyday life items like Campbell’s Soup cans, Coca-Cola bottles and Brillo boxes, in addition to his colorful renderings of a multitude of famous figures and celebrities (his “Shot Sage Blue Marilyn” portrait of Marilyn Monroe recently sold for a record-breaking $195 million).

Mercedes-Benz originally commissioned the “Cars” series in 1986 to help celebrate its 100th anniversary after seeing Warhol’s silkscreen prints of its 300 SL Coupe. Warhol planned to create 80 pieces of art using 20 different Mercedes models spanning the German automaker’s 100-year history. But only 49 works, 36 screen prints on canvas and 13 drawings, were completed before Warhol’s unexpected passing in 1987 after routine surgery leaving the project unfinished. 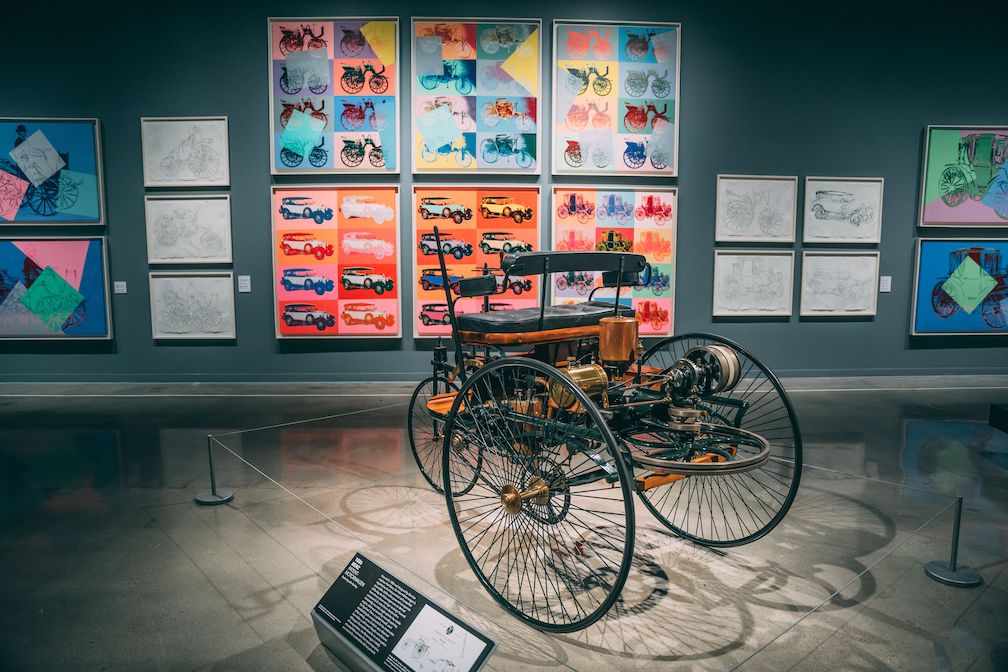 Also on display in an adjacent gallery will be the 1974 Rolls-Royce Silver Shadow owned by Warhol. After achieving commercial success with his art, Warhol bought the Rolls-Royce new and kept it for the rest of his life. Without ever obtaining a driver’s license, Warhol never drove the Silver Shadow, always riding as a passenger and relying on his friends for transportation. His long list of famous chauffeurs includes Mick Jagger, Imelda Marcos and Liza Minnelli.”