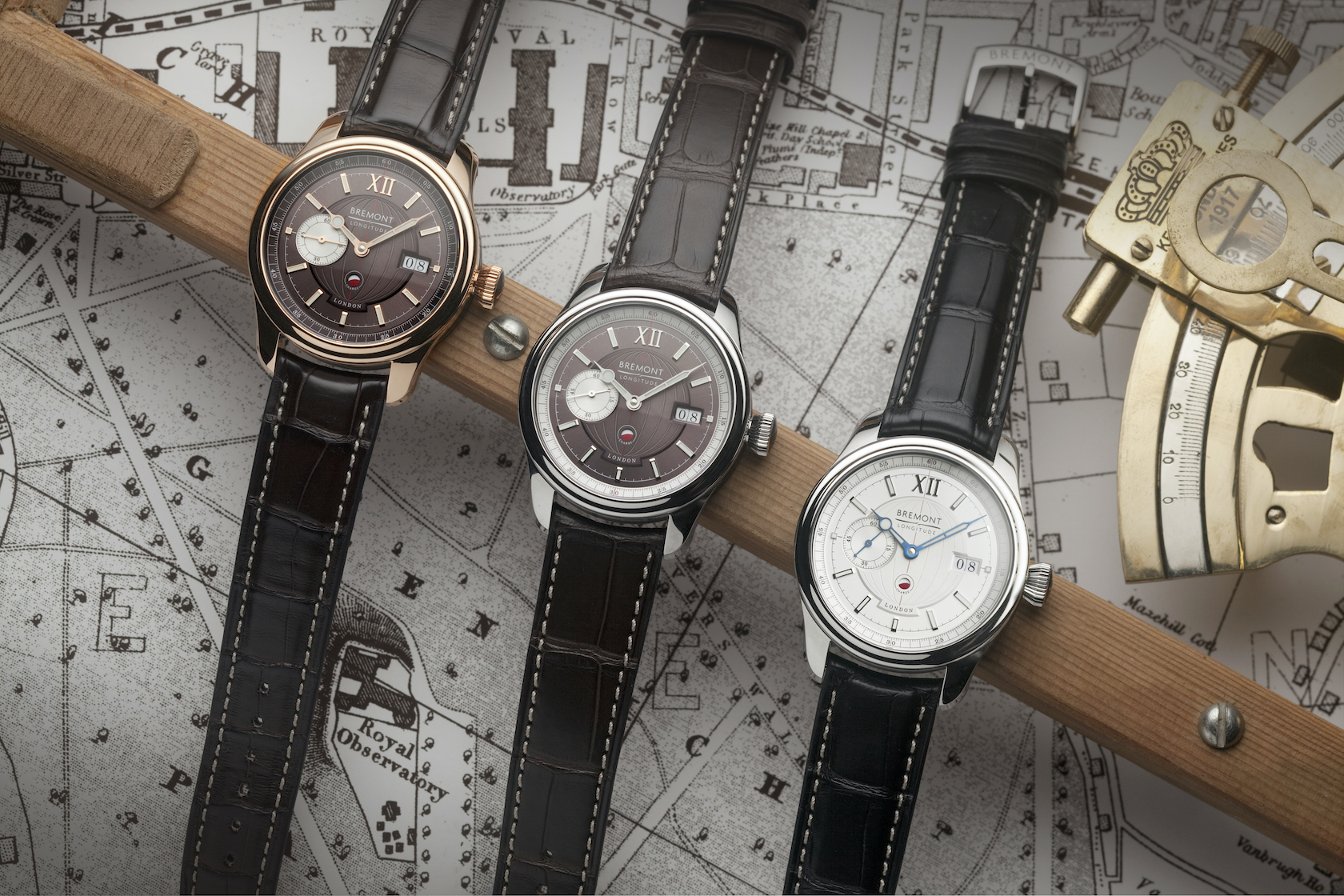 British watch brand Bremont changes the English watchmaking landscape with an in-house made movement, fully assembled in its new workshops on its Henley-on-Thames location – marking the long-awaited return of serially produced British watches. The movement is housed in the new Longitude collection of watches, made in the new Manufacturing and Technology center, called The Wing, that is an addition to the exiting workshops. For the first time in maybe a century British, watchmaking is now back in full swing.

In a huge announcement today, Bremont — originally founded by brothers Nick and Giles English in 2002 —   showcases it’s all-new Longitude limited-edition watches inspired by the Marine chronometers of yesteryear and housing a movement made completely in house. It is important to note that Bremont purchased all of the intellectual rights and plans for this modular movement from Swiss brand “THE+”, giving Bremont the ability to reconfigure the caliber and make necessary changes to adapt to its Longitude line.  The brand’s in-house team modified the base K1 caliber, resulting in the ENG 300 movement series, with 80 percent of the base caliber re-engineered – complete with several design improvements. 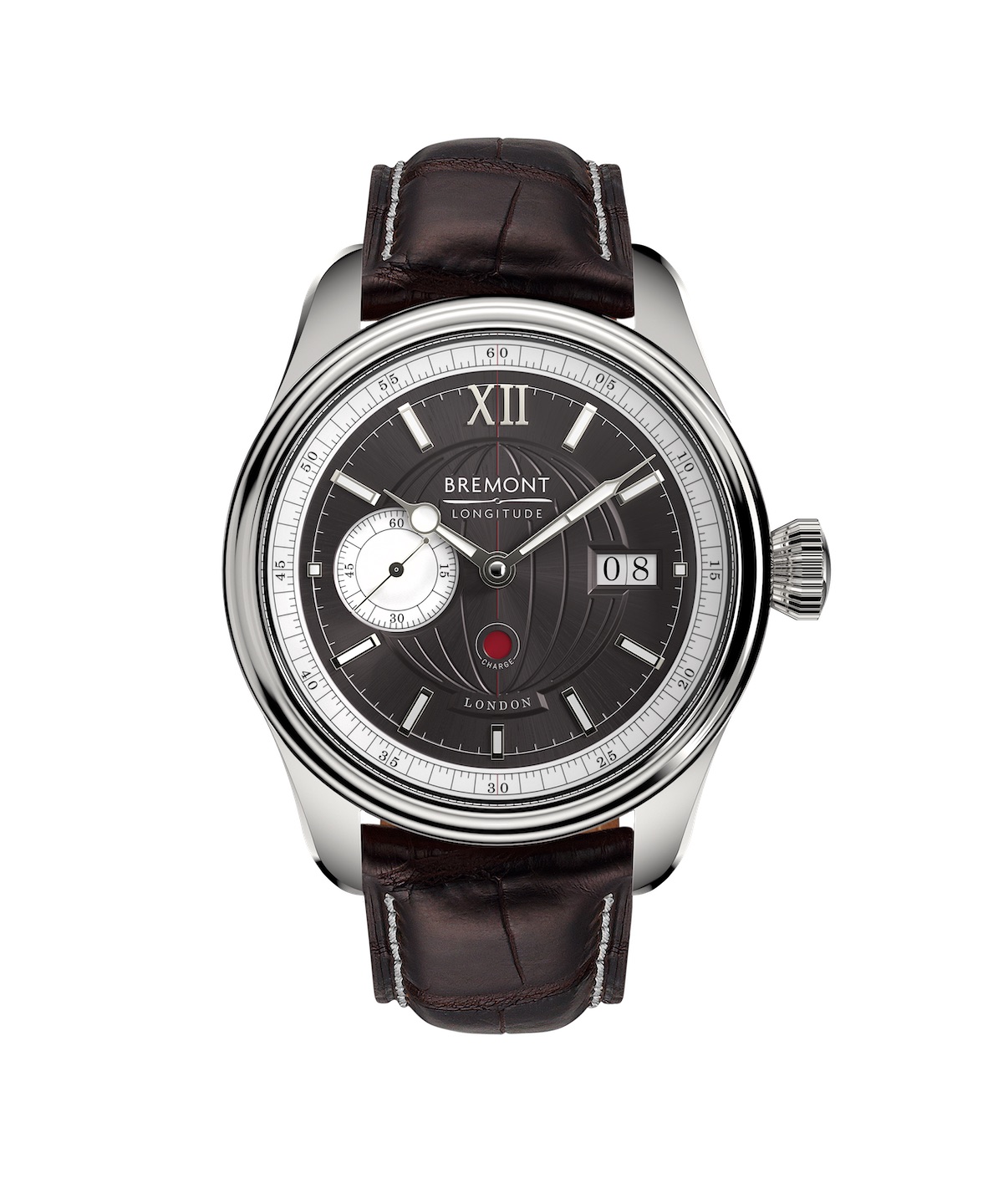 Bremont Longitude Collection watches are made using a piece of the brass from the Meridian line.

While some watch pundits may argue that it is not an in-house-developed movement, Bremont’s master watchmakers have more than tweaked it and made changes accordingly for its needs. Not only does the brand own the caliber, but also has plans to develop further complex timepieces in-house in the ENG 300 collection. Additionally, all of the watch components are made in Henley-on-Thames, and all of the timepieces are assembled in house. While the first edition Longitude watches are not certified chronometers, the plan is for all future collections to be tested and certified in-house with their rotor attached to ensure less chance of precision alteration. Furthermore, the new limited-edition Longitude watches are sold with an impressive five-year warranty.

With this monumental step forward in British watchmaking, Bremont is quick to acknowledge that independent eponymous brand Roger Smith has been creating watches in England since 1971. His timepieces, however, are haute horlogerie pieces made in small numbers by the brand’s assemblage of watchmakers under the vigilant eye of Roger Smith.  The Bremont pieces occupy a different realm of watchmaking. The newest Longitude watches are the result of a culmination of almost 20 years of research and development, and of fortitude and commitment on the part of its founders. 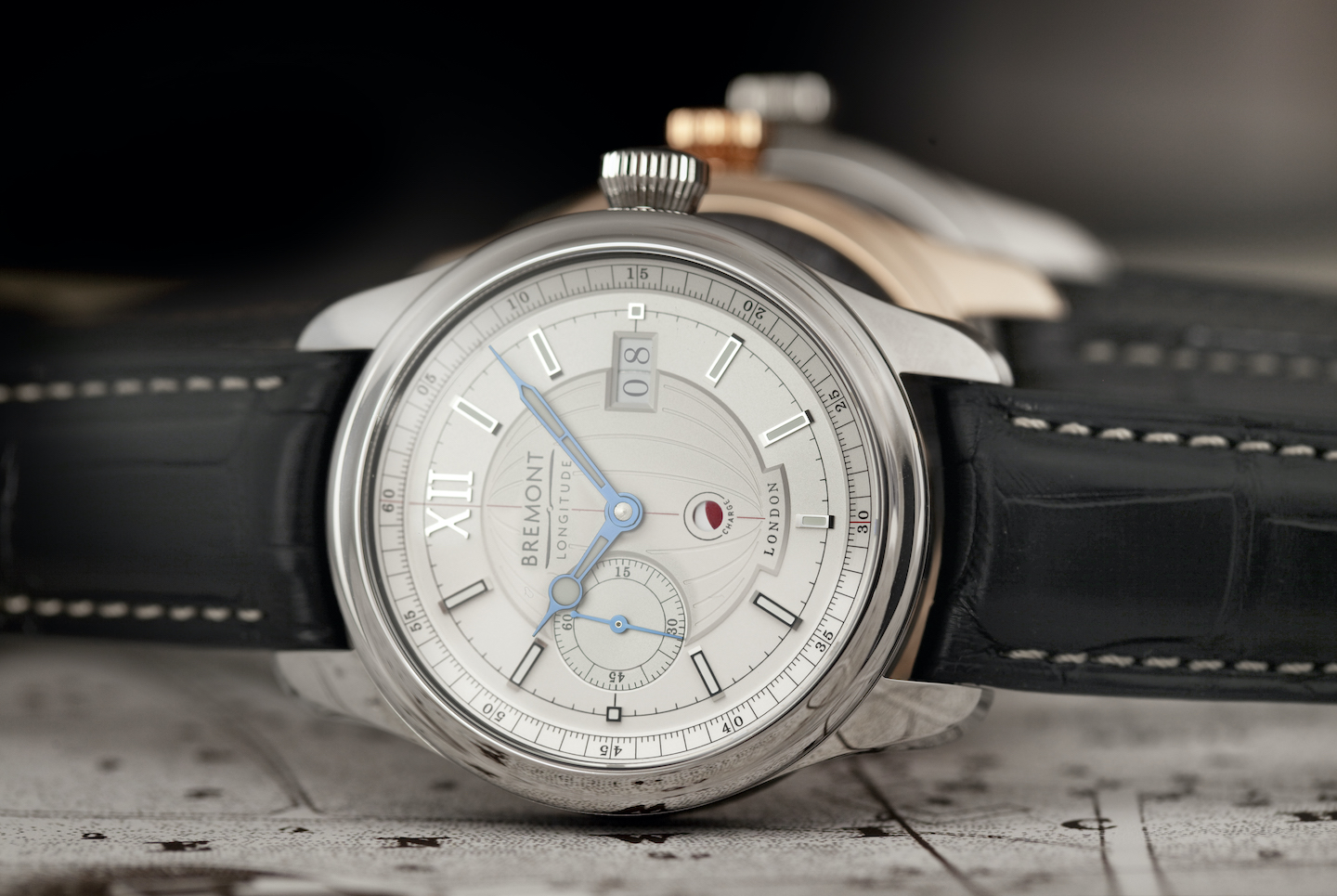 This Bremont Longitude Collection watch is crafted in 18-karat white gold and just 75 pieces will be made.

Bremont is no stranger to the concept of incorporating a part of history into its watches. The brand has brought sail cloth into its timepieces and even, with the Wright Brothers collection, included a piece of the plane’s wing in the watch. Now, for the Longitude LE collection, created in partnership with the Royal Observatory in Greenwich, the watches each incorporate a tiny piece of the brass that comprises the historic Flamsteed Meridian Line (crafted in brass)   found at the Royal Observatory in Greenwich, London – the prime meridian of the world, Longitude 0, 0, 0. Prime Meridian has stood as the mainstay for all timekeeping and longitude designations for hundreds of years. The brass forms a ring visible via a transparent case back that is engraved with the serial number of the watch.

Each watch is 40mm in diameter sand boasts Bremont’s exclusive Trip-Tick® construction with a scratch-resistant PVD treated case barrel. This is a signature of the brand, which produces rugged precision instruments for military associations around the world and watches in conjunction with the famed Martin Baker ejection seat company. The Longitude watches offer subsidiary seconds indication, a 65-hour power-reserve indication on the dial front that resembles the Royal Observatory Greenwich’s red time ball, and a big-date function in addition to hours and minutes. They also boast “London” on the dial and are finished with a classic alligator strap. 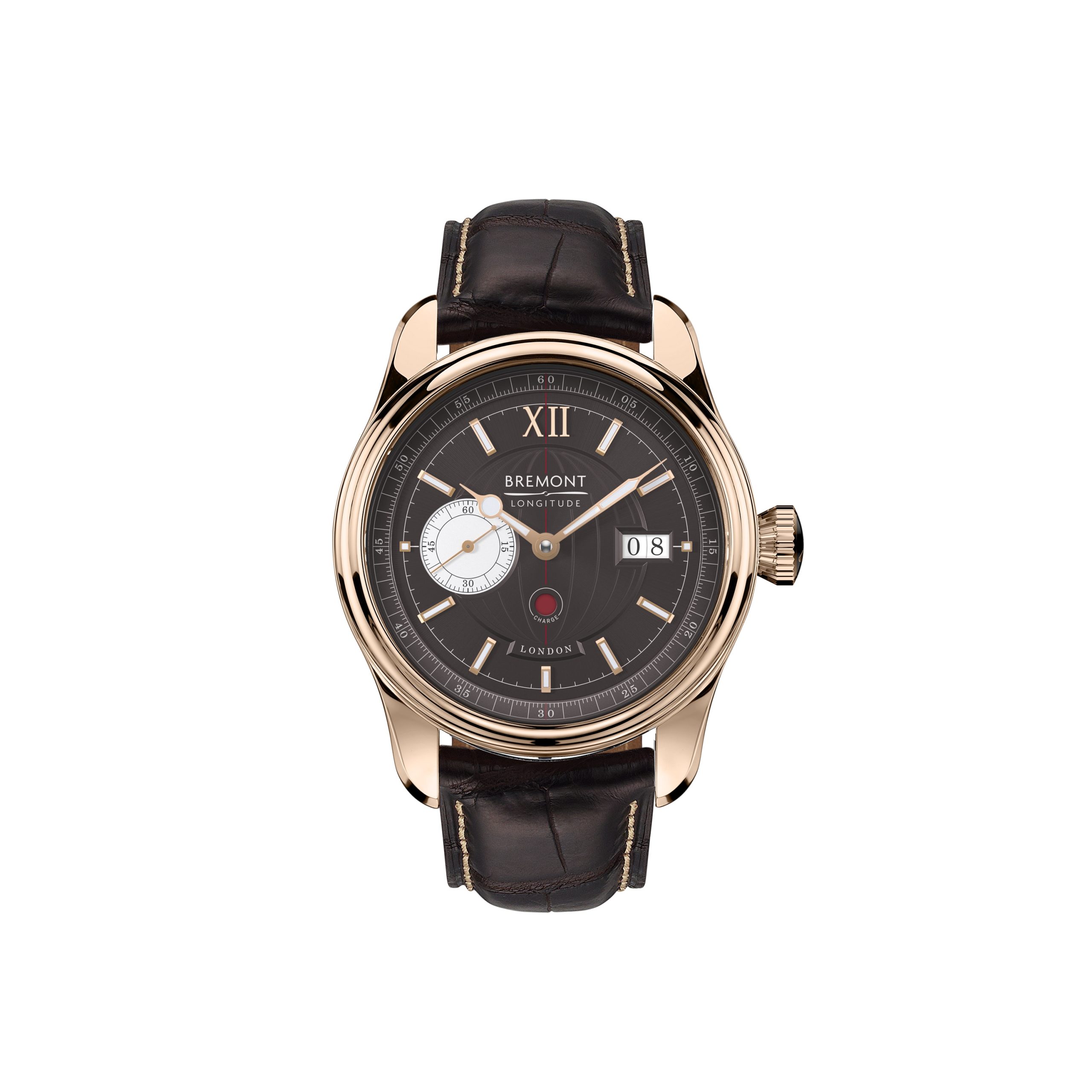 Just 75 of the 18-karat rose gold version will be made.

The new Longitude watches are made in limited editions of 75 pieces in 18-karat rose gold with a dark anthracite dial ($23,995), 75 pieces in 18-karat white gold with a  white gold and silvered white dial and blue hands ($24,995), and 150 pieces in stainless steel with an anthracite dial and nickel hands ($16,995). They are the first Bremont historic timepieces to be produced in the 35,000-square-foot space called The Wing.

In the 1700’s maritime navies suffered incredible losses of life and ships due to the inability to find longitude at sea. Ships ran aground, tens of thousands of people perished and despite rewards and untiring efforts, it took more than 100 years to figure out a system for finding longitude at sea: an on-board marine chronometer clock.  It was the British who are credited for changing history forever and Bremont wants to honor that past with this very special timepiece. 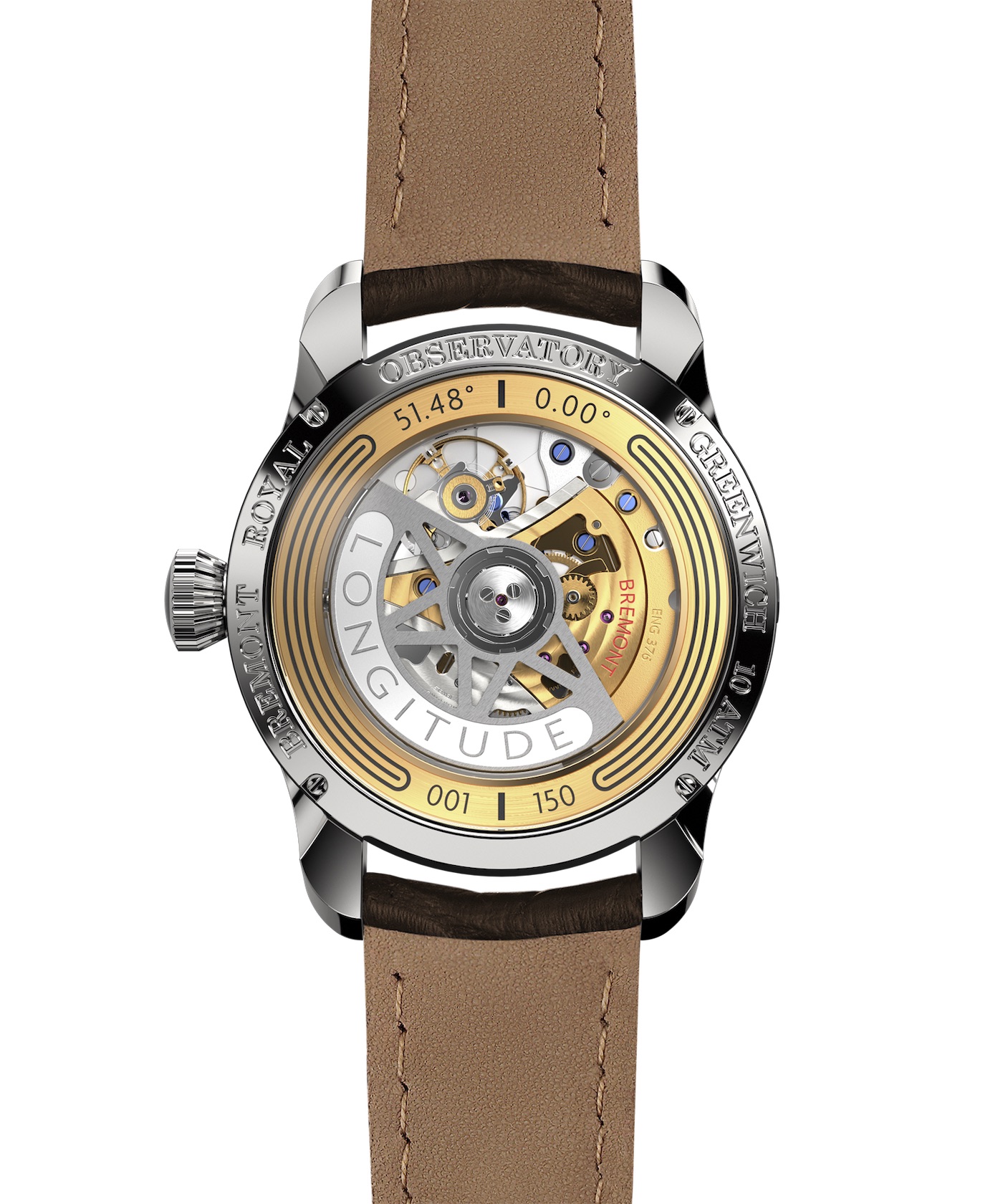 The Bremont Longitude collection of watches houses the ENG376 movement — a 22-jeweld automatic movement with a silicon escapement and accustom balance bridge.

The ENG 300  inside the Bremont Longitude watch

As mentioned, the movement inside the Longitude Limited Edition watches has been predominantly reconstructed by the brand. The resulting ENG376 movement is a 22-jeweld automatic movement with a silicon escapement and accustom balance bridge. A tungsten rotor resembles the brand’s state-of-the-art watchmaking facilities, The Wing. Shock proof and tough, the movement boasts traditional adjustment screws on the free sprung balance wheel in order to ensure higher precision.

Beginning in 2022, the ENG300 series of movements will be certified to chronometer-standards using Bremont’s in-house H1 Timing Standard that reflects the same standards as the ISO3159:2009 Chronometer test.  The brand will test the series movements with finished rotor attached to ensure performance and precision is not changed by adding the rotor later.

“For us to produce this very special watch, the first ever with a Bremont manufactured movement, is incredibly exciting. We will be making a lot of the parts to very fine tolerances, in Henley and in volume. Nobody has made any parts of any watch in volume in this country, especially in terms of the movement, for many decades,” says Nick English. “The Longitude celebrates the return of watchmaking to this country. From the design of the watch to a set of technical drawings, manufacture and assembly of the movement and subsequent testing of the watch and its components.”

To his point, with the movement parts made in Henley and the movement assembled there, as well, this is a leap forward for British watchmaking and comes just 50 years after Roger Smith’s British-made movements and watches established in 1971.

Bremont Co-Founder Giles English adds, “We’ve been working for so many years to manufacture a movement in the UK and this is a massive step towards where we want to be. There’s a lot of growth to go and a lot more we want to do, but this is a monumental milestone. We are very proud of it”.

These IWC Big Pilot’s Watches Will Be Flying Off The Shelves
December 2, 2021