Last month, British brand Bremont announced its appointment at the Official Timing Partner to the 35th America’s Cup and to the defending champion Oracle Team USA.  To many, the announcement was a surprise – as Bremont has been so firmly entrenched in aviation. But, as Giles English, co-founder says, “We grew up in both worlds: aviation and sailing, and it is a dream come true for Bremont to support this famous race of such historical importance.” 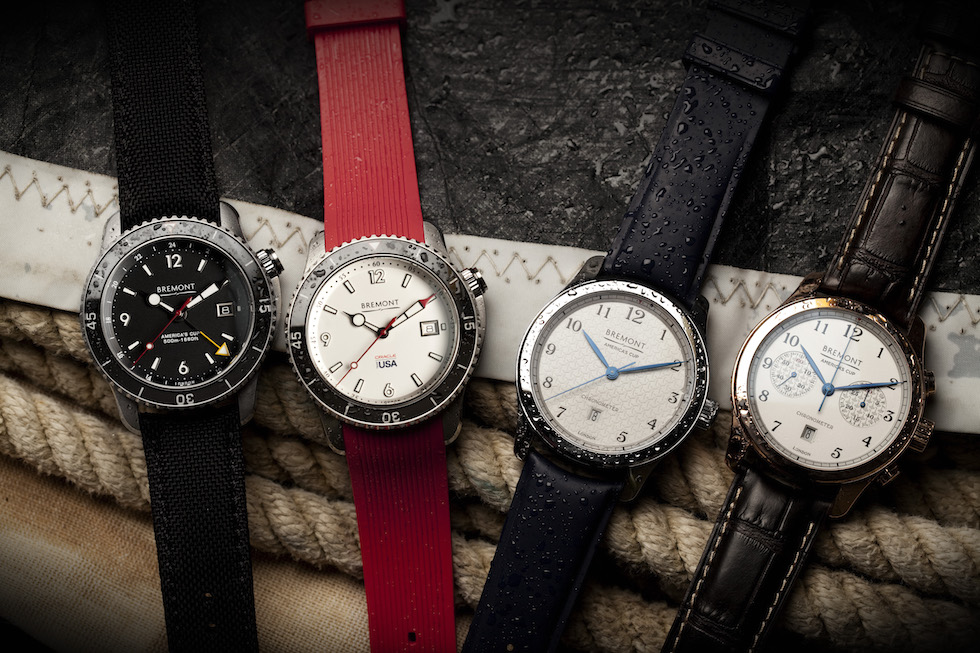 At a big event in New York City this evening,where Bremont officially opened its first USA boutique, the America’s Cup itself, along with key America’s Cup executives, were on hand for the unveiling of the new watches honoring its Official Timing position. While you can read our detailed article about the watches and Bremont’s America’s Cup involvement in our in-depth article on our Perfect Timing column at Forbes.com, here we bring you a look at the timepieces and a perspective of the America’s Cup event throughout history. 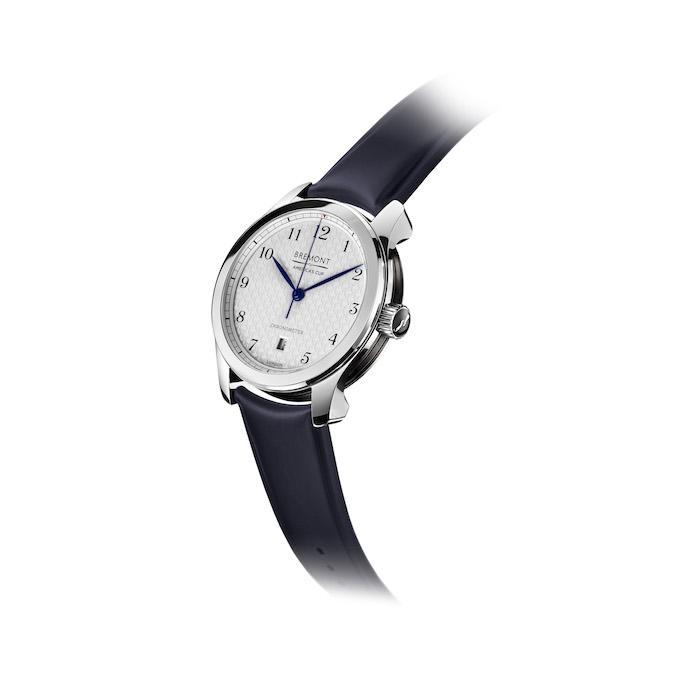 There are two collections surrounding the America’s Cup and Oracle Team USA within this first round of watches. Drawing their inspiration from the J-Class yachts of the 1930’s, the Bremont AC1 and ACII are both released as limited edition timepieces. The ACI chronometer is geared towards classic yacht enthusiasts and features blue steel hands with an ivory opaline dial, with the dial pattern made up of outlines of the Cup. 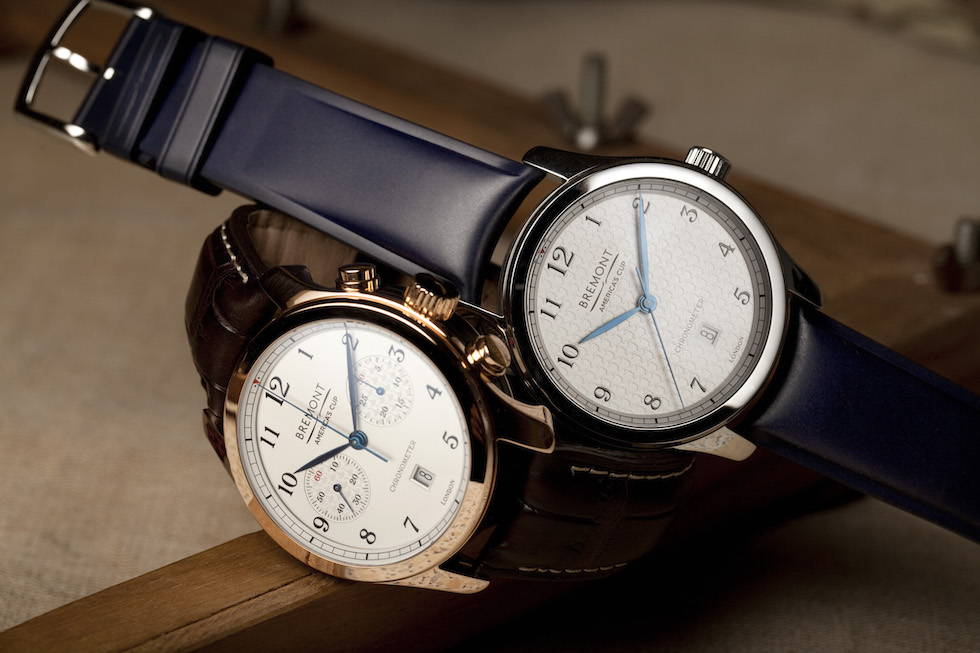 The ACII is a step up from its partner as it is done with an 18-karat rose gold casing and features a chronograph with the motif of the Auld Mug (the America’s Cup outlined on each subdial. The ACII is also powered by a Valjoux 7750-SO BI AC calibre which can also be viewed on the reverse side of the timepiece. 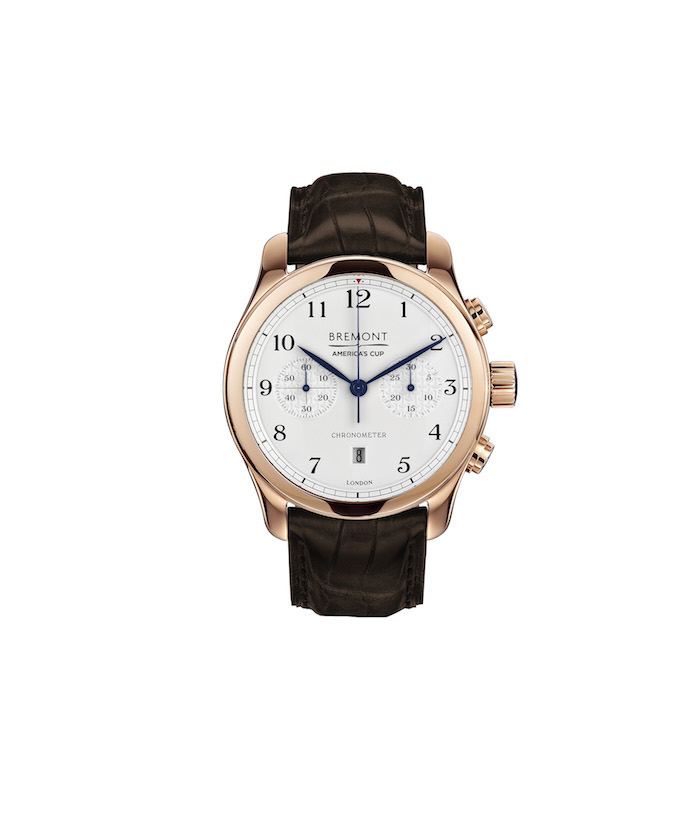 The power monger of the two collections is the Oracle Team USA series of chronometers. The timepieces are an extension of Bremont’s Supermarine line that is water resistant to 500 meters.  The Oracle 1 is powered by the BE-36AE chronometer tested movement with both anti-shock mount and anti-magnetic Faraday cage. 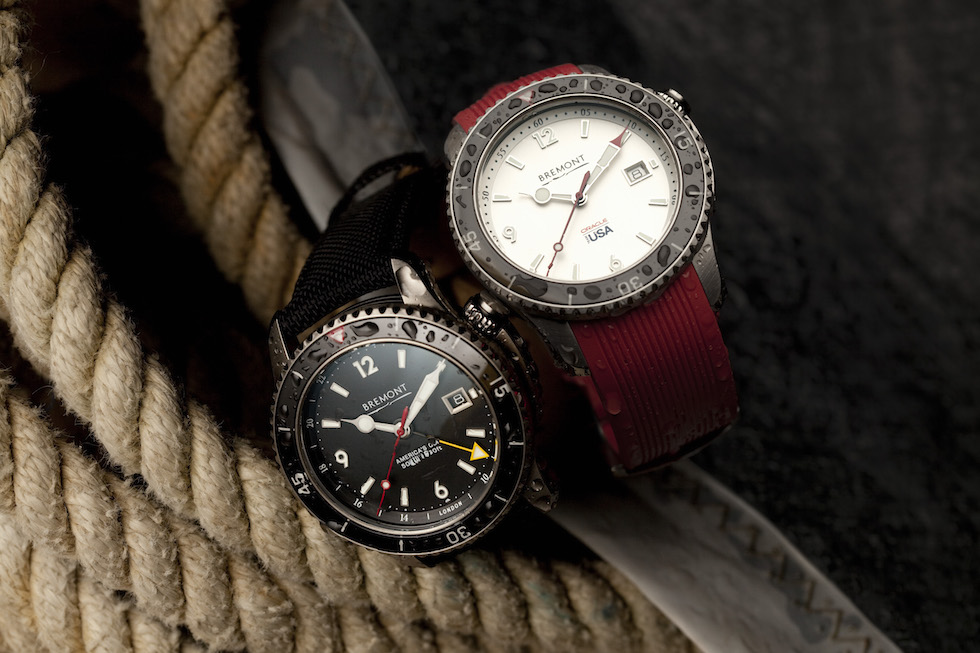 The features and functions of this watch are all neatly packaged in a stainless steel case hardened to more than 2000 Vickers. 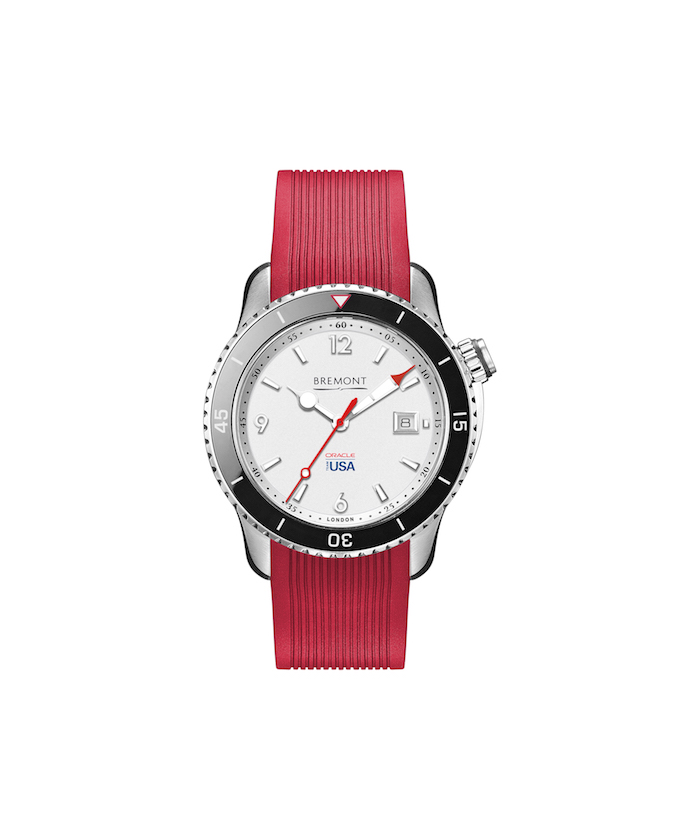 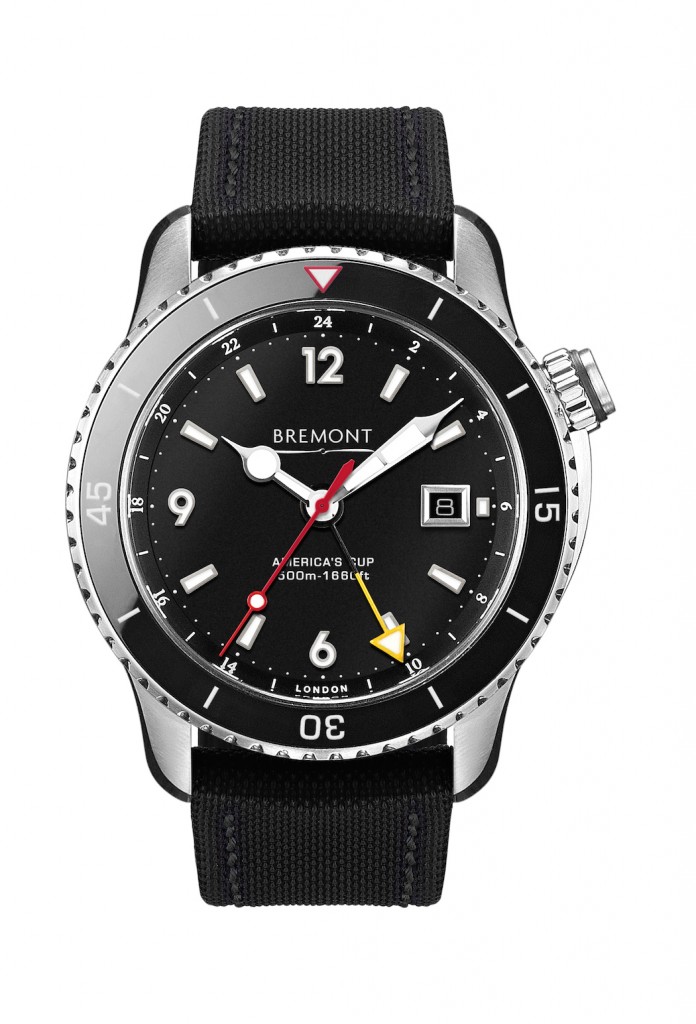 Oracle Team USA skipper, Jimmy Spithill, makes a strong correlation between the worlds of aviation and sailing that come into play with the new high-speed catamarans that fly out of the water like planes. “Where we are now with our sport, there’s a real correlation with the aviation industry and pushing boundaries. We are using very high-grade composites, carbon fiber and super high-grade modulars so there are some really cool connections.”

The America’s Cup holds the distinguished title as being the oldest trophy in international sport having taken place in 1851 on the southern coast of England. However, the tides have changed, and with America having won the past two years, the Cup will now be raced on American waters. The America’s Cup World Series is set to begin next month in Portsmouth, UK. The qualifiers and play-offs will follow suite to lead up to the 2017 final in Bermuda.

Today the America’s Cup is a global event featuring high-tech hydrofoiling, wingsailed catamarans capable of speeds in excess of 40 knots. The crews are elite athletes contending with the great physical extremes of sailing such high performance boats.

The competition was equally fierce in 1851 in a race around the Isle of Wright in England — when an American syndicate brought a radical new yacht to English shores. The schooner, called America, was invited to compete in the Royal Yacht Squadron’s annual Isle of Wight regatta to win the ‘£100 mug’. America coasted home to victory with an eighteen-minute lead. Legend states that Queen Victoria, watching this unparalleled winner cross the finish line, asked who was second. She was told, ‘Your Majesty, there is no second’.

With the winning of that Cup in 1851, the trophy was renamed the America’s Cup after the yacht, and was donated to the New York Yacht Club to be used as a “perpetual challenge trophy to promote friendly competition among nations.” Known as the ‘Auld mug’ — the sterling silver cup (manufactured by Garrard of London). 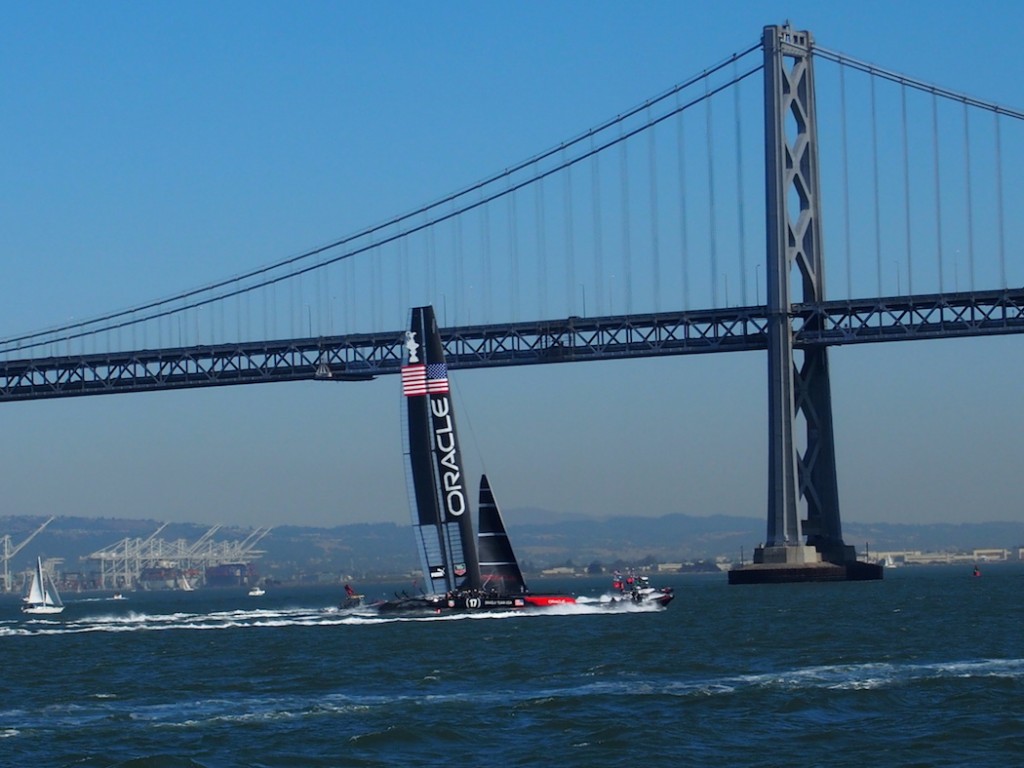 Over the years, growing global interest in the event necessitated the launch of a Challenger series — with the winner going through to race the Defender for the America’s Cup. The NYYC’s unbroken run as Defenders ended in 1983 when Alan Bond’s yacht Australia II used a radical new winged keel to take the Cup for the Royal Perth Yacht Club. The Cup finally left American shores.  The 1980s continued to see rapid advances in racing yacht design. The first fiberglass hull entry in 1987 was swiftly followed by the first multihull when the San Diego Yacht Club’s catamaran trounced Australia’s monohull yacht in 1988. The following decades saw the Cup move hemispheres again, with Team New Zealand and Swiss competitors Alinghi keeping the Cup out of America for 15 years. In 2010, and again in 2013, Oracle Team USA won the event. 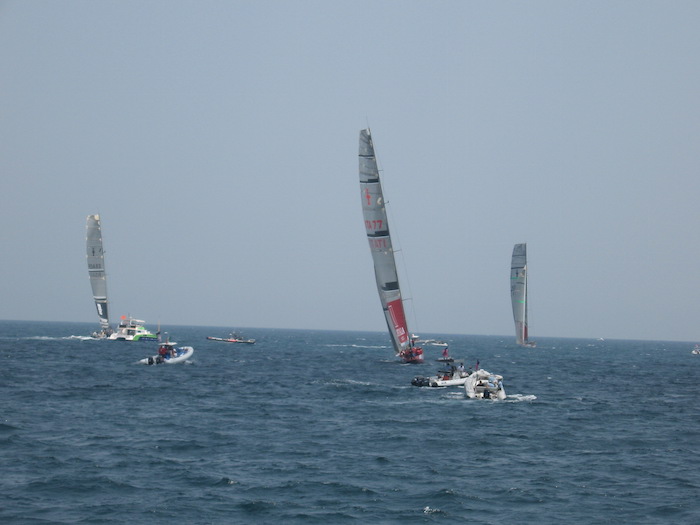 The 35th America’s Cup will be fought in Bermuda with high-speed hydrofoiling AC48 catamarans and defended by ORACLE TEAM USA. Before that, however, international teams will compete in the Challenger series to determine the ultimate square off. Challengers include Team France, Sweden’s Artemis racing, Emirates Team New Zealand and new competitor Softbank Team Japan. Additionally, there is a new British challenger: the Ben Ainslie racing (BAR) team. Sir Ben Ainslie, the most successful sailor in Olympic history, sailed to victory as ORACLE TEAM USA’s tactician at the 34th America’s Cup. His team hopes to return the trophy to Great Britain for the first time since 1851. It should be an incredible competition.

Introducing The Vacheron Constantin Year Of The Rabbit Watch
June 23, 2015