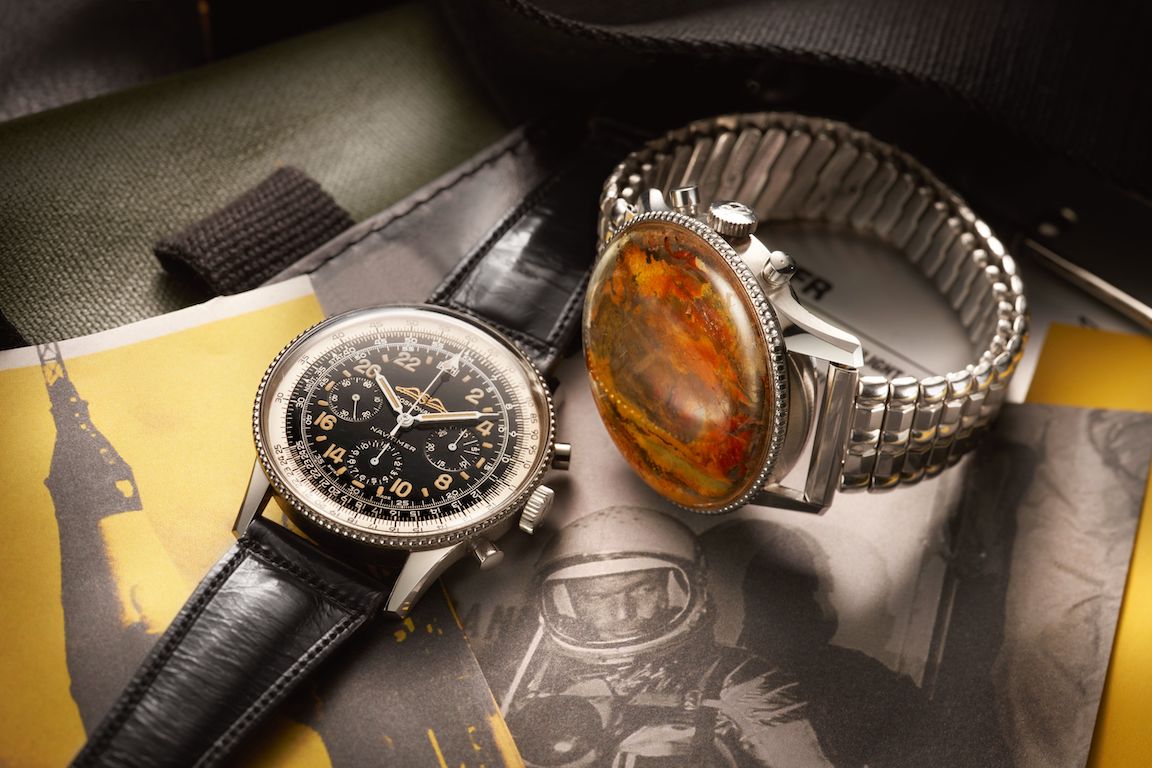 Historical Navitimer Cosmonaute from 1962, and the first Swiss wristwatch in space worn by Scott Carpenter during his MA 7 mission, alongside the new limited edition Navitimer B02 Chronograph Limited Edition Cosmonaute.

Breitling does it again. Just last week, the brand mades a huge statement about its heritage and watchmaking prowess at a space-themed event in Zurich. Not only did the Swiss watch brand release an all-new beloved Cosmonaute watch, but also it is recalling its rich aviation history for this release. The new timepiece recalls the watch worn by American astronaut Scott Carpenter in a space mission in 1962. Additionally, to set the tone for the release event, Breitling even brought the original watch worn by Carpenter (and fairly well destroyed in the seawater landing) to the forefront for the first time since the mission. 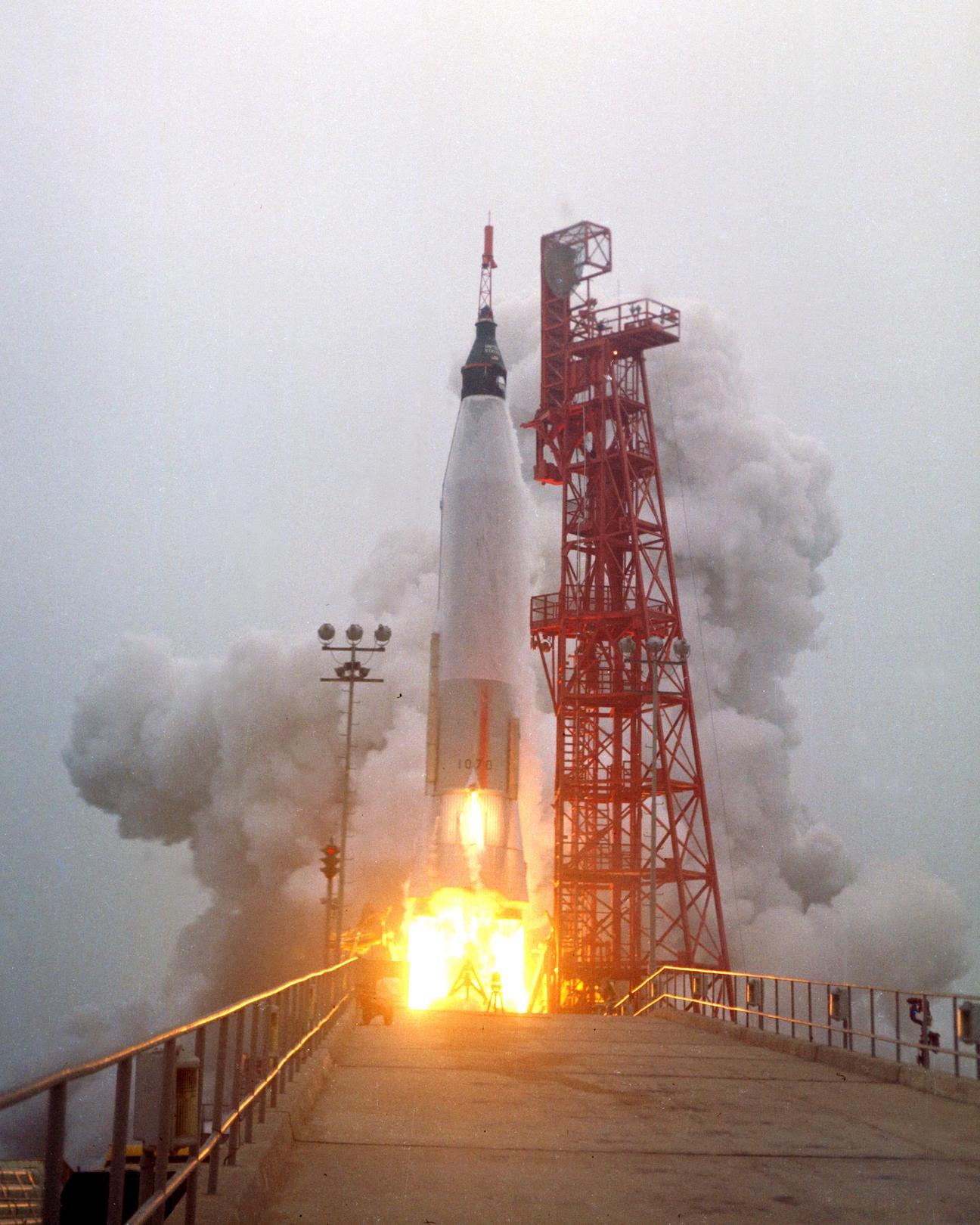 In the 1960’s when the world is in a space race, with various countries competing to be first in space and first on the moon, a similar race was taking place on Earth in the world of wristwatches. Watch brands were vying for room on astronaut’s and cosmonaut’s wrists.

In America, NASA was testing watches  — for durability and precision in the face of gravitational forces, sudden pressure and temperature changes and more — from a host of the best brands to determine which watch would be the official space watch. Meanwhile, brands everywhere were finding their way into the programs. Breitling was one such brand. 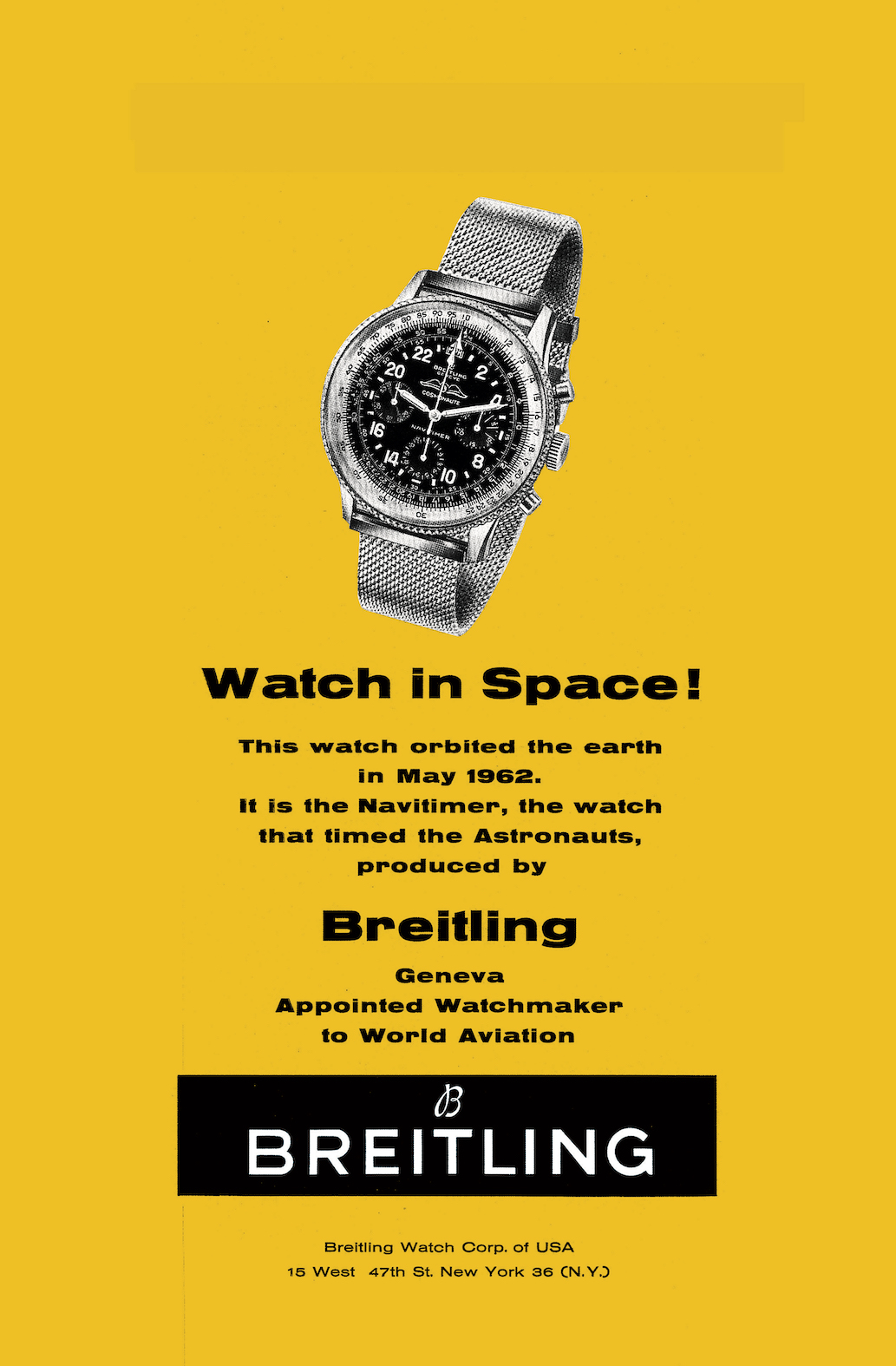 The Breitling Navitimer Cosmonaut watch made its debut to the world in 1961 and was made according to strict specifications for aviation and space needs.  Not too long afterward, on May 24, 1962, American astronaut Scott Carpenter skyrocketed into space on the Aurora 7 spacecraft, wearing a specially made variation of the Breitling Cosmonaut watch on his wrist. It featured a 24-hour dial so he could determine day from night in space. Previous watches in space were a Swiss pocket watch with a strap, and a Russian wristwatch – a distinction Breitling is keen to make.

As such, Breitling has the distinction of being the first “Swiss wristwatch in space.” When the Cosmonaut watch was available for general sales in 1962, it kept the same specs as the watch Carpenter wore. 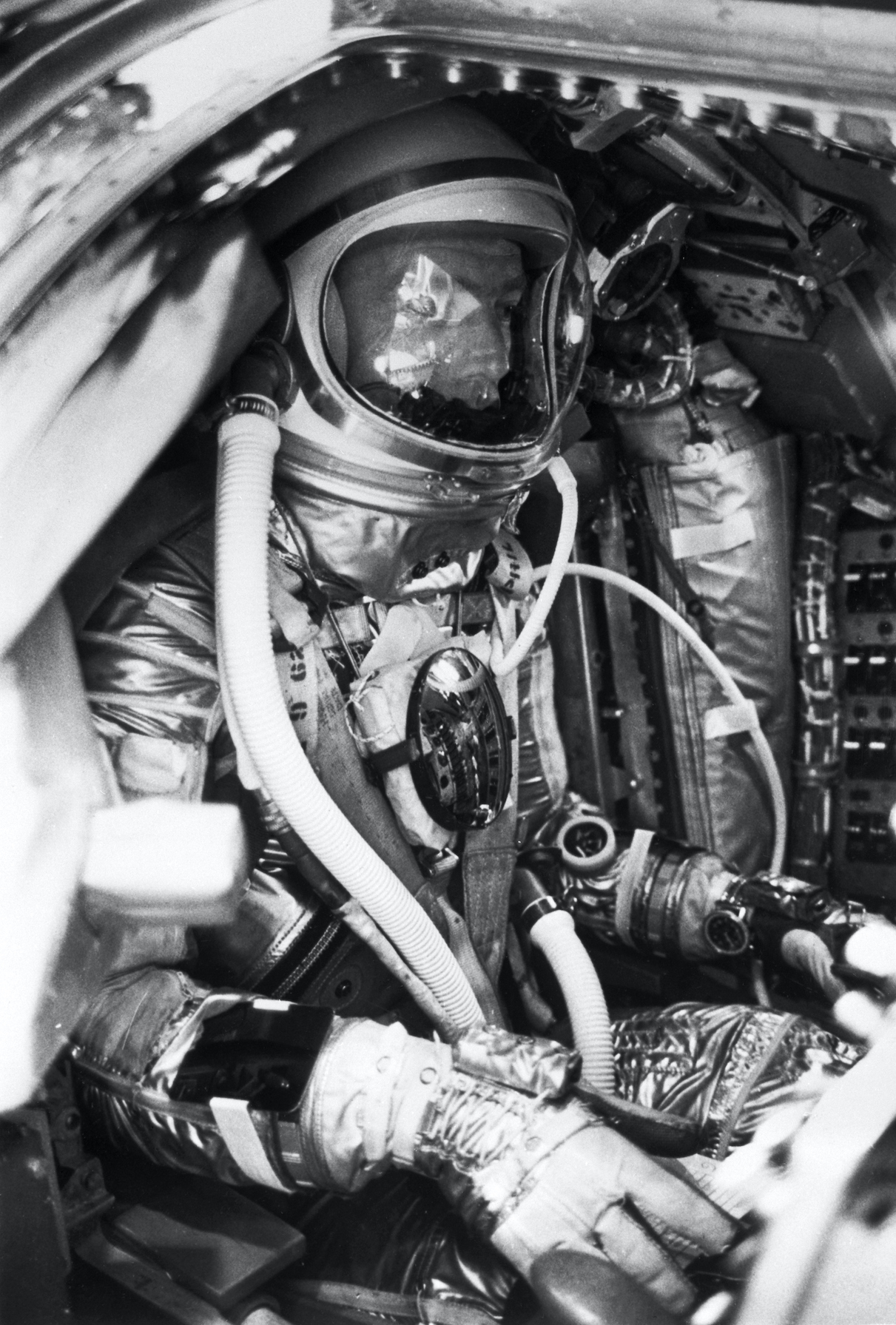 Cape Canaveral, Fla.: Scott Carpenter lies on his back in the contour couch inside the Aurora Seven Mercury Space capsule atop an Atlas rocket. Carpenter was inserted into the capsule, strapped down, and the capsule sealed for launch. A haze on the ground forced a prolonged “hold” in the countdown, but launch appeared certain.

The  Mercury 7 spaceflights were the first human-crewed flights and in the fourth such mission where Carpenter wore his Breitling, the Mercury-Atlas 7 mission, he orbited the Earth three times – a huge achievement for the era. He was just the sixth human being to fly in space.

After the orbits, the Aurora 7 space capsule safely splashed down in the Atlantic Ocean, but the recovery mission took three hours, during which time the watch was exposed to constant seawater and was damaged. Breitling replaced Carpenter’s watch and kept the corroded model – a piece of space history – for its archives. Now, for the unveiling of the commemorative watch, Breitling brought the origin watch out of hiding and showcased it alongside the new piece. 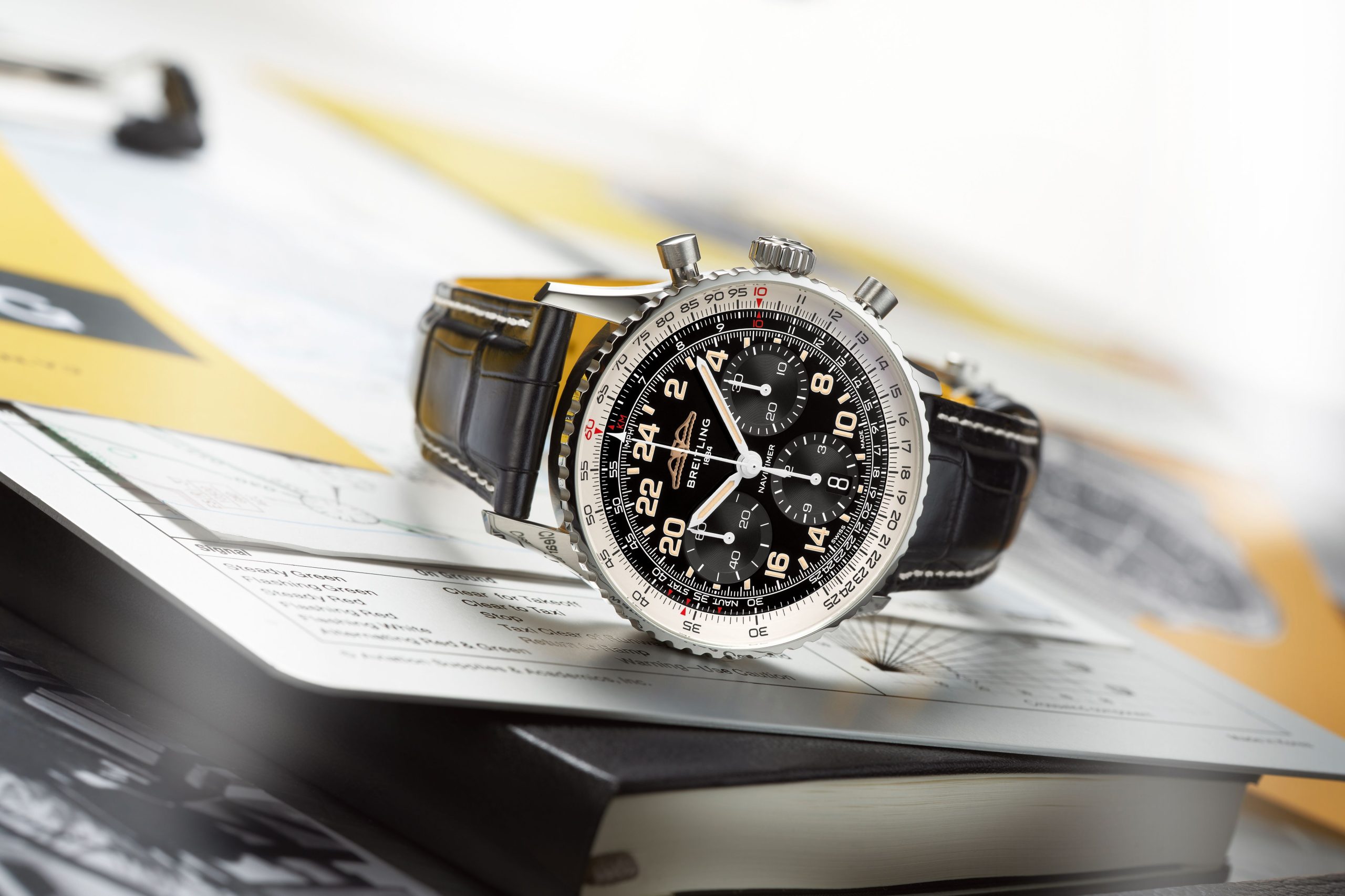 Now, in honor of the 60th anniversary of that space flight, Breitling unveils the Navitimer B02 Chronograph 41 Cosmonaute Limited Edition COSC-certified chronometer watch. Paying homage to the original that Carpenter wore, the looks are incredibly similar, but with updated tweaks.

The watch, with circular slide rule bezel designed to help pilots  make mathematical calculations for fuel, flight times and more, retains the 24-hour time indication, and offers a column-wheel chronograph. It measures 41mm in diameter and is crafted in stainless steel. It boasts a platinum bezel (unlike the original) and a rich black dial with the Aircraft Owners and Pilots Association  “wings” logo on it. It is offered with either a black alligator strap or a seven-row steel bracelet. 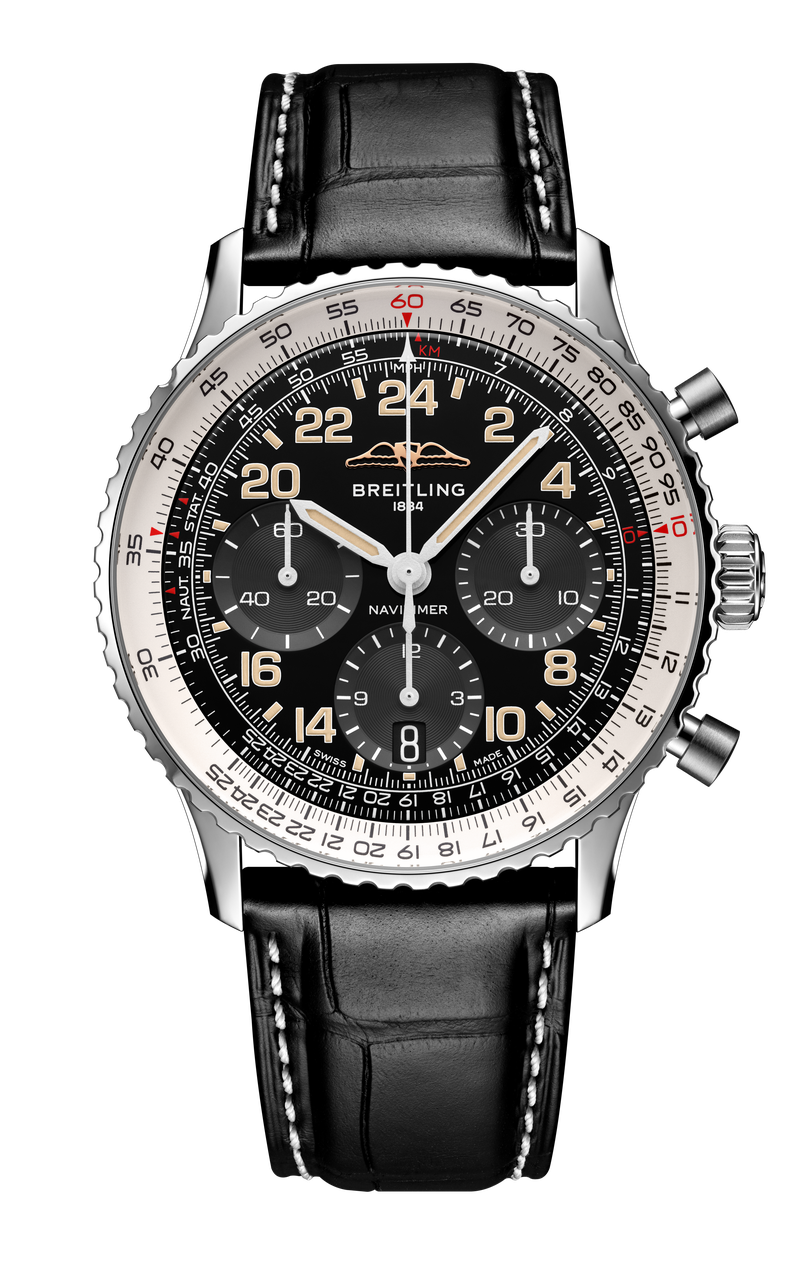 The case back is engraved with several tribute elements, including the date of the Aurora 7 mission, the words “First Swiss wristwatch in space”, and the watch’s number, since each of the 362 watches is numbered. The transparent sapphire back allows for a view of the in-house-made mechanical hand-wound Breitling B02 movement, with its bridges engraved with “Carpenter,” “Aurora 7” and “3 orbits around the Earth.” The watch  is created in a limited edition of 362 pieces (a nod to the three orbits around Earth and the year 1962) and retails for $10,800 on strap and $11,200 on steel bracelet. 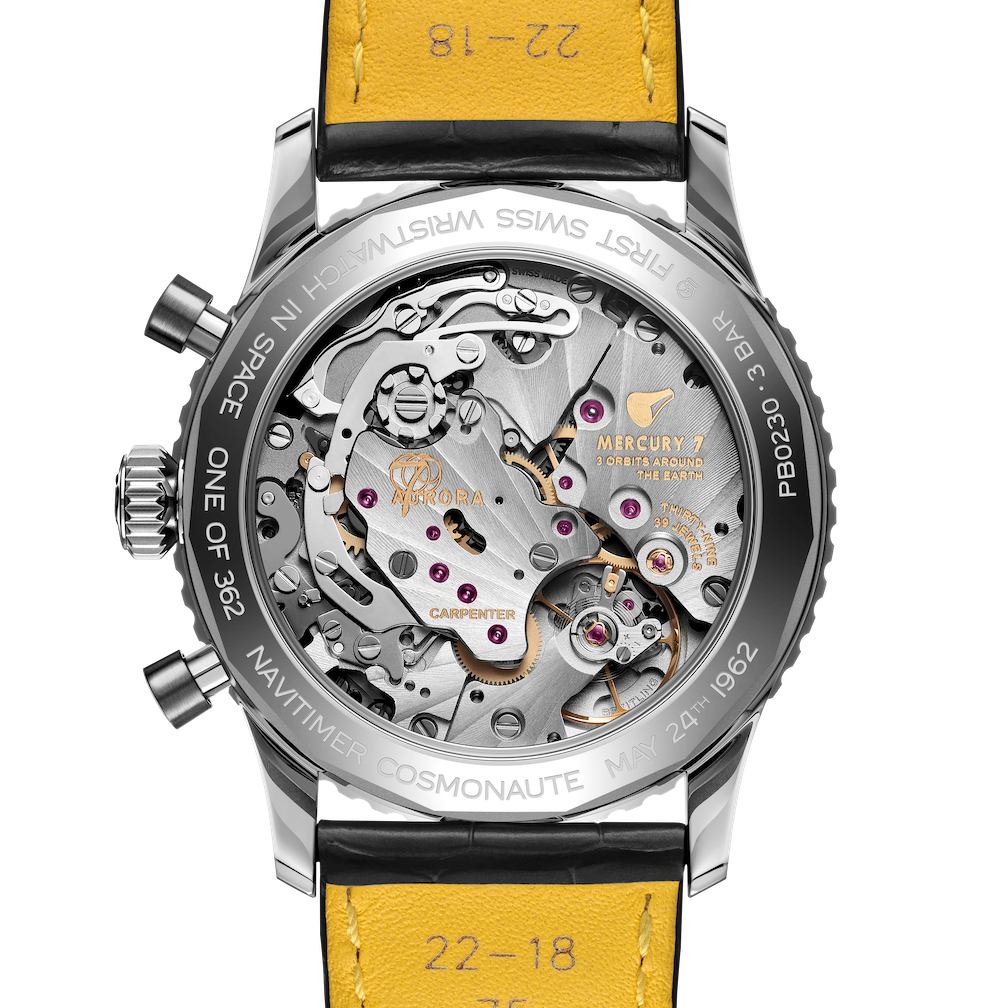 The case back of the Breitling Navitimer Cosmonaute Limited Edition watch has several engravings that recall the 60-year-old mission.

Joining Breitling at the event was  former NASA astronaut Scott Kelly and also on exhibit was a Cosmonaute once owned by astronaut John Glenn and acquired at auction in 2019 by Gregory Breitling.

“When we introduced the redesigned Navitimer earlier this year, a question on everybody’s lips was, ‘What about the Cosmonaute?’ Today, I’m thrilled to finally announce two Cosmonaute reveals: the first-ever public viewing of the watch Scott Carpenter wore into space, and a 60th-anniversary limited-edition timepiece that pays tribute to its history-making forerunner,” said Georges Kern, CEO of Breitling.