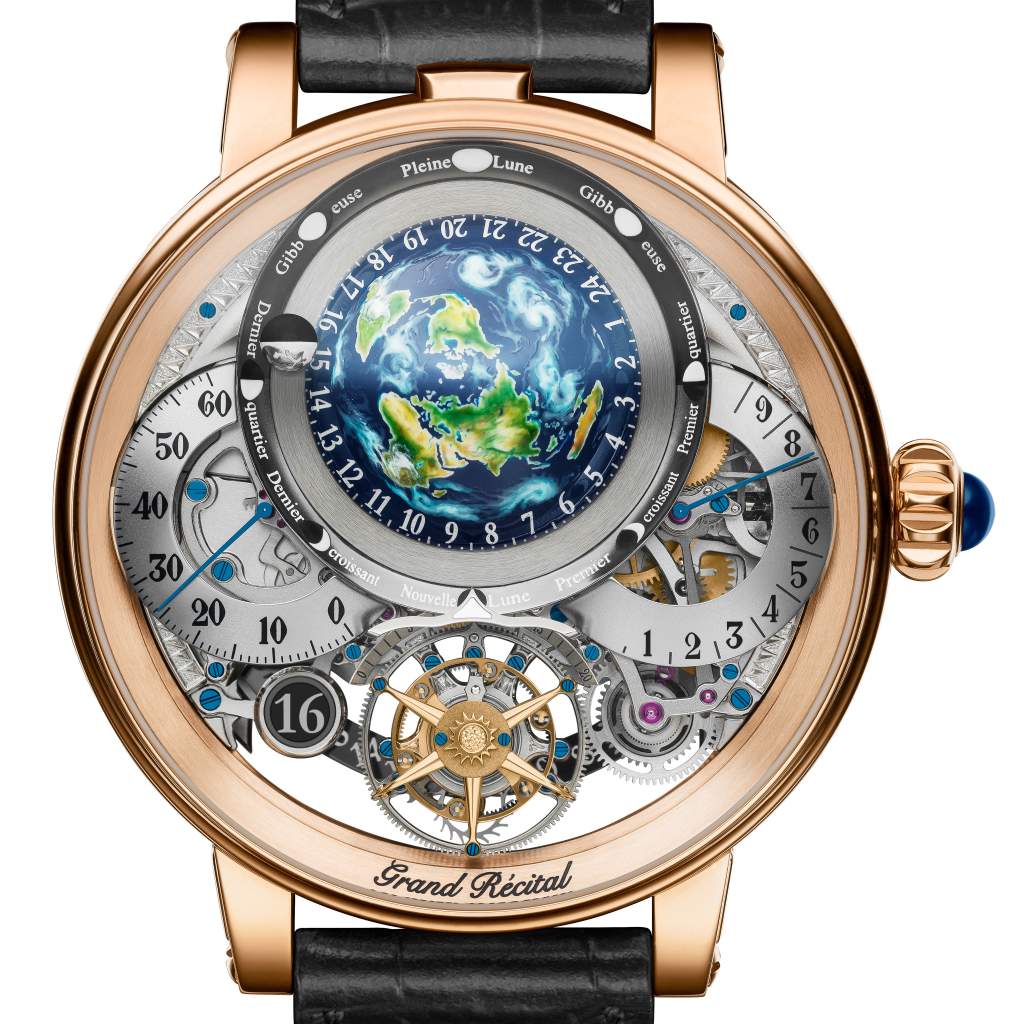 “The Récital 22 Grand Récital tourbillon forms the third chapter in the poetic celestial watchmaking narrative begun by Pascal Raffy and the Maison’s artisans at ovet 1822 two years ago. Together, they now invite us to observe the three heavenly bodies that set the pace of our lives: the sun, earth, and moon. This grand astronomical theater has been presented by Bovet in a Tellerium-Orrery, with the sun represented by the flying tourbillon, whose carriage bridge evokes fiery rays. The striking hemispherical earth rotates on its own axis and shows the hours on a natural 24-hour cycle. Finally, a spherical moon orbits the earth according to the exact length of its synodic period, i.e. 29.53 days.

To accentuate the splendor of the sun, the tourbillon carriage has been raised above the surface of the movement. Its original patented construction is characterized by its central attachment, endowing the piece with exemplary chronometry, while achieving a peerless level of transparency. Meanwhile, the five arms of the titanium carriage bridge surround the regulating organ. This three-dimensional representation of the sun showcases the finish of the bridge’s five arms, rounded by hand, which subtly frame the timepiece’s celestial decoration. By rotating once every sixty seconds, the tourbillon indicates the seconds by a hand affixed directly to the carriage wheel and travels over a scaled twenty-second sector.

The earth is represented by a hemisphere on the Récital 22, the surface of which is adorned with an engraved and hand-painted map, on which the oceans, mountains, deserts, and forests are executed in painstaking detail. The difficulty of working on a hemispherical surface is compounded by the use of a technique unveiled by Bovet in 2017, in which the artisan incorporates luminescent substances into the miniature painting. In this way, the earth becomes a radiant highlight in the dark, as the earth itself appears in the heavens above. The artisan’s work continues with extreme delicacy, applying several successive layers of transparent lacquer to the globe’s surface before it is polished. To enhance the sense of realism, the artist painted clouds and air currents onto the globe’s surface. As they are separated from the earth’s crust by the thick layers of lacquer, the clouds appear to be floating in mid air. As in reality, the earth naturally performs one anti-clockwise rotation every 24 hours. At the base of the globe, a graduated scale displays the hour by means of a three-dimensional polished titanium hand, situated between the tourbillon and the globe.”