By Gordon Henderson and Roberta Naas 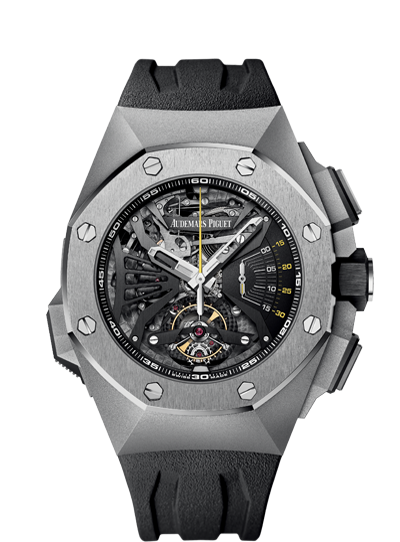 Two incredible things happened at the SIHH 201 as it relates to Audemars Piguet. One of them, we will write about soon enough, but the other revolves around the  Royal Oak Concept Supersonnerie. Let’s start by saying that “Supersonnerie” is an understatement. I was sitting in a small room, while someone had the watch about 25 feet away, down the hall way. He demonstrated the tone and i could hear it, pardon the pun, clear as a bell where i was sitting. I heard the crystal clear, melodious sound even more clearly than i have ever heard any chiming timepiece, even when in a sound booth designed to give off the largest amplitude.

How did the brand achieve such an incredible feat? the answer is more than nine years in the making — but let’s start with the notion of  “concept” watches. When the word ‘concept’ is used as a qualifier for a new product, you typically think of sports cars pushing the limits of land-based speed, or of an aircraft pushing the limits of maneuverability and aerodynamics. To hear the word concept typically presumes that the innovations used in the creation are so far advanced that the it will never see commercial production. The word ‘concept’ is pretty charged, and the release of the Audemars Piguet Royal Oak Concept Supersonnerie doesn’t let the nomenclature down.

The Royal Oak Concept Supersonnerie is a horological innovation that pushes the boundaries and sets new benchmarks. The push to innovate was seen last year with the Royal Oak Concept RD#1 watch, that took eight years and a team of engineers, experts in stringed instruments  and top watchmakers to bring it to fruition. The work and technological advancements led to three patents, and, as with all things technology, Audemars Piguet is now able to build off of last year’s work but in a stronger sense and for public purchase. 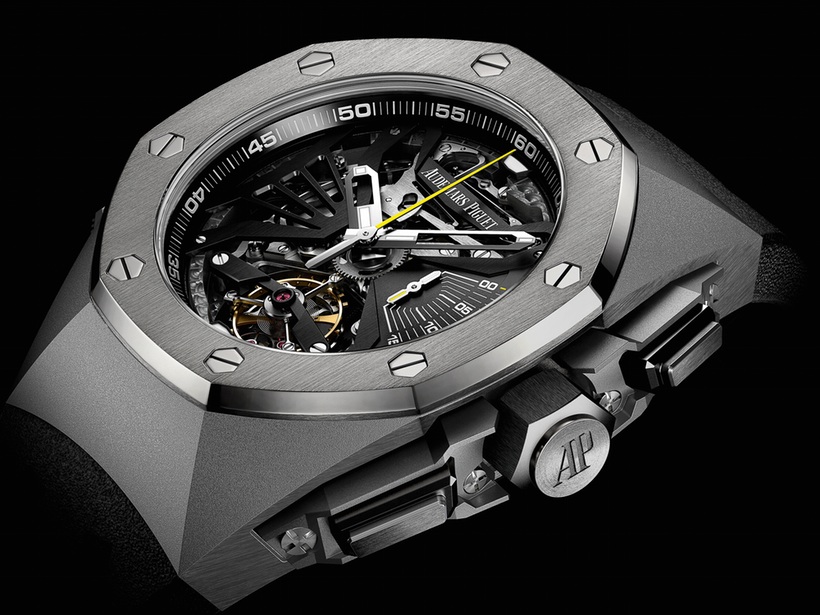 Stylistically, the Supersonnerie is visually similar to last year’s Acoustic concept, but with the addition/change of the coloring elements going from orange to yellow and with a few tweaks. This is the production piece the horological world was uncertain they would ever see.

Powered by the manually wound calibre 2937, a 42 hour power reserve, and composed of 478 parts, the watch is a minute repeater tourbillon chronograph tour de force. It features a 30 minute chronograph with retrograde indicator at the 3 o’clock position and a tourbillon at 6 o’clock. It comes in an ultra light weight 44mm titanium case and is made with sound as the focal point. Whereas in most minute repeaters, owner and onlookers must huddle around the chiming watch, ears pressed close enough to the watch and everyone hushed, to hear the melodic chimes produced by the piece. Not so with the Concept Supersonnerie.

The incredible sound is made possible via  a new case construction that offers louder, clearer tone. The case back features openings or apertures  that work as resonance chambers to help amplify sound. Additionally the piece uses a new mounting system and alternating gong strike to get the most sound as possible out of the piece. 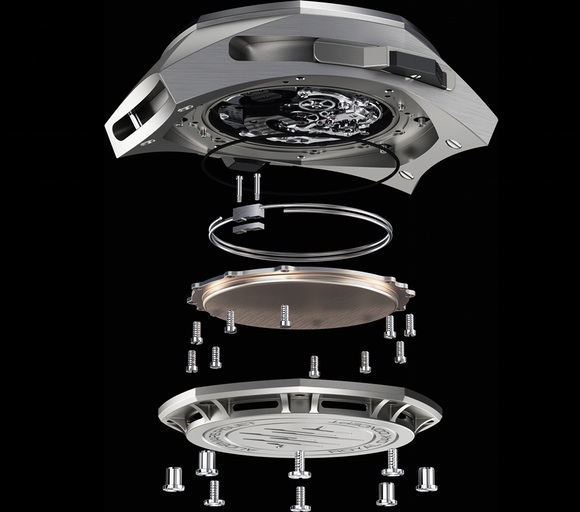 The case construction, which holds a patent, has been totally reconfigured and includes a soundboard and special casebook with apertures

Usually in a repeater, the gong is fixed to the maniple of the movement and then connected to the case. In this watch, the acoustics are all together in a separate caseback with a sound board that has the gong attached to it. We had the opportunity, in a demonstration room set up by Audemars Piguet at the SIHH, to witness the sound accomplished by the new design and construction of the watch.

Essentially,  Audemars Piguet has removed the sound components and isolated the “instrument” from the rest of the watch. With this system,  there are no vibrations as one typically gets when the mechanical component is on the maniplate of the watch. Naturally the alloy (with some copper in it)  that comprises the soundboard is proprietary. The brand holds a patent on the case construction.

There has also been an exacting amount of detail paid to the volume, pitch and quality of the melody produced by the piece. The gongs, which are patented, are traditional, crafted in steel, but Audemars Piguet has changed the process, computing the behavior of the gong with regard to intensity and tone, to produce a specific tone. 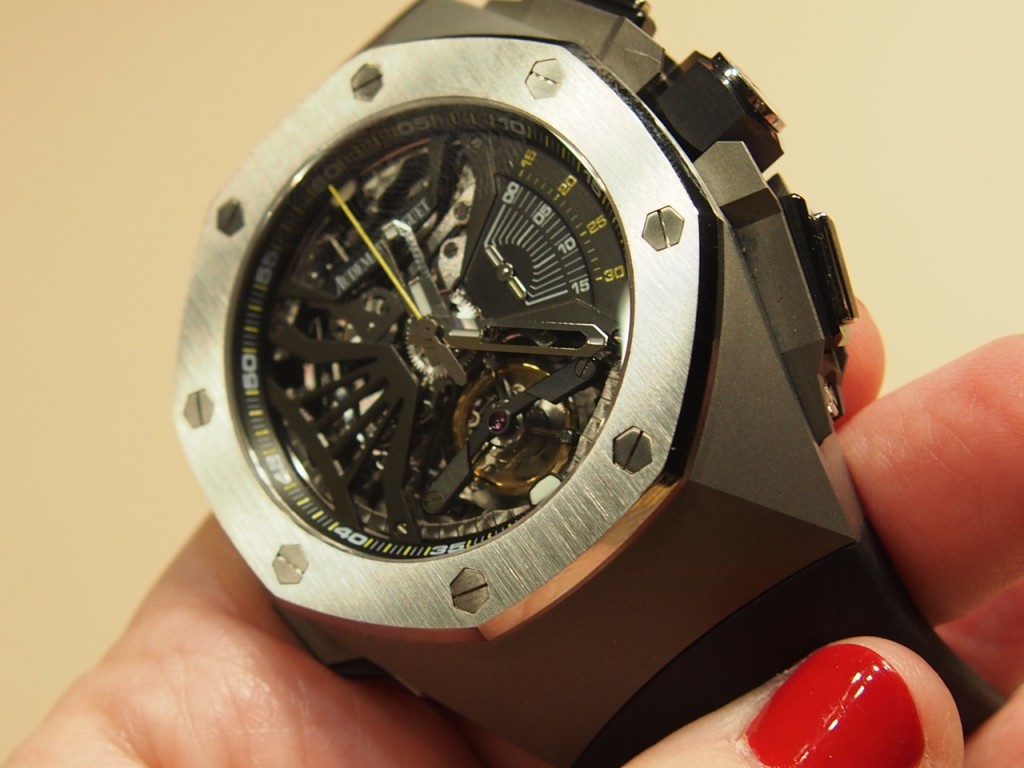 The sound that emanates from this watch is groundbreaking in terms of volume, clarity and tone

Audemars Piguet has also adjusted the speed, or tempo, of the sound. Again, the new governing system of the sound is patented.  It deals withe the speed with which the  hammer comes back after hitting the gong: a fast speed reduces any opportunity for drag or lingering tone– meaning greater clarity.

In short, every single aspect of this new Royal Oak Concept Supersonnerie has been carefully re-created by Audemars Piguet and a complete team of scientists and engineers (not to mention sound specialists) who worked side by side to create a sound that can be heard a room away. Just 50 pieces will be produced, each retailing for $597,400.

Check out the Audemars Piguet video that highlights the grondbreaking nature of this watch.

Construction: Inner sealed sound board and case back with apertures for sound enhancement.