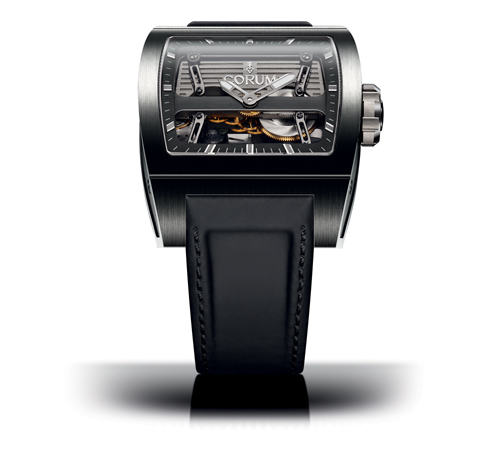 The top watch brands are bringing inventive calibers to the forefront here at BaselWorld. Such is the case with the new Corum Ti-Bridge Automatic Dual Winder.  The linear architecture of the movement is consistent with the collection, but the new Dual Winder system in this CO207 automatic caliber features two interconnected inline oscillating weights. This patented world-first system was designed and developed in house by Corum.   The two inline-mounted circular weights move in parallel and are efficient in both directions thanks to a ball bearing device and ball bearing clutches. A single barrel at 3:00 stores the CO 207 caliber’s 72 hours of power reserve.  The movement is held in place by four titanium cross bars, giving the illusion of a suspended mechanism. The watch is also crafted in a titanium case that is slimmer than its predecessors. It is made in a limited edition of 200 pieces in titanium, and 25 pieces in 18-karat rose gold.