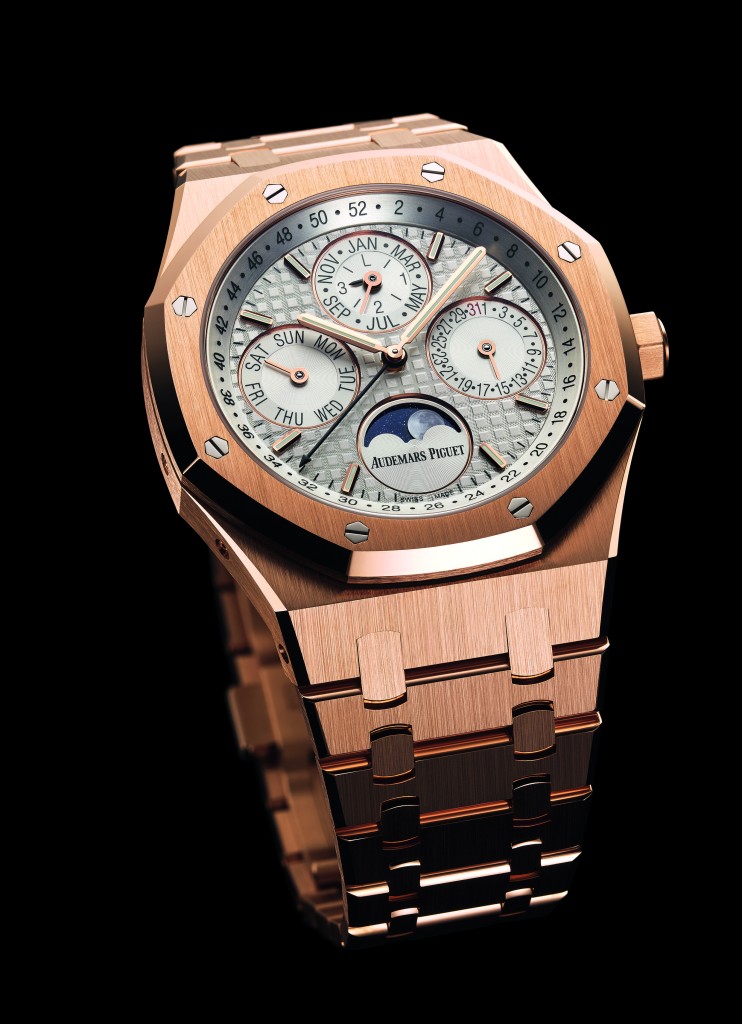 Perpetual calendars are a much-coveted complication amongst watch collectors. They have also been a part of the DNA of Audemars Piguet for decades. Before we tell you all about that legacy, we want to introduce you to the new

2015 Royal Oak Perpetual Calendar ultra-flat watch. A work of art, balance and craftsmanship, the timepiece is offered in four versions: two each in gold and steel. But it is not the different models that will blow you away; it is the elegance and precision that will have you wanting one on your wrist.

The 41mm watch offers astronomical moon indication — laser micro-structured and laid on the aventurine dial – that is so precise it will not need an adjustment for 125 years and 317 days. In short, it means whoever purchases this watch now will never need to worry about that adjustment in his lifetime. 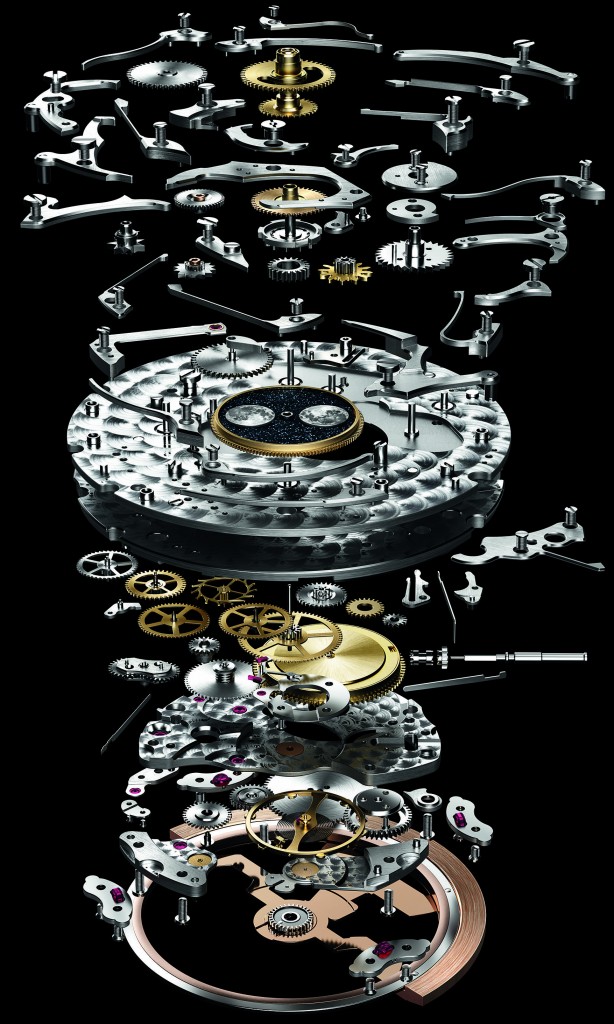 The complex 374-part movement, the caliber 5134, is also an ultra-flat caliber, weighing in at just 4.31mm thick thanks to a suspended barrel that helps keep the caliber thin. The bidirectional self-winding movement offers 40 hours of power reserve. A peripheral ring rolling on four ruby runners to help reduce friction and wear guides the 22-karat gold oscillating weight. The weight is meticulously finished with the brand’s famed Tapisserie motif – or, it can be custom decorated. In addition to the days, date, months and leap years that the watch tracks and displays, it also shows the weeks of the year — indicated on an outer chapter ring, a nice touch for those who need to refer to week numbers in business instead of dates.

As with all Audemars Piguet watches, each finishing operation is done by hand according to the brand’s strict standards of Haute Horology. The suspended barrel features circular Cotes de Genève and the wheels are circular satin-brushed. The mainplate is also circular grained and all bevels are polished. The watches will retail for $60,900 in stainless steel, to $95,700 in gold. 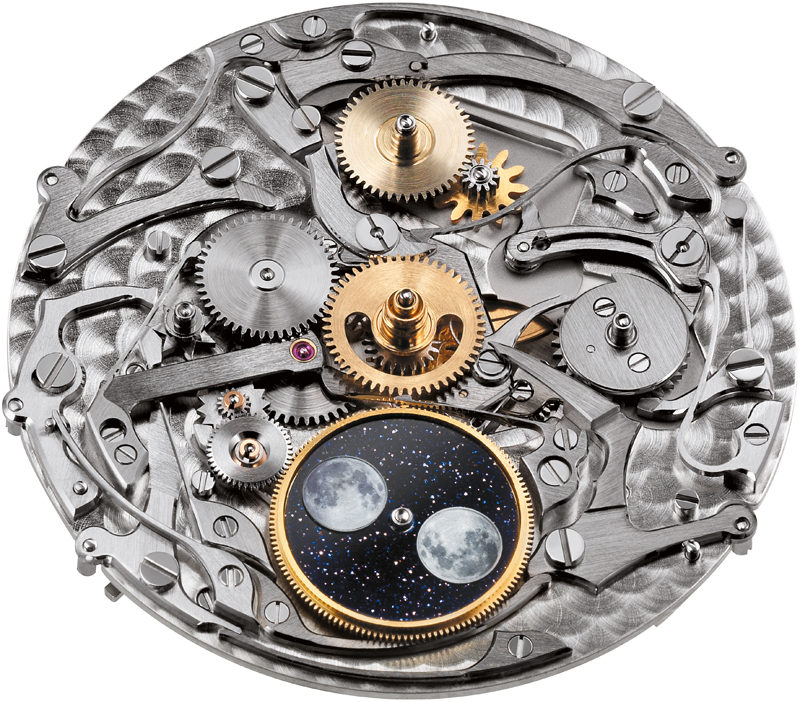 As mentioned, these technically sophisticated perpetual calendar timepieces are part of the brand’s history.   One of the earliest perpetual calendar watches from the brand (which resides in its museum) dates back to before its formal 1875 origins. It was Jules Audemars’ school watch project, an 18-karat gold pocket watch with perpetual calendar, a quarter repeating mechanism, and the rare independent deadbeat second function. 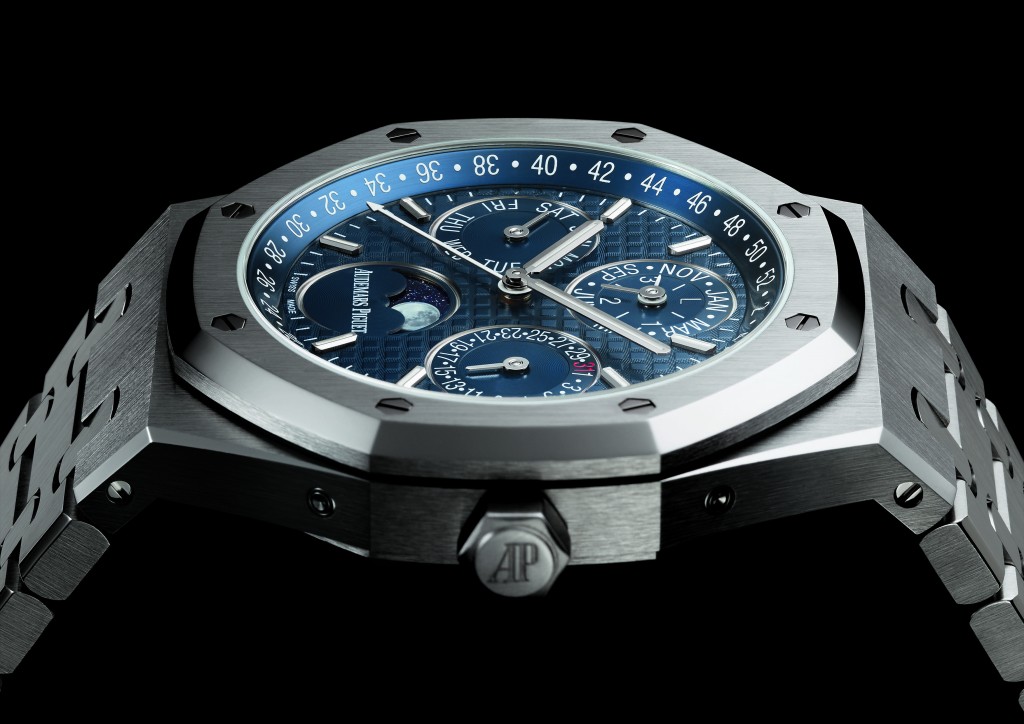 The company again made history with its 1978 release of the then world’s thinnest self-winding perpetual calendar wristwatch. Conceived in secret and developed by master watchmaker Michel Rochat, that groundbreaking watch incorporated the brands 2120 caliber that had been launched more than a decade earlier (1967). The watch was extra thin at 3.95mm.The list goes on and includes the first extra-thin perpetual calendar in the Royal Oak collection (1984), followed by variations in the Royal Oak, Royal Oak Offshore and Jules Audemars lines.