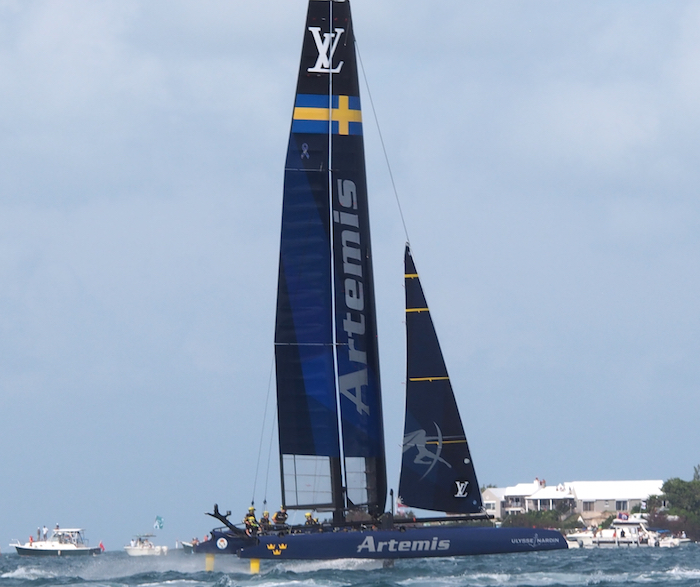 This past weekend in Bermuda six teams raced to the finish in the third Louis Vuitton America’s Cup World Series event leading up to the 2017 America’s Cup. It was the last event of this year and it culminated in a great win for Artemis Racing Team and Ulysse Nardin, Official Partner of the team.

The victory was much needed, after the team had suffered a capsized boat in one race and the misfortune of hitting rocks off shore in the Gothenburg races this year. Thankfully, the boats being raced in these World Series races are not the ones that will make the final America’s Cup series. 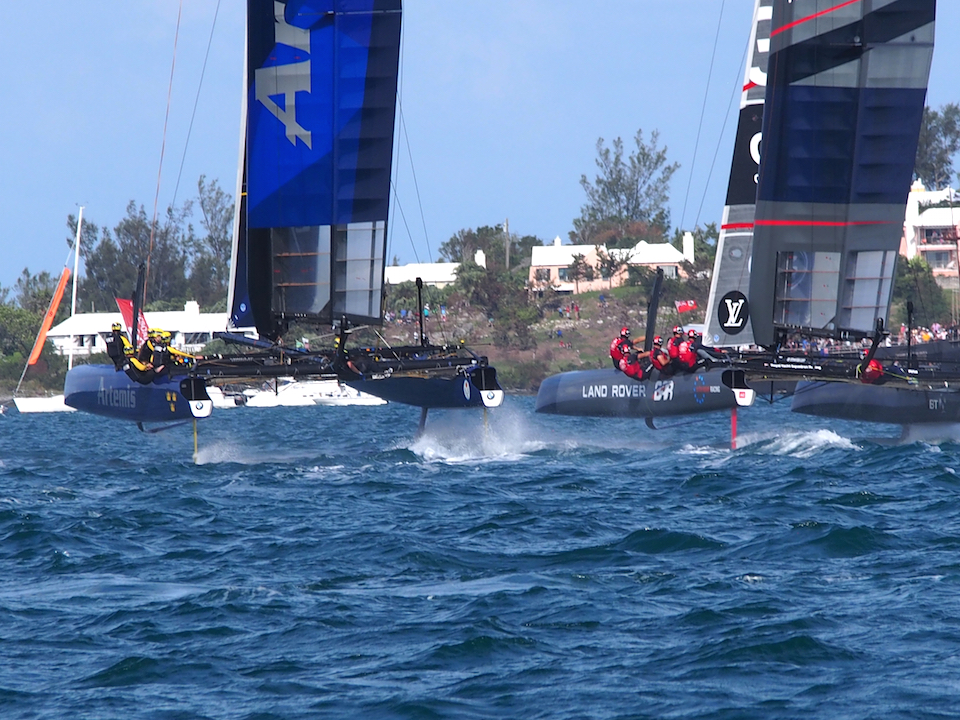 The racing was intense, with the boats flying out of the water at top speeds (Photo: @ R. Naas)

The Bermuda win brings Artemis Racing to fourth place in the overall series rankings – and marks the only team to have thus far won a fleet race in Bermuda – home to the 35th America’s Cup taking place in 2017.

The racing weekend was one filled with highs and lows. Day One of the races had to be postponed, as there was simply not enough wind on Saturday for the boats to reach the required 6 – 8 knots to garner speed. Day 2, however, proved to be an exhilarating day –with three races taking place on Sunday afternoon.

Perhaps the only glitch in the day was when an official judging boat sped out in front of Artemis Racing, as they were getting ready for the next race. It was a tense moment to see everyone scramble as the tiny boat got jammed beneath the front of the 45-foot catamaran. The team stopped all maneuvers immediately and raced to free the boat from the catamaran’s netting and to help one of the passengers, who had gone overboard, back on board. Everyone was ok, and when the tiny boat was freed, the Artemis catamaran suffered a loss of the front pole. Speedy boat “doctors” patched everything up and the next race took place just minutes later. 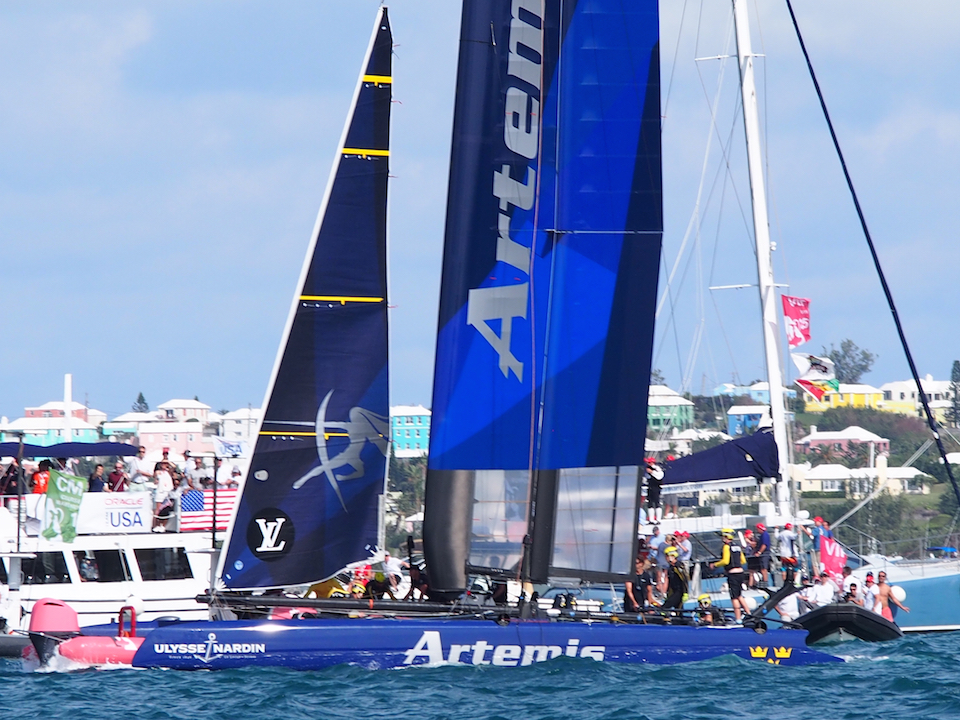 The small pink boat got lodged underneath the front of Artemis Racing (Photo: R. Naas)

In the end, Artemis came out with 52 points. These races are all about the accumulation of points for performance throughout the event. The points earned at each event are added up and the final tally puts teams into their respective line up. (In this race, Emirates Team New Zealand garnered 50 points; Oracle Team USA (the defender of the Cup) amassed 48 points. LandRoverBar had 44, Softbank Team Japan also had 44 and Groupama Team France trailed with 32 points.)

Team Manager and Tactician, Iain Percy admitted that the team was under pressure and was proud they did so well “We had a lot of pressure to perform. It’s [the win] going to project us towards winning in 2017.” 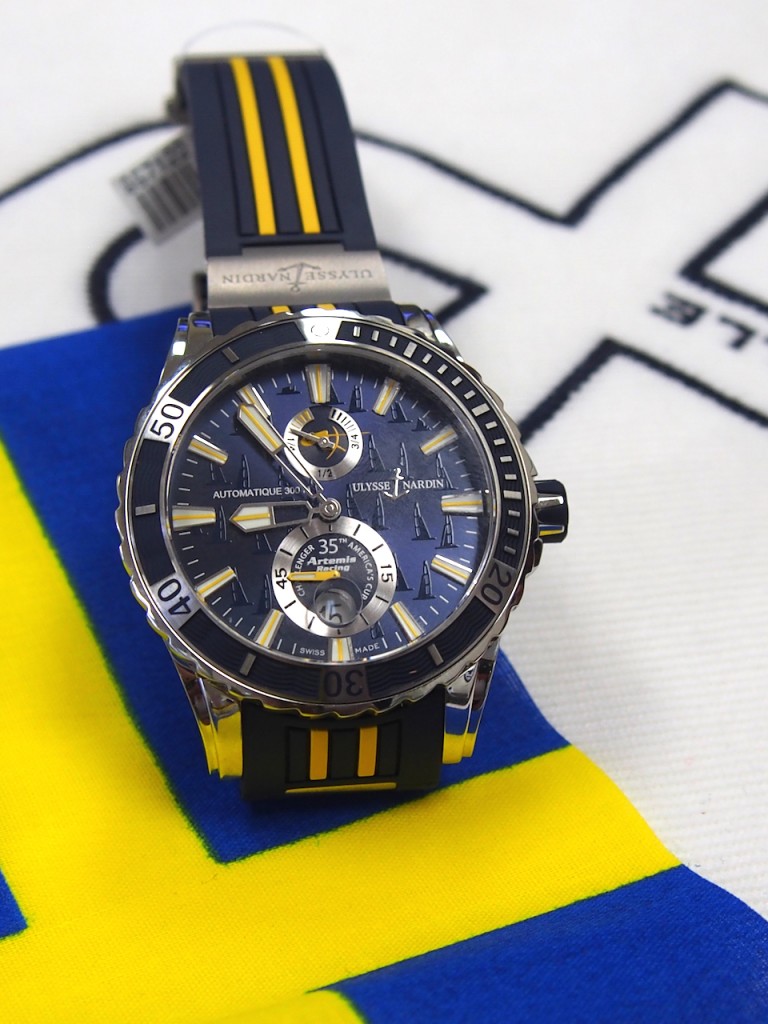 What makes the watch truly special, however, is the stunning blue and yellow Artemis Team colors for rubber strap and dial, the alluring blue dial with blue catamarans in tone on tone motif, and the engraved caseback with team logo, boat and “Challenger 35th America’s Cup” verbiage. Just 250 pieces will be made. 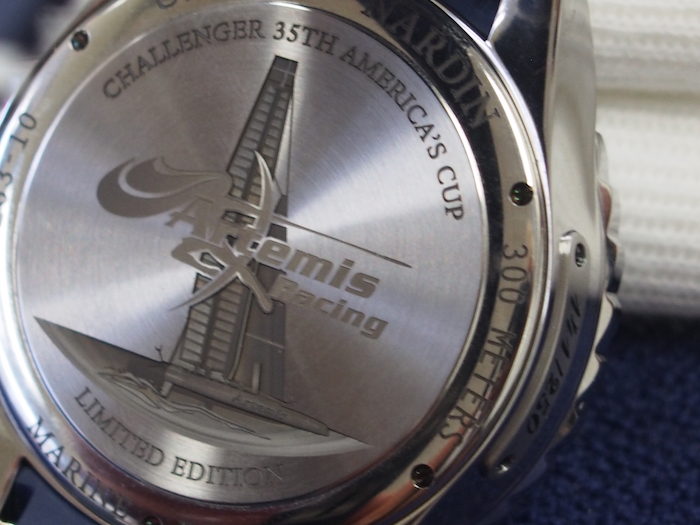 The back of the watch is engraved with the image of the boat (photo R. Naas)