Sometimes time really is of the essence. Sometimes time isn’t about being a few minutes late to that meeting or dinner. Sometimes the minutes we time are the ones that really count: those that make the difference between life and death; between medical treatments and going without treatments; between being a hero – or not.

Just about nine years ago, IWC discovered a group called Angel Flight Northeast – a group to whom time means everything – and has been sponsoring the non-profit, charitable organization ever since. Angel Flight Northeast (AFNE), which is celebrating 15 years of “Changing Lives One Flight at a Time,” is a group of volunteer pilots that fly patients (and their families) in need of critical medical care who do not have the resources to access other means of transportation. To date, the 1,000 AFNE pilots have flown more than 45,000 flights for nearly 60,000 patients and their families time and again.

“We flew our first mission in 1996” recalls Larry Camerlin, founder of Angel Flight NE. “Since then we have built an amazing team of pilots, Earth Angels [ground volunteers] and more, thanks to the charitable donations of our sponsors and our pilots.” 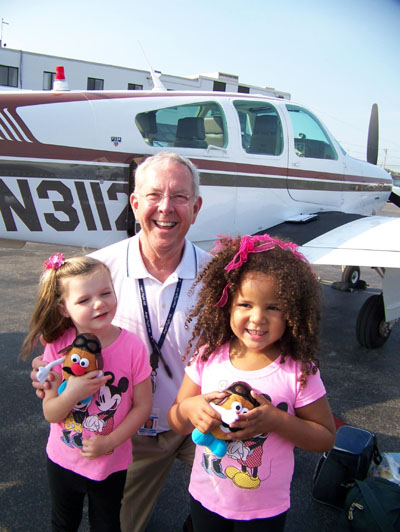 Larry Camerlin with Aurora Olcott and her sister. AFNE flies Aurora regularly. Each pilot donates time for the flights, the plane costs and the fuel costs. Planes are also sometimes donated by local airfields. Pilots donate as much or as little time as they have available; with some flying several flights per year and others fly hundreds of flights per year. The entire system is a well-oiled volunteer chain of dedication, honor, charity and hope.

Camerlin started Angel Flight NE after seeing an article in a magazine about a volunteer pilot for Angel Flight West. He had his pilot’s license and wondered what to do with it. “I decided this was what I could do. My life had been good, I had been successful and now I could help others.”  As it turned out, Angel Flight wasn’t a national organization. Camerlin had to start his own regional independent organization. He did so with three volunteer pilots at Beverly, MA, airport, which offered its space, and use of planes. Camerlin, who is also a minister, had a number of volunteers from his church join him—some of whom are still with AFNE today.

“It is so gratifying. These pilots are able to share their love of flying and make a profound difference in people’s lives,” says Camerlin. “Being here in the northeast, our pilots have flown some heroic flights during snowstorms, and some have even landed and then driven patients the rest of the way when they couldn’t get to where they were going. We all benefit — not just the people we fly, but we as volunteers, too.”

AFNE flies patients for as long and as often as they need to travel, with no limit on the number of flights provided, and serves a nine-state North-eastern region, but has flown missions to 189 different health care facilities in 23 states.