We’ve been keeping tabs on the recently released Armin Strom Mirrored Force Resonance watch, that increases accuracy by about 30 percent. Today, we bring you a look at a video that showcases the watch in all its beauty. 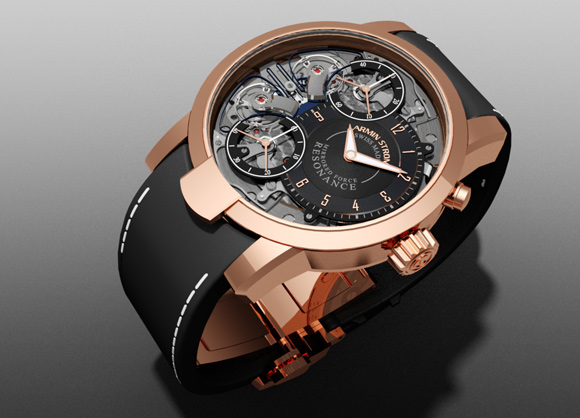 The Armin Strom timepiece was developed after much research and development into resonance — a sophisticated and demanding horological technique that has rarely been mastered. Armin Strom’s resonant Caliber ARF15 is a classically constructed manually wound movement that was conceived, manufactured, assembled, and regulated in-house. It beats at a 3.5 Hertz (25,200 vph) frequency, allowing the observer to really appreciate the patented, resonant regulators in action. The resonance clutch spring needed to realize the Mirrored Force Resonance’s twin display of seconds was so technical that the brand’s team, under the direction of technical director Claude Greisler, was left with no choice other than to create what it needed in house.

Like Calibre ARF15, the resonance clutch spring comprises only a traditional horological material: steel. Greisler and his team spent fully two and a half years perfecting the shape and characteristics of the spring: calculating, optimizing, simulating, testing, and improving again and again until the spring had the optimal, unique form needed to connect the two sets of oscillators, each comprising twin balance wheels and balance springs.

Here, we bring you a look at the brand’s latest video showcasing the beauty of this technically advanced watch.