Recently, at an exclusive event in NYC, Armin Strom unveiled its latest creation, the Armin Strom Mirrored Force Resonance, which we recently introduced to you here. Now, we bring you even more information about this unusual watch – not the least of which is the fact that in-house tests on the resonance complication in this timepiece demonstrate that the resonance adds an additional 30 percent accuracy. 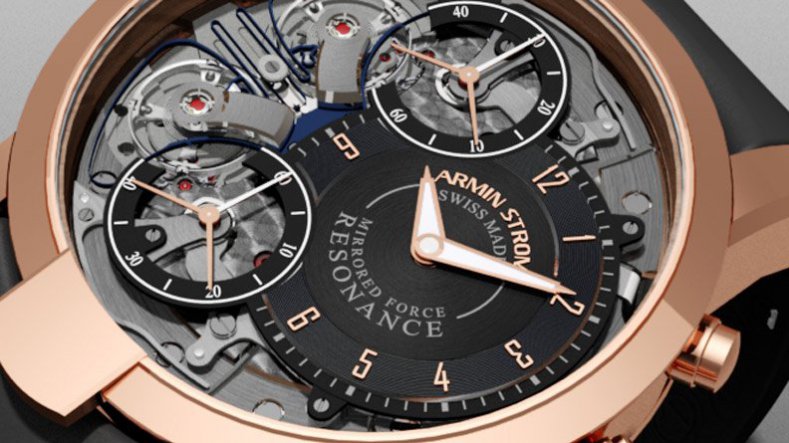 To truly understand the horological innovation, we have to first understand the resonance complication and its significance to the watch community. For starters, due to its complexity, the resonance is a rarely featured complication with only a hand full of appearances in clocks and only once, prior to Armin’s release, in a wristwatch.  The idea for a resonance is that two independently oscillating bodies will synchronize when in close proximity.

The theory (conceived by Galileo Galilei around 1637) was first developed by Christiaan Huygens 20 years later. Huygens is credited as the inventor of the pendulum clock –the most accurate clock of its day.  He theorized that the resonance of two separate pendulum clocks should keep slightly different time. When hung from the same beam, however, the pendulums of the adjacent clocks synchronized; subsequent researchers confirmed that the common wooden beam coupled the vibrations and created resonance. The two pendulums functioned as one in a synchronous manner. In the eighteenth century, Abraham-Louis Breguet further brought the idea and concept to life when he created the double pendulum resonance clock.

The advantages of a resonance are threefold, 1) enhanced accuracy from the stabilizing effect of the resonance, 2) conservation of energy improving power reserve (imagine a racecar driver shadowing another driver, shake and bake), 3) reduction on the effect of negative stimuli from the outside environment such as shocks. An outside shock that slows one balance will crease the speed of another until the piece is back in resonance. 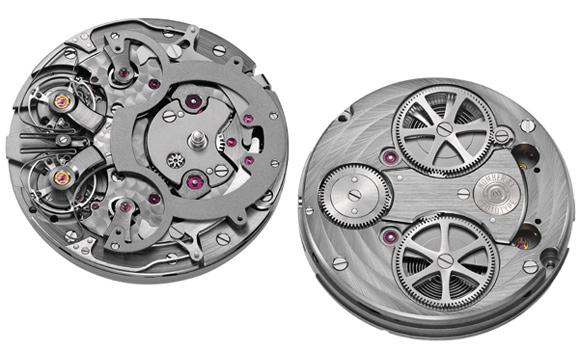 The Mirrored Force Resonance is driven by the classically created and manually wound Caliber ARF15. Armin Strom assembles all pieces in house and the latest is no different, it is conceived, manufactured, regulated and assembled in house. The dial side of the piece puts the resonance on full display. Visible is the twin vertical display of the second hands at the 12 o’clock and the 6 o’clock, well as the resonance clutch spring that they are bound by at the 9 o’clock. The time is displayed at the 3 o’clock. The second hands move in opposite directions one clockwise and the other counter clockwise, hence the term Mirror in the titling of the watch. One second hand governs time and the other focuses on accuracy. The pusher to verify the piece is in resonance and to activate it if it is not is located along the dial at the 2 o’clock. The frequency of the piece beats at 3.5 Hertz and allows for the viewer to see the resonant regulators in action and the resonance clutch spring displayed prominently on the dial side took two and a half years of research and development to bring to market.

The watch sports a 48-hour power reserve. If the power is exhausted, once the piece has been fully wound the watch will take approximately 10 minutes to get back into resonance.  Additionally, if the watch is subjected to a severe shock, resonance can be reestablished in approximately three minutes. This is because it is not the balance wheels that Armin Strom’s technical team has connected using the resonance clutch spring, but rather the balance spring studs, which receive the impulses.

As mentioned above, I was skeptical about whether or not resonance really adds to the watch’s accuracy? During the event in NYC I asked the question and was pleasantly surprised by the response. Armin Strom uses classical elements in the watch making process and avoids some of the more modern compounds and alloys for the components of its movements. As a result horological innovations can be observed from a classical perspective where technological improvements matter more than the materials used in building the watch. The end result of the resonance complication from the in-house tests is that the complication adds an additional 30% in accuracy. This is easily the most sophisticated piece offered by the manufacturer. 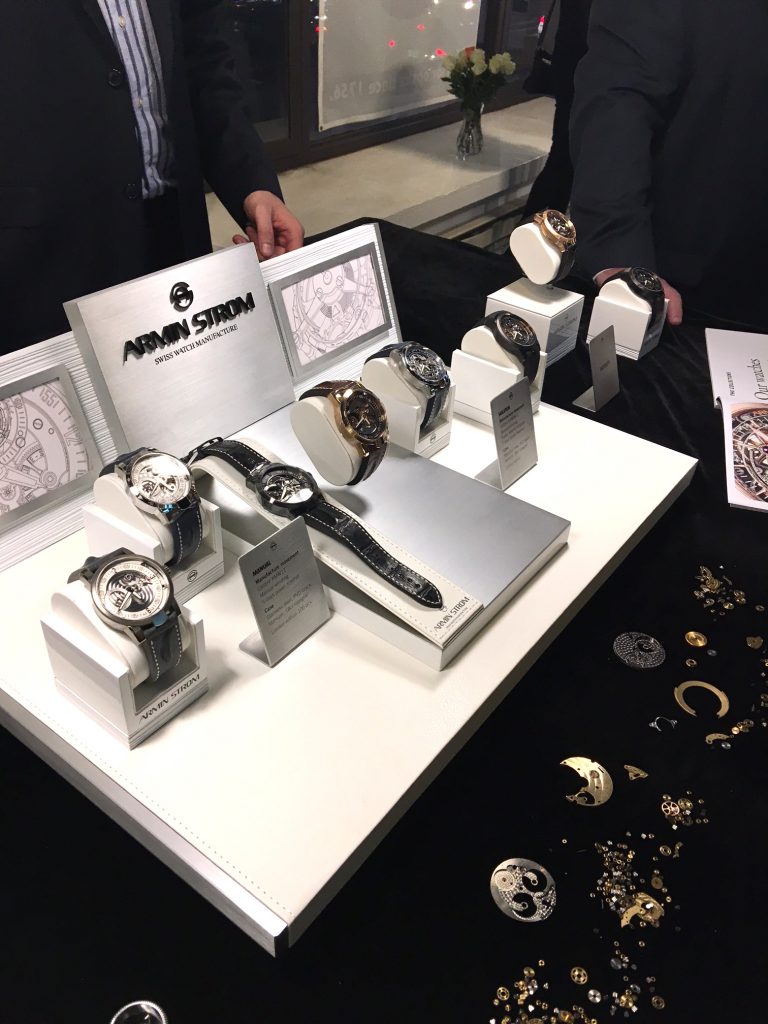 A display of Armin Strom watch at the NYC event.

Armin Strom is known for producing watches inline with four elemental themes. For the Mirrored Force Resonance, 50 pieces will be produced in gold — the fire element. Future iterations have yet to be announced. What also makes Armin Strom unique is that all watches are purchased directly from the manufacture. This allows for an intimate experience for the purchaser where they can truly get to know the brand. This also allows for personal customization and bespoke experience, from engravings to family crests to even selecting different elements of the watch itself. As listed the Mirrored Force Resonance will retail for $70,100, but additional customizations can alter the price.

I Went To The Seaglass Rose’ Experience With Corum, Here’s What Happened
December 5, 2016