An Insider’s Complete Review of SIHH 2018: Come Inside With Us And See What A Typical Day Is Like And Witness The Best Exhibition Spaces And More 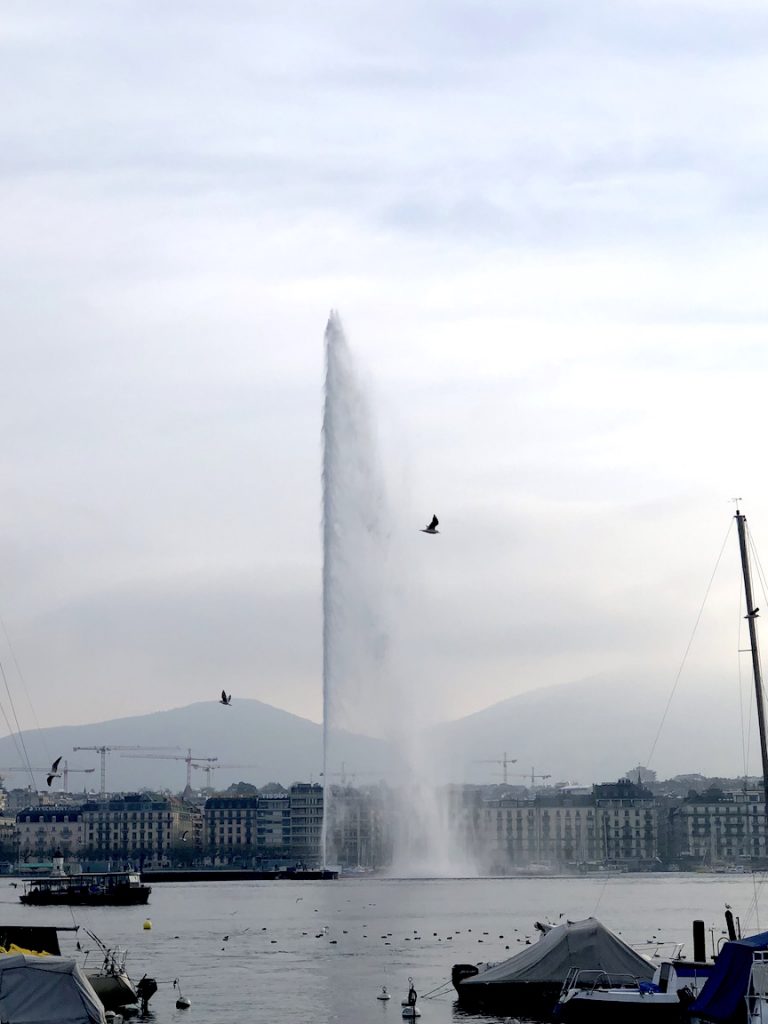 The iconic fountain on Lake Geneva.

Every year, we anxiously await the trek to Geneva for the Salon International de la Haute Horlogerie (SIHH) – the first luxury watch exhibit of the year. This year marked the 28th exhibition – and my 27th year in attendance (I missed one year when my darling daughter was born). As always, it was a thrill to meet up with old friends, make new friends and feel the beating pulse that guides the watch world through yet another year. Here, we bring you an Insider’s complete review of SIHH 2018, from the show’s growth and changes, to the exhibition space and more.

As a journalist with a Master’s Degree in newspaper and broadcast journalism, I am naturally all about getting the news out there, especially as it pertains to new products. And, while I was privy to most of the unveilings taking place during SIHH before the fair (yes, I signed my fair share of NDA’s), I covered many of the new watches here already. The thing is, because I also predominantly write for luxury consumer publications as opposed to watch-specific pubs, I also understand the value of taking my time to showcase watches closer to the dates they will be appearing in markets – let’s help drive the traffic, after all. 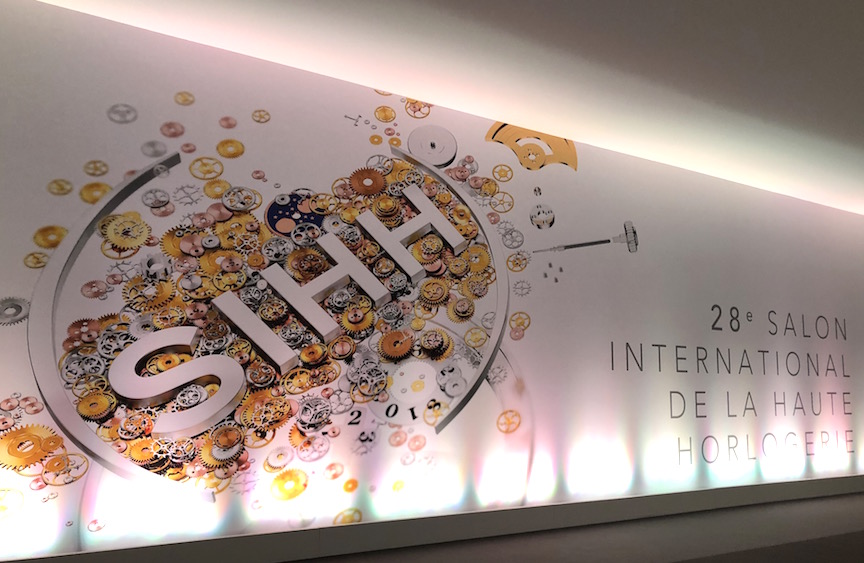 While new watches and collections are, of course, the stars of the show, there is an entire other news story that is often overlooked: the show itself. I  remember when SIHH first began, when the powers that be at Cartier announced that they would be leaving the Basel Fair (as it was called then) and starting their own show. It was a bold and daring move, meant to set them apart from the sea of brands at Basel. I remember like it were yesterday, walking the first SIHH, with brands such as Bovet, Franck Muller and Cartier — among others – taking part with enthusiasm and excitement. While many brands have come and gone each year, while the show has morphed and grown, this exhilarating exhibition still maintains that sense of wonder and excitement.

My Typical Day At SIHH

Visiting the SIHH Exhibition is a discovery of brand philosophies, positioning and innovative marketing. It is an adventure as we see new exhibition space, new expansions and more. Of course, there is also product to be seen and so for five days straight, I have a standing wakeup call at 630 am. I am at the show every morning at 8 am – even if I stayed out a bit too late the night before imbibing in great wine and wonderful conversation with friends. Each day I visit brand after brand, and go hands-on with watch after watch. With 35 brands to see at the show, I easily double my appointments, as I meet with brand executives and SIHH Fair organizers, and others. I get the inside scoop not only on the newest pieces, but also on the watches that are still top secret – watches to be unveiled later in the year. Best of all, I do this with watch brand executives and industry people whom I have known for years and am grateful to call my friends. As you have seen via our posts here over the past weeks, the product is the true star, and we will continue in the ensuing weeks to bring you close up looks at many of the newest timepieces that are setting trends and making history. In the meantime, take a look inside this year’s SIHH exhibition space with us. 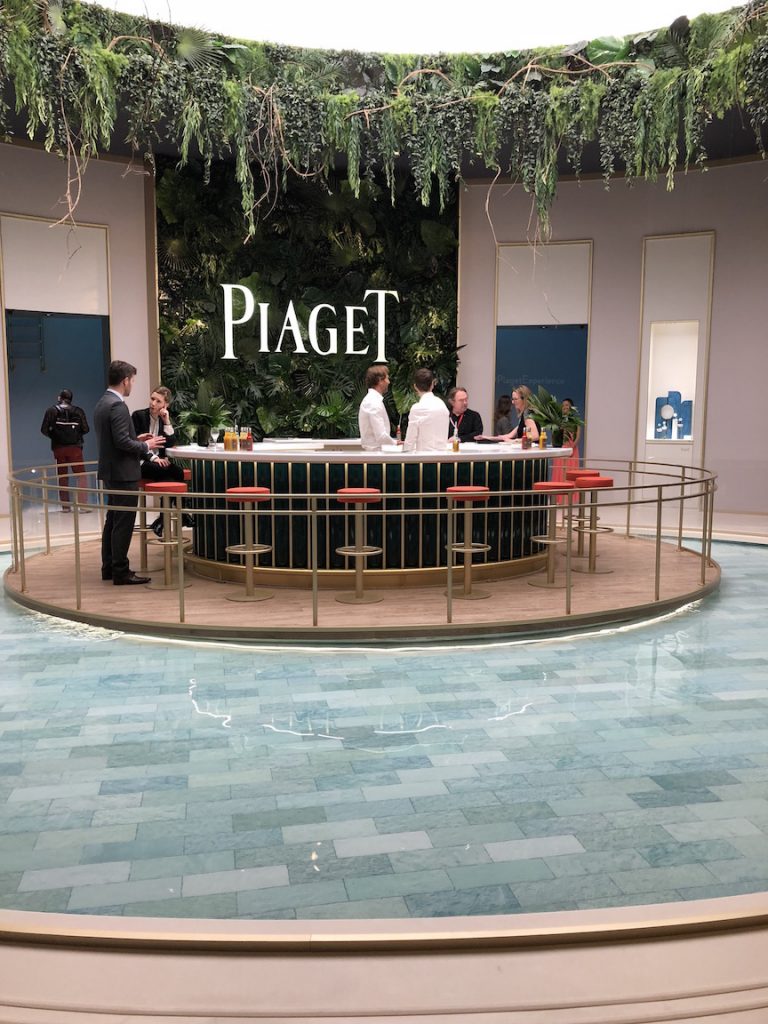 Inside the SIHH Exhibition Space – Prepare to be Wowed

This year, Hermes joined SIHH – leaving BaselWorld behind and setting up shop at the show right around the corner for the Carre’ des Horlogers – where 17 top independent brands exhibit.   In fact, this year several independents also made their appearance on the SIHH scene, including Armin Strom, Kari Voutilainen, F.P. Journe, DeWitt and Gronefeld.

With more than 35 brands to visit during just five days, one would think SIHH might be a bit grueling to work. Not at all. I thrive on the excitement of one-on-one appointments to see hundreds of watches at each, of interviewing top CEO’s and celebrity brand ambassadors, of endless champagne, fine dinners and great friends. Exhausting? Pretty much so, but at the same time — invigorating. 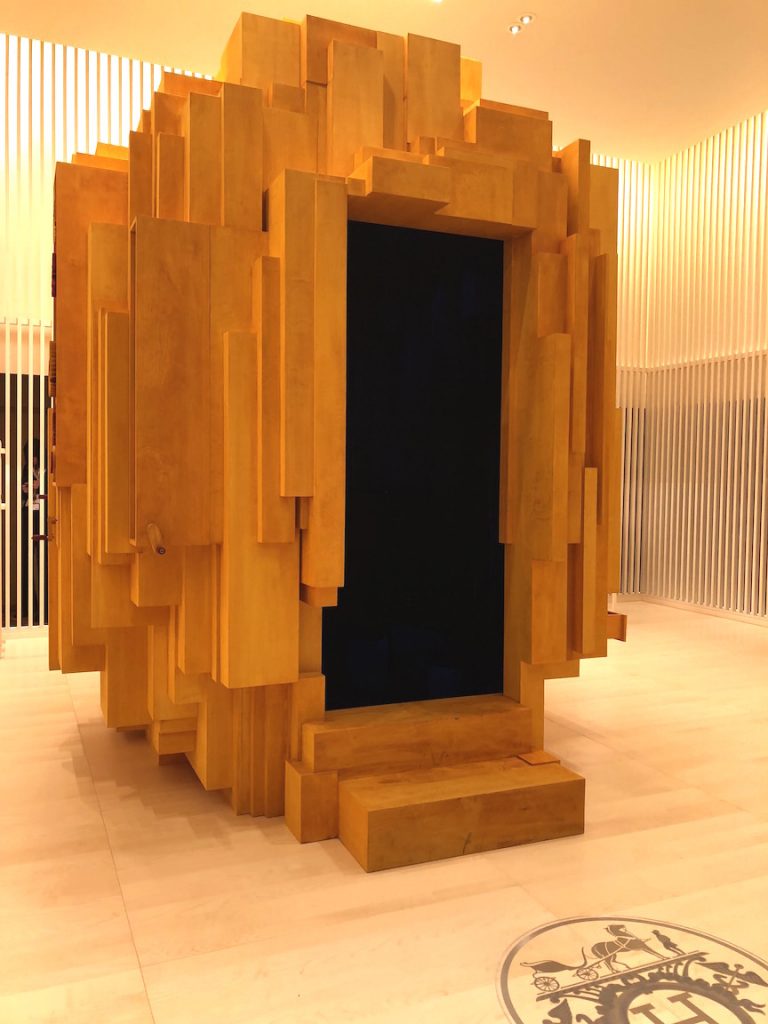 Hermes joins SIHH 2018 this year, and it showcases its heritage and craftsmanship, but first one must enter the wooden marquetry box that stands in the center of the booth space.

So, let me bring you an inside look at the luxurious city within PalExpo walls that is SIHH. After a thorough security check (much like the airport), one enters the beige-toned luxurious space that consists of dining stations, espresso stops and lavish brand exhibition spaces on each side of wide corridors. Much like a luxurious mall, each brand has its own dedicated space, and decorates it according to its own brand DNA.

In the past, I have witnessed brands bringing in America’s Cup catamarans, Formula 1 cars, life-size automatons, and larger-than-life sculptures. I have seen brands transform their exhibit space into Roman cities, Hamptons beach houses, and sumptuous living rooms. This year, we witnessed several exhibit transformations that were incredibly exciting and daringly different. 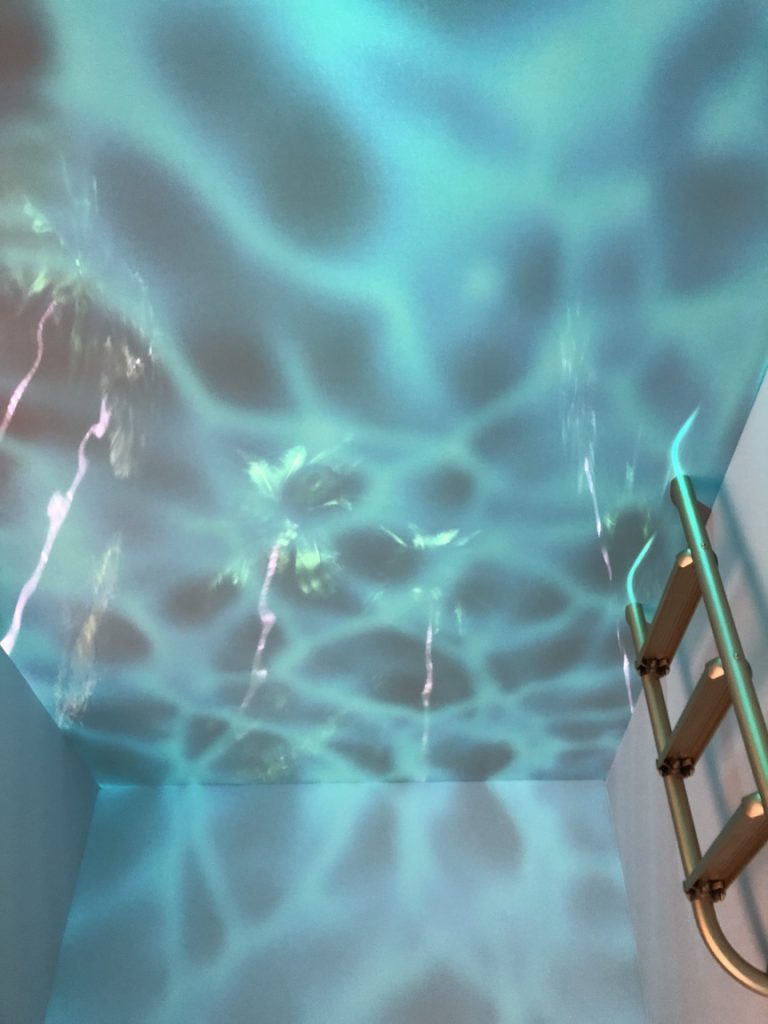 A back room at the Piaget exhibition space at SIHH 2018 makes you feel as though you are underwater in a swimming pool.

Piaget may have been my favorite, as this brand transitioned away from its classic look and embraced the concept of the luxurious hey-day years of Yves Piaget. By turning to the glorious countries that Yves Piaget traveled to in the 1960’s, 1970’s and ‘80s, when he was building the 20th century foundation of the brand, Piaget transformed its exhibition space into a tropical wonderland. Palm fronds adorned walls and a lazy river sort of waterway wound its way around the space, encircling a juice bar. Nearby, a waterfall flowed from the ceiling, birds called and peaceful island sounds made up the background chatter. In a side room, one entered a simulated swimming pool, with blue water on the ceiling that emulates the surface of the pool. This was the environment that greeted Piaget guests.

It was particularly appealing to me – not just because I am a tropical beach lover, but also because I have known Yves Piaget since those early days. We became close friends decades ago, and I could envision him easily in this luxurious environment – complete with watches showcasing precious gemstone dials – as he once introduced to the world. 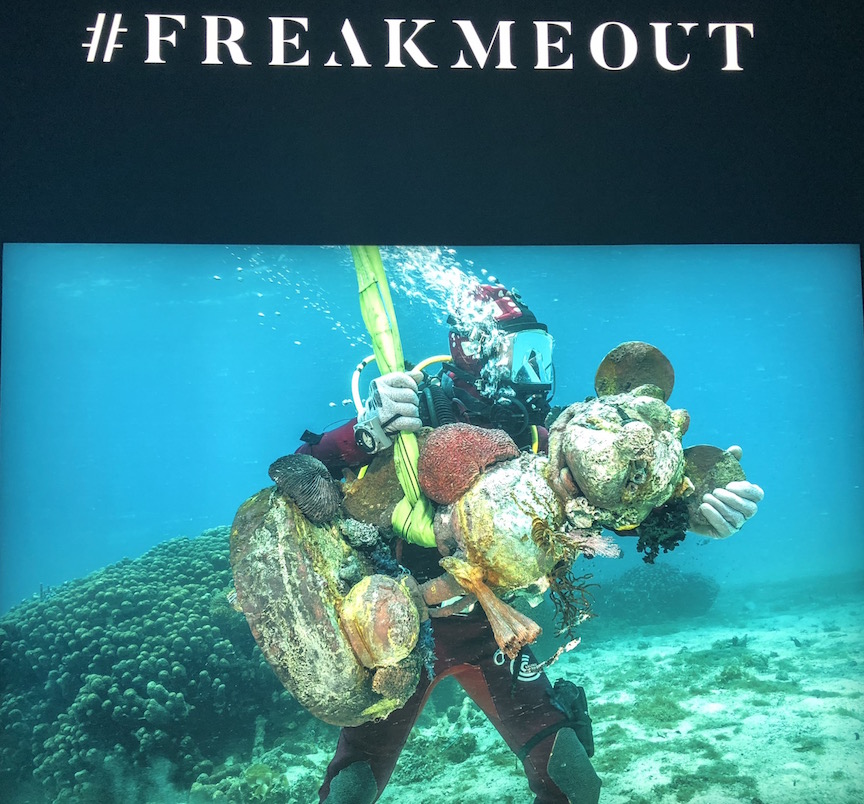 With the “Freak Me Out” theme pertaining to the Freak Vision and the Marine theme, as well, Ulysse Nardin focuses on underwater adventures at SIHH 2018.

Ulysse Nardin also went to new heights with its décor. The brand ditched its “America’s Cup” theme from last year, but maintained a water theme that underscores its Marine heritage. As one entered the booth, it was like entering the ocean. Coral reef sculptures by the famed Damien Hirst were on display, side by side with marine watches. The backdrop wall was a film of underwater oceans, sharks and more that continually changed scenes as though in real life underwater. Look to the ceiling and it was like looking to the surface of the water. For those who are not fans of underwater adventure, it may have been just a little difficult to breathe. 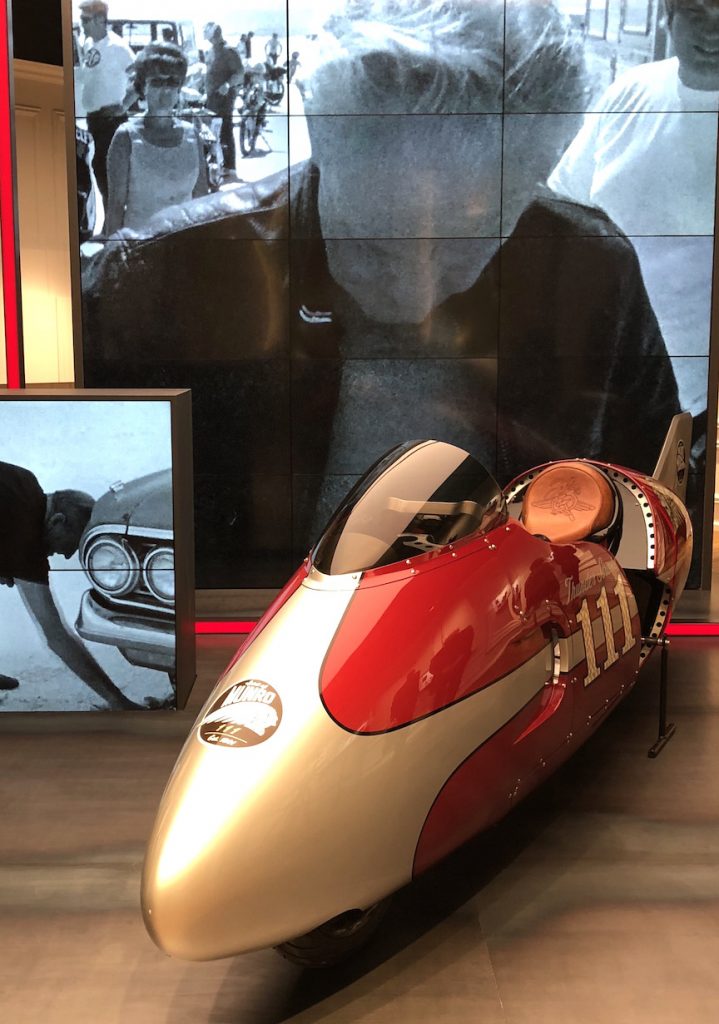 Baume & Mercier’s recent partnership with Indian Motorcycles transformed the brand’s booth this year into a homage to Burt Munro speed racer and record maker, as well as to Indian motorcycles.

Other exciting new exhibition spaces came from brands like Baume & Mercier, which traded in last year’s Cobra exhibition for an Indian Motorcycle theme thanks to its newest partnership, and Roger Dubuis, which – while remaining in an automotive spirit – transformed its exhibition space to a electric white space that recalls the super clean pit stops in auto racing – where videos on the walls show the cars in progress on the track, the pit stops and more.

IWC took a new stance, as well. Whereas every year in the past, this brand sets up its space to support the highlight product line of the year (Top Gun, Mercedes-AMG, etc.), this year the brand’s space showcased its history, American roots and more in a very modern and futuristic manner. This year is, after all, IWC’s 150th jubilee. 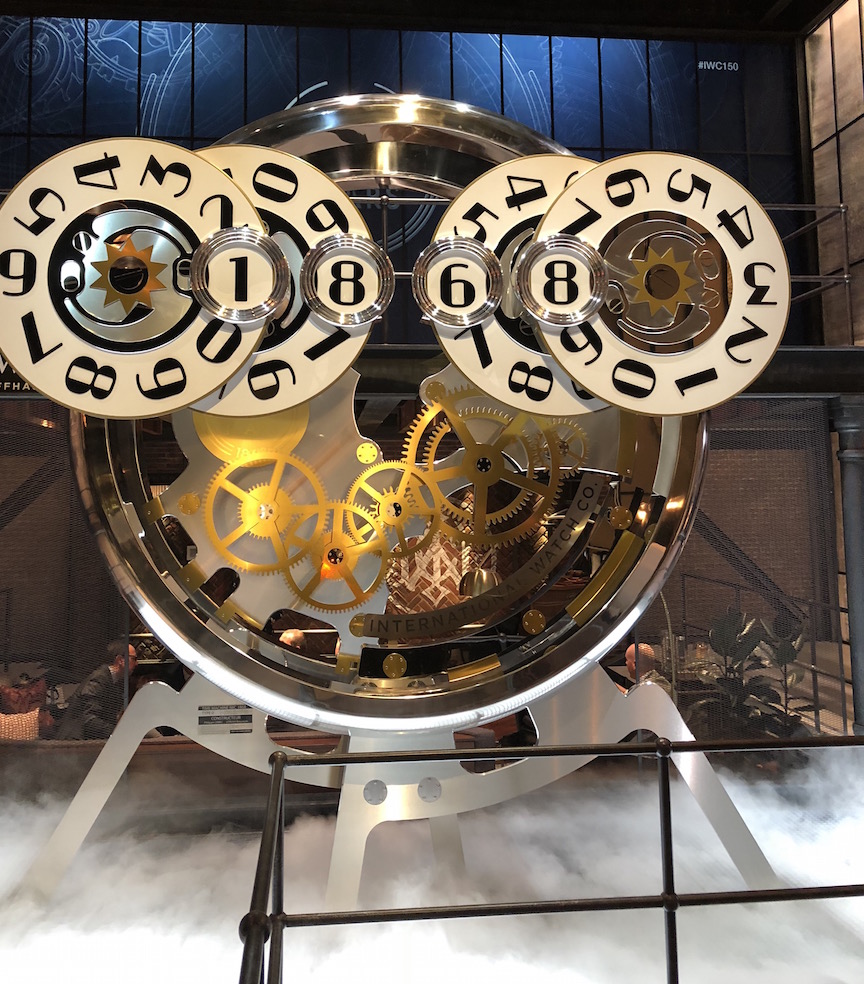 At SIHH 2018 this year, IWC deftly blends its 165 year history with a modern flair …. it’s not all smoke and mirrors.

Jaeger-LeCoultre, which unveiled a new digital marketing campaign called “Made of Makers” as the brand celebrates its 185th anniversary, paid homage in its space not only to the making of its watches, but also to artisans around the world. It showcased the wooden frame of a hand-made and designed automobile, featured watchmakers and artisans hand-crafting their workmanship on site, and had several family members from Casa Fagliano (polo boot makers and specialty strap makers for the Reverso) of Argentina on hand demonstrating their amazing craftsmanship. I was thrilled to see these experts again, as I have visited their workshops in Argentina with Jaeger-LeCoultre in the past and was highly impressed. 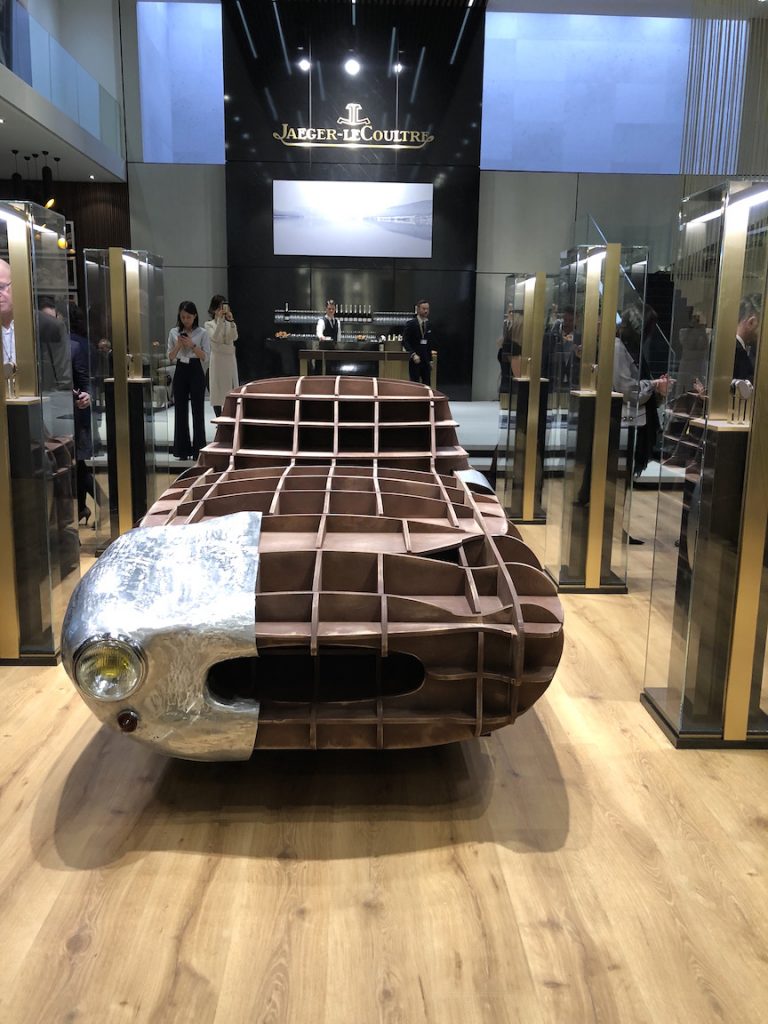 Inside the Montblanc space, in a corner, the brand had a virtual reality “mountain climbing” photo op – in keeping with its newest mountain climbing/hiking theme. Even the luxury brands of Vacheron Constantin and Cartier updated their exhibition space for a lighter, brighter, more modern appeal.

Over in the Carre’ des Horlogers, the independent watchmaker’s space, a different vibe prevailed. With smaller exhibition spaces, these 17 brands nonetheless each made its own statement. From Spiderman on the New York City skyline at Romain Jerome’s booth, to historical chronometers at Ferdinand Berthoud and the watchmaking school demonstrations at Time Eon Foundation (with Philippe Dufour often on hand), this area played home to a great deal of foot traffic as their visionary timepieces continually drew a crowd. 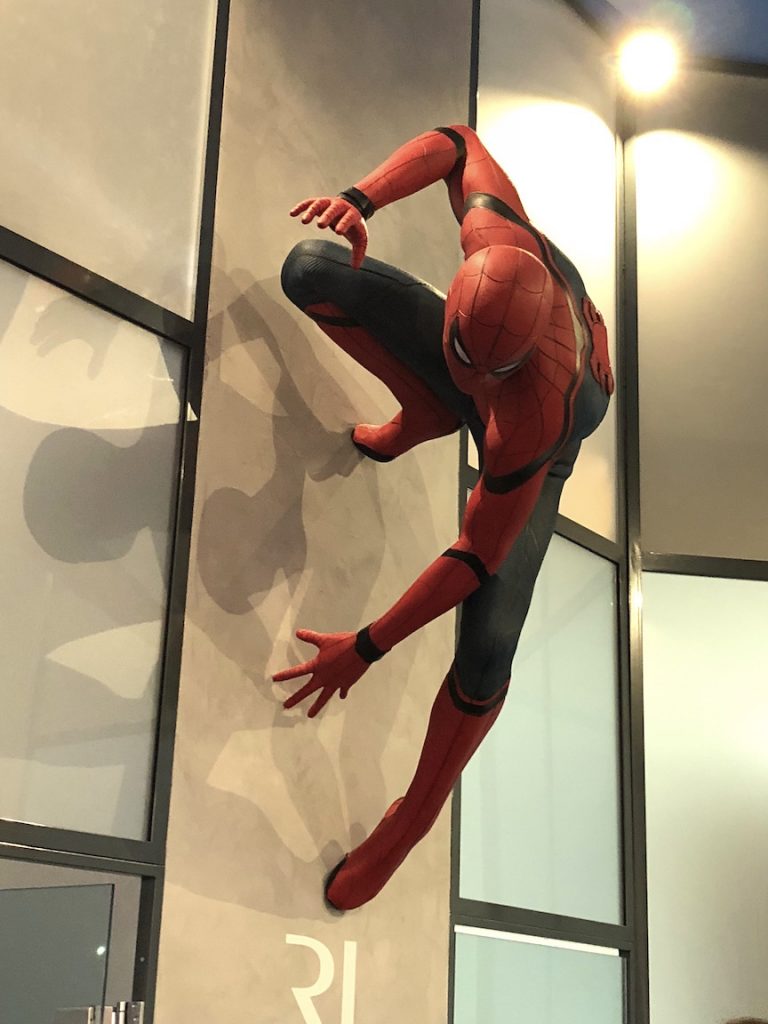 At Romain Jerome, spiderman makes an appearance on the wall designed to reflect the Manhattan skyline at SIHH 2018

While we worked hard at this show to get all of the insider scoops we will be bringing you throughout the year, we also worked with awe and wonder – each year at SIHH is a gift of newness, friendships and meaningful time.