An Insider’s Complete Review of SIHH 2017 Watch Show, its History and More 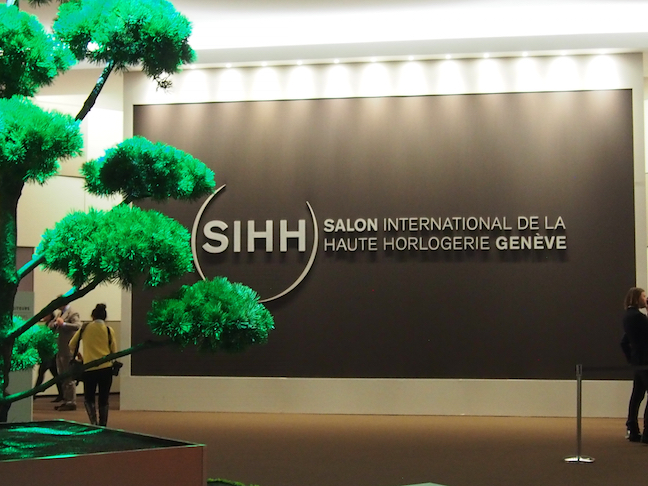 This past January marked the 27th Salon International de la Haute Horlogerie, and — don’t pass out — it was my 26th year in attendance. Unfortunately i missed 1992 due to the birth of my darling daughter, but I haven’t missed one since.  I remember when the show first started. In fact, to be honest, I remember before the show started — when Cartier made the bold announcement that it was abandoning Baselworld and starting its own show with a group of other brands. Well, 27 years later, the SIHH exhibition –that show started by a few brave brands who dared to be different and take a stand –is still going strong. Here, we bring you an insider’s review of SIHH.

Before I regale you with the tales of endless champagne, fine dining, superb watches, even more superb watches, great friends, opulent environs and exhaustion, let me give you a little background on how and why this show got started — because it is relevant to who exhibits there today. 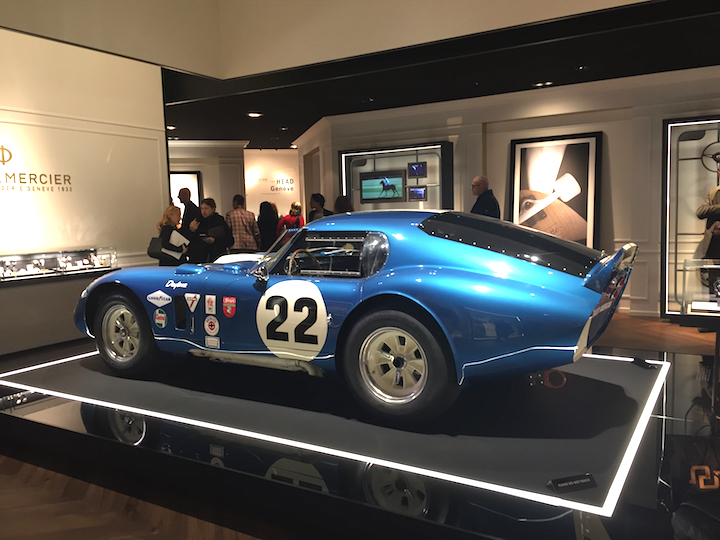 Baume & Mercier SIHH 2017 exhibition space, with the famed Coupe — and Peter Brock, designer, of the famed car also was at the show.

The first year of the SIHH exhibition saw Cartier, along with a host of others, including Bovet and Franck Mulller, exhibiting at a small space at Pal Expo. The show was more luxurious and easier to work, and the buzz traveled far and wide about a new luxury watch show that was actually “fun” to work. In those days,  and for the first half-a-dozen years or so, SIHH was immediately before, and, later, after, the Basel show. Then, fair organizers made the decision to move the show to January — once again worrying SIHH attendees and exhibitors who wondered  whether or not  the retailers and press would flock twice to Switzerland in the course of three months. They did. 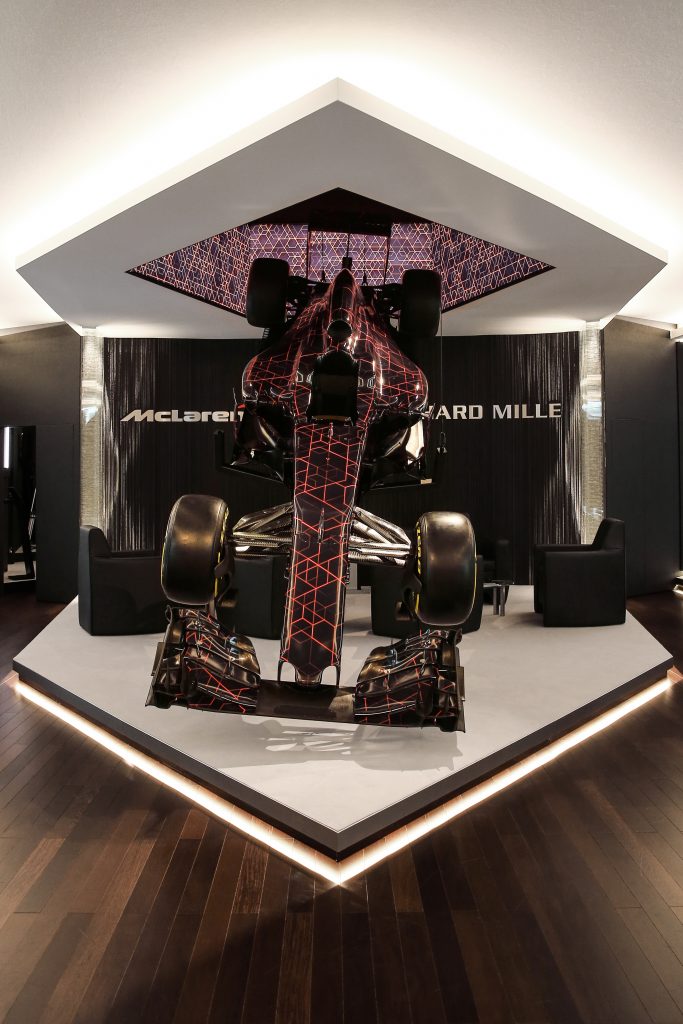 Since then, over the course of 27 years, the SIHH has morphed and changed. Brands have come and gone – and some have come back. The Richemont Group was formed, and slowly began buying a host of brands, including Jaeger-LeCoultre, IWC, Roger Dubuis and so on — all of which were brought into the SIHH fold — leaving the Basel show to join SIHH with their “siblings.”

Each year the brands — generally about 17 (until last year when the independent brands were added to the line up) of them — bring their latest and greatest watches to a place that looks like a small, luxurious city of wealth. Once inside the large PalExpo space, visitors are greeted by well-lighted, massive hallways, with champagne and food stations and dining areas throughout. Espresso and champagne flow freely all day long, and a lavish lunch with entrees ranging from sushi to dimsum and carpaccio,  is served to thousands of visitors daily. 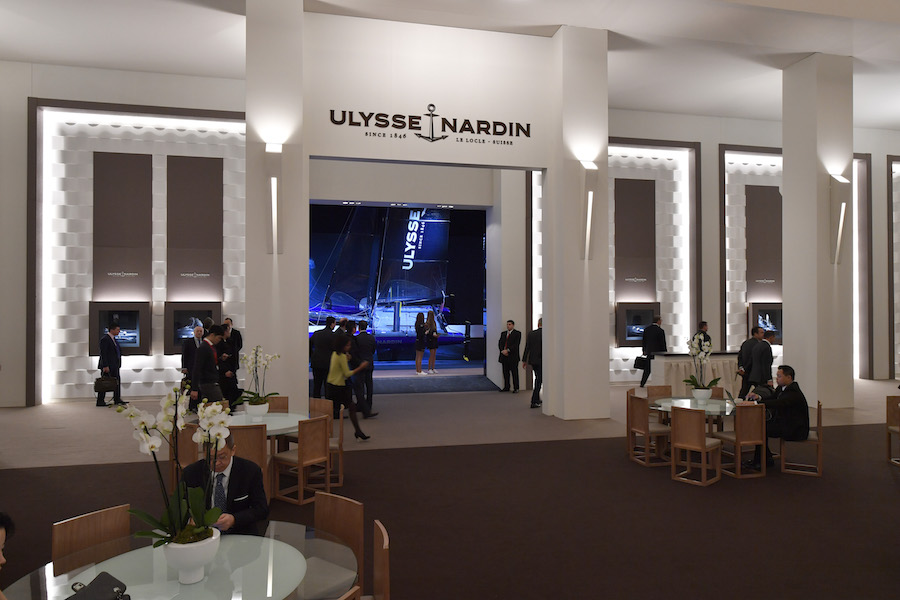 As to the “booths,” they are huge exhibition spaces that reflect each brand’s core DNA, or the message the brand is sending that particular year. I have seen Formula 1 cars, small fighter planes, and boats — including America’s Cup catamarans — in booths over the years, and I have seen spaces transformed to grand beach houses in the Hamptons (ala, Baume & Mercier) and made into mechanical wonders with giant sculptures or automatons (Roger Dubuis) making an impression.

This year was relatively calm, although Richard Mille did have a F1 car in their space and IWC transformed its typically predominantly male-oriented space into a Roman forum to show off its dedication to  DaVinci for 2017. This year, too, SIHH expanded the space it carved out for independent brands last year and added more brands to the mix. In total, there were 30 brands exhibiting at SIHH 2017.

So, as you can imagine, in addition to the opulence of the show, the luxurious and cavernous exhibition booths, there are watches — thousands of watches. It’s really better than being a kid in a candy store.  Granted, I start every day with a 6:30 am wake up call (after ending ever night with a few bourbons and bed at midnight or 1 am), but it is worth it.

For five days straight I peruse watch after watch, I get the inside scoop on some timepieces that are still top-secret (the independents have to leave some secrets for Basel, where most of them also still exhibit), I get to see, touch, feel and go close up with the most complicated watches in the world for this year. And, better yet, I do this with watch brand executives and industry people whom I have known for years and am grateful to call them friends, in addition to colleagues. 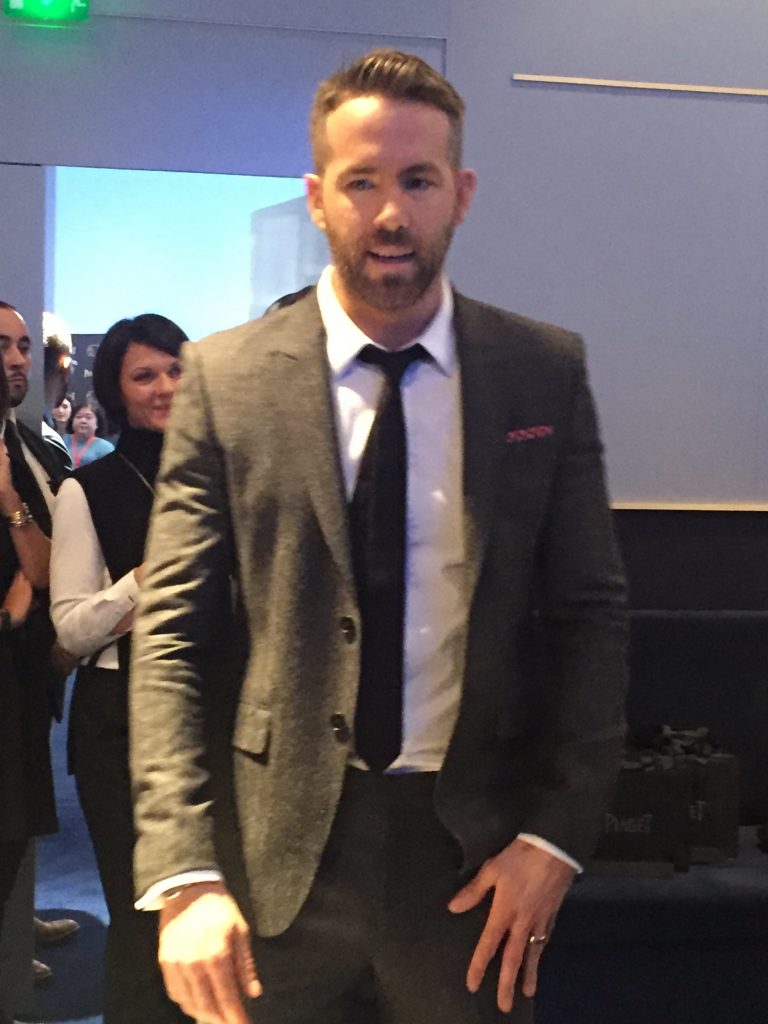 Oh, and let’s not forget the celebrities present. This year Ryan Reynolds made an appearence at Piaget, Pierce Brosnan showed his face for a while at Peter Speake-Marin’s booth and there were a host of others. In fact, over the years, I have had the good fortune of interviewing a number of top celebrities, including Susan Sarandon and Dev Patel, at SIHH.

In all,  it is a  wild and wonderful ride of friendships, innovation, excitement, too little time and magical moments. We work hard – really hard, laugh hard, eat good, drink well (as long as you go for the French wines) and learn so much to further our knowledge of how today’s brands bring their pioneering spirits to all new heights. It is one of the most exciting and wonderful experiences in the watch world.  SO, while we may complain “here we go again, oh no, get ready,” the reality is: “Wow, here we go again, so great!”

As you have seen here over the past weeks — and we will continue into the  ensuing weeks –we bring you close up looks at many of these watches: timepieces that are setting trends and making history. So keep on reading, my friends.