A Look Back: Six Best Minute Repeaters Of 2021 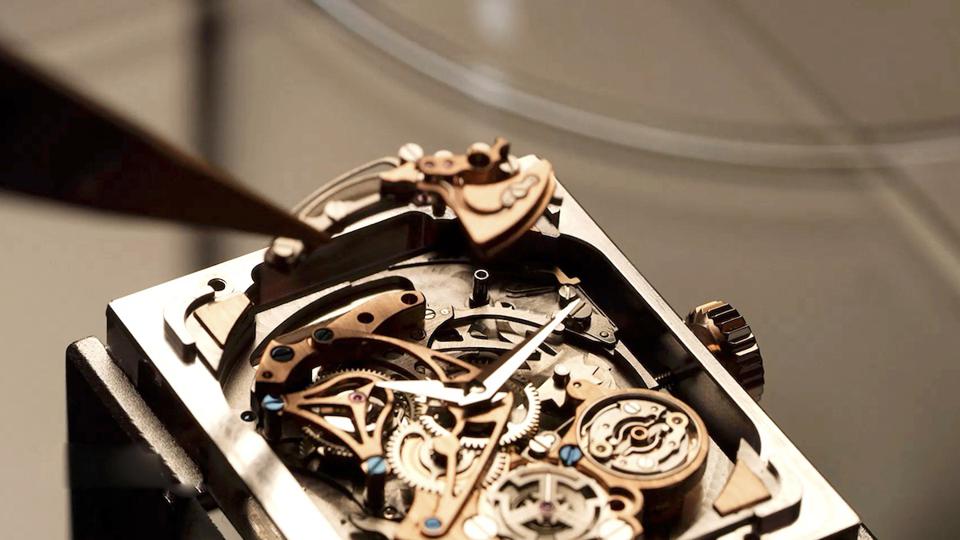 Just 10 of the Jaeger-LeCoultre Reverso Tribute Minute Repeater watch will be made. 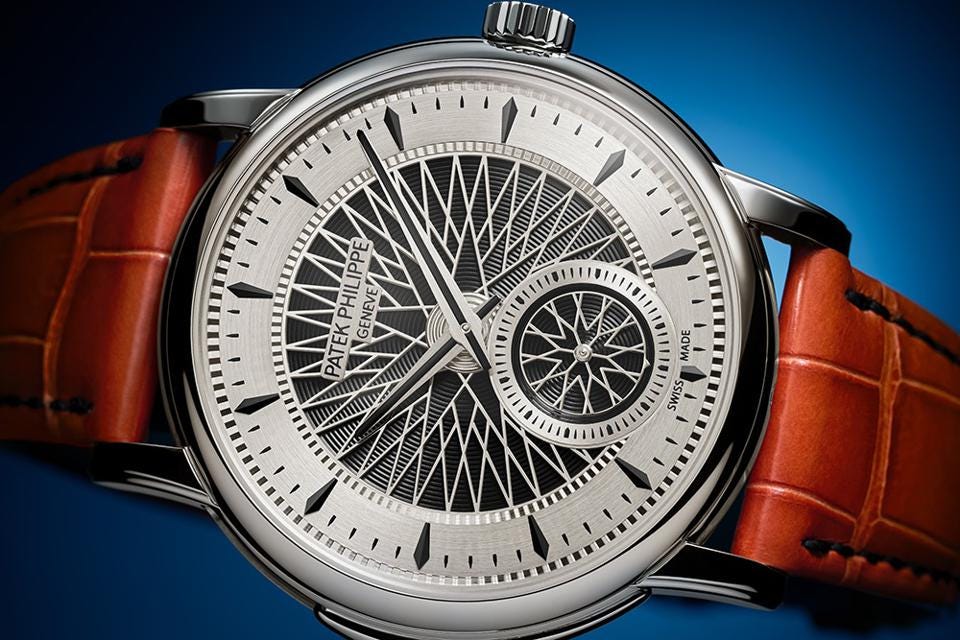 No easy feat to accomplish something new in the world of chiming watches, Patek Philippe always defies the norm.  Its most recent timepiece, Ref. 5750P, while traditionally made, boasts a high-end visionary component: a sapphire crystal  disk that vibrates on the end of a sound lever shaped like a tuning fork that sends the sound down the fork and along a titanium ring to the outside of the case. Traditional chiming watches typically boast metal gongs and hammers. This new “fortissimo ff” crystal chiming and amplification system incorporated into the brands’ existing automatic repeater movement, increases the volume of the sound by six times that of a metal chiming watch.  The platinum case boasts apertures for the sound to be emitted from, while a special inner system protects the movement from dust and dirt.  Just 15 pieces will be made. 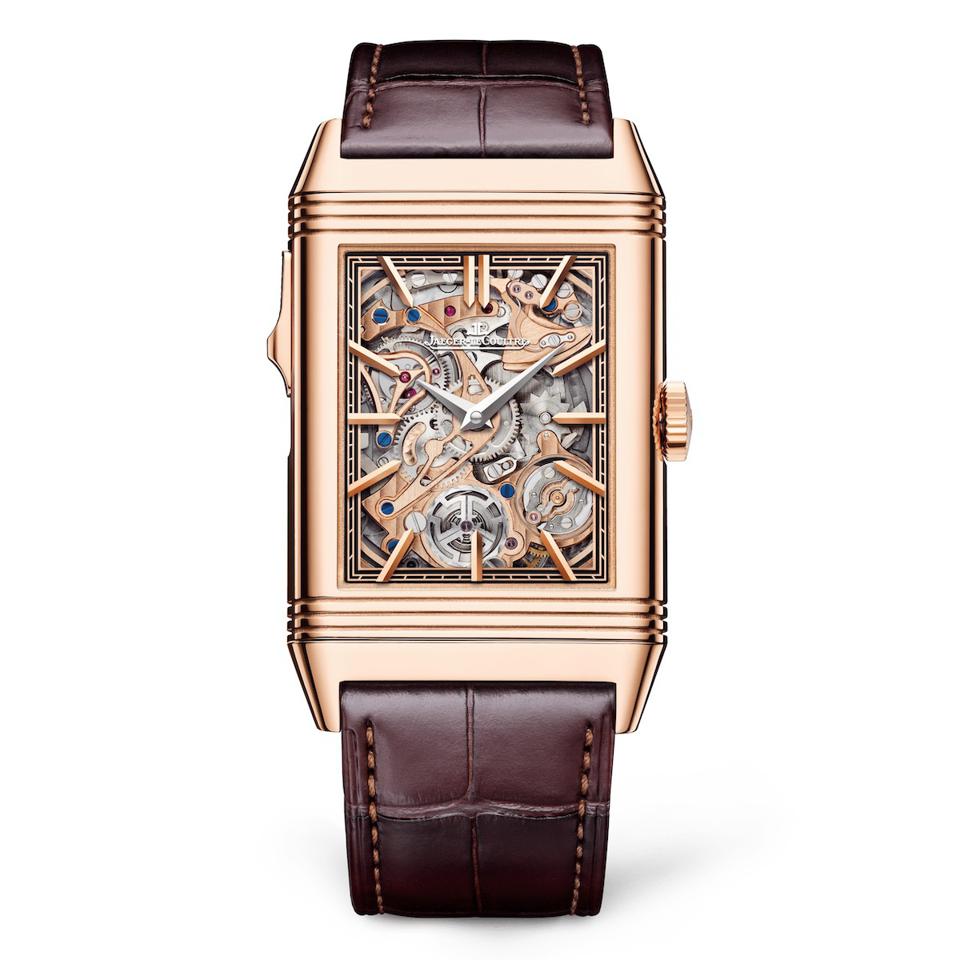 Also a master at chiming watches, Jaeger-LeCoultre this year created a very special Reverso Minute Repeater in honor of the 90th anniversary of the coveted rectangular watch that reverses in its base. The $293,000 watch, which was unveiled to the world in September at the brand’s Sound Maker exhibition in New York, is called the Reverso Tribute Minute Repeater and just a limited number of 10 pieces will be made. In fact, most are already spoken for. The elaborate manually wound Caliber 944 is highly skeletonized to allow the wearer to view the patented hammers and new gongs.  The gongs are made of sapphire. The watch case is crafted in 18-karat pink gold, usually considered the best sound-amplifying metal.   The reverse dial of the Art-Deco inspired case offers a geometrically inspired motif. 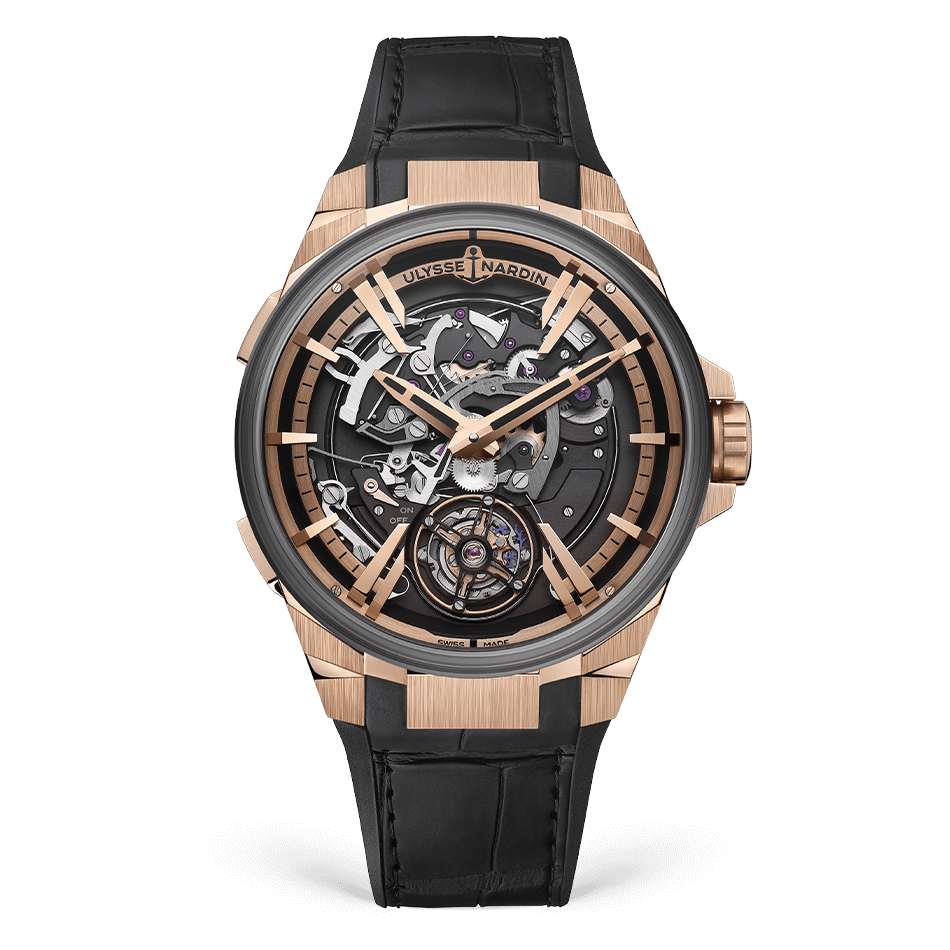 Ulysse Nardin has long been a master at repeaters and striking watches. Now, it takes its knowledge to new heights with the Blast Hourstriker with chiming mechanism visible on the dial side. Several years in the development, the new 330-part UN-621 mechanical caliber is Ulysse Nardin’s first in-house automatic striking movement to be powered by the automatic flying tourbillon with a silicon hairspring, anchor, and escape wheel. There is also a manual winding source for the chiming of the watch in addition to the time tracking aspect. The watch chimes the time every hour and half-hour automatically or on demand. A double X is cut into the case back to act as a speaker that enriches the sound of the 45mm black DLC titanium case with 18-karat rose gold accents.  It retails for $104,400. 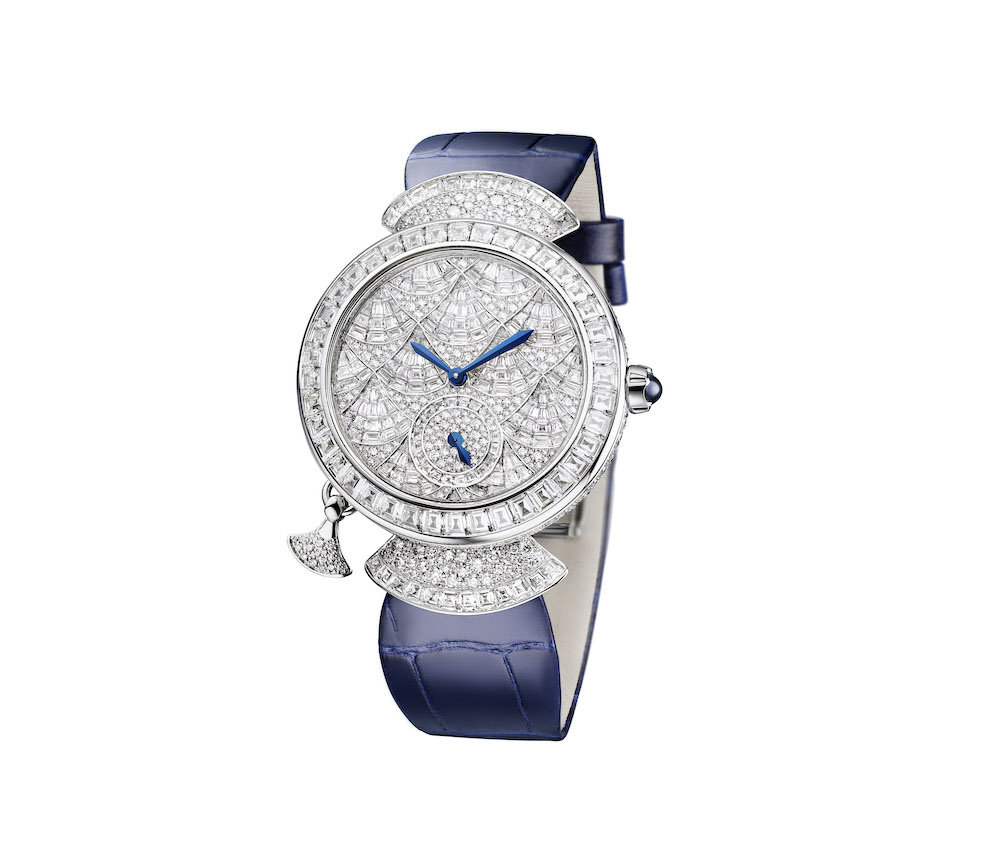 The Roman house of Bulgari is inspired by its rich jewelry roots and remains true to women with its round Diva watches. The newest versions in 2021 were in the Divina collection and offer a grand mosaic of diamonds and gemstones set into the dials and cases.  One of the versions is the newest 37mm 18-karat white gold Divina Mosaica Minute Repeater  that is entirely set with 689 brilliant- and baguette-cut diamonds weighing 11.6 carats. Each stone is individually set by hand over the course of hundreds of hours of craftsmanship. The repeater watch houses a mechanical movement that chimes the time on the hour, the quarter hours and the minutes past the quarter hours. The watch is finished with a blue cabochon-cut sapphire for the crown and a blue alligator strap. 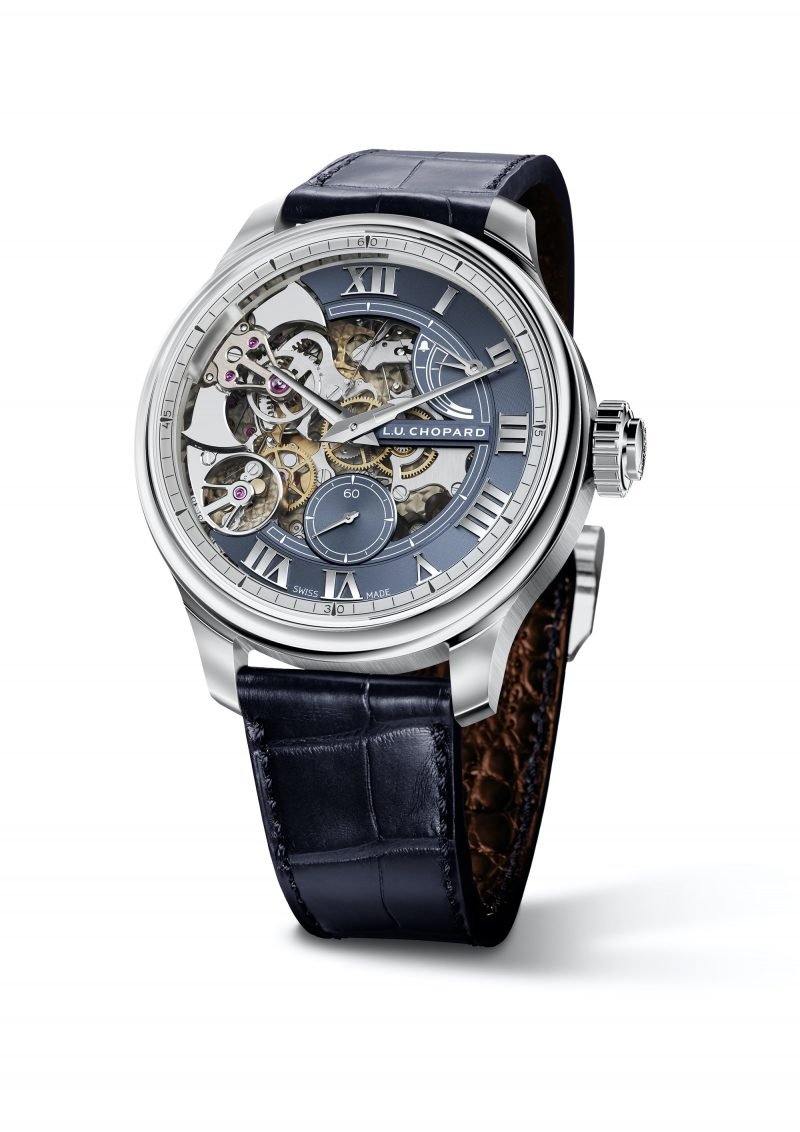 Part of its coveted L.U.C collection of mechanical watches, Chopard’s newest  watch is  created in a limited edition of just 20 pieces.  Measuring 42.5mm in diameter, the watch is powered by the in-house-made L.U.C 08.01-L mechanical movement with 60 hours of power reserve.  It retails for $277,546. 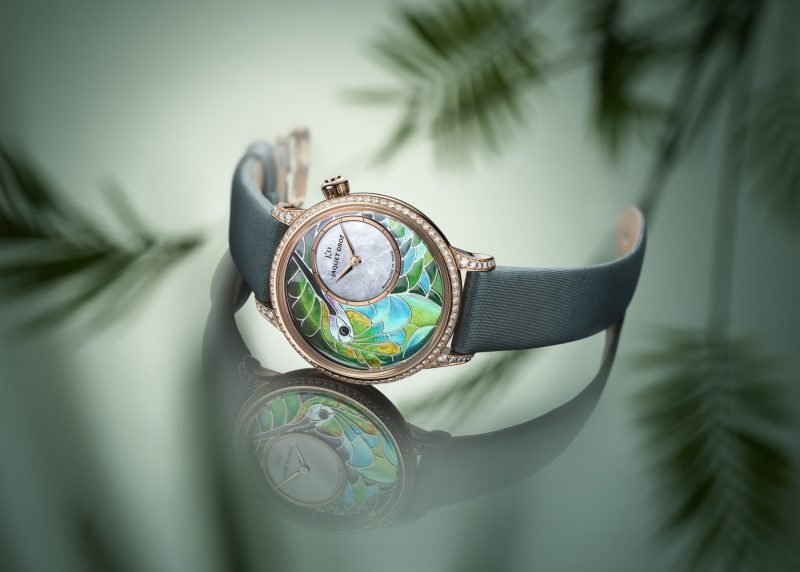 This stunning Petite Heure Minute Smalta Clara Hummingbird watch by Jaquet Droz combines incredible Métiers d’ Arts with the melodious sound of time. The dial of the 35mm watch is created using a special enamel technique called Flinque’ with translucent layers that create depth and dimension. The watch is powered by an in-house automatic movement, Jaquet Droz caliber 6150 with 38 hours of power reserve. It is built in a limited edition of just eight pieces, each retailing for $54,600.