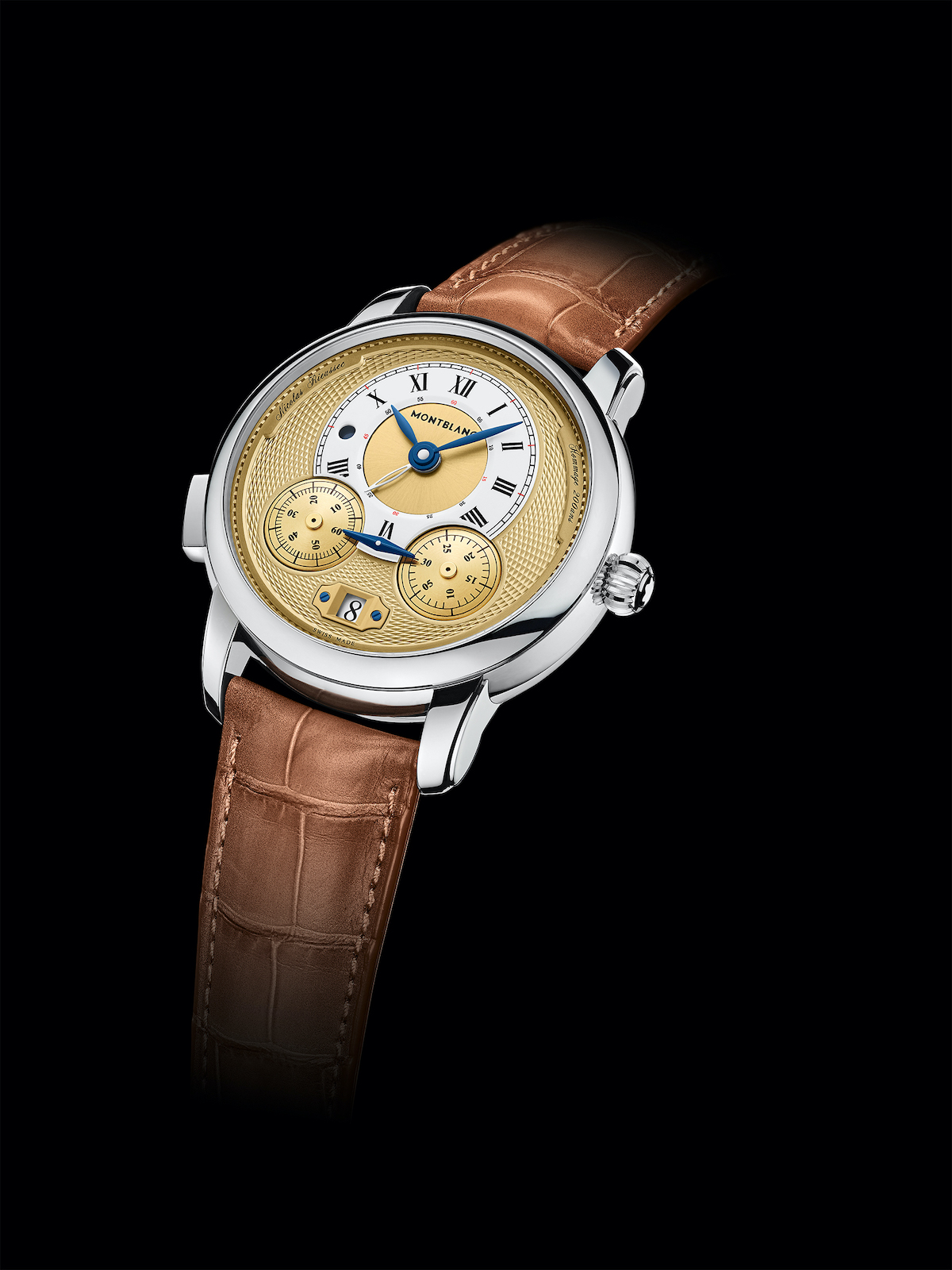 Before word got out that the chronograph was actually invented by Louis Moinet, it was widely believed that Nicolas Rieussec invented the chronograph in 1821. In fact, Rieussec invented what is referred to as the “time writer” — an inking chronograph. Essentially, two dial disks were put in place in a box and were connected with a small ink pen of sorts that would mark the start of an event on one disk and the finish time of the event on second small disk.  The ink writer was the inspiration behind Montblanc’s Star Legacy Nicolas Rieussec Chronograph collection. Now, in honor of the 200th anniversary of that inking chronograph, the brand releases the new Star Legacy Nicolas Rieussec Chronograph Limited Edition 200 watch.

It was on September 1, 1821, that Rieussec’s timing device was put to the test, as the sixth royal watchmaker to the king of France tested his chronometer at the Champ-de-Mars Arrondissement de la Seinie horse races.  The device not only measured the time it took the winning  horse  to travel the  distance, but also the other horses,  as well. The fixed “nib” would place a black ink mark on the two rotating counters as soon as each horse crossed the finish line. When he later presented his invention to the Academy of Sciences in Paris, they called it a chronograph for the Greek words “chronos” (time) and “graphein” (write). With that, Rieussec became the inventor of the first inking chronograph. 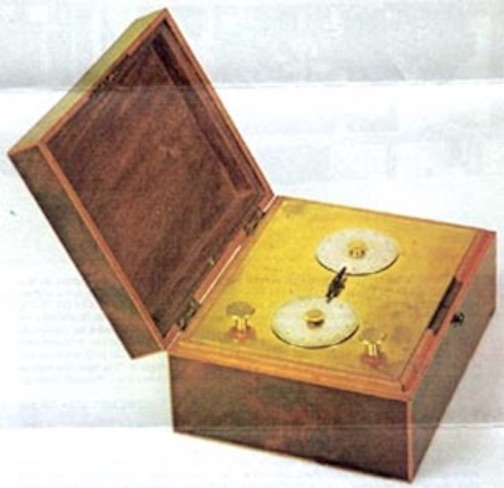 The new Star Legacy Nicolas Rieussec Chronograph LE 200 watch, released today, boasts a dial design that deftly recalls the original inking instrument, complete with two rotating chronograph disks aligned horizontally on the dial with a fixed double index hand. The dial is created in a golden hue to resemble the original inking machine but with remarkable modernity.  Essentially, the dial is built on multiple levels and consists of six different parts. The base of the dial forms the background for the off-center time dial and features a striking guilloche’ pattern.

The two gold-colored chronograph subsidiary dials (60 second counter on the left and 30-mniute counter on the right) are inset into the base and a blued double-sided hand is fixed above them. Centered beneath them at 6:00 is a date aperture and at 12:00 the hours and minutes are displayed using blued hands and a metal domed chapter ring finished in white lacquer with Arabic numerals. A silver-hued open-worked hand points to a second time zone and there is a day/night indicator aperture at 9:00 on the chapter ring. Two plaques  on the outer edge of the background, one each engraved with Nicolas Rieussec and Homage 200 ans (200 years). 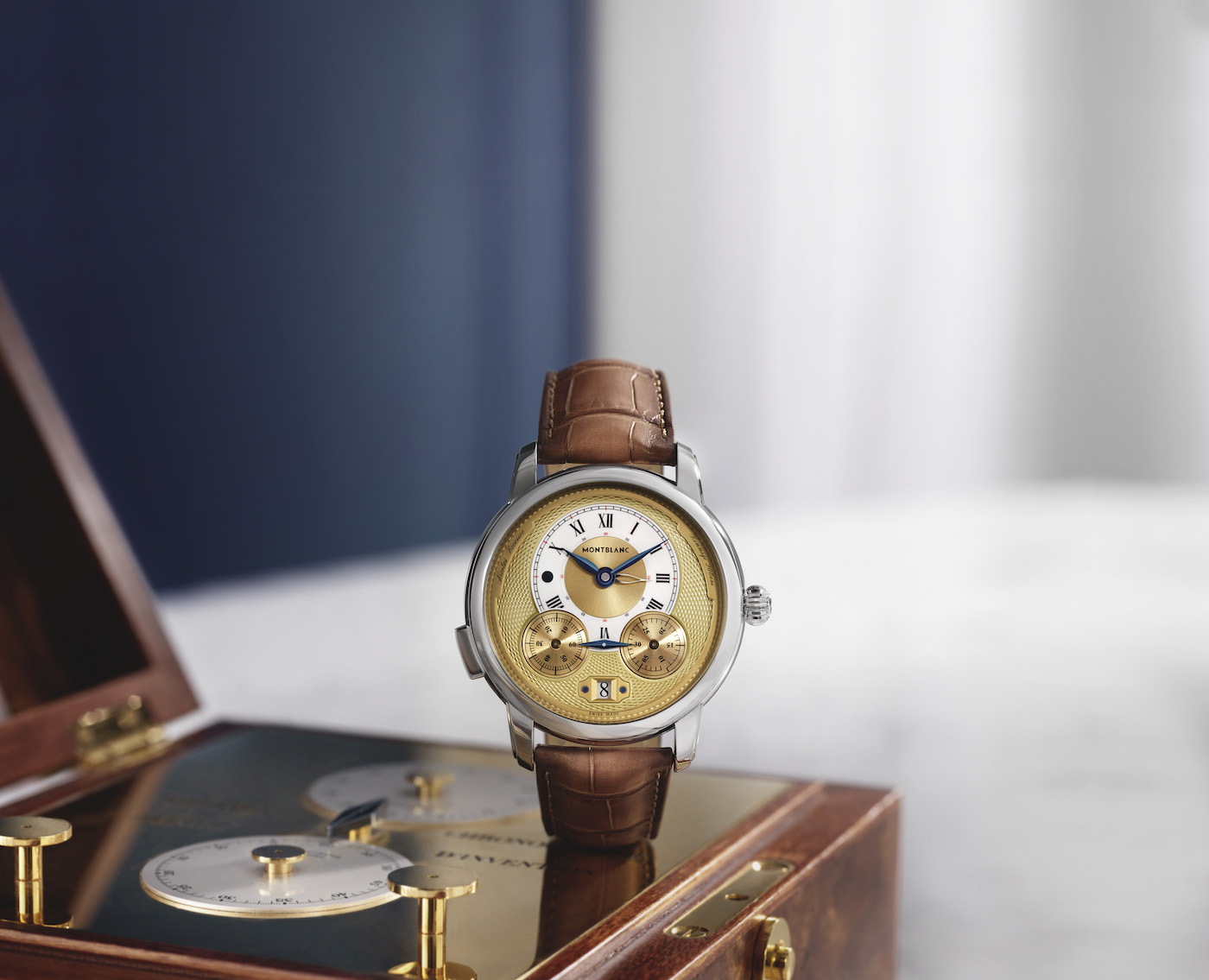 The watch is powered by the brand’s caliber MB R200, which has been totally reworked for this watch. The automatic monopusher chronograph boasts a complex column wheel chronograph with a vertical disk clutch that engages and disengages the chronograph functions. Thanks to two barrels, the watch has a power reserve of 72 hours. Additionally, the monopusher for the chronograph is placed at 8:00 on the case side for better ergonomics when using the timer. The movement is visible via a transparent sapphire case back and the oscillating weight is colored old with the same grain motif guilloche as the front dial background. The 44.8mm stainless steel watch is created in a limited edition of just 200 pieces, each retailing for $8,700. 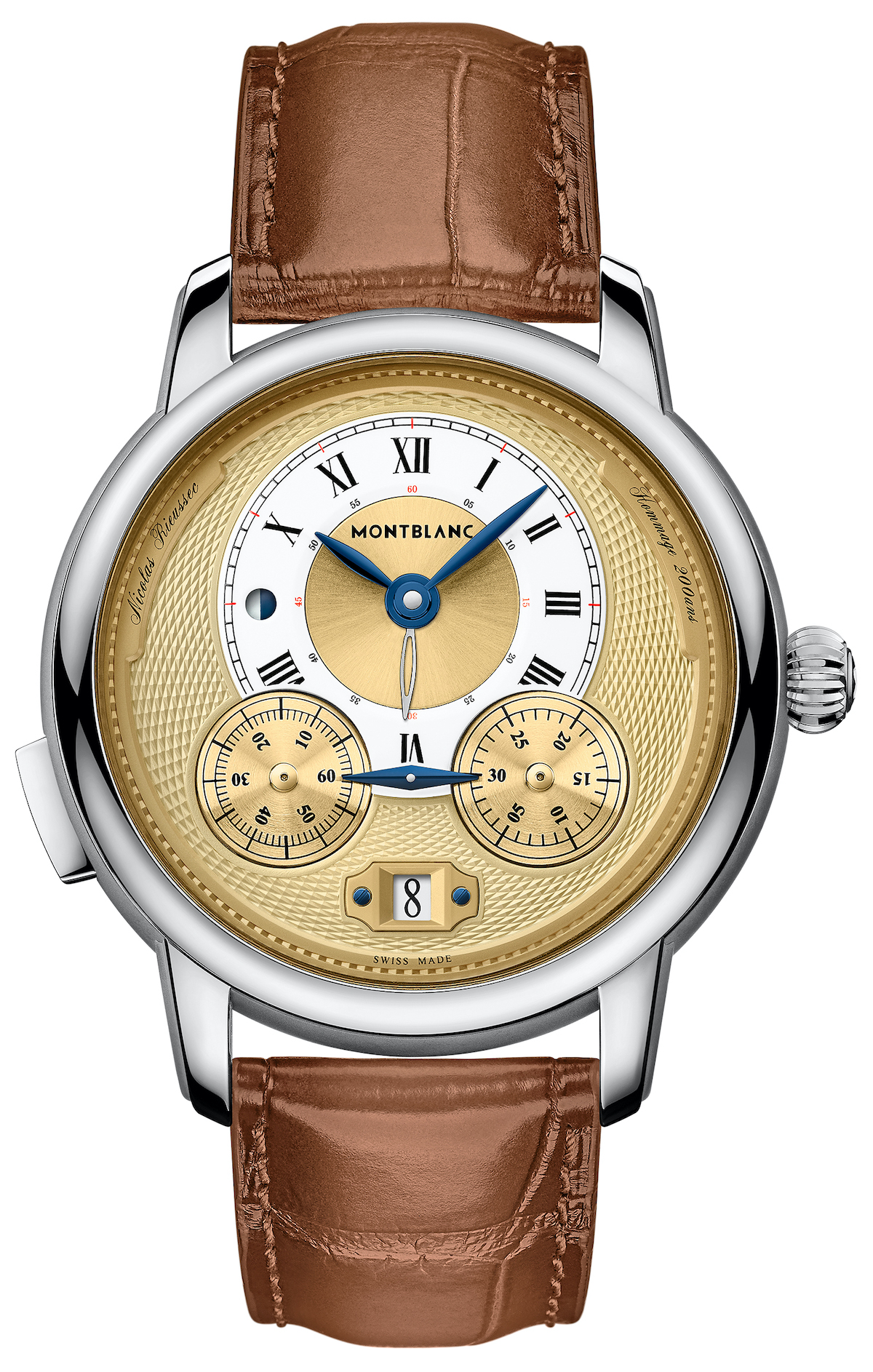